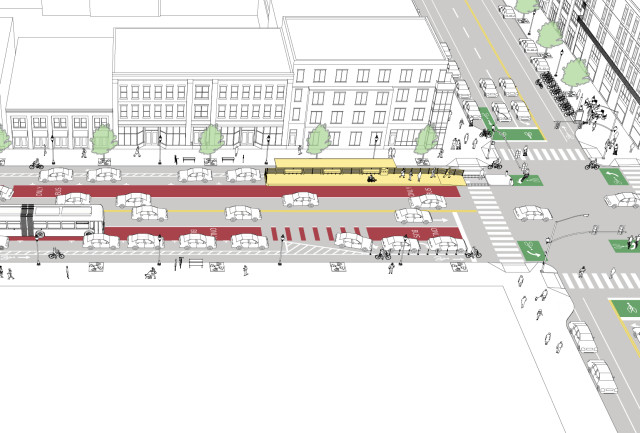 Offset transit lanes—running between a parallel parking lane and a general through-traffic lane—can be applied to a wide variety of streets. Often implemented through simple lane conversions, offset bus lanes are shown here on a wide two-way street characteristic of downtown thoroughfares and multi-modal corridors. Dedicated offset lanes are a core part of the transit toolbox for urban streets. Offset transit lanes provide priority space for frequent or high-volume transit service, a variety of curbside uses and turning movements, and a comfortable sidewalk environment.

On this street, the right lane in both travel directions has been designated as a bus lane, reducing transit delays due to general queues and improving reliability, especially at peak periods.

Frequent, tiered service is provided on this street, with local and rapid service sharing the transit lanes. High transit volumes (up to about 20 buses per hour) are compatible with this street configuration. Somewhat higher volumes can be accommodated by prohibiting turns and increasing the number of local pull-out stops where rapid service can bypass the local route.

At rapid service stops, in-lane stops are provided. Rapid/local stops can be near- or far-side but should be on the same block where possible to provide legibility to passengers. If streetcars are used for local service, provide far-side in-lane stops, allowing a rapid bus to pass in the second lane. Tiered stops can provide pull-out bays for local service, allowing the rapid to pass the local.

Right turns are prohibited or managed where a near-side stop is provided.

At intersections where left turns are permitted but infrequent, and there is a far-side stop or no stop, the transit lane can be dropped at the approach to allow general traffic through movement in the right lane when no bus is present.

Dedicated phases or turning restrictions for left- and right-turning movements across the bike and transit lanes reduce conflicts and improve through movement for transit and general traffic.

If block length and local stop spacing are similar, local stops can alternate near- and far-side to avoid double-stopping at red signals.

At intersections with a high left-turn volume, the transit lane and adjacent traffic lane can be bent towards the sidewalk to create a left-turn pocket.

Curbside management improves the effectiveness of this offset lane conversion. Truck loading zones and priced parking reduce the incidence of double-parking, but high parking turnover can also result in transit delays. Providing other curbside uses along the corridor, including parklets and islands at stops and crosswalks, can reduce parking maneuver delays and improve pedestrian visibility by clearing the transit lane near intersections (refer to the Urban Street Design Guide for additional guidance on refuge islands, curb extensions, and parklets).

Lane enforcement, ideally automated enforcement, is indispensable in areas with high parking demand, as offset lanes are susceptible to blocking by double-parked vehicles and deliveries.