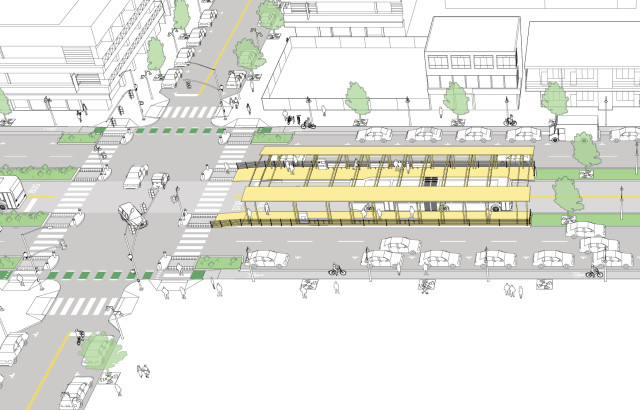 Wide highway-like arterial streets leading out from the city center, often with lower-density commercial development, are ideal routes for trunkline BRT or LRT lanes. With attention to the human environment and mixed-use zoning, these corridors can be transformed into active neighborhoods anchored by transit.

The median, left lanes, and left turn lanes of this formerly 7-lane street have been redesigned to serve an at-grade center busway, with right-boarding stations on the medians. Stations have been kept together to ease multi-directional transfers and reduce walking distances and crossings to access new buildings.

A fully separated at-grade right-of-way provides for expedient transit service with few delays, even on the busiest streets.

Stations are in the median, requiring careful planning around stop location and pedestrian access. Intersections without stations must also be designed for safe crossings, with the same low-speed turn radii and refuge areas that are provided at stations.

Pedestrian safety and access have been substantially improved by cutting in half the maximum crossing distance between refuges and reducing top vehicle speeds to 25–30 mph. At station intersections, crossing distances are cut to a maximum of 24 feet by prohibiting left turns. Raised parking-protected cycle tracks, offset from right turns by refuge islands, provide a high-comfort, high-volume bicycle facility.

The configuration shown has right-boarding platforms, allowing the use of a wider range of buses. Open median boarding platforms can be uncomfortable for passengers if fast, high-volume traffic is present, especially where platform width is constrained, or where pedestrian crossings are distant. Large semi-enclosed stations, as well as mature trees where available, improve passenger waiting conditions and the attractiveness of transit.

Left turns are a primary operational concern on a street of this scale, and should be either prohibited or provided only during protected signal phases. Left-turn prohibitions are preferred at intersections with stations. If left turns must be accommodated at stations, right-side platforms can be staggered across intersections to create far-side stops with room for turn lanes near-side.

Left-turn lanes are separated in time (with leading and lagging or split phases), and turning paths are guided by markings. Vehicles turning from cross streets are directed into the receiving lane with intersection markings, including red color at the transitway entrance.

Implement this design along with active transit signal priority, or pre-time the signals along the corridor to account for typical dwell time.

Require sidewalk improvements and reduce the number of driveways during redevelopment.