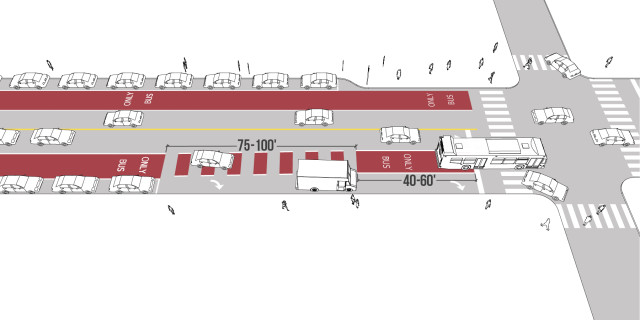 Where right-turn volumes are high enough to interfere with transit operations but cannot be prohibited, providing a right-turn pocket to the right of the through transit lane reduces bus and streetcar delays.

Right-turn pockets should be considered only after other alternatives are exhausted, since they lengthen the time needed for safe pedestrian crossings, preclude the use of near-side curb extensions, and use valuable curbside space.

At intersections with high right-turn volumes on streets with a dedicated offset transit lane, or with substantial transit volume.

Applicable to buses and streetcars. At low speeds, applicable with multi-unit rail vehicles.

Apply only where impacts to the pedestrian realm can be avoided. Right-turn pockets should generally not be carved from existing sidewalks, as would be necessary for use with curbside transit lanes.

Where right turns must be accommodated but would delay transit vehicles if present in the transit lane. At locations with high pedestrian crossing volumes and little offset distance, even low right-turn volumes can be problematic for transit.

Where a protected bike lane or raised cycle track exists to the right of the transit lane and/or curbside parking.

Usually requires the removal of several parking spaces or other curbside uses.

While a right-turn pocket may prevent vehicle queuing in the transit lane, ensure transit operations are not hindered by merging movements. 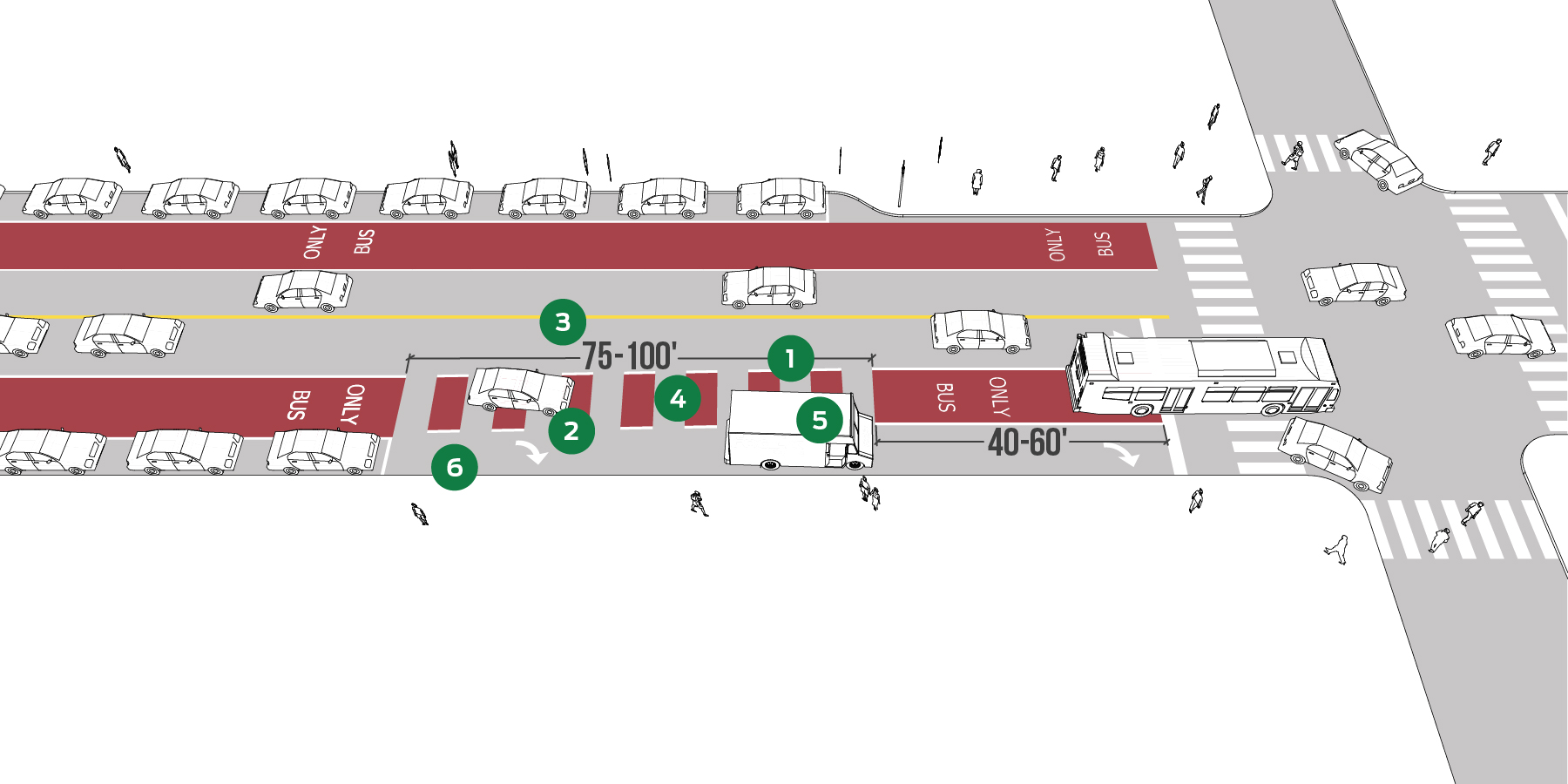 A white skip line must be marked on both sides of the transit lane to indicate that vehicles may transition across it.

The right-turn pocket should be provided to the right of an offset transit lane with a transition treatment to allow vehicles to cross the dedicated transit lane.

Red dashed bars, large red squares, or elephant’s feet should be provided in the transition zone, consistent with the white skip lines, to emphasize that transit vehicles retain priority use of the lane.

The turn pocket should be 10–11 feet wide if routinely used by trucks at peak periods. 9 feet of width may be sufficient if passenger cars are the primary form of turning traffic at peak periods.

Pre-existing turning conditions should be observed carefully prior to design to ensure that transit vehicles can pass at peak transit-demand periods, often corresponding to peak queue periods.

Turn pockets should accommodate the longest routinely occurring queue, but should be no longer than necessary to clear blockages from the transit lane. All but the first 30 feet of the transition zone can be considered as part of the storage length, as peak traffic will transition extremely slowly.

Right-turn lanes can be used where general through-traffic is prohibited, requiring all private traffic to turn. Where transit transitions into a contraflow lane where all private vehicles are required to turn, it may be appropriate to transition right-turning traffic to a pocket and continue the transit lane through the intersection.

Transit lanes can be shifted to the left to create a longer right-turn lane. In this case, the transit lane functions like a transit approach lane. This configuration also permits the implementation of a boarding island between the transit lane and the turn lane.

For streets without transit lanes, a right-turn pocket can be paired with a short transit lane section at the intersection approach.