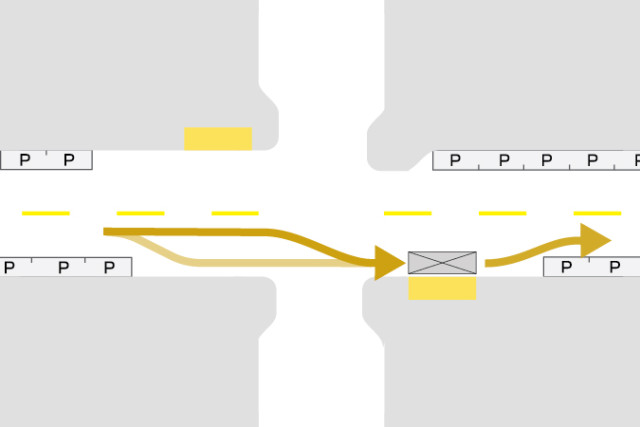 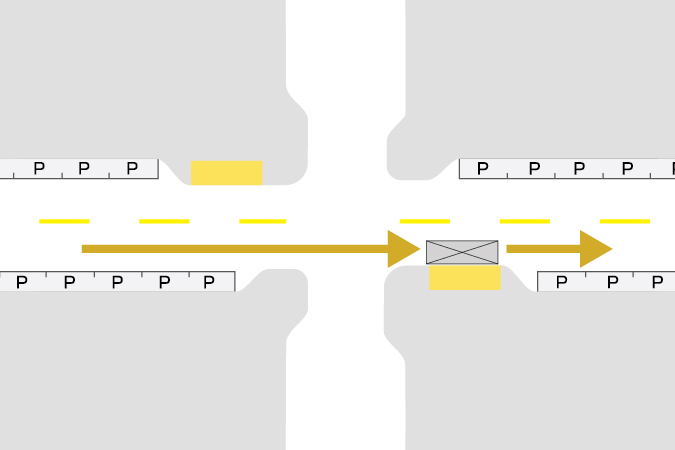 In-lane stops at the far side of an intersection confer the highest priority to transit operations at most signalized intersections.

Far-side in-lane stops are generally the preferred stop configuration where transit lanes or transitways are present.

Continue bike facilities behind the stop.

By allowing buses to move in a straight line, in-lane stops eliminate both pull-out time and traffic re-entry time, a source of delay and unreliable service. In-lane stops are especially valuable on streets operating at or near vehicle capacity, or on streets with long signal cycles, in which transit vehicles may experience long re-entry delays while waiting for traffic to clear.

Assuming buses require a 7-second critical gap to remerge, each 100 vehicles per hour in the adjacent travel lane adds roughly a second of delay-—100 vph adds 1 second of delay, 500 vph adds 4 seconds, and 1,000vph adds roughly 12 seconds of delay on remerge. The TCQSM also assumes a pull-in maneuver requires 3.3 seconds, equating to more than 15 seconds of additional dwell time on a street with 1,000 vph where the bus is required to pull-out to stop.

Far-side stops support the use of a broad array of active transit signal priority treatments with relatively simple infrastructure, since transit vehicle approaches can be anticipated based on typical approach speeds.

On single-lane streets where in-lane stops are most needed, far-side in-lane stops in mixed traffic may result in traffic behind the bus spilling back into the crosswalk and intersection. At these locations, provide a longer far-side stop that accommodates queued vehicles behind the stopped transit vehicle, or activate an early red phase after the transit vehicle clears the intersection. 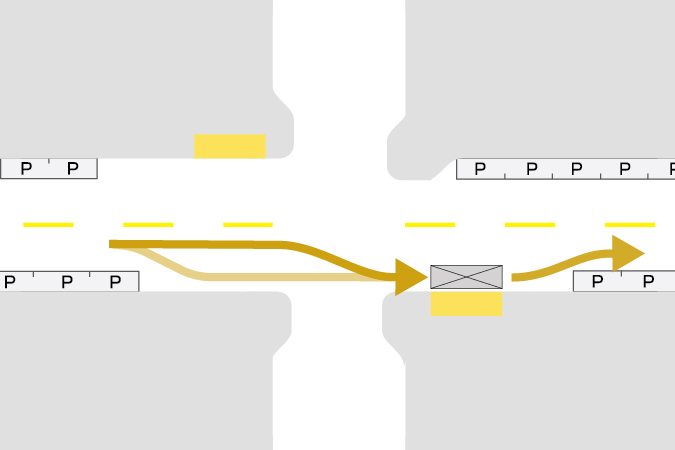 Far-side pull-out stops use intersection space efficiently, with little impact on general traffic if they are wide enough for a bus to pull completely out of traffic. Among pull-out configurations, far-side stops are preferred.

A far-side pull-out configuration shortens the transition distance needed along the stop platform. Buses can shift to the right while crossing the intersection.

A periodic pull-out stop on streets with primarily in-lane stops allows vehicles to pass while a bus is stopped.

Buses may be significantly delayed in re-entering the travel lane on high-volume streets. On routes where buses have difficulty merging back into traffic, buses often pull out of the travel lane only partially to avoid being blocked.

Additionally, in constrained situations, buses may also be compelled to pull in so that the front and back of the bus overhang the sidewalk on entry and exit, creating a hazard for pedestrians.

Pull-out stops can be used for local stops adjacent to offset or curbside transit lanes to allow rapid services to pass local services.

Traffic modeling was used to demonstrate that moving a stop from near- to far-side alone changed travel times more than 4%; implementing with TSP and a queue bypass lane further amplified travel time reductions with the far-side configuration. 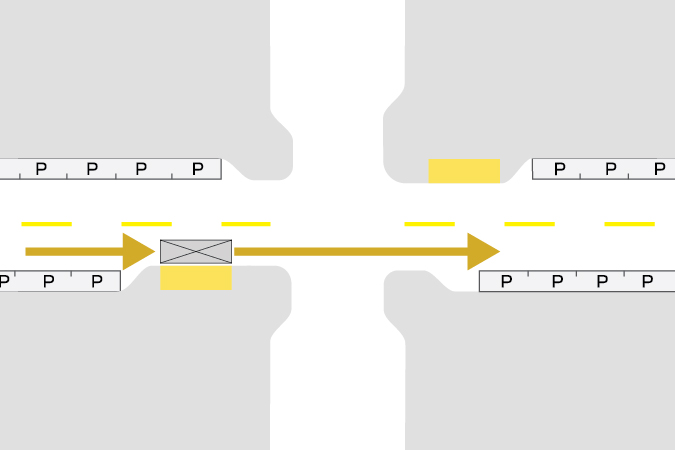 Near-side stops at the approach to an intersection can facilitate in-lane stops in mixed-traffic lanes, where turning movements and queued vehicles behind transit vehicles do not block the intersection.

At stop-controlled locations with only one travel lane in each direction, near-side in-lane stops eliminate “double-stopping.”

Where a high volume of vehicles turn onto the transit street, locating a stop near-side keeps the far side of the intersection clear to receive turns.

Where very high right turn volumes are present, an in-lane stop can be located on an island between the transit lane and right turn lane.

If a large number of vehicles turn behind the stopped transit vehicle at a far-side location, they will likely block the intersection, resulting in traffic congestion and delay.

Continue bike facilities behind the stop.

When applied with transit signal progressions, near-side and far-side stops can be alternated to reduce intersection delay. 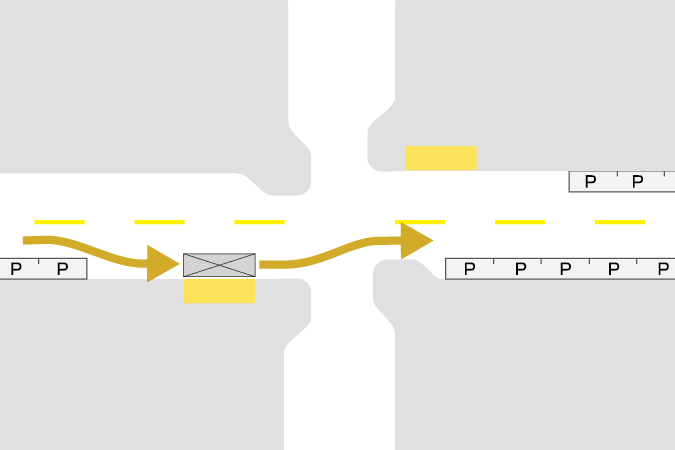 Buses may have significant difficulty re-entering the traffic stream. Signal measures, such as upstream early red phases, can address this issue.

Near-side stops can be used to facilitate transfer between two intersecting routes.

A near-side pull-out stop should be set back from the crosswalk at least 15 feet. Stops located just before the crosswalk can block the visibility of pedestrians.

Except for transfer points, near-side pull-out stops are not generally preferred on multi-lane streets, but may be applied if a major near-side destination exists, or if problematic conditions such as driveways or missing sidewalks exist at the far-side location.

In cities with yield-to-bus/yield-to-streetcar rules and high compliance, broader implementation of near-side pull-out stops is possible.

Place near-side stops close enough to the intersection that right-turning vehicles cannot merge in front of the bus.

Near-side stops present challenges at intersections with transit route turns. If buses are required to turn right from the curbside, provide a signal phase for the transit movement, or design the cross street to accommodate a vehicle sweeping across the second lane or the oncoming lane. 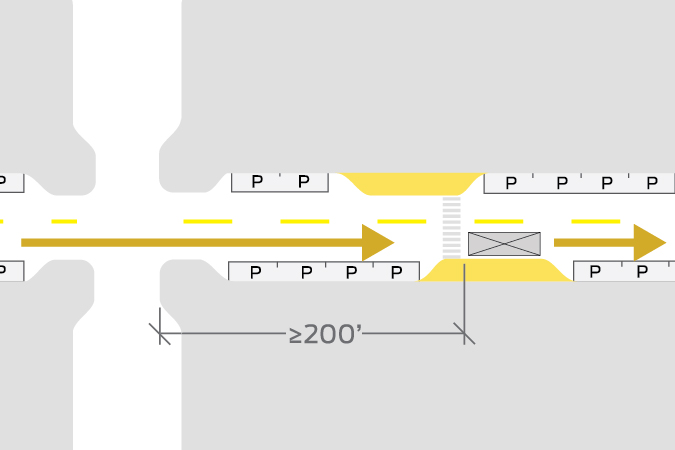 Signalized or traffic-calmed pedestrian crossings should be provided at mid-block stops.

Continue bicycle facilities behind the stop. 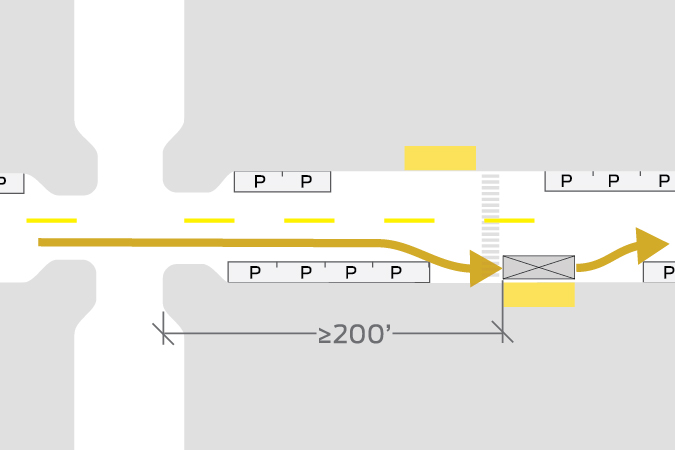 Mid-block pull-out stops are located more than 200 feet from intersections, and provide destination access on long blocks with mid-block crossings.

Use mid-block stops where traffic conditions at intersections would create safety issues for stopping buses or riders.

Ensure that adequate curbside space exists to maneuver buses in and out of stops.

Signalized or traffic-calmed pedestrian crossings should be provided at mid-block stops.

Where safe pedestrian crossings cannot be provided, mid-block stops are a last resort.