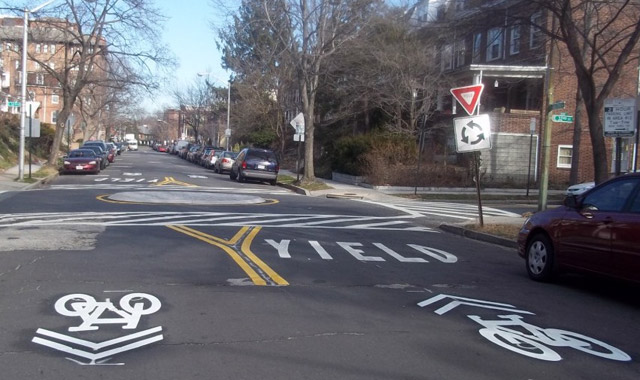 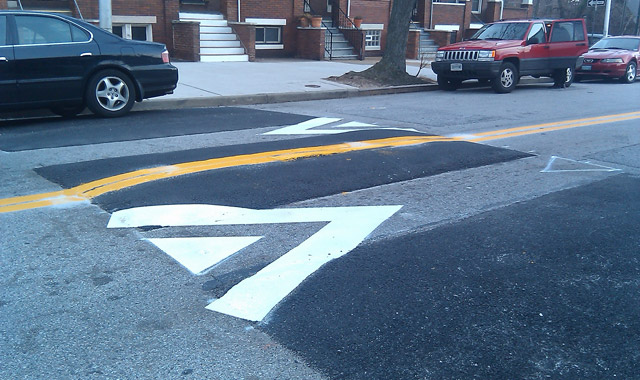 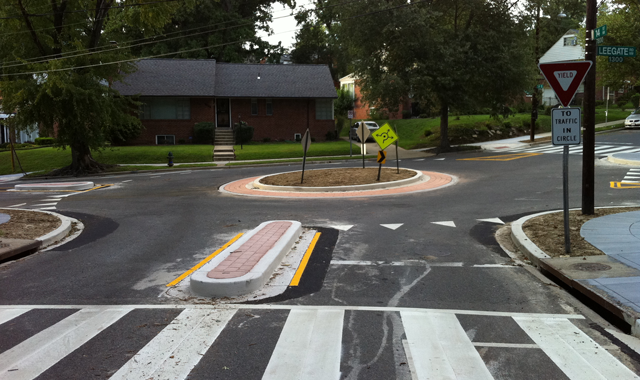 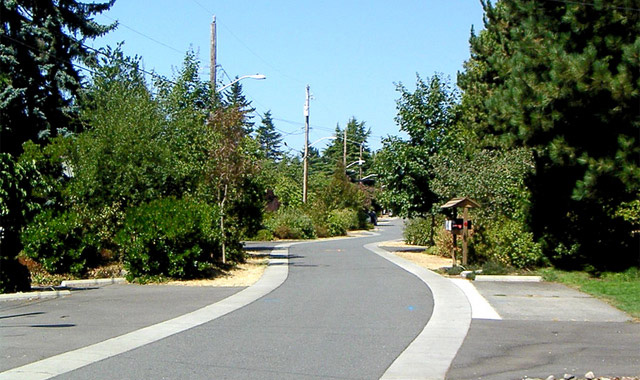 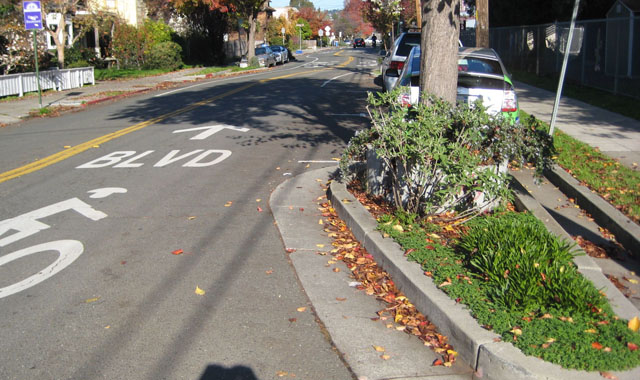 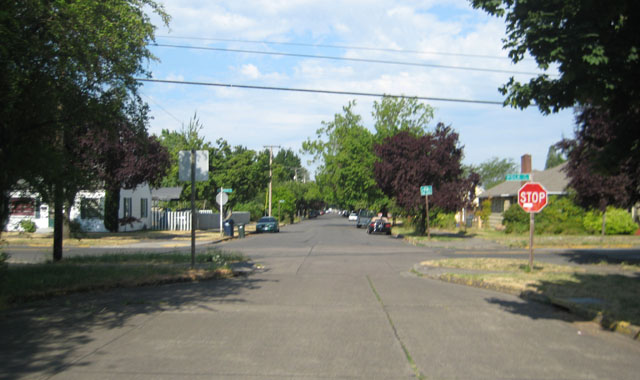 Neckdown - Eugene, OR
This neckdown narrows the roadway, requiring motorists to pass one at a time. 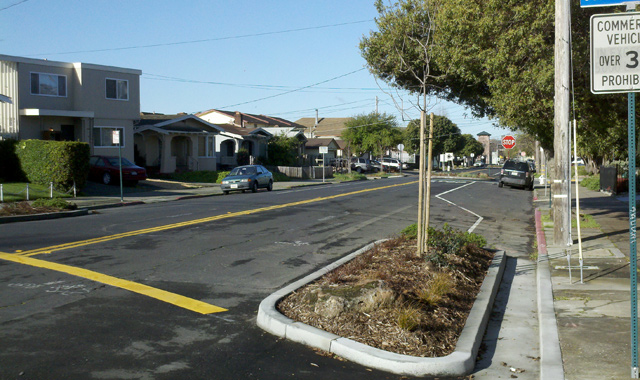 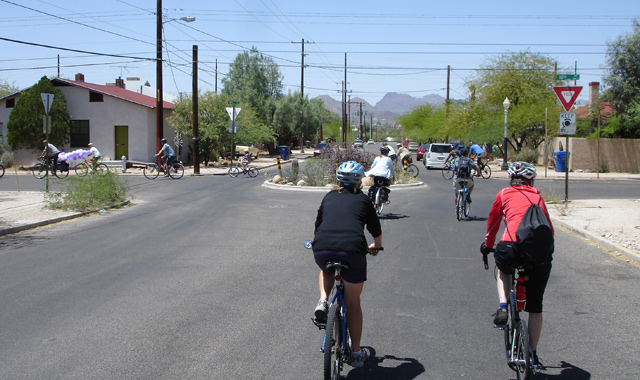 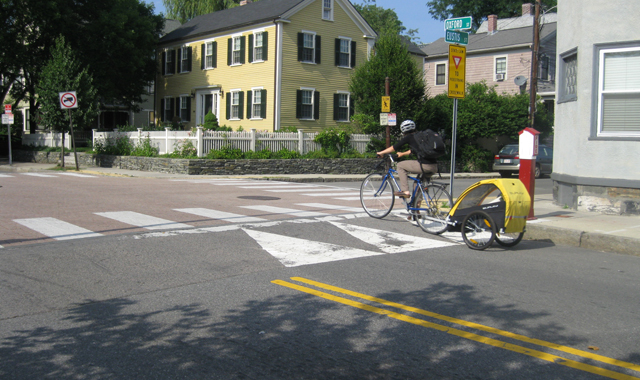 Raised Intersection - Cambridge, MA
Raised intersections such as this one at Oxford and Eustice Streets cause motorists to slow down while improving visibility for pedestrians in the intersection. 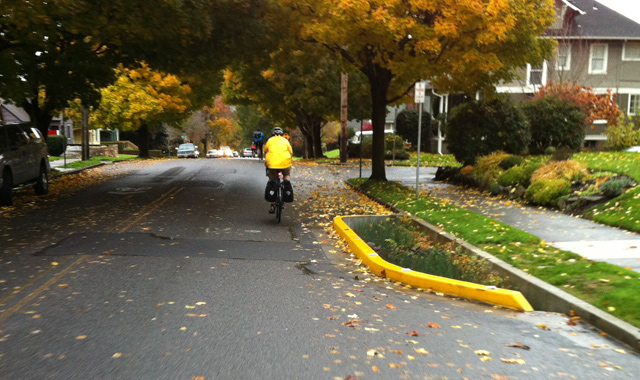 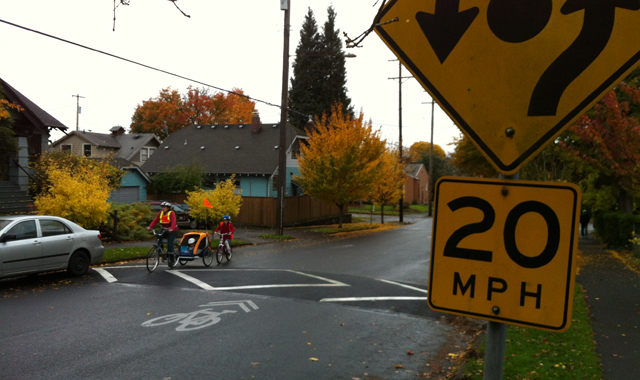 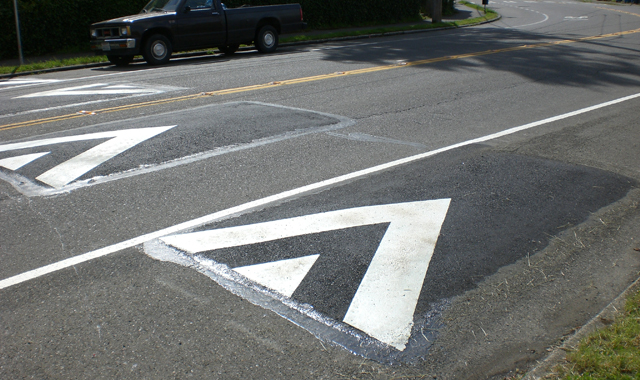 Speed Cushion - Seattle, WA
Speed cushions can allow bicyclists and emergency vehicles to pass through while acting as a speed hump to passenger cars. Photo: City of Seattle 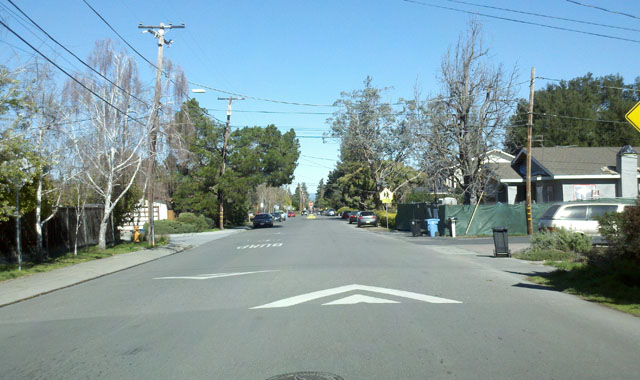 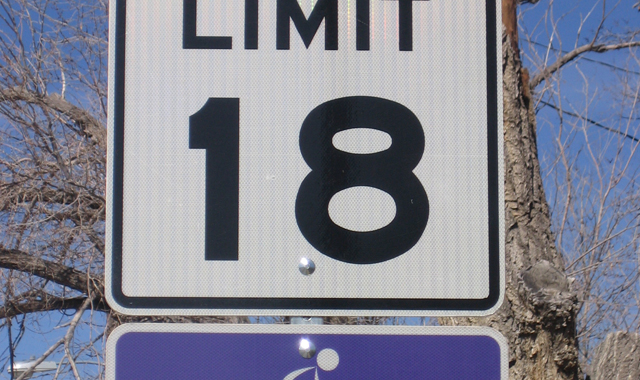 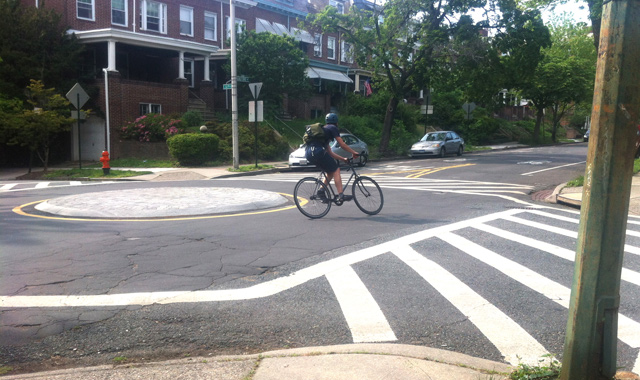 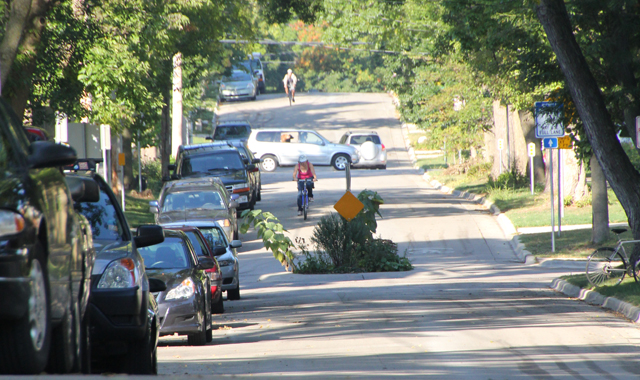 Mini Traffic Circle - Madison, WI
Parking should be prohibited on the approach to mini traffic circles to maintain sight lines. 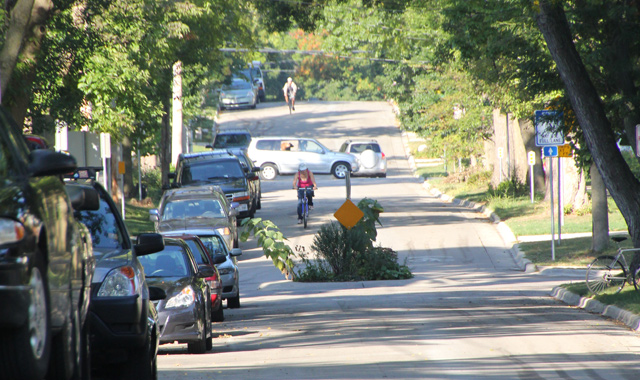 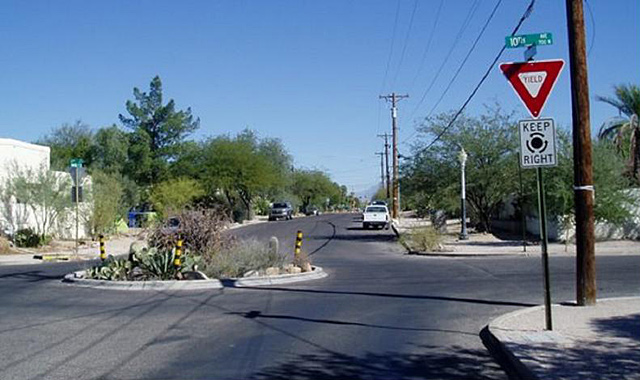 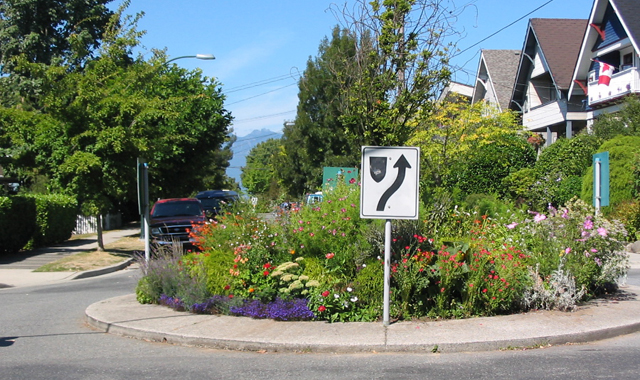 Speed Management measures for bicycle boulevards bring motor vehicle speeds closer to those of bicyclists. Reducing speeds along the bicycle boulevard improves the bicycling environment by reducing overtaking events, enhancing drivers’ ability to see and react, and diminishing the severity of crashes if they occur. Speed management is critical to creating a comfortable and effective bicycle boulevard.

Streets developed as bicycle boulevards should have 85th percentile speeds at 25 mph or less (20 mph preferred). Speed management (traffic calming) measures can be divided into vertical or horizontal features. These measures can be implemented individually or in combination to increase their efficacy. Common combinations include raised crosswalks with pinchpoints, raised intersections with pinchpoints, and speed humps with center island narrowings, chicanes, or pinchpoints.
Read More+

Bicycle boulevards should have a maximum posted speed of 25 mph. Some jurisdictions are starting to sign residential speed limits below 25 mph. Simply changing the speed limit is unlikely to reduce speeds; speed management and street design techniques are necessary. Once actual speeds decrease, lower speed limit signs can reinforce the desired speed with regulatory control. Targeted enforcement is also recommended.

Reduced speed limits may require authorizing legislation. The MUTCD designates that speed limits shall be in increments of 5 mph and requires an engineering study to reduce the speed below the statutory speed for the type of roadway. In some jurisdictions, speed limits may be reduced beyond the statutory residential speed limit. State statutory limits might restrict the maximum speed limit that can be established on a particular road. Read More+

As of 2012, Oregon cities have authority to lower the speed limit on residential streets to 20 mph if the road has an average volume less than 2,000 vpd, an 85th percentile speed of less than 30 mph, and if there is a device (e.g., shared lane markings, warning signs) that indicates the presence of bicyclists or pedestrians. City of Portland staff intend to sign all residential neighborhood greenways that meet these criteria at 20 mph and have begun implementing speed management measures to create streets with target speeds of 20 mph in anticipation of the lowered speed limit.

Albuquerque, NM, signs bicycle boulevards at 18 mph but has not used speed management to reduce the streets’ speeds. Targeted enforcement is used when a bicycle boulevard first opens, and electronic speed feedback signs reinforce the speed limit to drivers.

In California, the prima facie speed limit in residential areas is 25 mph, which is the lowest speed limit allowed allowed, with specific exceptions. In order to enforce speed using a radar, a city must conduct a speed survey to justify the speed limit. Cities can post advisory speeds, such as a triangular, yellow 15 mph sign with a speed bump warning sign.

Vertical speed control measures are composed of wide, slight pavement elevations that self-enforce a slower speed for motorists. Note: the type of narrow, abrupt speed bumps used in private driveways or parking lots are not recommended for public streets and are a hazard to bicyclists. Some examples of recommended speed management treatments include the following:

Horizontal speed control measures cause motorists to slow down in response to either a visually narrower roadway or a need to navigate a curving travel lane. Where traffic calming features do not extend beyond the parking lane, they visually narrow the road and improve the approaching bicyclists’ view of cross traffic, but do not act as speed management. When motor vehicle speeds are already below target thresholds, elements can either extend into the travel lane or narrow a bi-directional street to a single lane. Under these conditions bicyclists are comfortable taking the lane and overtaking cars do not encroach on bicyclists’ space. Where possible, provide sufficient space for bicyclists to pass around the outside of the elements.

Examples of horizontal deflection include the following:

Horizontal speed control measures should not infringe on bicycle space. Where possible, provide a bicycle route outside of the element to avoid bicyclists having to merge into traffic at a narrow pinchpoint. This technique can also improve drainage flow and reduce construction and maintenance costs.

Many cities in the U.S. have neighborhood traffic calming programs or public works departments that have installed speed humps or traffic circles. Cities that have designated bicycle boulevards have implemented a variety of speed management treatments. Just greater than half of the jurisdictions with traffic calming programs surveyed for the U.S. Traffic Calming Manual (Ewing, 2009) use trial installations to test speed and volume management techniques.