At the largest scale, transit network design is a powerful tool that affects every aspect of a transit system and the daily lives of its passengers.

In large cities, transit networks are almost always multi-modal, with a wide variety of service types and even multiple network patterns. In an effective transit system, these modes connect and complement, rather than duplicate, one another. 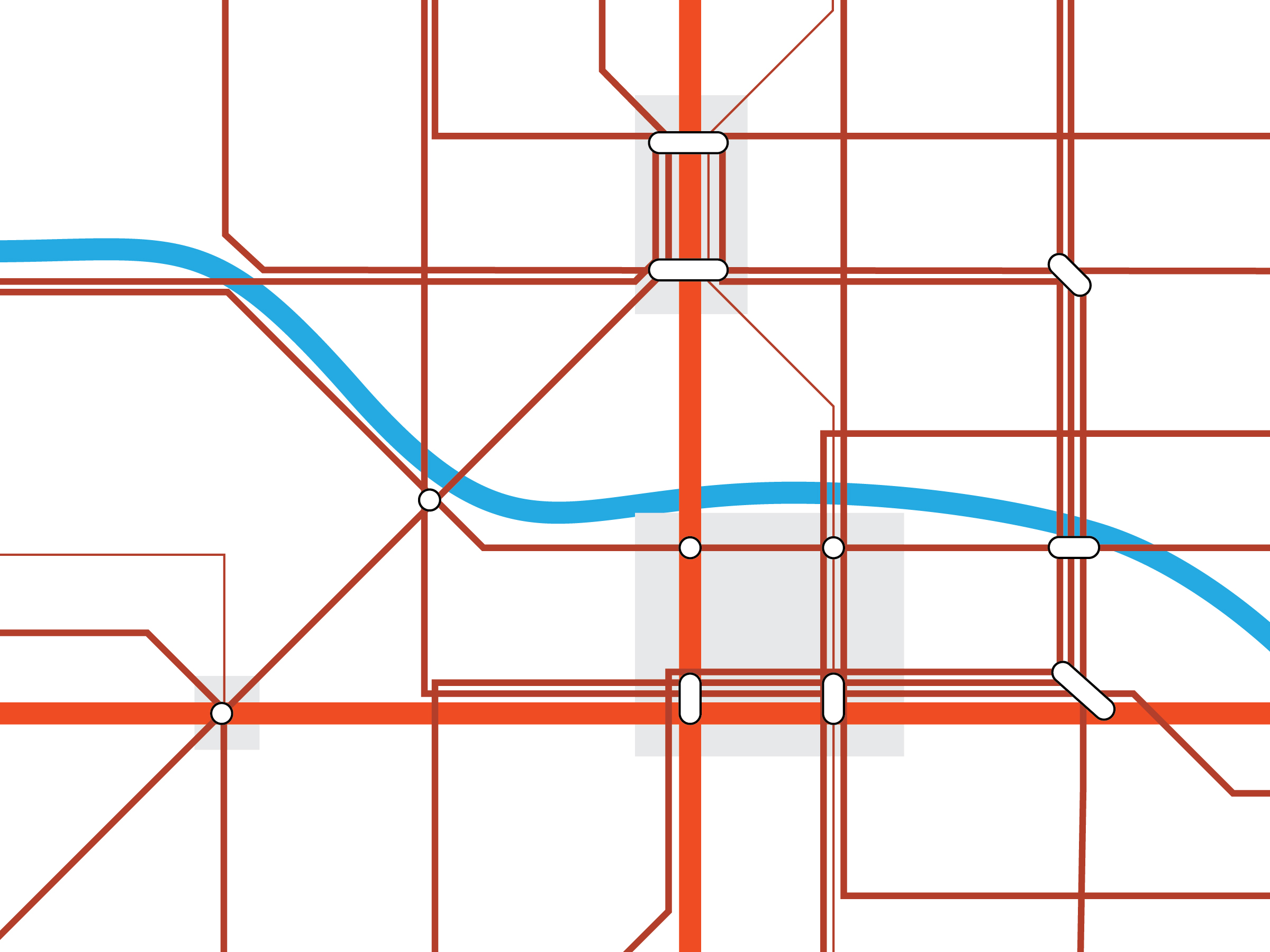 Operations in these systems strongly favor the trunklines, resulting in frequent or high-volume bi-directional service along these routes but much less frequent service to other locations.

Local routes on neighborhood streets benefit from comfortable stops, system information and branding, and other integration with the broader system.

Cities with both buses and a dedicated-right-of-way rail system have historically structured the former primarily as a feeder service to the latter. Bus Rapid Transit can be used to upgrade new parts of the network into trunklines. At somewhat lower speeds and distances, streetcars and buses can also form a multi-hub network, with dedicated lanes or transitways in downtown.

Prominent stations can be major attractors for ridership and transit-oriented development activity. Keeping transfer points compact and walking-oriented is key to their development potential.

With targeted investments, surface bus networks may provide substantially faster travel for specific routes, even in systems with separate off-street transit. Bus networks are often simpler and less expensive to plan and build.

Service frequency, and subsequent investments, can be imbalanced toward rail, especially when the rail network is well established.

Because transfers are key to an effective network, the transfer process should be as simple and seamless as possible. Design transit hubs to be simple to navigate, and implement transfer-supportive fare payment methods.

Design rapid network to run primarily on either large streets with dedicated transit lanes or on other streets where reliable service can be provided.

More trips can be made more quickly on a network of high-frequency routes with predictable, rapid-style service and comfortable stops, making transfers an acceptable part of commutes.

Cities with distributed destinations including polycentric or corridor-based employment centers.

Improves service for a very high percentage of existing passengers.

High potential to attract new passengers, especially those whose destinations are outside of downtown.

Some passengers may have longer trips to downtown or longer walks to rapid stops.

Straightened routes operating as part of a grid provides the ability to run higher frequency at a lower cost by reducing the total number of routes.

Design system as a grid so that most destinations can be reached from most origins with only one transfer, running through-services rather than terminating at key destinations.

Design rapid network to run primarily on either large streets with dedicated transit lanes or on other streets where reliable service can be provided.

Riders are willing to walk slightly farther to access higher-quality service, so stops and routes can be spaced farther apart; however, service must be frequent and reliable to ensure quality is not degraded.

Because transfers are key to an effective network, the transfer process should be as simple and seamless as possible. More destinations can be connected if riders can transfer conveniently along the grid with minimal added trip time. 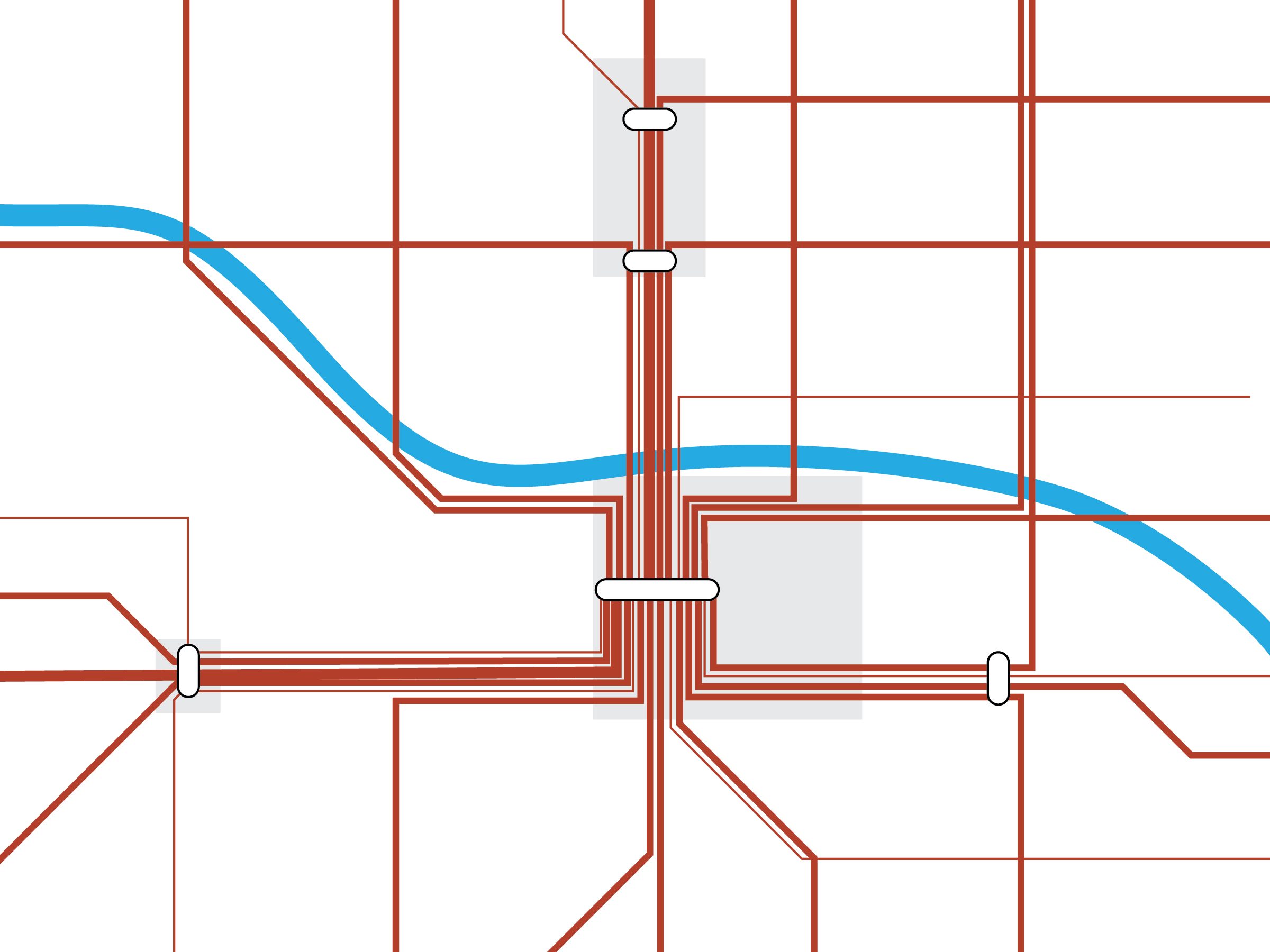 Many transit networks are oriented around a traditional set of destinations and have evolved only gradually over the past decades—often changing little since the introduction of the bus itself.

One-seat networks connecting to downtowns have long been a goal for transit systems competing with private automobiles. But in most cities, destinations are distributed, not just concentrated in downtown.

In cities with a strong downtown core.

In cities where topography or irregular street patterns result in strong activity corridors feeding into a central hub.

Provides a one-seat ride for passengers traveling to the network hub.

Where population density or funding do not allow high-frequency routes, radial networks can still provide basic service across a city. Especially where travel times are reliable, as in smaller cities, a radial or hub network can be set up with “pulse” schedules where all routes arrive at a central hub at the same time.

Often requires that passengers travel downtown to transfer to another line. Destinations that are neither along the closest bus line nor downtown may be difficult to reach. However, select cross-town routes can provide important connections between branches.

Trunk segments near downtown with multiple transit routes may be well served with frequent service, but diverging routes may be difficult to understand.

Routes sharing a common trunk segment may have a common identifier, acting as a unified line that is easier to understand for passenger trip-planning closer to downtown.