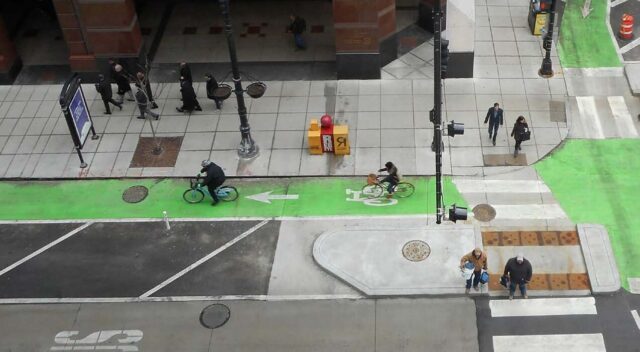 Protected intersections have been implemented across North America as cities have expanded their protected bikeway networks. Also known as setback or offset intersections, this design keeps bicycles physically separate from motor vehicles up until the intersection, providing a high degree of comfort and safety for people of all ages and abilities. This design can reduce the likelihood of highspeed vehicle turns, improve sightlines, and dramatically reduce the distance and time during which people on bikes are exposed to conflicts. For example, in San Francisco, a protected intersection design resulted in 98% of drivers yielding to people on bikes, and 100% yielding to people walking. A study in New York found that protected intersections had fewer vehicle-bike conflicts than even a dedicated turn lane with a dedicated bike signal phase.

The setback between the motor vehicle lane and the bikeway makes people on bikes more easily visible to turning drivers than in a conventional intersection.

Corner islands anchor the design, extending the protected bike lane’s separation as far into the intersection as possible and tightening the corner’s turn radius. They create a bike queue area after the crosswalk, the natural place for people on bikes to wait.

The setback creates a waiting zone for turning cars, where drivers can yield to bikes after starting to turn but before crossing the path of oncoming bicycles. If it is large enough, this area lets drivers wait while through-traffic passes them, relieving pressure to turn too quickly.

Protected intersections also provide shorter, safer crossings for people walking. With low-speed vehicle turns and room for accessible pedestrian islands, people on foot and using personal mobility devices get many of the benefits of curb extensions.

Protected intersections create shorter, simpler crossings, more predictable movements, and better visibility between people on bikes and people driving. As a result, the intersection is more comfortable and safer for people using the bikeway and the crosswalk. 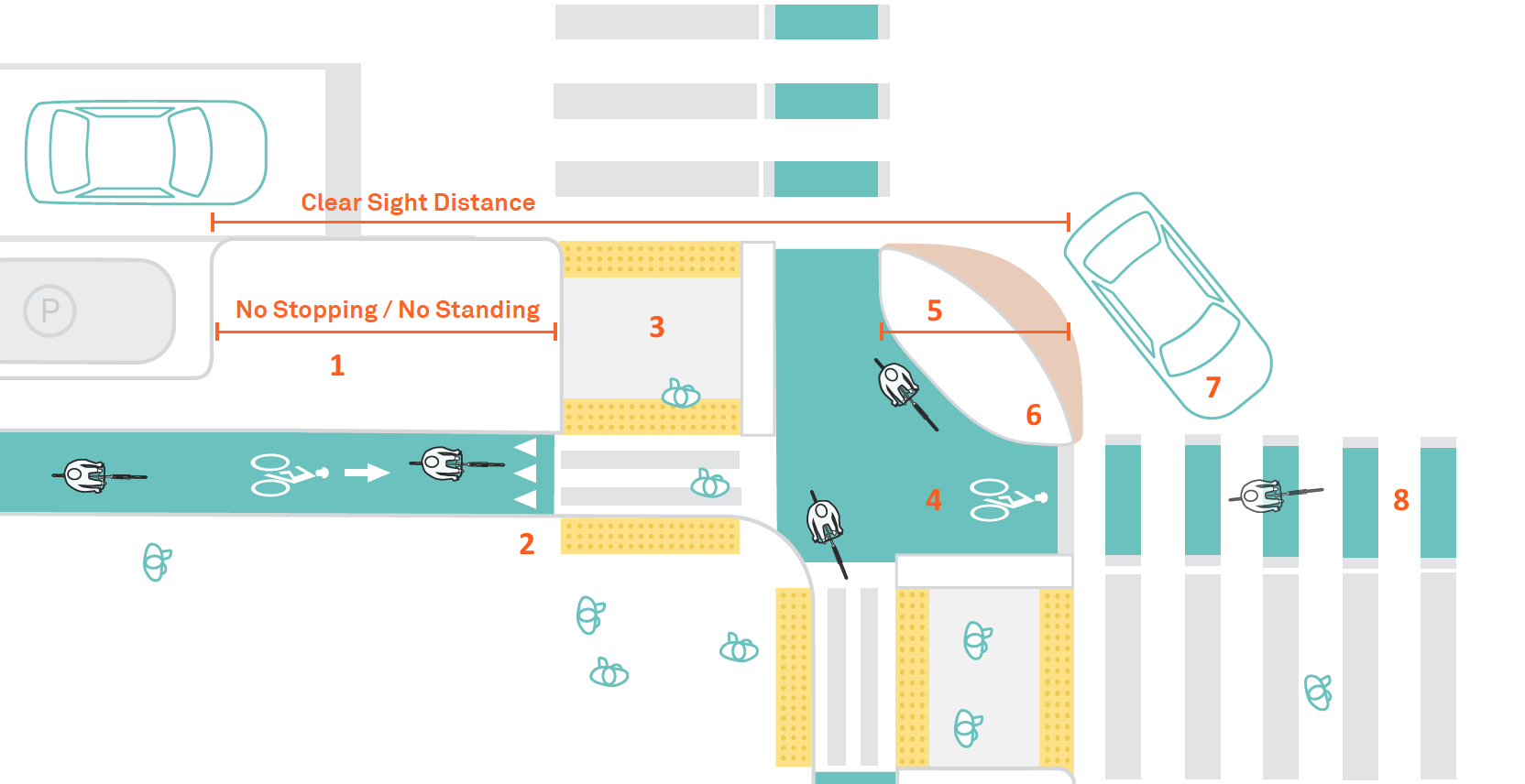 1. No Stopping / No Standing Zone
Motor vehicle parking and stopping are prohibited on the approach to the intersection.

3. Pedestrian Islands
Islands reduce crossing distances and improve visibility by keeping the intersection clear. Wider islands support high volumes of people walking and biking, raising the capacity of the intersection. In some cases, islands can reduce the signal time needed for pedestrians.

4. Bike Queue Area
People biking can wait ahead of the crosswalk for a green signal or a gap in traffic. This shortens crossing distances, and accommodates the natural positioning of people biking. Bike detection optional.

5. Bikeway Setback
The setback determines how much room will be available for drivers to wait and yield, and the angle at which they cross the bikeway. Larger setbacks provide better visibility and give people bicycling more time to notice and react to turning vehicles.

6. Corner Island
A corner island separates bikes from motor vehicles, prevents motor vehicles from encroaching on the bikeway, and creates a protected queuing area for people on bikes waiting to turn.

7. Motorist Waiting Zone
The space between the motor vehicle lane and the crossbike provides a place for motor vehicle drivers to wait before turning across the bike’s path of travel.

8. Crossbikes / Intersection Crossing Markings
Markings provide conspicuity and directional guidance to bikes in the intersection. They are marked with dotted bicycle lane line extensions and may be supplemented with green color or bike symbols between these lines.

Bikeway Setback: The bikeway setback distance determines most other dimensions of the protected intersection. A 10’ setback, created in the shadow of the parking/loading lane, is shown. Where practical, a setback of 14-20’ is preferred. If setbacks smaller than 12’ are used, they should be accompanied by longer clear distances, and additional signal phasing or speed reduction strategies should be considered. Setbacks larger than 20’ may increase turn speeds, and setbacks larger than 25’ should be treated as a separate intersection.

Corner Island: Radii should be small enough that passenger cars are discouraged from turning faster than 10 mph. This is accomplished with an effective turn radius of less than 18’, usually resulting from a 10’ to 15’ curb radius. Corner islands may have a mountable override area to accommodate large vehicles. Corner islands may also be implemented as channelization markings that are reinforced by mountable vertical elements such as modular speed bumps.

Pedestrian Islands: Wider islands support high volumes of people walking and biking, raising the person-capacity of the intersection. To serve as an accessible waiting area, the minimum width of a pedestrian island is 6’.13 The desired minimum width is 8’. If 6’ or wider, detectable warning surfaces must be placed at both sides of the island to distinguish the bikeway from the sidewalk, and the island from the bikeway.

No Stopping/No Standing Zones: Zones should be long enough to allow approaching drivers and bike riders to see and recognize one another ahead of the intersection. Many cities already designate 20’-30’ of curb before an intersection as a no-standing zone to increase visibility. Features that permit visibility, such as plants, seating, bike parking, and shared micromobility stations, can be placed here.

Bike Queue Areas: Queue areas should be large enough for anticipated bicycle volumes, which often increase substantially after implementation of protected bike lanes. The bike queue area should be at least 6.5’ deep, but dimensions of 10’ or greater are desirable to accommodate trailers, cargo bicycles, and high bike volumes.

Bike Yield Line & Bike Lane Crosswalk: Bike traffic should be expected to move forward to the stop bar on any signal phase, and pedestrian traffic should also be expected to cross to the island on any phase. This operation may be formalized with optional yield teeth on the bikeway before the crosswalk. The 2009 US MUTCD calls for a “Yield Here to Pedestrian” sign if yield teeth are used. In some jurisdictions, a yield line is not necessary before a crosswalk.

Signs: A modified “Turning Vehicles Yield to Bikes and Pedestrians” sign (R10-15)17 is recommended where a signalized intersection allows right turns concurrent with bicycle and pedestrian movements. It is required in jurisdictions where state/provincial or local laws are such that pedestrians and bikes do not automatically have the right of way over turning vehicles. The sign should be mounted close to any signal head that regulates vehicles turning across the bikeway and any required location. (This modified sign remains experimental under the 2009 MUTCD.)

Where no parking lane exists, a setback can be created by shifting the bikeway or motor vehicle lanes away from one another as they approach the intersection. 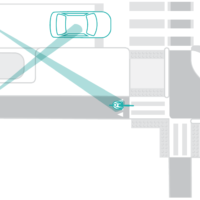 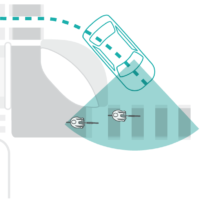 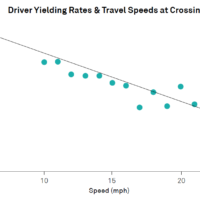 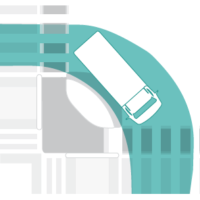 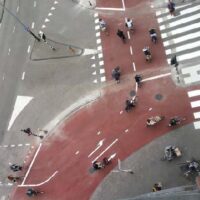