People on bikes can be given a dedicated path through the intersection even where there is not enough space for a full bike setback. By providing excellent visibility and low turn speeds, dedicated bikeway intersections provide key improvements over conventional bike lane intersections.

To reduce conflicts between bikes and turning vehicles on busy streets, turn speed reduction techniques and new signal phasing patterns can complement the design of the dedicated bike intersection. These techniques include corner wedges, which feature a modular speed bump or similar element over which vehicles are permitted to turn at low speeds. Where the bikeway is on a two-way street or intersects with one, the speed of left turns across the bikeway can be reduced with centerline hardening or pedestrian safety islands.

Dedicated bike intersections may be more challenging to use than a protected intersection. With a relatively narrow buffer or no buffer, the angle at which turning drivers see pedestrians is lower than at protected intersections, so people on bikes cannot always confirm that a turning driver has recognized them and will remain stopped. In addition, people on bikes do not generally have a queue space within the intersection, and instead wait before the crosswalk, or use a conventional turn queue box to turn across traffic. 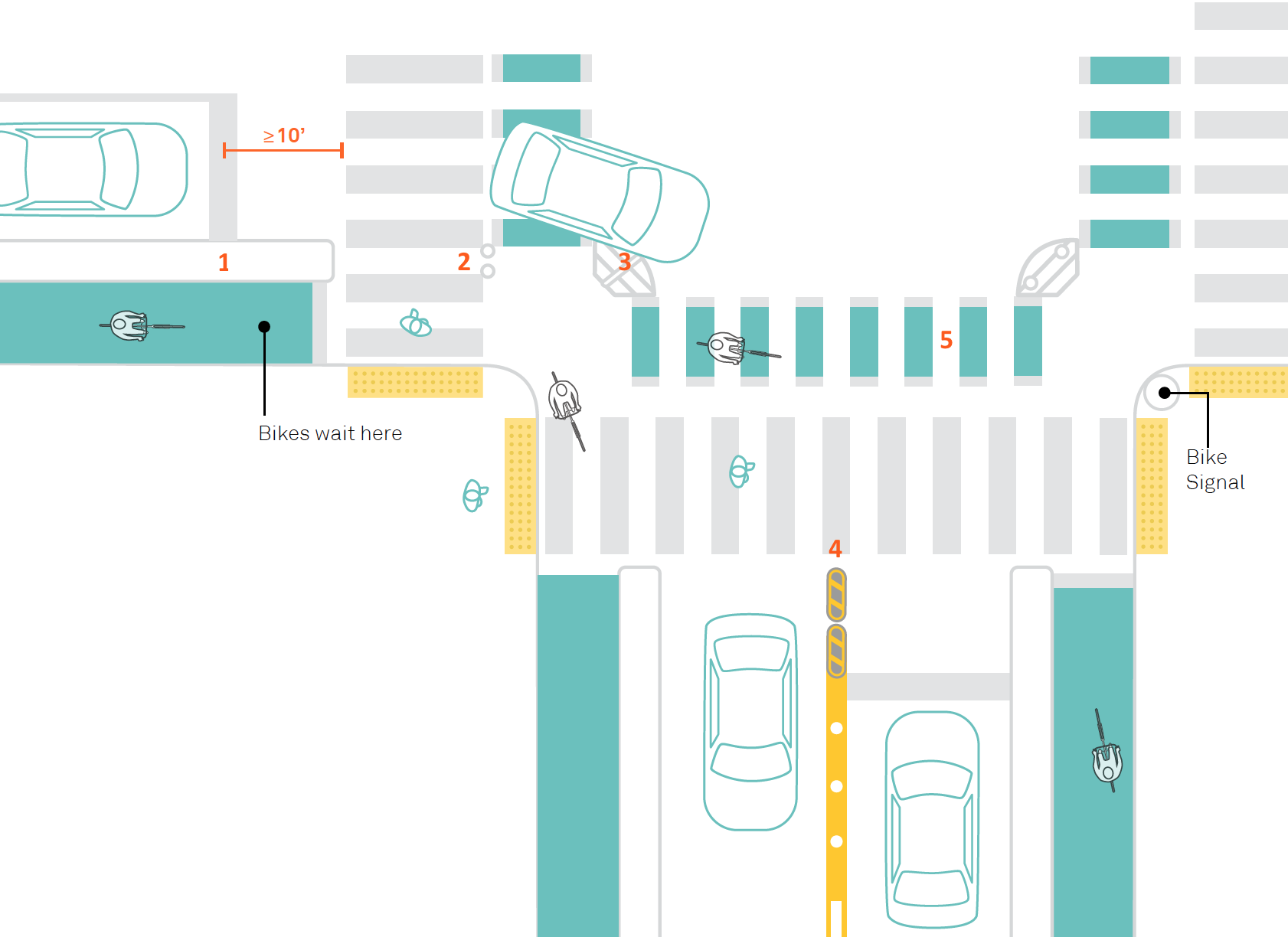 1. Buffer or Curb
A marked, painted, or raised buffer provides people on bikes with a defined travel zone at the approach to the intersection.

2. Crosswalk Separator
A raised element such as mountable curb or a pair of flexible delineator posts discourages turning vehicles from cutting across the bikeway when turning right.

3. Corner Wedge & Speed Bump
Speed reduction devices, such as modular speed bumps, help prevent high-speed turns and are expected to improve driver yielding. They can extend over the space used by turning vehicles but not over the bikeway or crosswalk.

4. Centerline Hardening
Modular curbs with or without vertical delineators reduce the speed of turns across the bikeway and shorten the conflict zone.

Vertical Elements: Vertical elements in the buffer are recommended. The same vertical separation used on the rest of the bikeway can generally be continued until the intersection.

Traversable Separation: In some cases, it is desirable to provide flush or traversable buffers to allow riders to exit the bike lane ahead of the intersection. If high bicycle volume or speeds are anticipated, or if turning drivers are expected to block the bikeway temporarily, it is desirable to provide people on bikes with points where they can exit the lane ahead of the intersection.

The combination of flexibility and separation from motor vehicles can be provided with a marked buffer with flexible delineator posts or other discontinuous, low-impact elements. To reduce interference with street sweeping or snow clearing operations, short raised elements, such as modular speed bumps, should be placed in line with curbs or higher raised elements, such as vertical delineators.

Curbs: Curbs or other hard elements that end at the crosswalk can prevent turning cars from encroaching on the bikeway before the intersection. If built curbs, medians or other continuous vertical elements are used in the buffer, the recommended minimum bikeway width is 6’.

Raised Bike Lanes: Often separated by a mountable curb but no other buffer, raised lanes can also use dedicated intersection geometry. The bike lane can slope down to the grade of the cross-street, or can remain slightly raised to encourage turning vehicles from the main street to yield.

If the buffer is 4’ wide or wider, either color pavement or channelization chevrons should be used. If the bikeway buffer is 6’ or wider at the intersection, see Protected Intersections.

Signals: Using a combination of a leading bike signal phase or interval, and setting back the stop bar for motor vehicles, people on bikes get a head start before cars start turning. A Leading Bike + Pedestrian Interval (LBI) can be provided if a shared through/turn lane is next to the bikeway. If a dedicated right or left turn lane is next to the bikeway, protected-permissive bike signal phasing should be considered.25 Protected signal phases should be considered if turn volumes from the adjacent lane exceed 120 to 150 vph. Protected signal phases should also be considered if conflicting left turn volumes (on two-way streets) across the bikeway exceed 60 to 90 vph, or if these turns cross multiple traffic lanes.

Signs: A modified “Turning Vehicles Yield to Bikes and Pedestrians” sign (R10-15) is recommended at dedicated intersections.27 It is required in jurisdictions where pedestrians and bikes do not automatically have the right of way over turning vehicles. The sign should be mounted in accordance with existing location standards. (This modified sign is experimental under the 2009 MUTCD.)

Dedicated intersection geometry should be considered where there is not enough space to set back the bikeway from mixed traffic at the intersection. This condition often arises when a protected bike lane runs close to mixed traffic lanes without a parking or loading lane between them. Even where a bikeway generally has a large buffer, some intersections have high enough motor vehicle turn volumes that a dedicated turn lane is preferred over a protected intersection design. The combination of high turn volumes and low turn speeds are common in high-activity, walkable downtown streets and neighborhood main streets.

Dedicated intersections can be implemented at signalized, stop-controlled, and unsignalized locations, with small geometric variations. Specific design elements, such as turn wedges and centerline hardening, are also applicable to protected intersection designs. 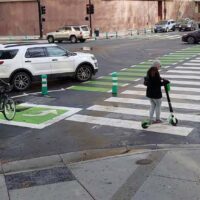 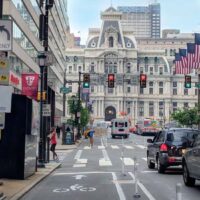