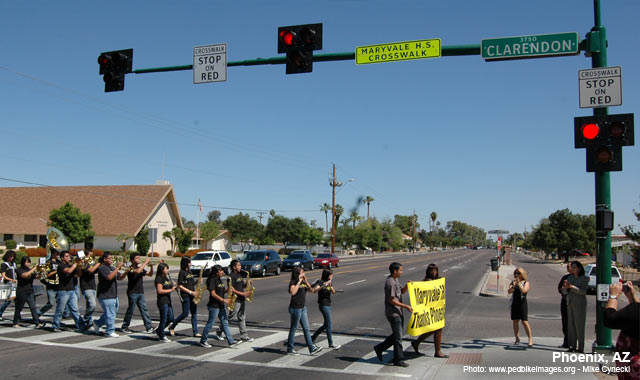 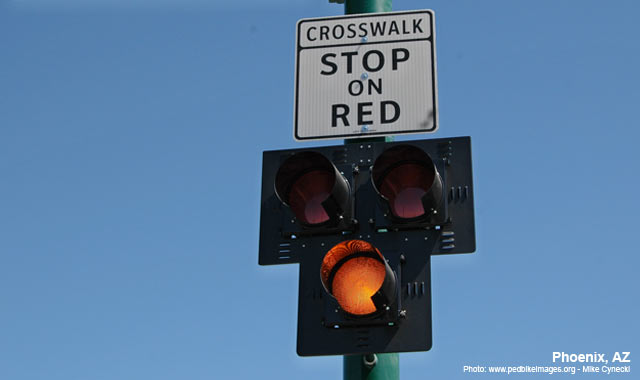 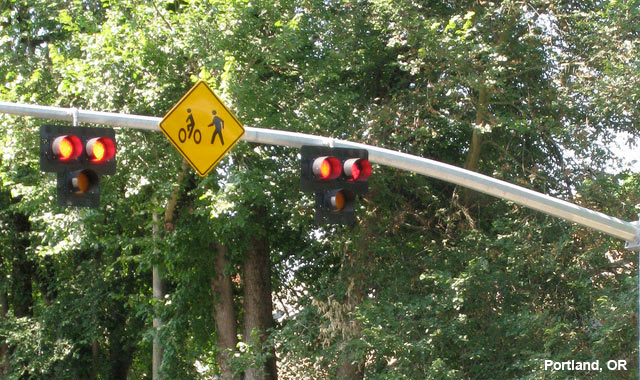 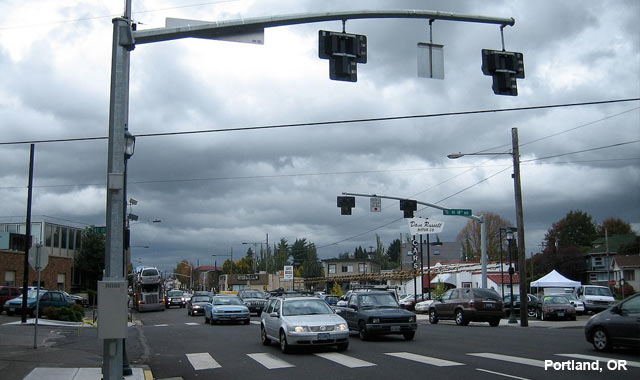 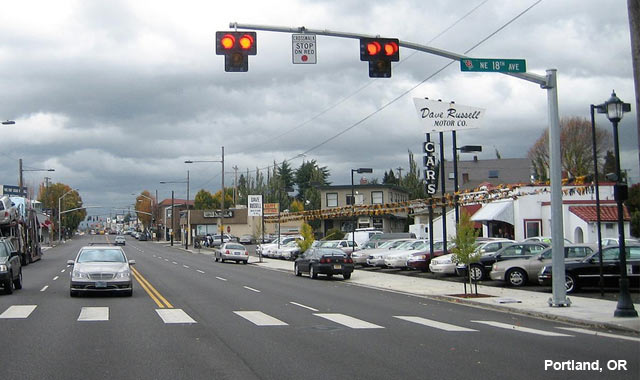 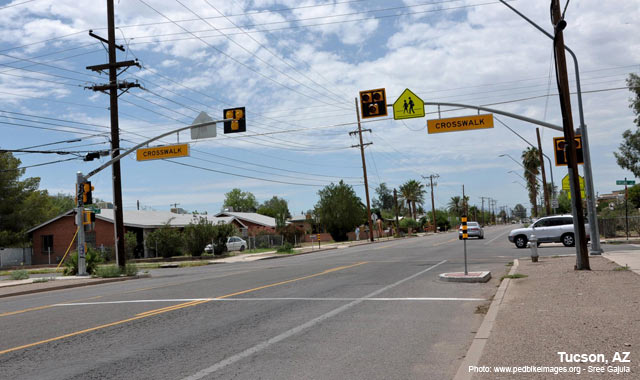 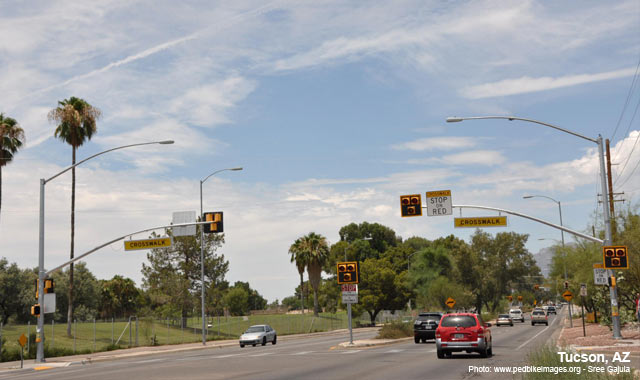 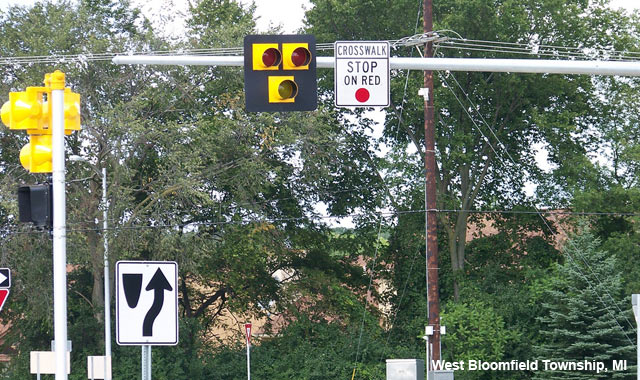 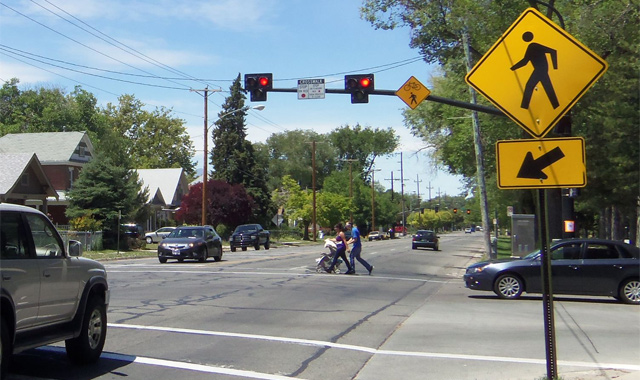 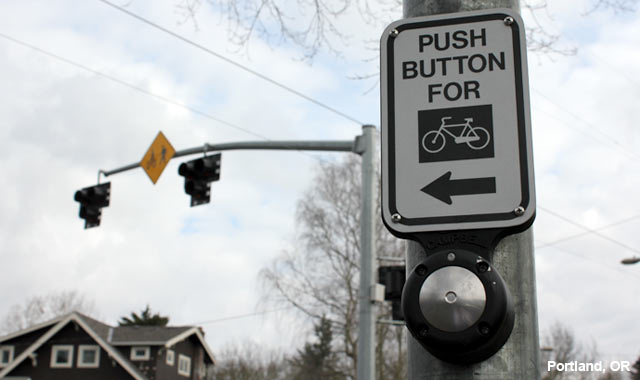 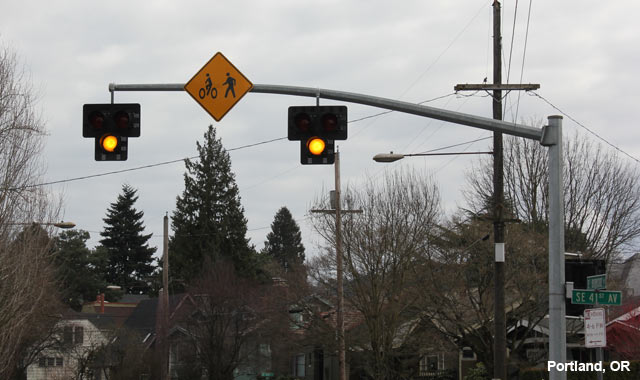 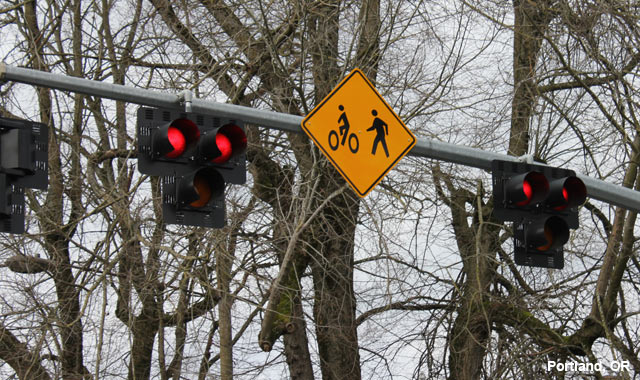 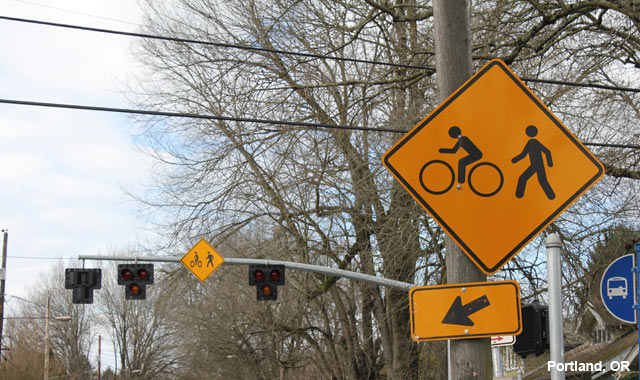 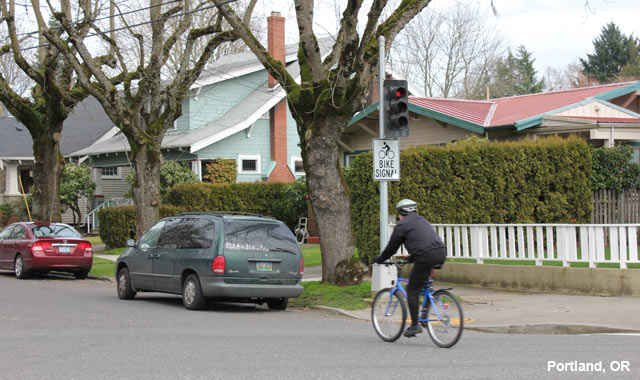 A hybrid beacon, also known as a High-intensity Activated CrosswalK (HAWK), consists of a signal-head with two red lenses over a single yellow lens on the major street, and pedestrian and/or bicycle signal heads for the minor street. There are no signal indications for motor vehicles on the minor street approaches. Hybrid beacons were developed specifically to enhance pedestrian crossings of major streets. However, several cities have installed modified hybrid beacons that explicitly incorporate bicycle movements. The information provided here focuses on the application of hybrid beacons for bicyclists.

Hybrid beacons are used to improve non-motorized crossings of major streets in locations where side-street volumes do not support installation of a conventional traffic signal (or where there are concerns that a conventional signal will encourage additional motor vehicle traffic on the minor street). Hybrid beacons may also be used at mid-block crossing locations (e.g., trail crossings).

The hybrid beacon can significantly improve the operations of a bicycle route, particularly along bicycle boulevards. Because of the low traffic volumes on these facilities, intersections with major roadways are often unsignalized, creating difficult and potentially unsafe crossing conditions for bicyclists. Hybrid beacons may be supplemented with a bike signal and signal detection for the minor street approaches to facilitate bicycle crossings.

Hybrid beacon operations are significantly different from the operations of standard traffic control signals. The figure below illustrates the general sequence of phases for a hybrid beacon as applied for pedestrian crossings. The primary difference compared to a standard signal is that a hybrid beacon displays no indication (i.e., it is dark) when it is not actuated.

Upon actuation (by a pedestrian or bicyclist on the minor street), the beacon begins flashing yellow, changes to steady yellow, then displays a solid red indication with both red lenses. During the solid red phase, drivers must stop and remain stopped, as with a standard traffic signal.

Prior to returning to no indication, the beacon displays an alternating flashing “wig-wag” red that allows drivers to stop and proceed when clear, as they would with a stop sign. To maximize safety when used for bicycle crossings, this phase should be very short and occur after the pedestrian signal head has changed to a solid “DON’T WALK” indication as bicyclists can enter an intersection quickly.

Click on the images below to view 3D concepts of hybrid beacon installations.

Hybrid beacons have been implemented in several US cities, including the following:

Click to see the complete reference material for this treatment.