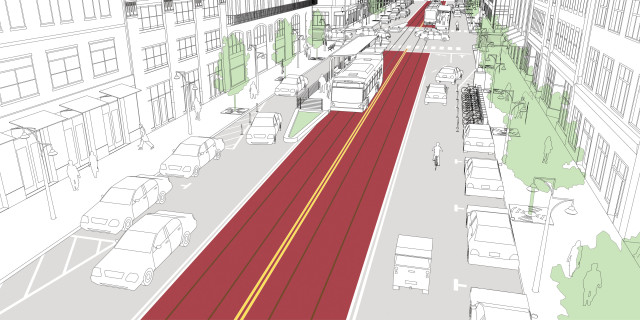 Transit lanes are a portion of the street designated by signs and markings for the preferential or exclusive use of transit vehicles, sometimes permitting limited use by other vehicles. Transit lanes, unlike on-street transitways, are not physically separated from other traffic. This section focuses on the selection, design, and operational or management requirements of specific transit lane varieties, based on vehicle type and street position. 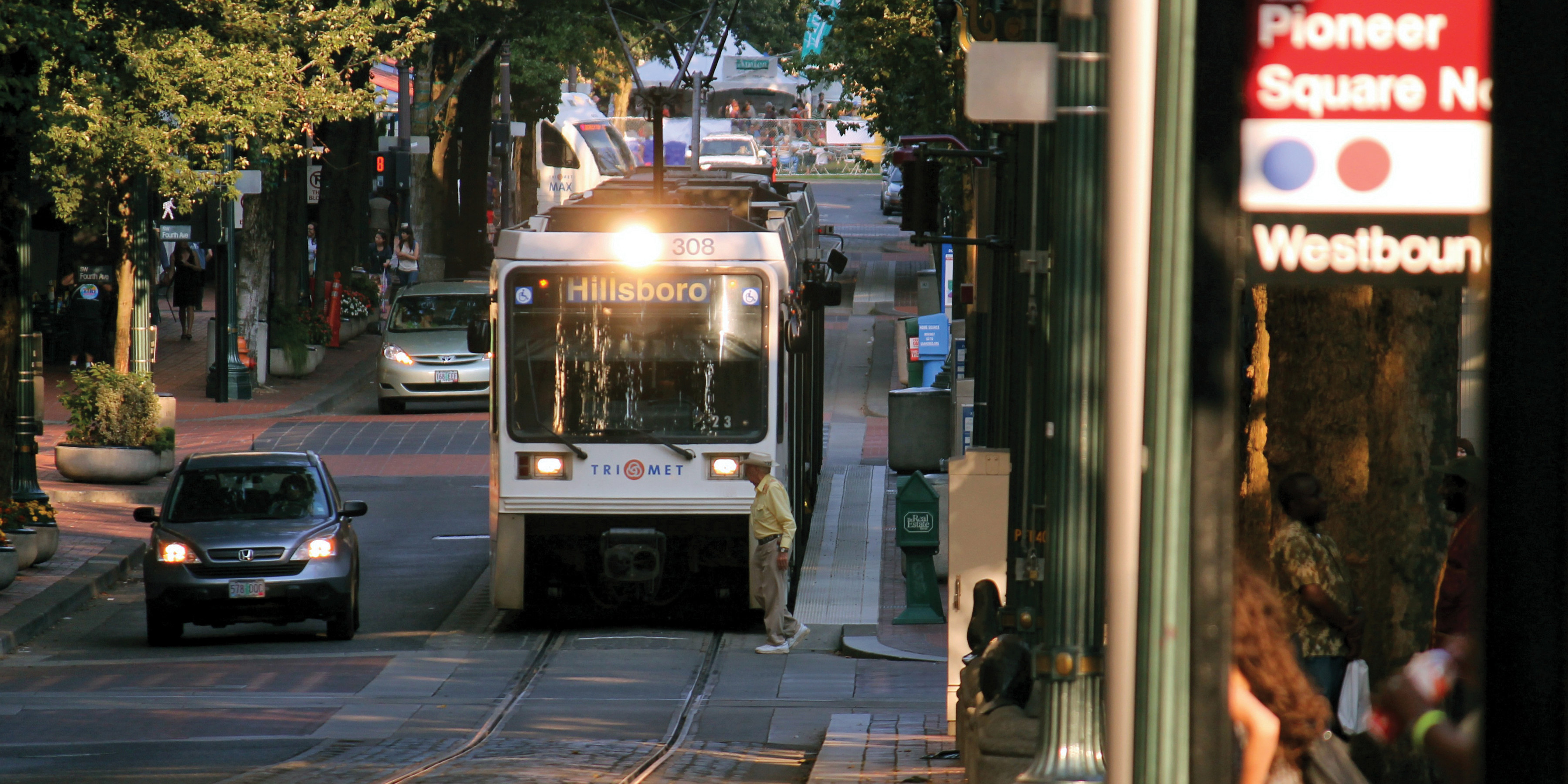 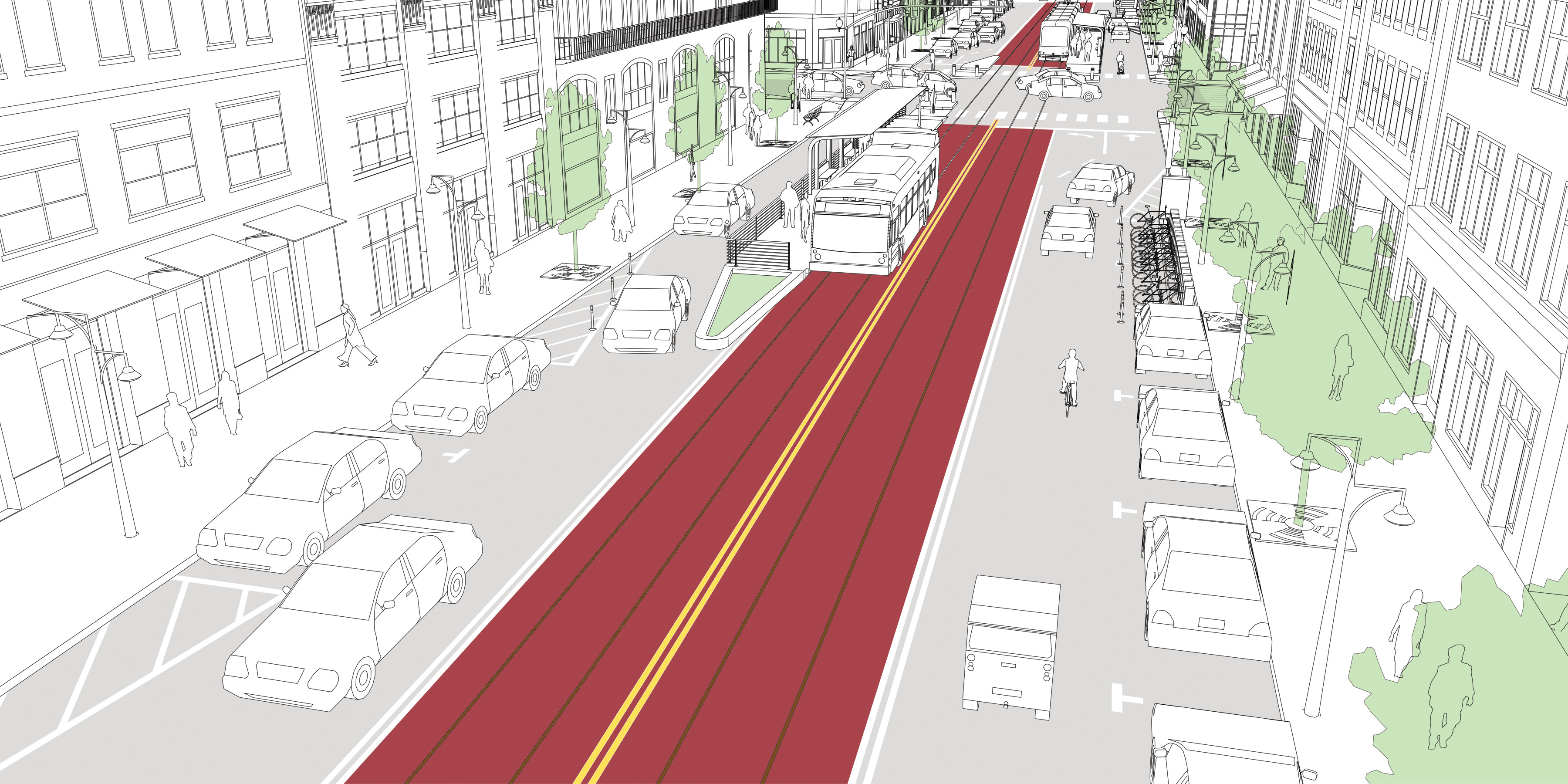 On busy urban streets, transit lanes are the building blocks to provide reliable and robust transit service. Continuous running ways yield the greatest benefit to transit operations, and can often be implemented with little impact, or even positive impact, on general traffic flow.

Transit lanes are implemented by repurposing general traffic lanes or parking lanes and are usually implemented on streets that also accommodate private motor vehicles in at least one direction.

Transit lanes are flexible. They can be dedicated at all times, or only during peak times or daylight hours. Full-time lanes better serve transit performance and visibility, but peak-period lanes may be appropriate in specific contexts.

Transit lanes are broadly applicable on downtown and corridor streets where transit is delayed by congestion and curbside activities.

Smaller streets may be converted to transit-priority or other shared transit streets.

The decision to dedicate a lane to transit on a multilane street should be based on a combination of factors, with special emphasis on transit volume and demand, including future demand, and the potential to reduce total person delay or to limit increases to average travel time over both short and long term analysis periods.

While motor vehicle traffic capacity or travel time is one of many supporting considerations, dedicating lanes to transit should not be ruled out on the basis of any single factor. Vehicle level of service is not an acceptable planning factor when viewed in isolation, and its use should be limited to understanding queue lengths and other changes with potential network impacts.

It is essential to manage turns across transit facilities, sometimes accommodating turns in ways that reduce transit delays, and sometimes prohibiting them or otherwise managing their impacts. As on other multi-lane urban streets, turning movements typically involve conflicts with people walking and biking and with other traffic flows, and require special consideration.

Transit travel time variability and reliability over the day are a good indicator of the potential benefits of transit lanes, especially if boardings are consistent throughout.

Markings, signage, and enforcement maintain the integrity of transit lanes. Automated electronic enforcement, including license-plate readers or video, is preferable to labor-intensive patrols.

Also known as “floating” or “parking-adjacent” lanes, offset transit lanes place transit vehicles in the right-most moving lane, but are offset from the curb by street parking, curb extensions, or raised cycle tracks.

Curbside transit lanes can be implemented with varying levels of separation, increasing service capacity and allowing riders to board directly from the curb. 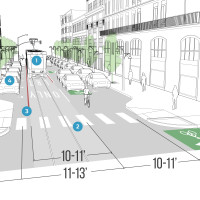 Streetcar and light rail lines can be configured in the right-most travel lane, either curbside or offset by parking. Whether in dedicated or mixed-traffic lanes, rail paths must be kept clear from all but the briefest obstructions. 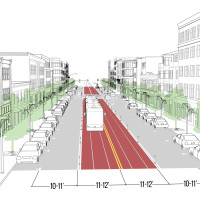 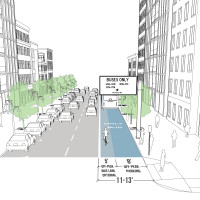 A peak-only bus lane can operate as a dedicated bus lane at peak travel periods and provide general curbside uses at other times. Wider lanes can enable an effective bicycle lane off-peak adjacent to parking. 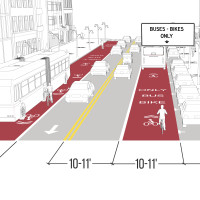 Buses and bicycles often compete for the same space near the curb. Although not a high-comfort bike facility, in appropriate conditions, bus-bike lanes are an option on streets where dedicated bus and bicycle facilities cannot be provided.

Contraflow lanes are typically applied to transit routes to create strategic, efficient connections, but may also be applied to longer corridors in some types of street networks.