The shared bus-bike lane is not a high-comfort bike facility, nor is it appropriate at very high bus volumes. However, buses and bicycles often compete for the same space near the curb. On streets without dedicated bicycle infrastructure, curbside bus lanes frequently attract bicycle traffic, prompting some cities to permit bicycles in bus lanes.

Shared bus-bike lanes can accommodate both modes at low speeds and moderate bus headways, where buses are discouraged from passing, and bicyclists pass buses only at stops. In appropriate conditions, bus-bike lanes are an option on streets where dedicated bus and separate high-comfort bicycle facilities cannot be provided. 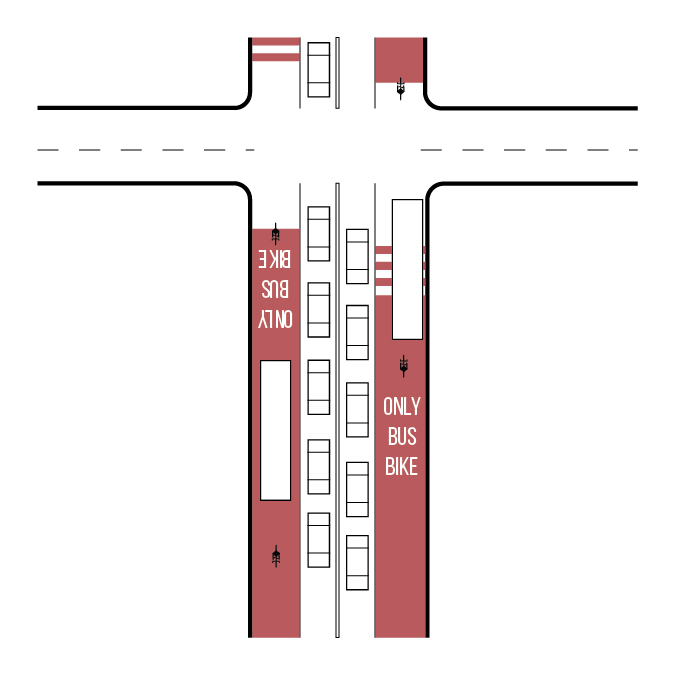 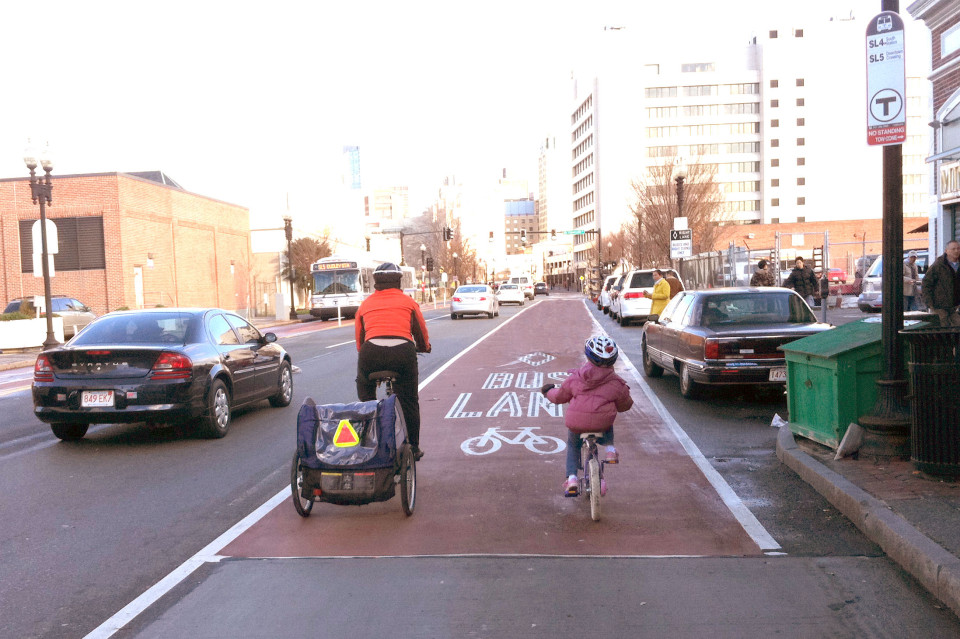 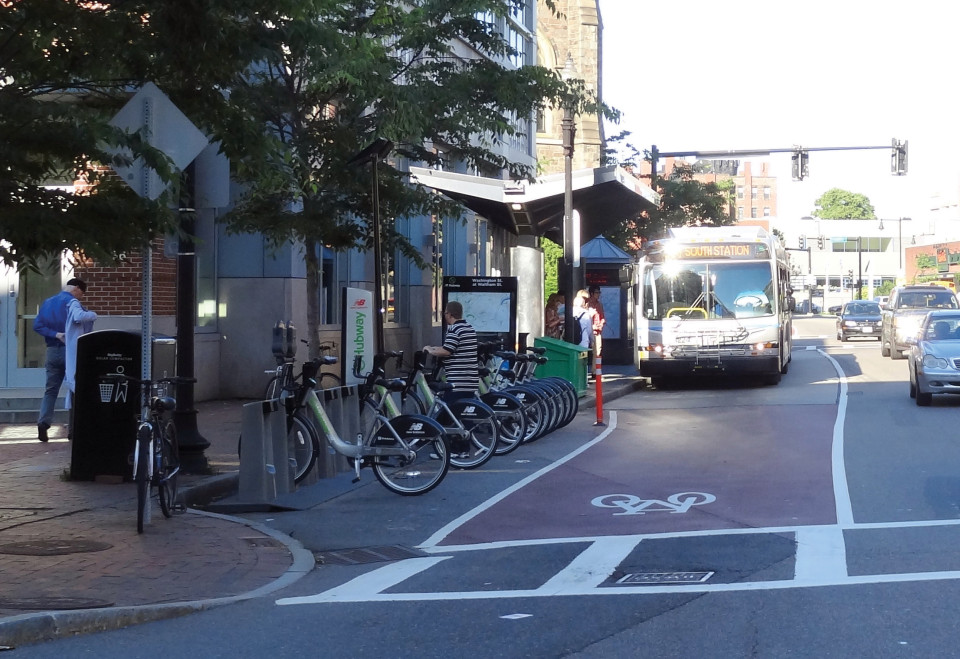 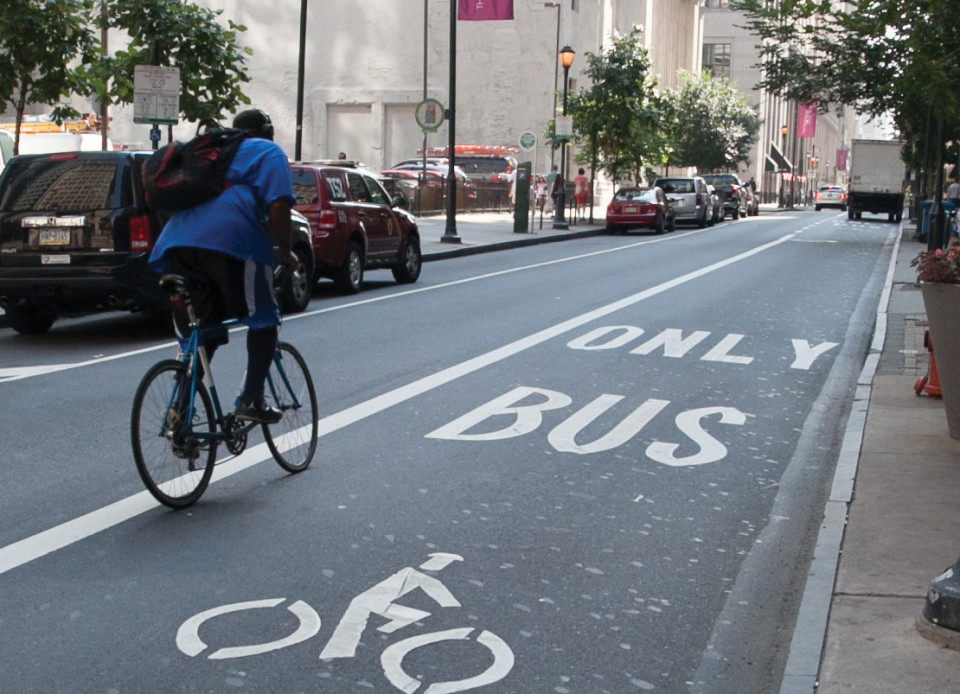 Shared bus-bike lanes are most commonly applied on two-way streets with curbside or offset bus lanes, and no existing or planned bicycle facility.

Contraflow bus lanes with high bicycle demand and no other bicycle facilities in the contraflow direction may be regulated as shared bus-bike lanes.

Shared bus-bike lanes can be applied where parking is in place at off-peak times (see page 120).

Applications should generally be limited to bus lanes with operating speeds of 20 mph or less, and transit headways of 4 minutes or longer.

Lanes may be placed directly adjacent to the curb or offset from the curb by a parking lane.

Special care must be taken not to require bicycle and bus traffic to mix at high speeds. As bus operational speeds and volumes increase, the number of passing events increases, eroding the comfort and, potentially, the safety of the facility for bicyclists.

As on other streets with shared bicycle lanes, bicycle operation must be permitted across the entire road surface. Jurisdictions with “as far right as practicable” rules for bikes must explicitly permit flexible operation on streets with bus-bike lanes.

Pavement markings must indicate that the lane is dedicated to transit, including a solid white line and BIKE BUS ONLY or similar marking.

Buses must operate on the right side of the lane and pull to the curb at stops when possible. Coordination with transit operator instruction is key to the success of a bus-bike lane.

Install signs permitting buses and bicycles, and excluding other traffic. BUSES-BIKES ONLY signs may be used. Overhead signs are preferred.

The width of a full-time bus-bike lane is 10–11 feet for offset lanes, and up to 12 feet for curbside lanes.

Lanes 13–15 feet wide should be avoided in most cases to limit unsafe passing movements. If 15–16 feet of width is available, consider providing a marked conventional bike lane on the left or right side of the bus lane, marked and signed as a green-colored bicycle lane to enhance visibility (see the Urban Bikeway Design Guide). If 13–14 feet of width is available, a marked buffer can be added on the left side of the bus-bike lane so that buses are guided to the right, allowing any passing bicycle traffic to use the buffer area at stops.

Particular attention should be paid to how buses and bicycles interact at bus stops. A bus-bike lane may be wider to allow bikes to pass stopped buses on the left. In these cases, a dashed line should be marked 9 feet from the curb to indicate to bicyclists where to pass. It may be appropriate to narrow adjacent general traffic lanes at bus stops to accommodate a bike passing zone.

The typical width of a part-time bus-bike lane that permits parking during non-peak times, creating an off-peak bike lane, is 12–13 feet. If more space is available, mark a left-side buffer to create an off-peak buffered bike lane.

No vertical separation or significant pavement changes should be installed between bus-bike lanes and mixed-traffic lanes. Any means of separation, such as markings, should be easily traversable by bicycles.

Where space is available, creating a short bike channel wrapping behind transit stops can mitigate conflicts between transit vehicles and bicycles at stops, while also limiting pedestrian-bicyclist conflicts. 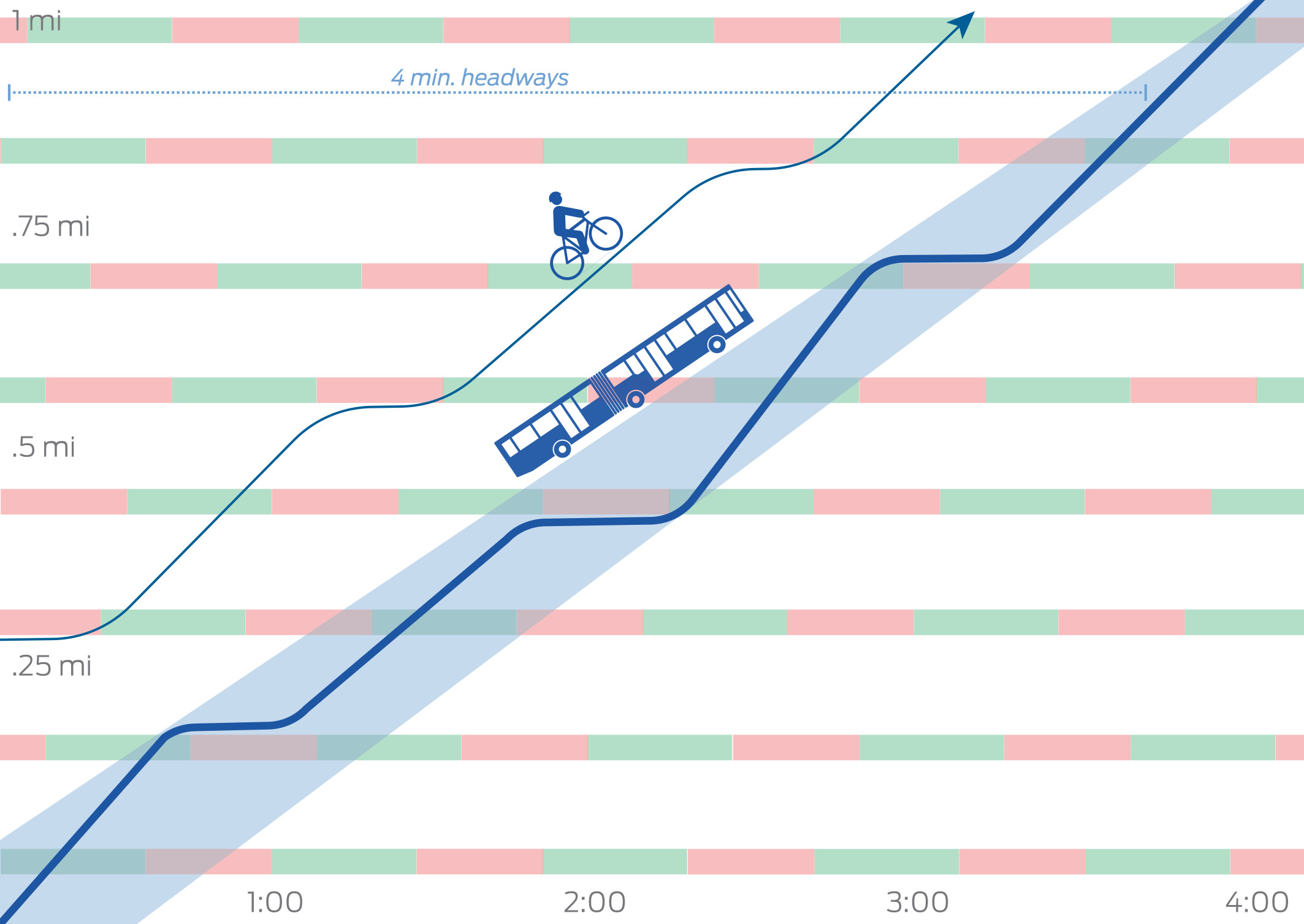 On transit streets where buses and bikes operate in a shared lane at low speeds, conflicts are limited due to their similar average travel speeds. Low-speed signal progressions accommodate bicycle-friendly speeds.