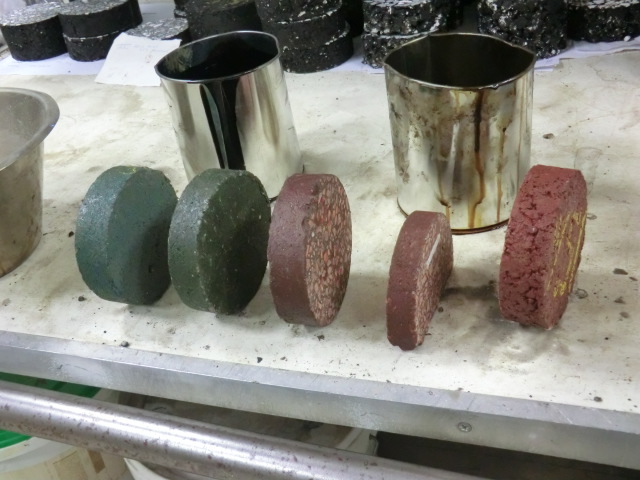 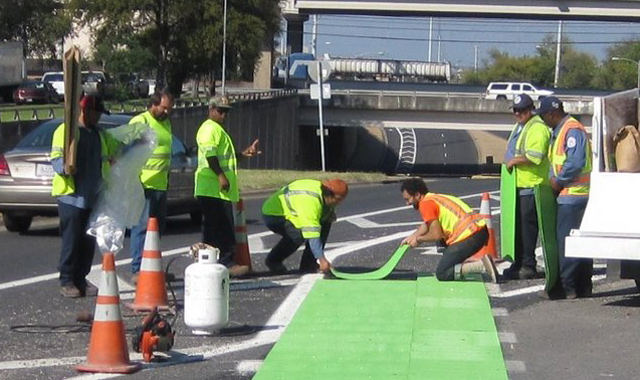 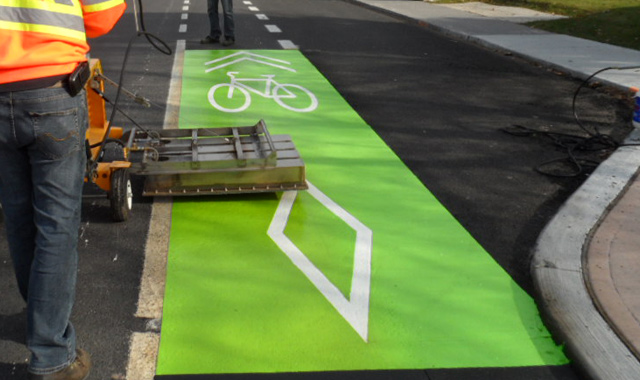 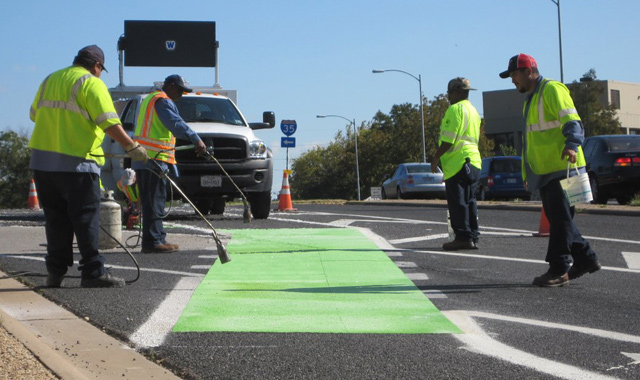 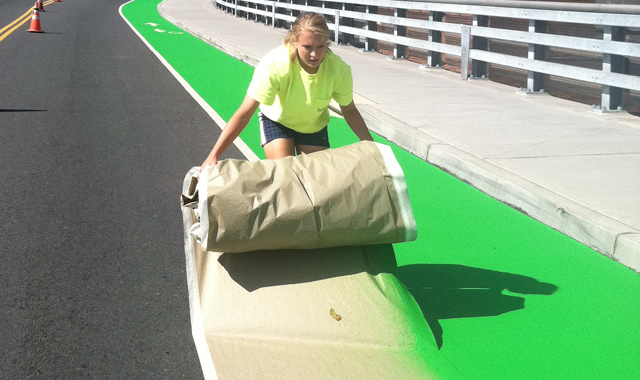 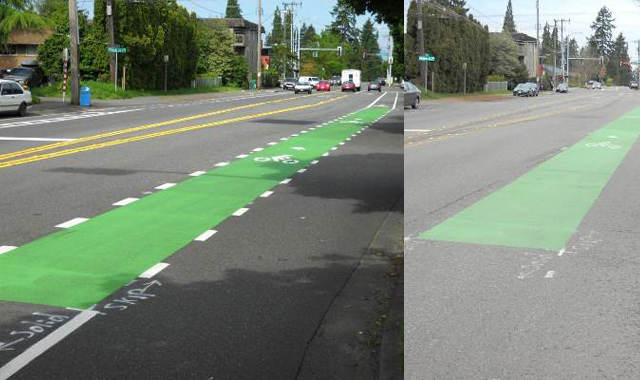 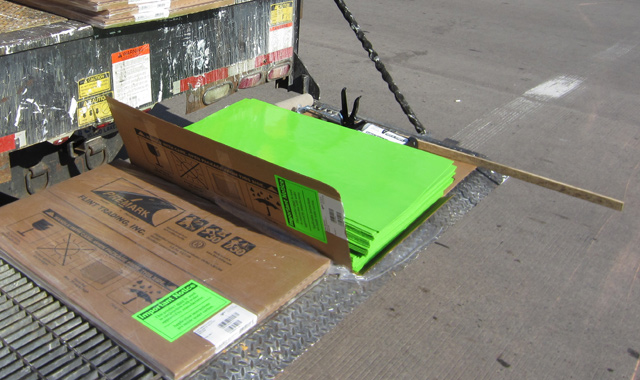 Colored pavement can be utilized either as a corridor treatment along the length of a bike lane or cycle track, or in limited locations as a spot treatment, such as a bike box, conflict area, or intersection crossing marking. Colored pavement for use within bikeways treatments may take the form of an overlay, when the colored material is placed on top of the pavement or embedded, when the colored material is mixed into the pavement.

Paint, sometimes with additives such as reflective glass beads for retro reflectivity and sand for skid resistance, is the most widely used method to mark road surfaces. Paint is considered a non-durable pavement marking, is easily worn by vehicle tires and the elements in snowy winter climates, and often requires annual reapplication. Paint is the least expensive of the overlay materials.

Durable Liquid Pavement Markings (DLPM) include epoxy and Methyl Methacrylate (MMA). Epoxies are adhesive, waterborne acrylics that are typically applied as a paint or spray. MMA are 2-part liquids comprised of a resin and activator. While both coatings can be skid resistant, retro reflective and can adhere to concrete or asphalt surfaces, epoxies are sensitive to moisture and temperature and may require long dry times. MMA may be installed at any temperature, is durable and dries quickly, but is more expensive than epoxy.

Thermoplastic, another type of durable pavement marking, is a type of plastic made from polymer resins that becomes a homogenized liquid when heated and hard when cooled. Thermoplastic can be pre-formed in specific shapes, such as tiles that can be assembled like a puzzle to color bicycle facilities. Thermoplastic can also be used for bicycle lane symbols, arrows, pavement legends and shared lane markings.

Thermoplastic tends to last longer than epoxy and is easier to apply then MMA. Retro reflective and anti-skid materials can be applied or mixed throughout the plastic.

Colored asphalt is composed of the same material as standard asphalt, but has a colored pigment added. The colored asphalt may be installed as a thin layer over conventional asphalt to reduce cost. One well-known use of colored asphalt is Bend, Oregon’s red bike lanes, which utilize a localized red pigment in the colored asphalt. The tinted asphalt was applied over fresh black asphalt before the year 2000 and has worn well with regular street sweeping and maintenance, but has faded over time. Green pigment options are available.

Previous Experimentation and the History of Color Application in North America

Cities in North America have been experimenting with the application of colored pavement, primarily to highlight bicycle motor vehicle conflict areas since the mid 1990’s, the application of color to an entire corridor is a more recent practice. Between 1997 and 1999, the City of Portland, with support from the Federal Highway Administration (FHWA), conducted an experiment in which 10 conflict areas were marked with blue paint or thermoplastic and accompanying signing. (City of Portland Office of Transportation. (1999). Portland’s Blue Bike Lanes., US Department of Transportation. (2000). Evaluation of Blue Bike Lane Treatment used in Bicycle-Motor Vehicle Conflict Areas in Portland, Oregon.)

Green was selected over blue or red because in the US blue roadway markings are reserved to designate accessibility parking while red markers are sometimes used to alert motorists of wrong way driving. Interim approval for the optional use of green pavement for bike lanes was granted on April 15, 2011.

Many European countries commonly use color in bikeways, but the color chosen and the material used varies widely. European countries with the most extensive bikeway color tradition are the Netherlands and Denmark. In the Netherlands, colored asphalt or colored concrete pavers are used for most applications. Colored asphalt is an economical treatment that provides permanent color, durability, skid resistance and is well-suited to the Dutch practice of coloring bikeways along their entire length. It should be noted that the Dutch choice of red for bikeways lends itself to the use of colored asphalt for two reasons: 1) the coloring agent can be successfully applied to either black bitumen or clear bitumen (as opposed to other colors, which can only be implemented with the more expensive clear bitumen), and 2) naturally red-colored rock can be used for the aggregate agent. In Denmark, France, Luxembourg and Germany, bikeway coloring strategies vary, but are generally applied as spot treatments (as opposed to coloring the entire facility). Thermoplastic and epoxy (also known as cold plastic in Europe) are the preferred medium for applying intersection spot treatment bikeway color in many European countries.

21 North American peer cities where colored pavement is in use, or where installations are planned for the near future, were interviewed to determine the state of the practice. Interviewees represented a range of regions, climates, sizes, and levels of experiences with colored pavement. The interviews resulted in several common themes, including:

What material is most commonly used? Read More+


Thermoplastic is the most commonly-used material in US cities and is typically used for spot treatments, such as in bike boxes, conflict areas, or intersection crossing markings. Cities selected thermoplastic based on conversations with other peer cities, proven durability in conflict areas, relatively minimal traffic impacts during installation, availability of material, ease of installation, and ability to spot repair. The key point of criticism against thermoplastic was the increased difficulty of installation on concrete or older asphalt (requiring a primer) and the relatively high material cost. Materials that were less frequently used include MMA, epoxy, and water-based paint. Peer cities reported mixed results on the use of paint, due in part to climate and motor vehicle related wear. Both San Francisco, CA and Missoula, Mt MT reported use of paint on cycle tracks, both at conflict points and throughout the length of the corridor. San Francisco reported longevity of about 15 months for the corridor and 12 to 20 months at conflict points, based on ADT. Missoula reported significant paint deterioration at conflict points, but a longer lifetime outside of conflict areas. Minneapolis reported significant wear of less than one winter along shared motor vehicle/bicycle lanes when treated with standard latex paint. (City of Minneapolis Department of Public Works Traffic and Parking Services Division. (2011). Hennepin Avenue Green Shared Lane Study.)

The use of epoxy and MMA-based materials were reported less frequently. Seattle, and Columbia, reported use of MMA-based materials while New York, Philadelphia and Boston, reported using epoxy-based products. Seattle and Columbia reported while the MMA product is more expensive, it has superior longevity at conflict points with high ADT (e.g., freeway entrance ramps) and remains highly visible, which is consistent with the spot vs. corridor application.

What are the challenges of application on asphalt vs. concrete? Read More+


Installation on concrete requires the additional step of applying a primer or sealant and introduces the increased possibility of improper installation and subsequent deterioration. Several peer cities including New York and Salt Lake City reported that applying colored pavement to concrete in poor condition will result in a treatment with a much shorter lifespan . Salt Lake City estimated a lifetime of six months on existing concrete vs. 4-5 years on new asphalt. Regardless of the concrete’s current state of repair, the presence of roadway grease, particulate, dust, dirt and other debris on either an asphalt or concrete roadway resulted in a poor quality installation (reported by Austin and Los Angeles). Several cities, including Chicago, New York and Los Angeles reported grinding or blasting concrete or asphalt roadways to increase the application’s longevity as part of surface preparation. (STV Incorporated, Penn State University and NYC Department of Transportation. (2012). Red Bus Lane Treatment Evaluation.)

What contributed to your decision to use a specific material? Read More+

Factors contributing to a decision to use of specific materials typically include:

What impact does weather make on colored pavement?
Read More+

Weather makes an impact on material selection, especially in cities with cold and snowy climates where salt, sand, and snowplows are frequently used. In cold climates, paint has a shorter than average life span, but correct installation of materials (such as recessed thermoplastic) can increase the material lifespan even in cold climates.
Peer cities like New York, Chicago and Ottawa recommended against the use of water-based paints and indicated that more durable pavement markings like thermoplastic, MMA or epoxy will provide better service over the treatment’s lifetime. (Green Shared Lane Study. STV Incorporated, Penn State University and NYC Department of Transportation. (2012). Red Bus Lane Treatment Evaluation.)

What are the benefits of installation by a contractor vs. city crew? Read More+


Many cities interviewed preferred installation by a city crew to keep costs low. Portland, reported using a contractor when colored pavement was installed as part of a larger capital project, but required maintenance is invariably performed by city crews. In several cities, like Philadelphia, agencies allowed the contractor to spec the material used to apply color, which could result in the use of multiple materials within a single roadway or bikeway network that have different installation and maintenance requirements.
Smaller agencies or agencies that lack experience with thermoplastic or other durable pavement marking installations almost always relied on a contractor for several reasons, including the initial expense of acquiring the necessary equipment for installation, uncertainty about the degree to which bikeways were likely to be colored in the future, or the expense of staff training. This was also the case in cities like Seattle, where the product in use requires personnel to wear specialized safety gear during installation.

What has led to successful installation? Read More+


Successful installation typically derives from staff training and expertise as well as careful design of the treatment. Where pavement quality was good, most cases of failed installation reported by peer cities were based on poor surface preparation and/or desire to proceed with the installation despite adverse climatic conditions, like excessive moisture. Many vendors are willing to provide training and guidance during initial product installation, which can reduce the changes of improper installation.
The color green used also plays a role in user satisfaction. Several cities, including Seattle, San Francisco, New York and Minneapolis, received feedback that early installations were too dark to provide optimal visibility. Planners these cities have reported anecdotally that bicyclists seem happier with the brighter colors that retain better visibility over time.

Do you plan to maintain or expand your colored treatments? Read More+


Most peer cities interviewed reported a commitment to maintaining colored bikeway applications. Cities like Phoenix, that have recently started testing colored pavement or that face budget constraints were less confident about their ability to expand their colored bikeway system. Experimentation with longer corridor treatments in Salt Lake City have led to a desire to change the approach to pavement coloration and mark conflict zones rather than corridors based on material durability and cost. All peer cities interviewed expressed a desire to maintaining their existing system before considering expansion.

Have you thought about long-term maintenance? Read More+


Many cities are considering long-term maintenance of colored pavement as part of the overall system cost, though peer cities with a single demonstration installation were less likely to consider these costs. Cities such as Austin, TX have experienced early deterioration of thermoplastic installation in some locations due to improper installation, poor pavement quality or preexisting oil and debris on the asphalt . (The City of Austin Bicycle Team. (2010). Effects of Colored Lane Markings on Bicyclist and Motorist Behavior at Conflict Areas.) The City plans to consider installing new asphalt prior to new colored thermoplastic installations.
Several cities, like Missoula recommended that the cost for colored pavement be taken into account at all stages of the bikeway network development process, from master planning through implementation and development of public works budgeting (if this process is not already in place).