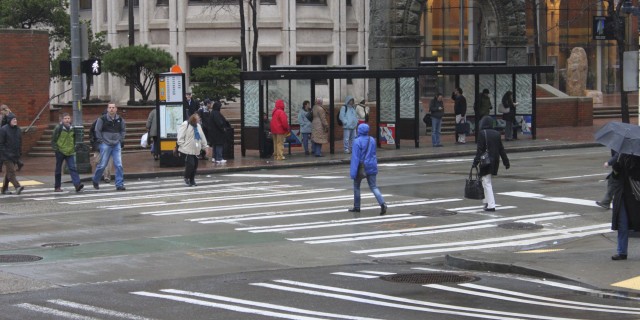 A transit trip is door-to-door, not stop-to-stop. Fully connected and comfortably designed pedestrian networks are an indispensable precursor to great transit systems and to the urban activity levels that transit is designed to support. Since a wide range of potential riders will walk farther on comfortable, active, pedestrian-friendly urban streets than in vehicle-dominated conditions, transit reaches its greatest potential in walkable urban places.

The directness and clarity of the pedestrian network in the transit walkshed has immediate relevance to the safety of transit passengers, and must be prioritized in ridership-oriented transit street design and planning. Good sidewalks save money, since disconnected walking networks can prevent efficient transit routing patterns or add to demand for expensive paratransit trips.

The transit walkshed—the distance people will walk to a transit stop—is not a fixed distance. Though the quarter-to-half-mile transit walkshed is often cited, riders will walk farther in a comfortable walking environment or if doing so reduces trip time, eliminates transfers, or reaches more reliable and rapid service.

Access to transit is improved with direct pedestrian paths of travel that provide the shortest distance to transit stops for the largest number of potential riders. Short block lengths and a high density of intersections will maximize the area reachable on foot in a reasonable length of time.

Safe pedestrian crossings should be provided at all transit stops, including mid-block stops, unless the distance to the next crossing is short, typically 100 feet or less. Where block length is longer than the distance between stops, as on some transit corridors, boulevards, and conventional arterial streets, controlled mid-block crossings must be provided at mid-block stops to provide basic passenger safety. Locally used signal warrants should not be used to prevent the provision of these crossings. Pedestrian crossings on transit streets should be signalized or stop-controlled unless shared street design, raised crossings, or other design elements result in very low speeds, generally 10 mph or lower. 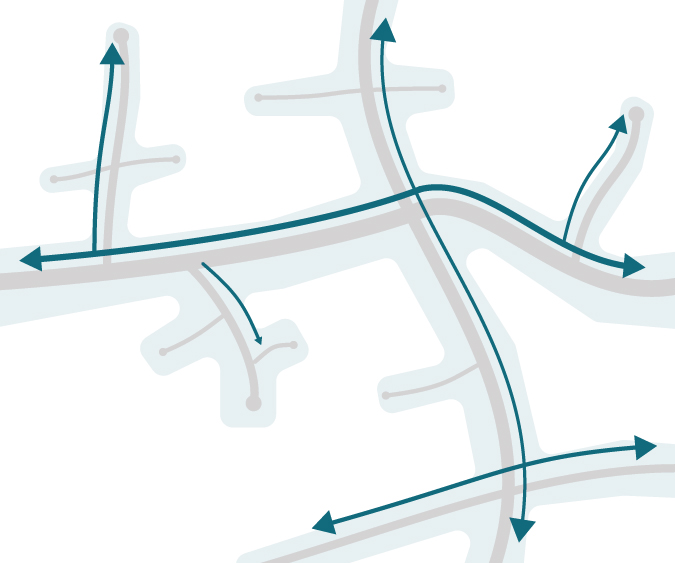 Avoid forced crossings. Incomplete intersections that require pedestrians to cross multiple legs to continue in a straight line are a source of pedestrian delay, and can raise pedestrian crash rates. 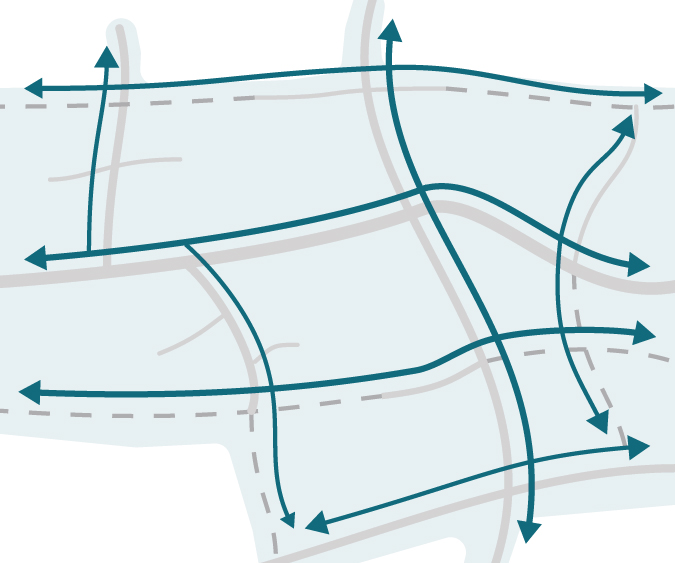 Continuous sidewalks connected by legal and safe pedestrian crossings must be provided on both sides of urban streets with transit service. Where few pedestrians are present, pedestrians and bicyclists may be accommodated on shared-use paths on one or both sides of a street. Gaps in the pedestrian network and other substandard conditions force pedestrians to walk unsafely and severely limit the attractiveness of transit as a mode by indicating that pedestrians should not be present on a street.

Transit-served streets without existing pedestrian facilities should be prioritized for sidewalk construction to provide a connected pedestrian network and avoid forcing transit riders and other pedestrians to walk in motor vehicle traffic. Where sidewalks cannot be constructed on a reasonable schedule, fill gaps in sidewalk coverage by providing interim sidewalks at the grade of the street, using vertical separation elements, edge markings, and pavement color and/or texture. Where interim sidewalks meet a crosswalk, provide detectable warning strips.

Where sidewalks cannot be provided, as in extremely constrained rights-of-way, streets should be regulated as shared spaces. Target speeds of 10 mph or less should be used in most such cases, using all geometric measures necessary to reduce traffic speeds.

The walking zone, or width of sidewalk that is dedicated to walking (uninterrupted by vegetation, utilities, or furniture), must be at minimum 4 feet wide to accommodate a wheelchair, and should be at least 6 feet wide on all urban streets. On most transit streets, a 10–12 feet pedestrian clear path is desirable and can be achieved using 20-feet wide sidewalks from building line to curb. Downtown locations may benefit from wider sidewalks.

Transit shelters and other stop elements must not interfere with pedestrian through paths.

The transit stop is the gateway to the neighborhood, and can include maps and directional signage to key destinations. Cities and transit operators should collaborate with civic groups, BIDs, and local stakeholders to coordinate pedestrian wayfinding and corridor branding. Provide wayfinding beyond the stop location, allowing transit riders to find destinations on other streets and guiding pedestrians to the transit stop.

Sidewalks are a human environment. Transit relies on pedestrian networks that are hospitable in normally occurring conditions, allowing people to walk to their destinations and to assume that walking conditions will be safe and comfortable. Sidewalks that provide people with a place to walk at a distance from large vehicles, with shade in hot weather, opportunities for shelter from rain, and places to sit, can support longer walks to transit and attract a larger number of transit riders.

Human-scale lighting should be provided on sidewalks. Desired light levels should be established and met to ensure that sidewalks are usable and safe at night throughout the walkshed of transit stops and along all streets that can be used for through pedestrian travel.

Building facades with active ground floors enhance both real and perceived street safety, and should be required in redevelopment on most transit streets. Active ground floors include both retail and residential uses that open onto the street.

Use transit stops to expand the range of pedestrian travel, with seating and shelters.