Did you know that one federal document dictates what nearly every street looks like in the US? 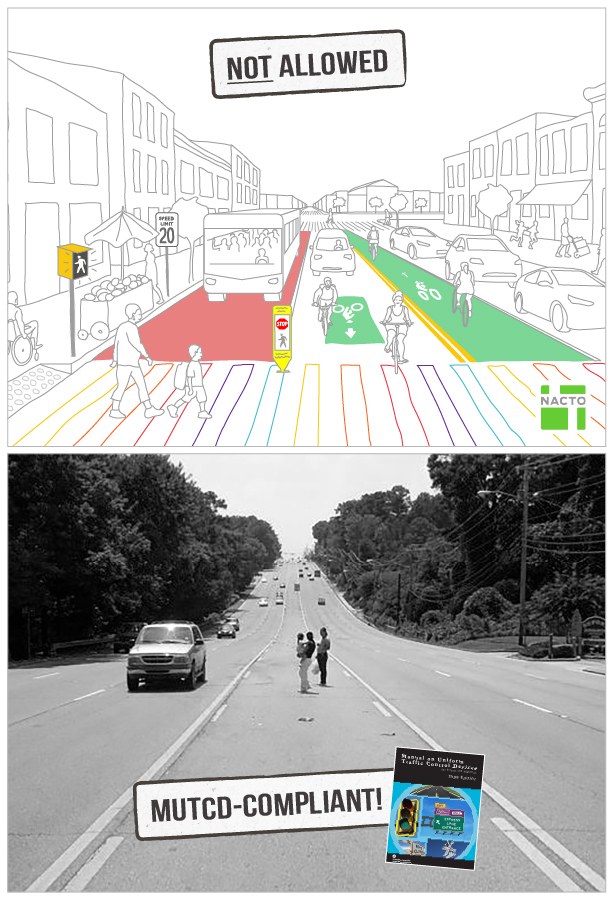 One federal manual dictates how we build our streets. We must reform it.

It’s called the Manual on Uniform Traffic Control Devices (AKA, the MUTCD), and like many obscure regulations, it’s riddled with fundamental problems.

Right now, FHWA is in the process of updating the MUTCD for the first time in more than 10 years. Unfortunately, the currently-proposed update continues to tinker at the margins without fundamentally fixing this flawed regulation, which was last rewritten in 1971.

The United States has a traffic safety crisis more severe than that of any other industrialized country. 35,000+ people die on our roadways every year, double the rate of Canada, and quadruple that of Europe. The costs of this are not borne equally; Black people were struck and killed by drivers at an 82% higher rate than White, non-Hispanic Americans.

Our streets are unsafe because of how they are designed. While all levels of government are responsible, the crisis stems in no small part from the Federal standards used to build our streets. The MUTCD, which governs all road markings, stop signs, and traffic lights in the US, prioritizes moving private vehicles fast above all other goals–like safety, climate, and access for people walking, biking, in a wheelchair, or on a bus.

Under today’s MUTCD, someone crossing a street is less important than the fast-flowing movement of cars. Often, even multiple people dying at an intersection is not enough for the MUTCD to recommend installing a walk signal.

Because of the flawed rules in the MUTCD, American streets are unsafe and unwelcoming, limiting possibilities to create the vibrant, walkable neighborhoods that people want.

Why must FHWA reframe the MUTCD? The manual limits progress and safety–and is full of absurd restrictions

The MUTCD is charged with standardizing signs and markings on US roads to promote safer conditions. Yet, after decades of tweaking the manual, rather than fundamentally fixing it, the MUTCD is now full of seemingly arbitrary and functionally dangerous rules.

As proposed, Federal standards would prohibit colorful crosswalks in the name of safety, but still endorse the 85th percentile for setting speed limits, even if engineers consider it too fast to be safe. The manual is contradictory, stifles the implementation of innovative new designs cities have developed on their streets, and is actively harming people using American streets.

Here are just some of the absurd contradictions in the MUTCD: (available for download here)

How did we get here?

So why is the MUTCD full of so many seemingly arbitrary, functionally dangerous rules? First, the manual restricts the use of any new street design not thoroughly studied by academia, even when there is overwhelming real-world evidence for its application. And second, the manual uses engineering mandates to prioritize the steady flow of private motor vehicle traffic over the safety of people walking, biking, rolling, and taking transit.

What was initially a document to standardize signage on rural roads has evolved, awkwardly, to govern every street in the U.S. Every day, people in our cities and suburbs suffer the consequences, sometimes tragically, because of it. Urban streets serve a variety of functions and many users. The uniformity and rigidity of the MUTCD is valuable on high-speed highways and for critical features like stop signs and uniform traffic lights (green/yellow/red), but in its current form is unworkable in the complex, vibrant contexts of city streets.

The MUTCD was last comprehensively rewritten in 1971. In the 50 years since then, American cities have demonstrated that our streets serve many purposes, and that streets can be great places to walk, bike, take transit, and socialize. A new manual can reflect the realities and aspirations of what our streets can be.

This winter, NACTO organized a campaign across our member cities and transit agencies, along with dozens of partner organizations, to call on FHWA to update the MUTCD into a proactive, multimodal safety regulation.

Since then, NACTO’s staff and 89 member cities and agencies combed through the 1,000 pages of the MUTCD and developed over 400 specific edits, which would substantially reframe the MUTCD to a safe and sustainability-first document. These edits remove the red tape between federal regulation and safe, inviting, and innovative treatments like pedestrian signals, red transit lanes, and crosswalks.

With these changes, cities will no longer have to jump through hoops to use the cost-effective, sustainable street design elements that make streets great places to be.

Read more about the most critical changes FHWA must make to the MUTCD to chart a better path forward.

There were over 25,000 comments submitted to the Federal Register during this once-in-a-decade opportunity to ask FHWA to make key changes to the MUTCD. This enormous volume of comments (a more than ten-fold increase over the last time the MUTCD was updated in 2009) demonstrates the degree to which Americans want change.

We thank every government agency, organization, and individual that made their voice heard, and the dozens of major US cities, transit agencies, and experts who submitted detailed, technical comments that underscore the high level of public concern about the poor safety record of US roads and a strong desire for FHWA to take decisive action to save lives and reduce transportation emissions.

NACTO’s Detailed Comments to Restructure the MUTCD as a Proactive Safety Regulation (5/14/2021, pdf)