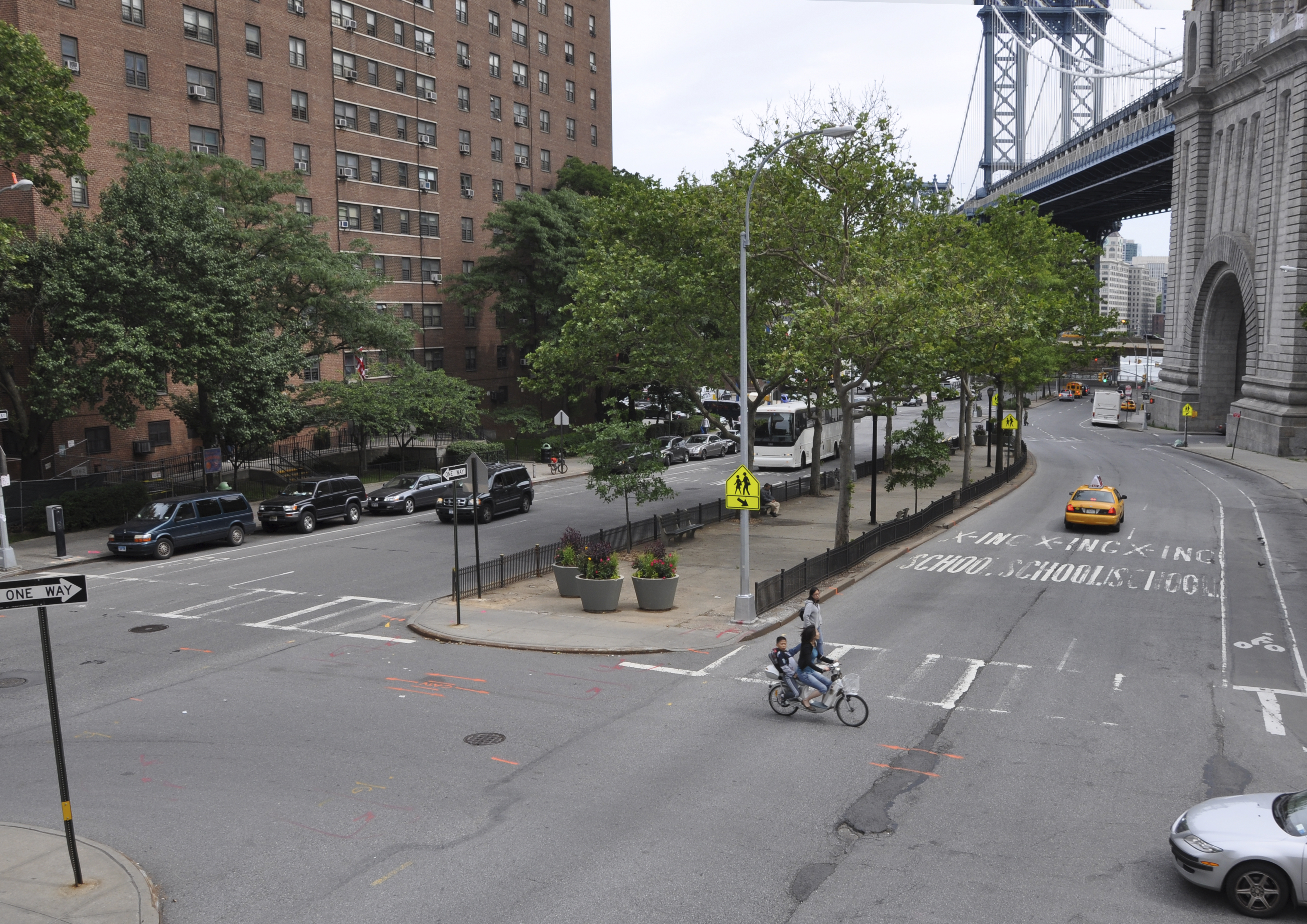 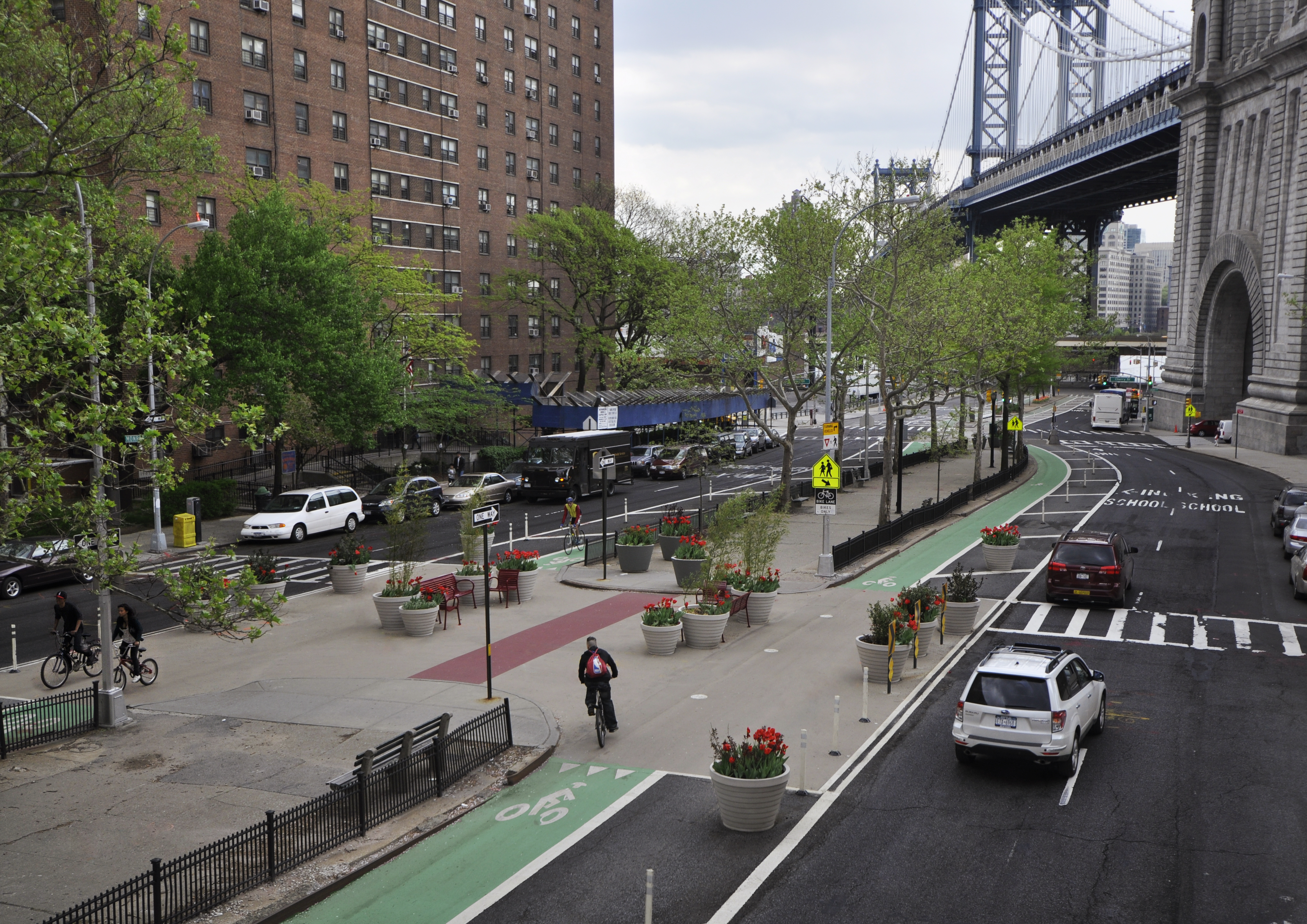 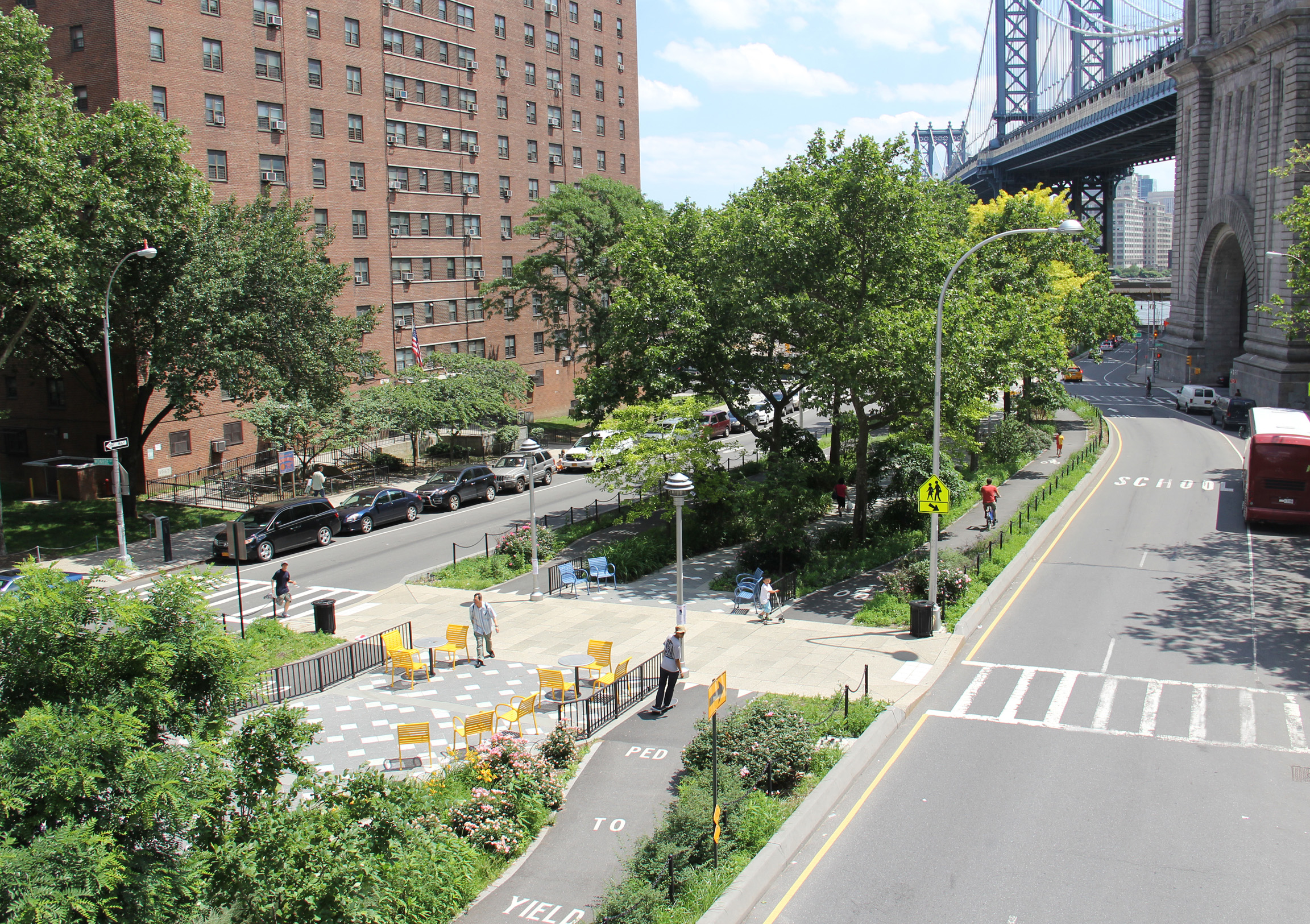 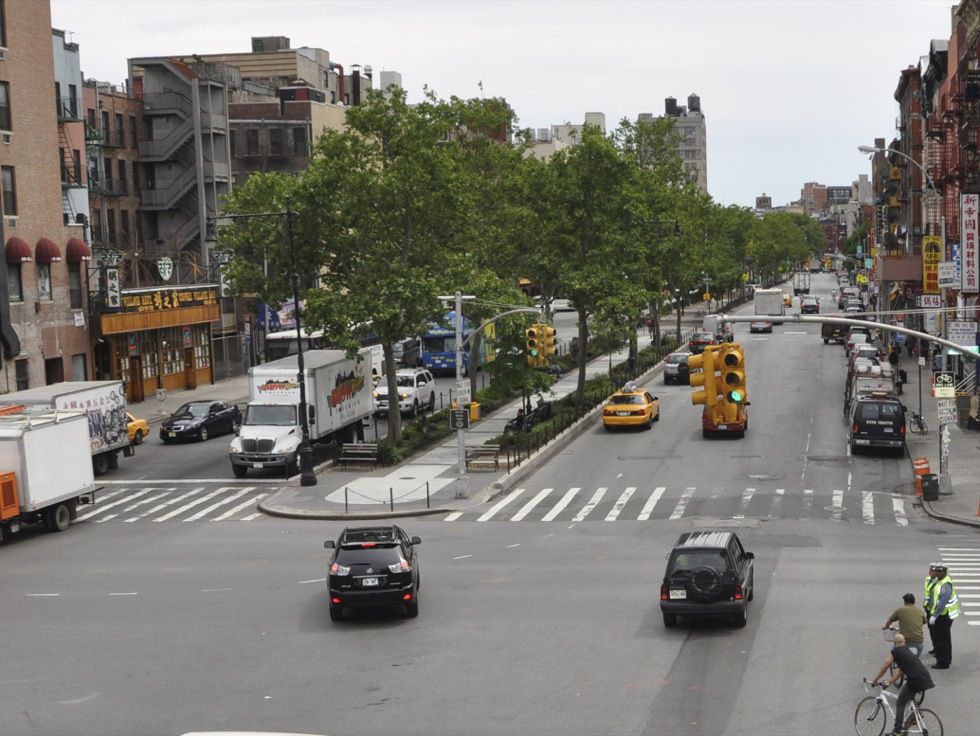 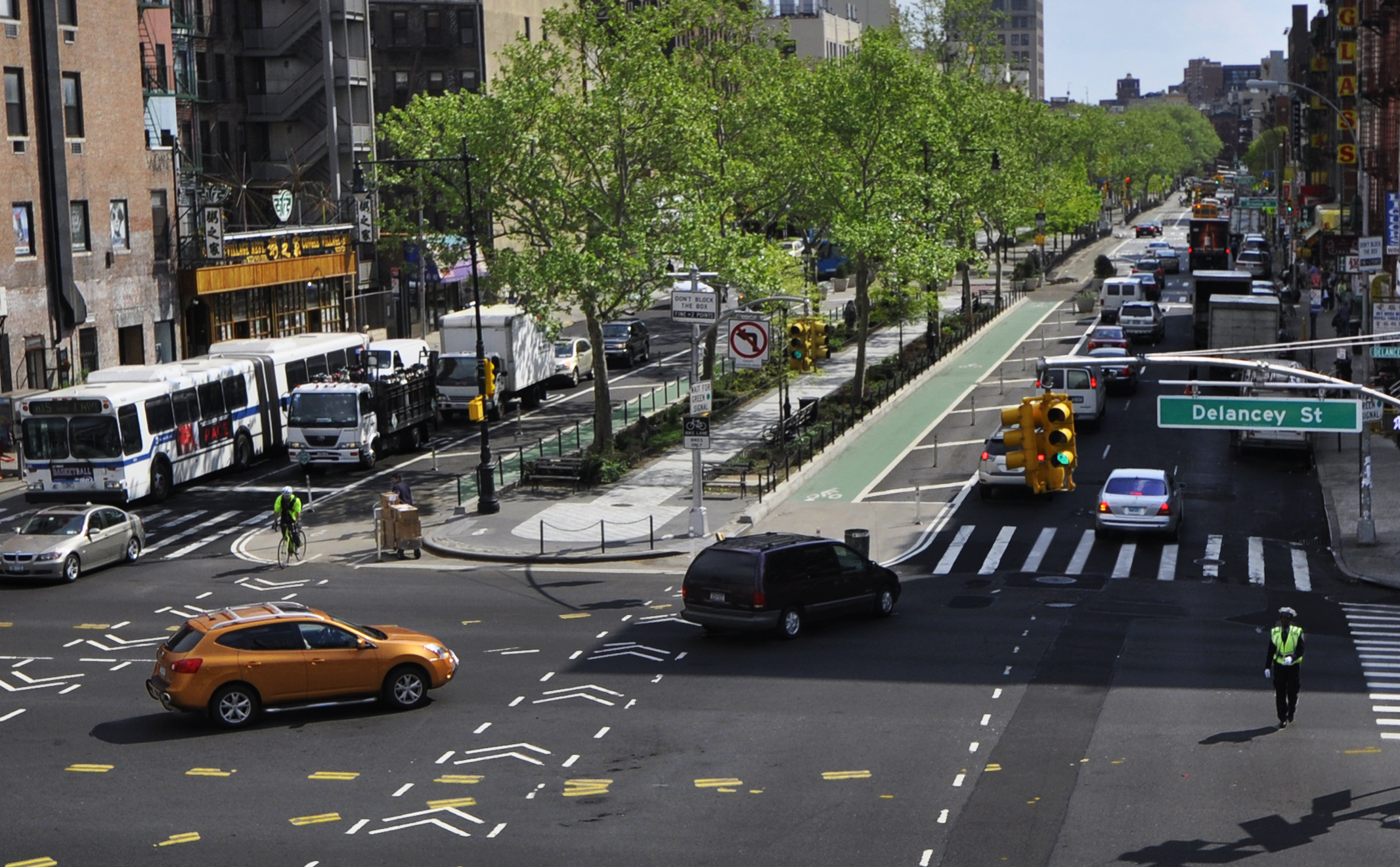 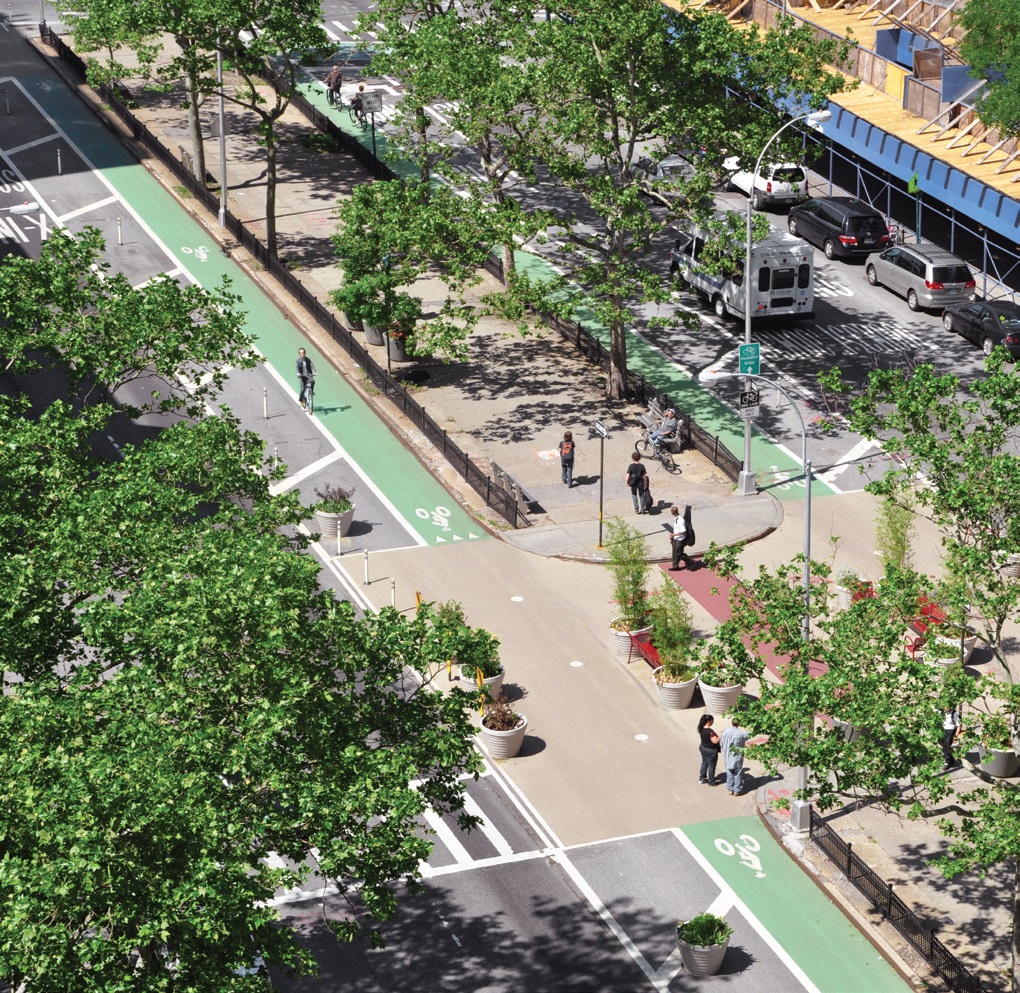 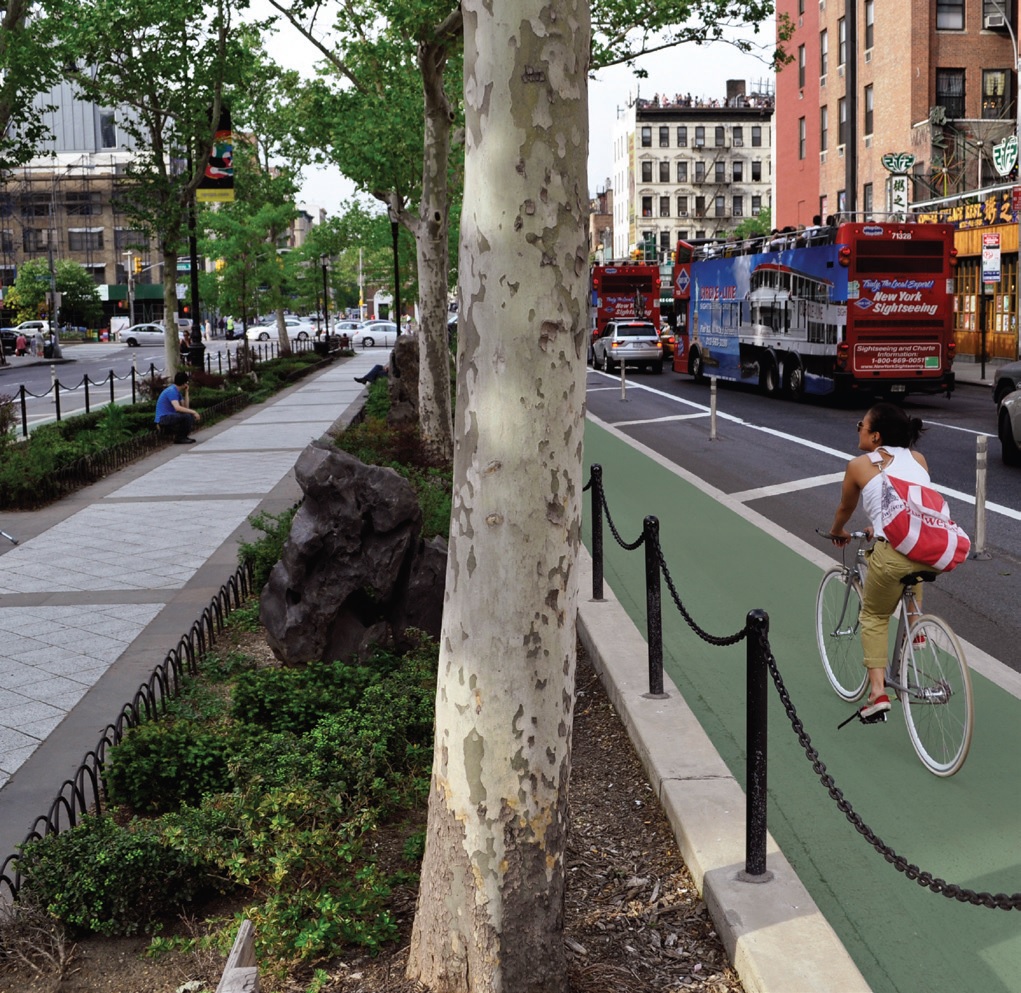 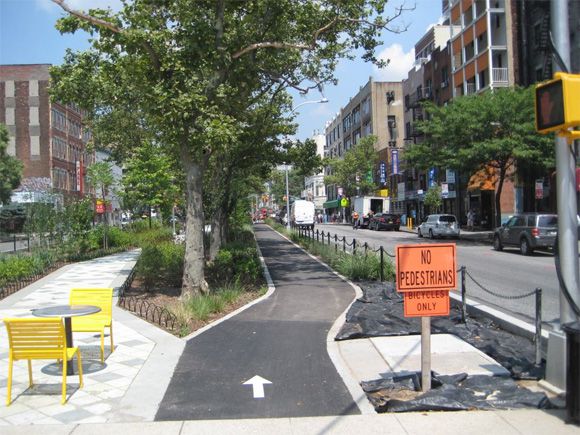 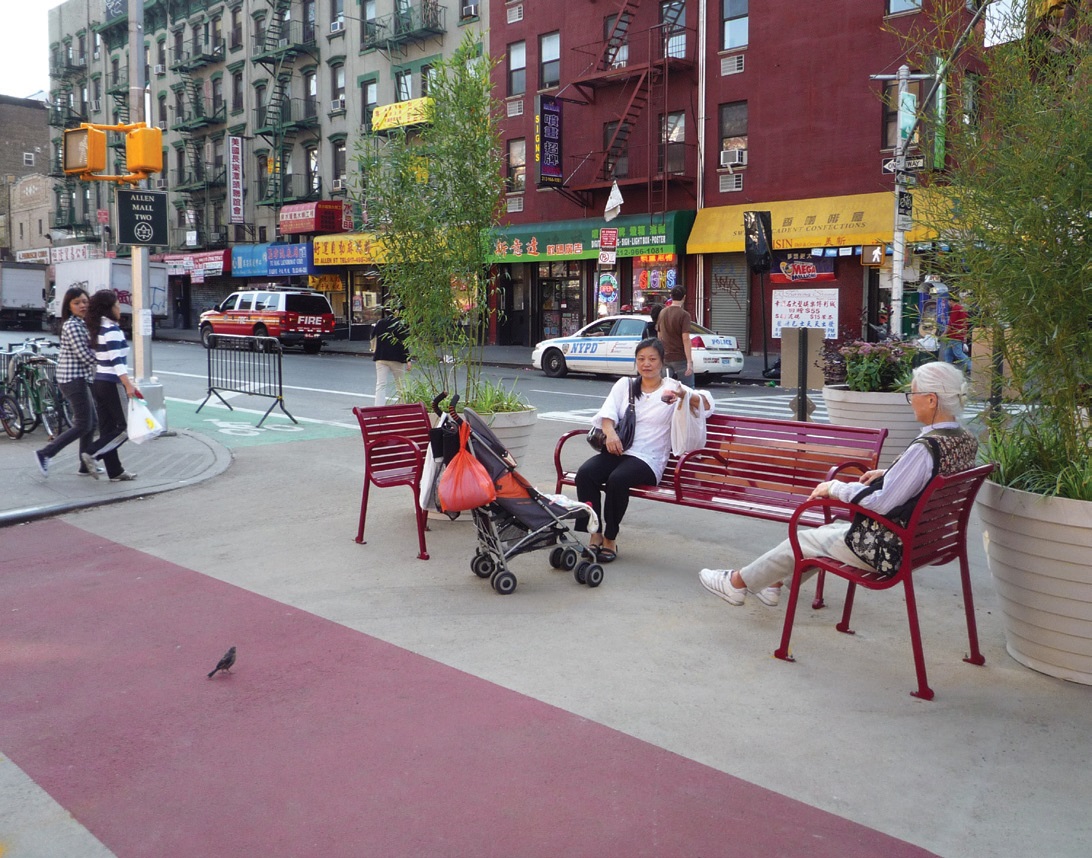 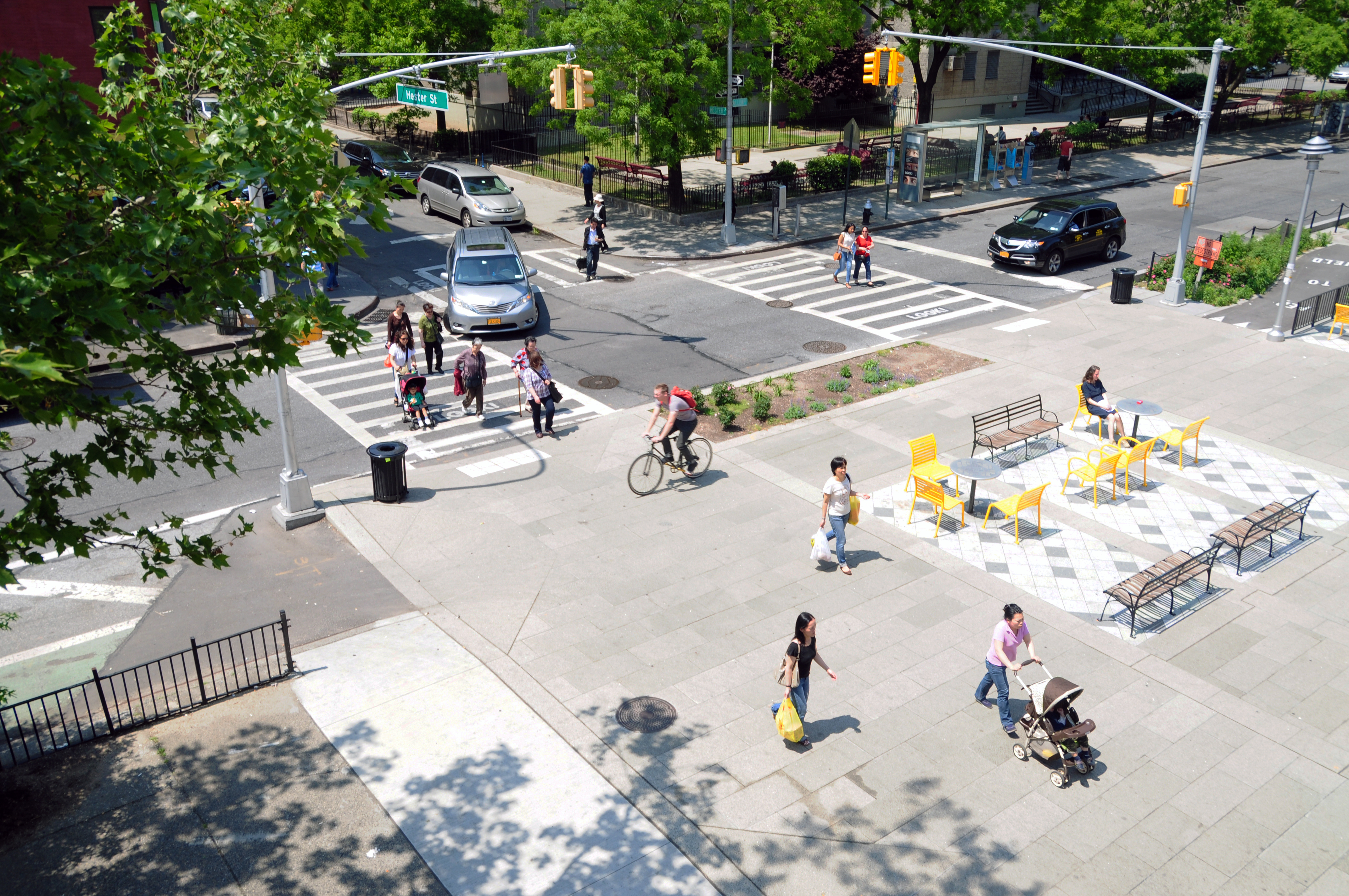 New York City’s Allen and Pike Streets safety improvement pilot project demonstrates how cities are using relatively inexpensive treatments to improve the quality of life for residents and the business community. Excessive speeding and unpredictable movements, along with underutilized public space, raised safety and access issues to the most vulnerable road users. In 2009, DOT transformed Allen/Pike into safer, pedestrian-friendly boulevard by installing public plazas, new signals, pedestrian refuge islands, separated bike lanes, and benches and planters. Post-implementation evaluation along the corridor showed significant reductions in injuries. In addition to the safety benefits, the corridor was chosen as one of the city’s first Select Bus Service routes with off-board fare collection and transit signal prioritization. Allen/Pike Street project demonstrates how cities are using low-cost treatments to improve pedestrian and bicycle safety and access.  This project’s interim design process and evaluation methodology provides cities with tactics that can help generate support for further funding and more permanent construction.

Allen and Pike Streets in New York City run through the heart of Manhattan’s Lower East Side between Delancey Street and the East River waterfront. The northern side has a larger concentration of commercial uses, while the south side is a mix of both residential and retail. Although car ownership is low in the neighborhood, the two-mile corridor is a popular traffic route due to its proximity to the Manhattan and Williamsburg Bridges.

In 2009, community groups called upon DOT and Parks to transform Pike/Allen into a safer, more inviting pedestrian boulevard. After identifying potential areas of improvements along the corridor, DOT presented plans to Manhattan Community Board 3 Transportation Committee (CB3) in February 2009, and again in March 2009 to address questions and concerns with the initial design. DOT modified the plan based on community input and presented the final plan to CB3 in April 2009. Design modifications included widening the pedestrian malls and eliminating two public plazas from the final plan.

DOT reconfigured the roadway from three travel lanes to two travel lanes. The bicycle lanes were relocated from the curb to the left side between the pedestrian mall and travel lane, diminishing many of the cyclist-vehicle conflicts, while providing a more comfortable riding space along the planted median. A 9’ striped buffer separated the travel lanes from 6’bike lanes, and utilized flexible bollards and planters to create vertical separation. Installation included colored asphalt to distinguish lanes from the street, as well as shared lane markings through the intersections. The new protected bike lane provided access to the East River Greenway and added close to 2 miles to NYC’s bicycle network.

Construction took place between August and January 2010. Markings and pedestrian refuge islands were installed earlier in the construction timeline, followed by public space  enhancements and signal installation and activation. Notifications were distributed to residents and business along the corridor with construction details. DOT held a community meeting in September 2009 to update residences and businesses on project progress.

Basics maintenance and upkeep of the project site is shared between Parks Departments of Sanitation, and DOT. Sweeping and plowing of bike lanes is a shared responsibility between Sanitation and Park. Parks is responsible for median plantings , litter pick up  and up keep of fixed furniture.

Overall, this project demonstrated how low cost treatments can improve the safety for all road users.  The project rectified frequent turning conflicts between cars, buses, delivery trucks, bicyclists, and pedestrians. Data compiled following the installation of the protected bike paths and pedestrian improvements showed a 35% decrease in both motor vehicle and bike crashes involving injuries, and 12% decrease in injuries for pedestrian, cyclists, and motorists from Houston Street to South Street. Bike ridership increased by 43% northbound and 23% for southbound traffic.  The project additionally provides inviting public spaces and improved access to the East River Greenway.

Project success has led to a more permanent build out of the pedestrian malls and plazas, adding seating areas and seasonal plantings. In 2012, sections of the median were upgraded from an interim to a permanent design. The protected bike lane was raised and redesigned to ensure a higher level of comfort to novice cyclists. Once additional funds are secured, temporary treatments will be made permanent along the corridor.

Four malls were connected and closed to cross-traffic with roadbed plazas defined by color-coating, planters and fixed seating. These were cross-streets with little utility to the traffic network, but their elimination improved the usefulness of the protected bike lanes and eliminated multiple conflicts from the crosswalks at each of the four intersections