In 2010, cities banded together to develop a first-of-its-kind document: bikeway design guidance developed by cities, for cities. This document, the NACTO Urban Bikeway Design Guide, sparked a design revolution in cities nationwide, where city ingenuity and values were elevated, in service of safe and vibrant streets and transportation networks. In the decade since the Guide was first published, redesigned city streets, for many decades an afterthought, are now widely seen as key to stemming North America’s safety, equity, and climate crises.

Today, we’re thrilled to announce the next chapter of NACTO’s bike design guidance. Over the next year, we’ll be releasing several working papers expanding bikeway guidance. These papers will cover the most critical gaps in vetted guidance for cities, including best practices for data collection, network design, equitable network design, and scaling success to better meet the challenges of our time.

And this work will feed into an even larger resource. The lessons learned from the past 10 years, from the papers released over 2022, and from the NACTO network of 93 cities and transit agencies, will be codified into the next big manual. That’s right, in 2023, we’ll be releasing the long-awaited third edition of the NACTO Urban Bikeway Design Guide. Read on to see where we came from, where we’re going, and how cities will be raising the state of the practice for urban streets and transportation once again.

The Urban Bikeway Design Guide ushered in a new era of streets for the U.S.

Origins of the Urban Bikeway Design Guide
Biking has never been more popular: bike share systems across the country have record ridership, and bike shops are reporting months-long delays in obtaining new bikes to meet the demand for this increasingly popular transportation option.

Amidst this background, it’s hard to remember that just 15 years ago, there were only 26 miles of protected bike lanes on city streets across the US, in comparison to hundreds today.  While cities have always been engines of innovation, little more than a decade ago there was no codified resource for the new strategies and designs that cities were creating to make biking safe and comfortable, no manual guiding cities in how to implement these new designs in different settings.

And then, in 2010, NACTO released a first-of-its-kind guidance–developed by cities, for cities–giving cities the tools and a permission slip to build better bikeways on their streets. For the first time, cities were collectively codifying a new vision for city streets: safe, vibrant, and inviting to bike on, based on designs created by cities. We helped to collect, vet, and standardize these new treatments, formalizing them into a resource endorsed by USDOT and dozens of cities and states across the country. And by doing so, we collectively cracked the door open for a conversation about the role of city streets, and how they can meet our residents’ needs and cities’ goals more effectively. 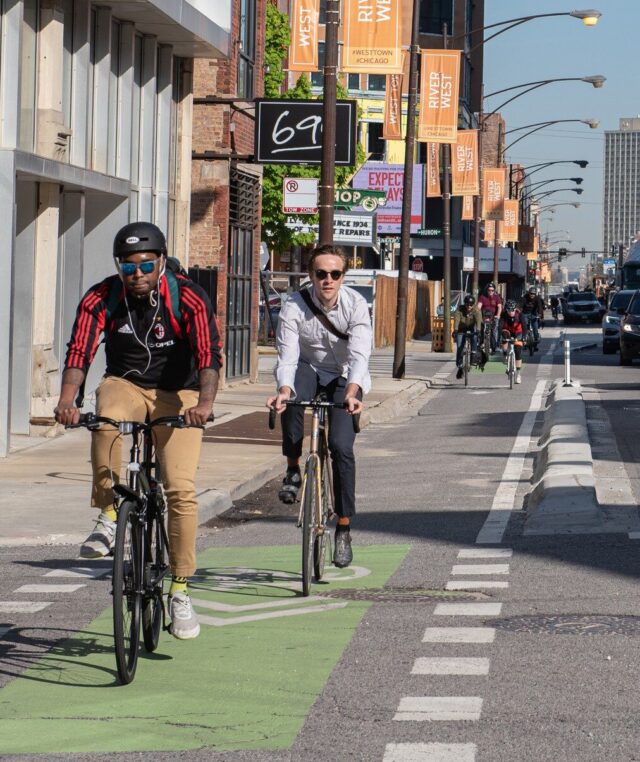 The Expansion and Evolution of NACTO guidance
Over the years, even the most innovative ideas get eclipsed by innovative ground-up thinking. And so, over the past few years NACTO has expanded the Urban Bikeway Design Guide. We brought our city network together to codify what types of treatments work best where, in Designing for All Ages and Abilities, to best practices for regulating shared micromobility systems to the thorniest of issues: intersections.

But we’re not done. Today’s bike networks have only just begun to meet tomorrow’s demands: shifting short trips away from private vehicles, reducing dangerous interactions with police officers and risk of serious injury or death for delivery cyclists, and stemming the increasing traffic death toll on our streets, which is most pronounced for people walking and biking. Our field has also reckoned with its inequitable past, and the ways in which planning, engagement, and political will (coupled with better guidance) can help us make progress toward a more equitable future.

A Down Payment
Throughout 2022, NACTO will release several working papers addressing the most critical issues cities face related to equitable planning, engagement, and implementation to build the bike networks that address today’s needs. Based on conversations across the NACTO network in listservs, conference calls, webinars, and conferences (such as the 2021 Bike Share & Share Micromobility Roundtable), over the next year NACTO will release papers on:

We’re taking this approach to remain flexible and responsive to the city staff we serve, with working papers more quickly providing vetted guidance to practitioners and build towards the broader guide update.

What’s Next
In 2023, we’ll release the long-awaited third edition to the NACTO Urban Bikeway Design Guide. It will serve as a holistic blueprint for implementing equitable, citywide bike networks that provide safe, sustainable, and equitable mobility options through crisis and recovery. Using what cities have collectively developed, from the first editions of the bike guide, to next year’s working papers, and more, the third edition of the Guide will be, as always, built by cities for cities, pushing streets forward to meet the needs of our time.

We’re excited to share the first installment of the next evolution of bike design guidance after the new year. What was once unimaginable is now routine, with millions riding bikes and scooters every year to work, to school, to meet friends, and for doctors appointments. Cities are at their best when they meet the needs of their residents, and we’re proud to work together to raise the state of the practice yet again.

Read more about NACTO’s Cities for Cycling network and program >