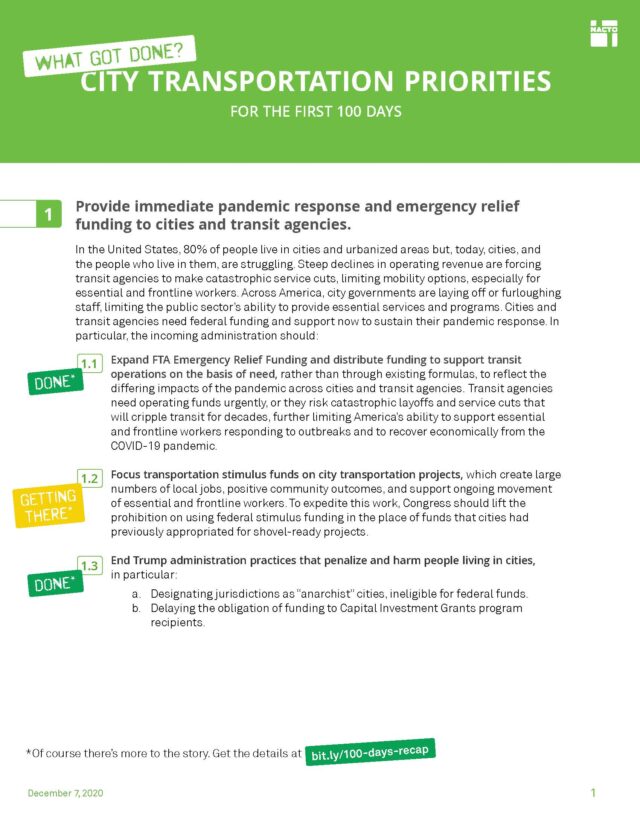 What got done? A report card on Biden’s first 100 days

Just over 100 days ago, National Youth Poet Laureate Amanda Gorman read “The Hill We Climb” at President Biden’s inauguration. Since then, Biden and his administration have passed the long-needed American Rescue Plan, forestalling a collapse of the country’s essential transit systems and city-provided services, as well as set ambitious goals for climate, equity, and economic recovery.

In December, we outlined the concrete steps that Biden and his team could take to chart a new course for American mobility that puts people first. 100 days later, we find ourselves heartened by the stated priorities of Biden, Buttigieg, and their teams, and by the sweeping and ambitious goals set in Biden’s infrastructure proposal.

From Secretary Buttigieg’s statements on the importance of multimodal streets to the racist history of highways, to Vice President Harris’ recent remarks linking quality transit to a higher quality of life, there is clear intention behind the administration’s rhetoric, and we applaud the Administration for making the case publicly for a long-necessary reset of America’s transportation priorities.

However, 100 days into his term, we’re still waiting to see concrete action from the Biden administration on many items, some entirely within his administration’s control. One example: Safety standards for vehicles (NHTSA) remain unchanged despite their potential to reduce the 40,000 deaths on American roads each year.

We’re also waiting to hear USDOT’s next steps on fixing the obscure but highly-influential MUTCD. FHWA’s extended open comment period for the manual ends May 14th, and we’re collecting hundreds of needed edits from our 89 member cities and agencies. Substantially reframing the document will help practitioners around the country take steps to achieve Biden’s climate targets, and address longstanding racial inequities on our streets. And it’s entirely within the Administration’s control.

1.1: Expand FTA Emergency Relief Funding and distribute funding to support transit operations on the basis of need.
The American Rescue Plan included $30.5 billion for transit agencies, preventing debilitating cuts to service for the country’s transit riders. Of note: This allocation set a new precedent of federal funding for transit operations (not just capital construction); making this type of support permanent will enable transit to provide access to opportunities for more Americans, aiding in a more equitable economic recovery.

Priority 2: Set forth a multi-modal vision for US mobility to meet the challenges of the 21st century.

2.1: Set forth national performance metrics to track progress toward key safety, equity, and climate goals.
On Earth Day, President Biden made a bold and necessary commitment to cut in half the U.S.’s carbon emissions by 2030. This bold goal will only be met if the Administration sets and tracks concrete targets for reducing greenhouse gas emissions from transportation–the single largest source of carbon emissions in America. We’re still waiting on these firm commitments and performance measures. Without them, it’s business as usual with more driving, more carbon, and less climate progress.

2.2: Ensure cross-agency coordination by restarting a partnership between DOT, EPA, HUD, and DOE to advance holistic policies and programs.
The Biden Administration has publicly set very ambitious targets for itself around climate and equity. Every federal agency has a role to play in bringing about change, and action will be more effective if agencies can work together. While there may be efforts underway internally, we have not publicly seen the creation of a formal working group across agencies overseeing sectors with major climate and equity impacts.

2.3: Designate an official liaison for cities in the USDOT Secretary’s office to help elevate city transportation voices in national policy-making
Charles Small was appointed Deputy Assistant Secretary of Intergovernmental Affairs at USDOT earlier this year, establishing a connection for local governments to connect with Washington and improve federal transportation policy by sharing their experiences and expertise.

3.1: Champion the INVEST Act with key additions
While we’re still waiting to see a surface transportation reauthorization proposal from the Administration, priorities outlined in the recently released American Jobs Plan are trending in the right direction. We were pleased to see major investments in transit, state-of-good-repair, road safety, and equity in that proposal and look forward to working with Congress and the administration to shape legislation that will lay the groundwork for more just, sustainable mobility options nationwide, rather than doubling down on the mistakes of the past.

Notably, USDOT has made important progress on congestion pricing by shifting New York City’s languishing plan into action, authorizing the MTA to complete an environmental assessment. This is a critical step in implementing this forward-thinking policy; we hope to see more supportive actions like this out of the administration.

3.2: Refocus discretionary (e.g. BUILD) and formula (e.g. HSIP, CMAQ) grant programs to prioritize city transportation projects that meet the Administration’s sustainability, mobility, and equity goals.
The Biden administration rebranded BUILD as RAISE (Rebuilding American Infrastructure with Sustainability and Equity), and adjusted it to prioritize projects that make improvements to racial equity and mitigate impacts of the climate crisis. While projects have not yet been awarded, this signals a hopeful departure from the priorities of the prior administration, when the BUILD program was found to disproportionately favor road building in rural areas. The cap on individual awards for RAISE projects remains set at $25 million, a rigid restriction that inhibits broader participation among US communities.

Priority 4: Overhaul federal design standards to meet the safety & mobility needs of urban areas, and to streamline approvals for projects that support the Administration’s sustainability and equity goals.

4.1: Task FHWA with implementing NTSB’s recommendation to replace speed-limit-setting rules that make use of the 85th percentile methodology
No word out of Washington about their intention to follow best practice and replace the dangerous method of setting speed limits based on the behavior of speeding drivers with context-sensitive, evidence-based approaches. We’re standing by to support whenever USDOT is ready.

4.2: Update FHWA design guidance, such as the Manual on Uniform Traffic Control Devices (MUTCD), to ensure that safety on urban roadways is not jeopardized by guidance intended for lower-density and rural contexts.
The MUTCD is an obscure document with outsize influence, dictating the design of nearly every street in America. NACTO, national organizations, and cities across the country are pushing for FHWA to reframe and rewrite the MUTCD to center safety over the manual’s current focus on vehicle throughput as the highest and best use of city streets.

The Administration did extend the comment period for the MUTCD, and we are currently collecting and collating hundreds of comments from our 89 member cities and agencies to improve the document. These edits would, at the very least, help ensure that this federal regulation no longer impedes cities from using proven designs to improve safety. We look forward to working with FHWA to set a new course for safety on our streets.

4.3: Leverage NHTSA’s authority to set a “floor” for vehicle safety and sustainability in the US.
Through the National Highway Traffic Safety Administration (NHTSA), the federal government has the regulatory authority to center safety and climate goals in motor vehicle standards. (As one example, championing smaller fire trucks could have an outsized effect on road safety.) So far, we have not seen NHTSA take noticeable action to apply its broad authority to support the administration’s climate, equity, and safety goals. That said, there is a bright spot: new fuel efficiency standards are coming for passenger vehicles in July. (We’re still waiting on the tax credit for e-bikes, though.)

The Biden administration’s actions to date suggest a recognition of how improved mobility is integral to tackling the multiple crises facing our country, and the ways the federal government can leverage its power to support cities, transit agencies, and the people they serve. We commend actions the President’s team has taken to date, while recognizing that there’s much more work to do to set the U.S. up for a just recovery, meet the looming climate crisis, and address the structural racism that limits access to opportunity.

On the horizon: Biden’s American Jobs Plan has the potential to be truly transformative and reorient America’s transportation program in ways we haven’t seen in decades. However, the devil is in the details with a plan this visionary, and relies on Congress to be realized to its full potential. So far, we are excited about the scope and ambition of the proposal, particularly the funding to support robust, reliable transit and a first-ever sweeping focus on roadway safety for people outside of vehicles. We look forward to continuing to work with the administration, building on the positive path they’ve started on, to define the concrete policies and programs that will make the administration’s ambitious vision a reality.