We cannot reduce traffic fatalities on US city streets without reducing speeds.

More than 35,000 people die in traffic crashes on US roads each year, and millions more are seriously and often permanently injured. The United States has the highest fatality rate in the industrialized world; double the rate in Canada and quadruple that in Europe. While traffic fatalities may seem like an intractable issue, city governments have the power to reduce the frequency and severity of traffic crashes by reducing motor vehicle speeds.

Addressing speed is fundamental to making streets safer. Vehicle speed increases both the likelihood of a crash, as well as the severity of the crash, as it diminishes drivers’ ability to recognize and avoid potential conflicts. In addition, on streets with higher speeds and higher speed limits, traffic engineers have fewer design options to increase safety.

In cities, transportation agencies have long understood that motor vehicle speed plays a key role in fatal and serious crashes, and have sought to reduce speeds through design and regulation in order to save lives. But speed limit reductions have remained out of bounds for many city transportation agencies because authority over speed limits, even on city streets, is often held at the state level, and is commonly tethered to the practice of using the existing speeds on a street to determine what the speed limit should be. This flawed model uses the current behavior of individuals to determine the speed limit, instead of allowing engineers and planners to set the limit at the speed that will create the best, safest conditions for all road users. The result is higher speeds and speed limits over time.

Practitioners often find themselves with limited recourse to address these challenges because they lack an alternative method for setting speed limits in urban areas. In many places, cities have turned to increased police enforcement to compensate for restrictive engineering and speed limit setting policies, a practice that is not proven to reduce serious injuries or fatalities, and often increases risk for Black, Indigenous, and people of color (BIPOC) on city streets. 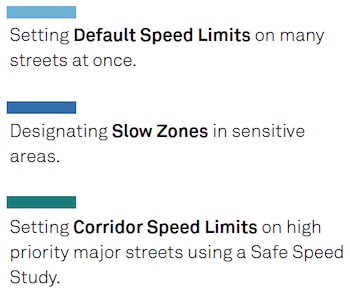 City Limits maps a new path for US cities, codifying speed limit setting best practices that have been tested and documented in cities across North America. Cities can create better and safer outcomes for all by adopting these speed limit setting practices as part of their traffic fatality reduction or Vision Zero programs. By managing speeds, cities can save lives.

In 2018, NACTO convened a working group of major US cities to develop new robust guidance for setting speed limits on urban streets that could provide an alternative to the highway-focused federal recommendations. Over the course of the following 18 months, transportation staff from 19 cities helped to write and review the guidance and provided technical expertise based on their experience developing speed management strategies and programs and implementing lower speed limits in their own cities.

The resulting guidance, City Limits, provides cities with clear technical and policy guidance on setting safe speed limits on city streets. All of NACTO’s Member Agencies (81 members at the time of final review) have approved this guidance. The technical guidance and recommended maximum speed limits in this document are based on input from NACTO member agencies, academic studies about speeds that minimize conflict and risk, and best practices in cities across the world.

Unlike existing national guidance, City Limits focuses on urban streets, which pose the most challenging scenarios for determining speed limits and are where the majority of pedestrian and cyclist fatalities occur. In this document, urban streets refer to most of the categories of streets found in North American cities, including local, primarily residential streets, mixed use corridors, transit corridors, high density downtown streets, and urban arterials with commercial, residential, or retail uses along one or both sides. This guidance is also applicable on streets like these in non-urban areas. This guidance is not applicable on limited access streets, even within cities, or on rural or very low density streets with limited multimodal use.

Finally, the speed limit setting guidance contained in City Limits is only one piece of a larger, essential discussion around how to make streets truly safe for everyone. Speeding vehicles pose a significant, specific, and deadly threat, but comprehensive safety on city streets and public spaces involves a more holistic consideration of risks—from accessibility to gender identity-based harassment to racial violence. In particular, speed enforcement as currently practiced poses additional, disproportionate health and safety risks especially to Black and Latinx people. Manual police enforcement is a less effective way to manage speeds down over time than street design and engineering changes, and can create dangerous physical and mental health impacts for Black, Indigenous, and people of color (BIPOC), as well as other marginalized road users. This resource touches on speed enforcement, but it is not the focus of this guidance. City Limits addresses speed limit setting policy which, paired with street design, is the best tool for reducing the health and safety risks posed by vehicular speeds.