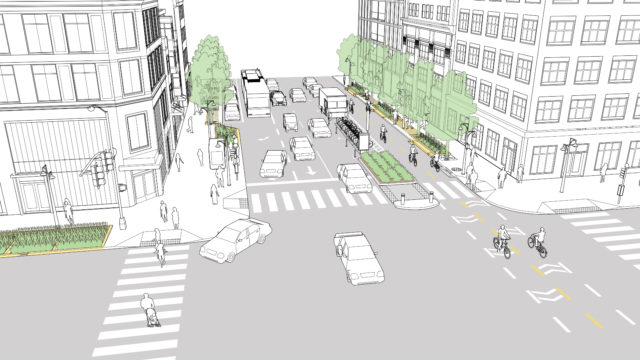 Busy urban streets play a central role in cities, and their comfort for people is a critical factor in cities’ success. Often found downtown or serving as major multi-modal corridors, ultra urban streets have dense activity and strong demand for street and curb space throughout the day. While ultra urban streets are challenging to retrofit for stormwater management, the benefits of green infrastructure are greatest here: shade for public space and sidewalks, good drainage for bikeways and crosswalks, beautification at transit stops, and the capture or filtration of otherwise polluted runoff. 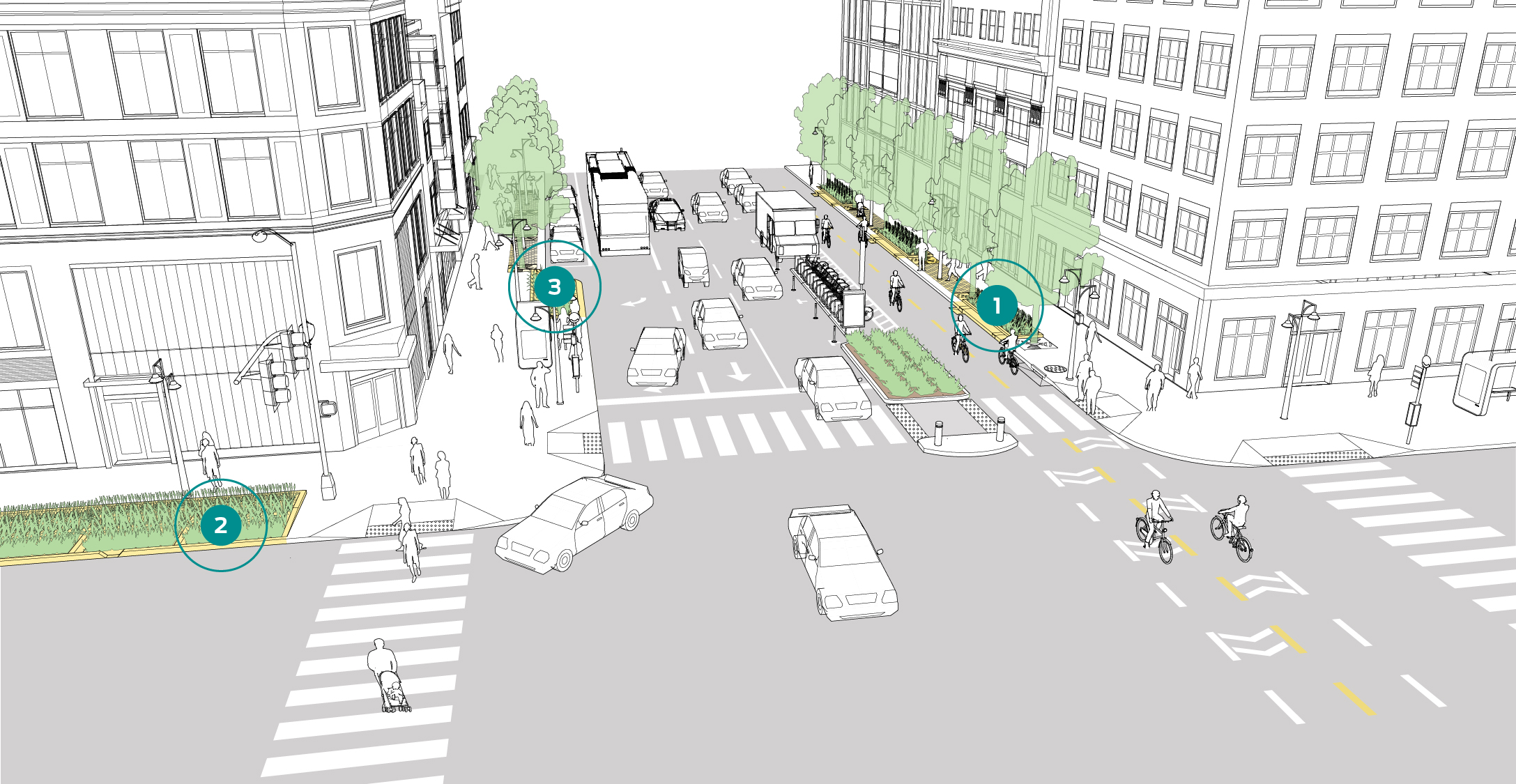 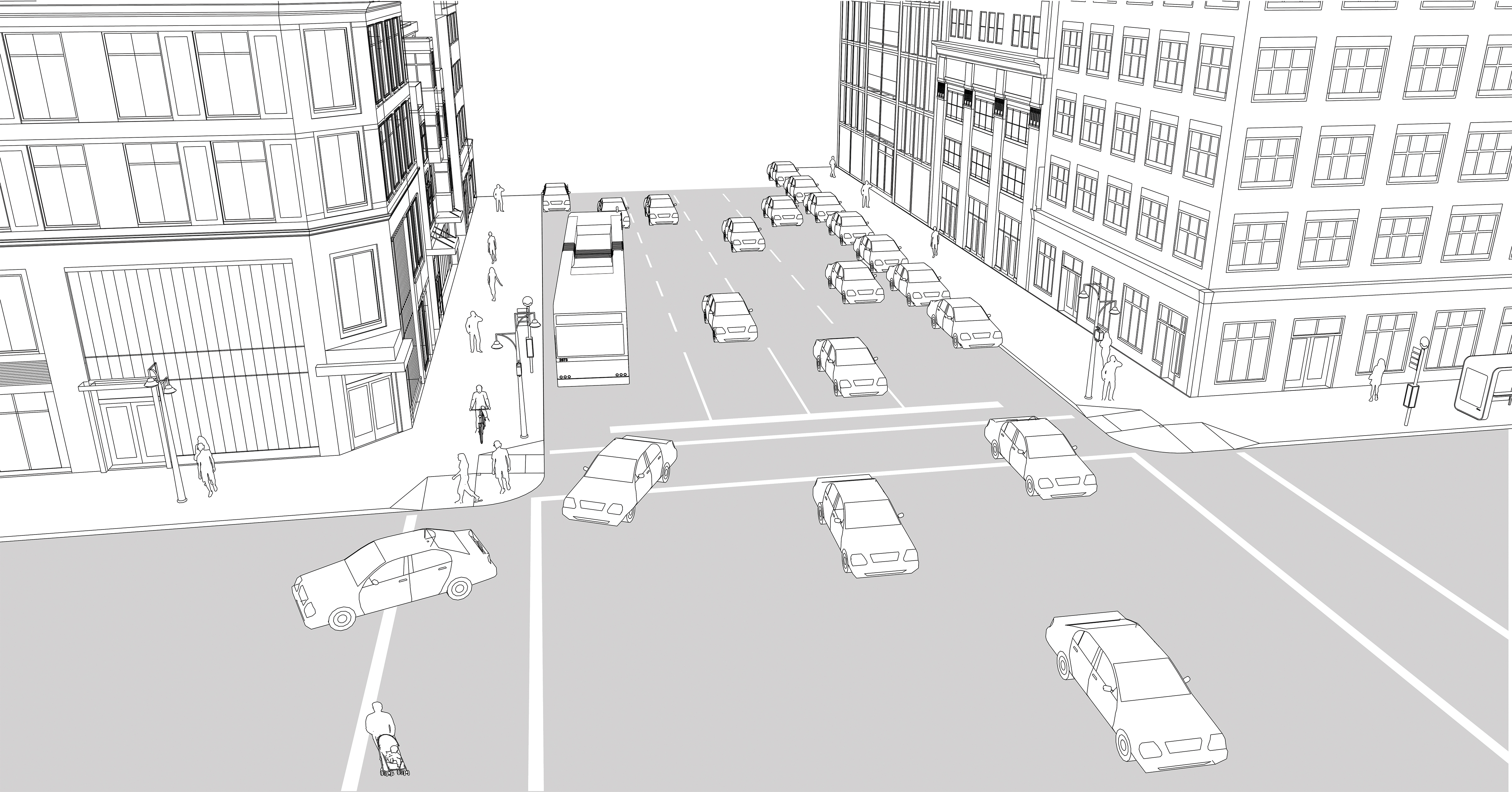 Shade and wind shelter are often scarce on ultra urban streets; street trees are  undersupplied and wind tunnels are common.

GSI is often most effectively integrated into the planting/furnishing zone between the curb and pedestrian through zone, where sidewalk width allows. In the illustrated example, a series of “on-line” bioretention planters infiltrate runoff, each conveying overflow to the next planter.

Siting GSI on lower-volume side streets may ease maintenance demands, particularly if there are concerns about people driving motor vehicles into curbside facilities.

Where GSI competes with pedestrian activity for sidewalk space, deeper bioretention planters with vertical sides maximize retention volume while minimizing the amount of sidewalk space required. Maintain a comfortable pedestrian width (typically 8–12 feet in dense contexts) when siting GSI on the sidewalk to prevent people from stepping into facilities.

Biofiltration planters that provide water quality treatment and reduce runoff volumes are effective where water cannot be infiltrated into the sub-base, such as locations with seepage into basements, transit tunnels, or underground utility corridors.

Where bioretention facilities compete for space with subsurface utilities, consider using small but frequent bioretention cells and reroute utilities for short distances. Permeable pavements may be implemented as well to reduce point-load of stormwater onto subsurface infrastructure.

As pedestrian volume increases, bioretention facilities should either be shallower or have visibly differentiated edge treatments (potentially including short curbs or low fencing) to reduce the risk of stepping in the planter. Integrate seating and placemaking elements into the bioretention facility to promote green streets as places for people.

Avoid blocking sightlines between transit operators and waiting passengers; site larger trees along the back of the transit shelter or sidewalk, and use low vegetation for green facilities at the near edge of the transit stop (see Stormwater Transit Stops for further guidance).

In many cities, downtown business improvement districts or similar organizations partner with cities to provide vital maintenance functions, and can be essential partners in supplementing maintenance efforts on planted bioretention facilities.