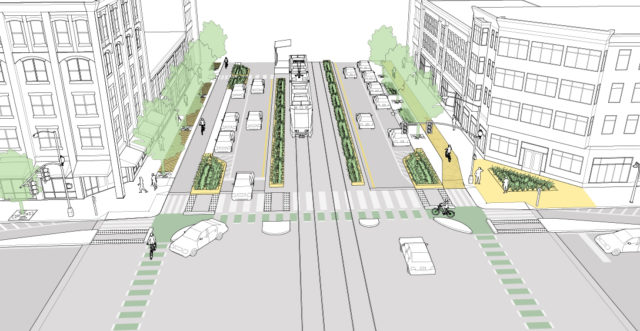 Upgrading to a high-capacity rail or bus transit line within the street often involves significant capital investment or full reconstruction, creating an opportunity to reframe the entire form and use of the street. Green stormwater infrastructure is integrated comprehensively in this street, recasting a large impervious expanse of pavement into a high-performing stormwater street that provides an attractive and safer street for people, both on transit and off. 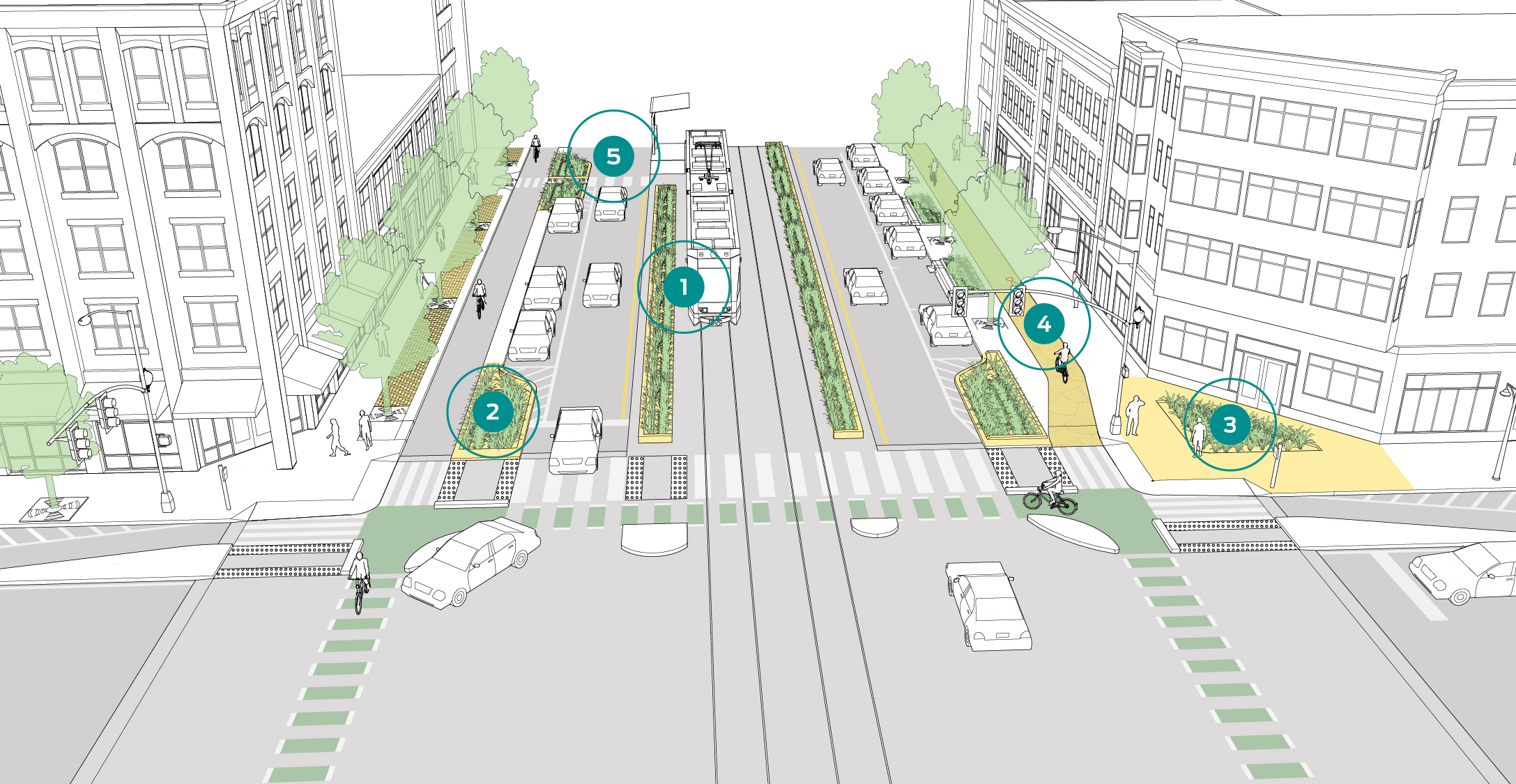 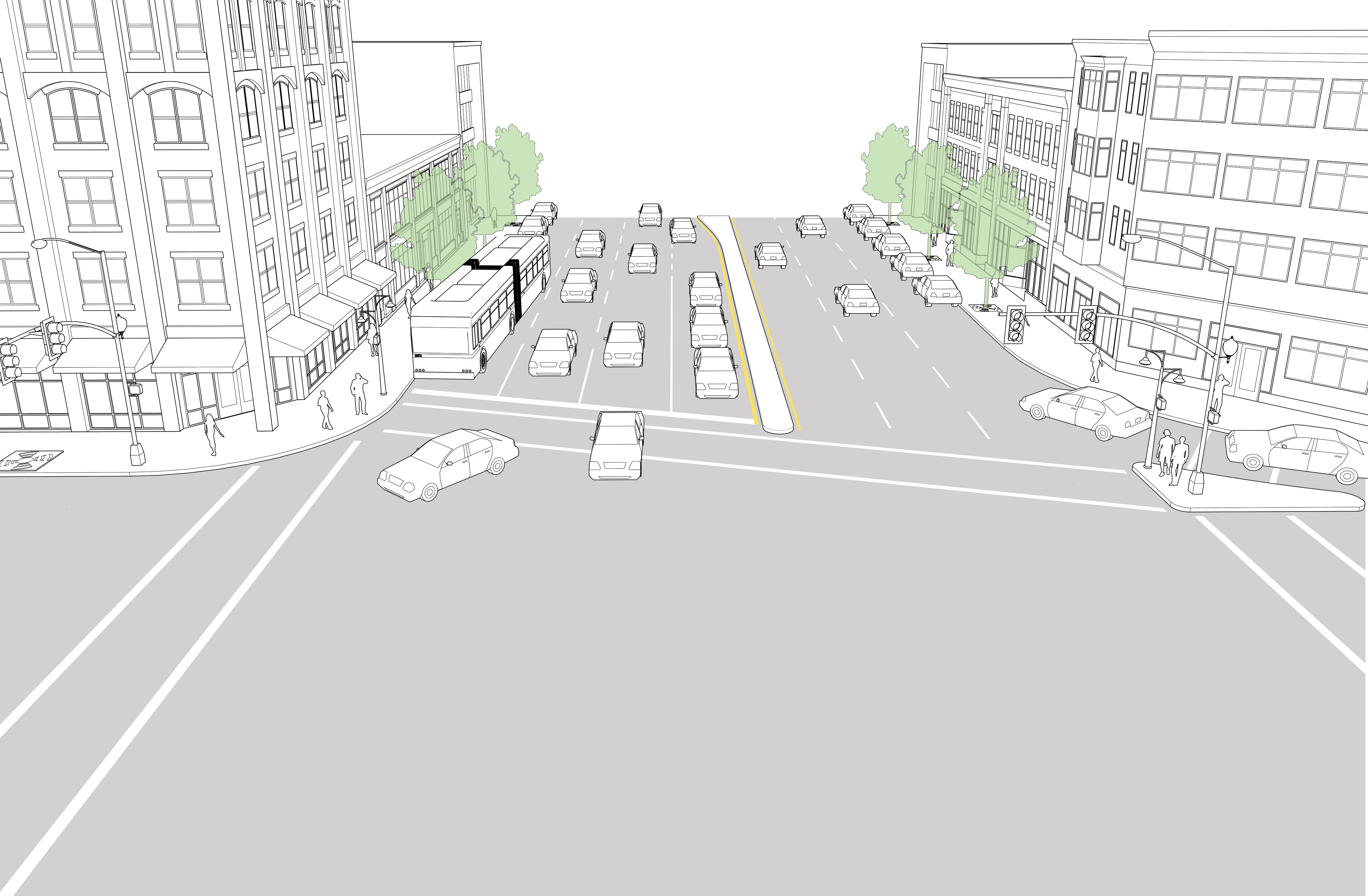 These wide streets are often designed for peak hour automobile volume, and are underutilized throughout the rest of the day and have not been optimized for transit. Over-provision of motor vehicle space results in frequent speeding and poor walking and biking conditions, degrading the public realm and depressing adjacent property values and land uses that would generate activity.

Dedicated right-of-way for high-capacity travel modes may itself be integrated with stormwater facilities; rail guideways or concrete busways involve large continuous linear spaces, which can be outfitted to infiltrate stormwater without interrupting accessible paths. As illustrated, linear bioretention planters capture stormwater as sheet flow (unchannelized runoff) from the transitway. Curbs are not necessary alongside fixed guideways, but are recommended next to motor vehicle or bicycle travel lanes to reduce incursion.

The slip lane, which had enabled unsafe high-speed turns, is closed and its footprint reallocated to a large bioretention planter. A pedestrian walkway is provided along the diagonal desire line, creating an opportunity for informational signage and placemaking.

Protected bike lanes and raised cycle tracks provide safer and more comfortable bicycling conditions for people of all ages and abilities, distinct and separate from both the sidewalk and motor vehicles. Permeable pavement may be used on the bikeway: use pervious concrete or porous asphalt to ensure the surface is compatible and comfortable for bicyclists. If at street grade, runoff from the street can be directed into the permeable bikeway; if raised, the permeable bikeway can absorb sidewalk sheet flow. Plan regular maintenance work to ensure the permeable pavement does not get clogged with sediment.

Mid-block signalized crossings are opportunity sites for bioretention facilities, such as mid-block curb extensions. Plantings must be low to maintain sight lines, especially just upstream of the crossing. Provide accessible paths and ramps to the crossing with vertical or other detectable elements separating paths from the stormwater facility.