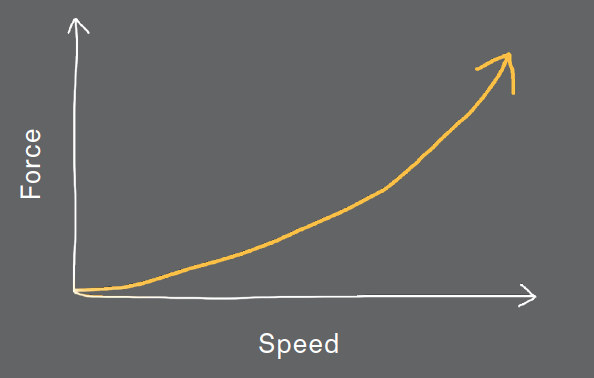 Drivers traveling at higher speeds have a narrower field of vision 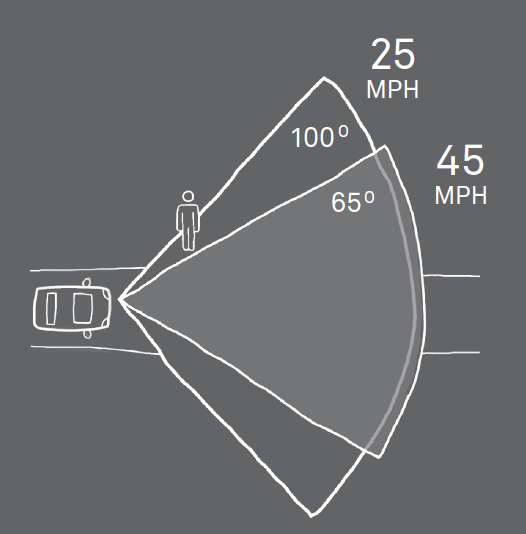 Drivers traveling at higher speeds travel further before they can react

Urban arterials are typically signed for 35-45 miles per hour or higher, and are designed to support high speeds by featuring wide, highway-width lanes, sweeping turn radii, and few places to stop for people to cross. In many cities, urban arterials often lack basic protections for people outside of cars, such as sidewalks, even when bus stops are present or when the adjacent retail/commercial land uses encourage people to go there.

In the US, the trend toward larger vehicles compounds the problems posed by excessive speeds. In 2017, 43% of pedestrian and cyclist fatalities involved an SUV, pickup truck or other light truck. In 2015, the National Highway Traffic 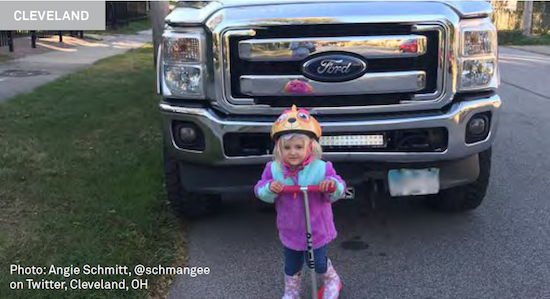 Safety Administration found that pedestrians are two to three times more likely to die when hit by an SUV or pickup than by a passenger car.

Larger vehicles are more lethal than smaller ones for two main reasons: they are heavier, which increases the force of the impact when combined with speed; and they have a taller frame, which increases the likelihood that, if struck, a person (especially a child) will be pulled under the vehicle rather than pushed onto the hood.

The US trend toward larger, more dangerous vehicles is only growing. SUVs and pickup trucks outsold sedans more than three-to-one in 2019, and companies like Ford and Fiat Chrysler have announced that they will stop producing the vast majority of their sedans and compact cars.

Shifting an entire system from unsafe to safe is not just an aspiration. Many US cities have adopted safety-first programs, to varying degrees of success. Vision Zero, Injury Minimization, and Safe Systems programs affirm safety as the top transportation priority and the most effective way to eliminate traffic fatalities. Establishing a safety-first program:

> Signals a commitment to zero traffic deaths on city streets
> Asserts a belief that such a goal is attainable
> Accepts the role of officials, engineers, and planners in making streets safer

US Aviation makes an impact

In 1997, the White House Commission on Aviation Safety & Security and the National Civil Aviation Review Commission released reports calling for the Federal Aviation Administration (FAA) and airlines to work together to reduce fatal accidents. In response, the FAA partnered with airlines to form the Commercial Aviation Safety Team (CAST), which uses incident data to discern safety priorities, deploys interdisciplinary teams to determine underlying crash causes, and applies interventions based on their findings.

In 2009, Continental Flight 3407 crashed, killing all 49 people on board and one person on the ground. Pilot error and fatigue were the listed causes. By 2013, the FAA dramatically increased both training and rest requirements for pilots. Humans in the commercial aviation industry make mistakes. However, a systems approach to safety has resulted in substantive safety gains across the entire industry.