The PHX Sky Train is an electric powered people mover which opened on April 2013 at Sky Harbor International Airport. Sky Train features a 100-foot tall bridge over Taxiway R, which is the first location in the world where a train passes over an airplane on an active taxiway. The bridge is tall enough to accommodate a Boeing 747. Three months after opening, the train is carrying about 70,000 people per week, which is 40% higher than estimated. The system is designed to carry 3,300 passengers per hour per direction. It operates 24-hours a day and averages a speed of 23 mph. The completed Phase I connects Metro Light Rail at 44th Street and Washington Street with Terminal 4 and the East Economy Parking Lot. The next phase, currently under construction, includes a connection to Terminals 3 and 2. A planned future phase will connect to the Airport’s Rental Car Center. To reduce curbside congestion, baggage check-in and boarding pass printing is available at the Sky Train Stations at 44th Street/ Washington Street and East Economy Parking Lot. A pet area for traveling animals was also built at each of these stations. The Sky Train 44th Street Station also features 8 bicycle lockers and 16 bike racks. 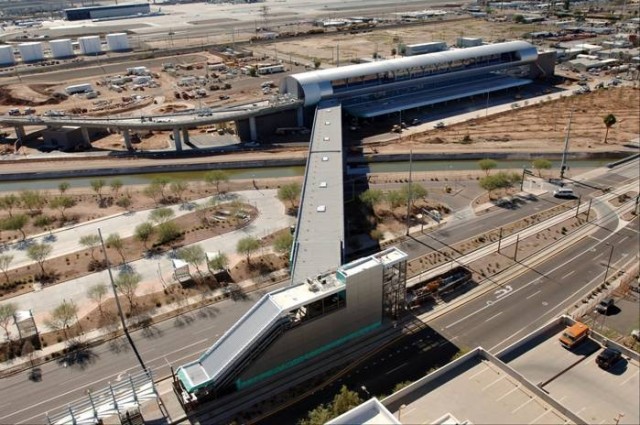