In 2014, Americans took 10.8 billion trips on public transit, the highest since the dawn of the highway era. But most of these trips are on streets that were designed to move private cars, with transit as an afterthought. On April 27, join Matthew Roe, Director of NACTO’s Designing Cities Initiative, and Dr. John Renne, Director of the Center for Urban and Environment Solutions (CUES) and Associate Professor in the School of Urban and Regional Planning at Florida Atlantic University in Boca Raton, Florida for a discussion about how NACTO’s new Transit Street Design Guide can help streets of every size be redesigned to create great transit streets, supporting strong neighborhoods and downtowns.

Special guest Bill Bryant, Deputy Director for Transit at Seattle DOT, will discuss how the RapidRide C Line Extension project on Westlake Avenue in Seattle transformed a major four-lane street in Seattle’s South Lake Union neighborhood, the rapidly growing home of Amazon.com. Learn from Seattle how in-lane bus stops, side and center bus lanes, and intersection design techniques can be put together to move buses – and their riders – faster on any street.

This event will be co-hosted by Island Press, NACTO, Strong Towns, CUES at Florida Atlantic University and the Transportation and Land Development Committee of TRB. 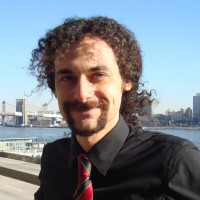