As cities look to redesign their streets to provide more safe mobility and transportation options for their constituents, new maintenance and operations challenges and opportunities arise.

The following case studies explore downsized street sweeping and snow plow equipment currently in use in Boston, Salt Lake City, Cambridge, MA, and Chicago. These case studies are an addendum to the Optimizing Large Vehicles for Urban Environments reports produced by the U.S. DOT Volpe Center for NACTO in 2018. 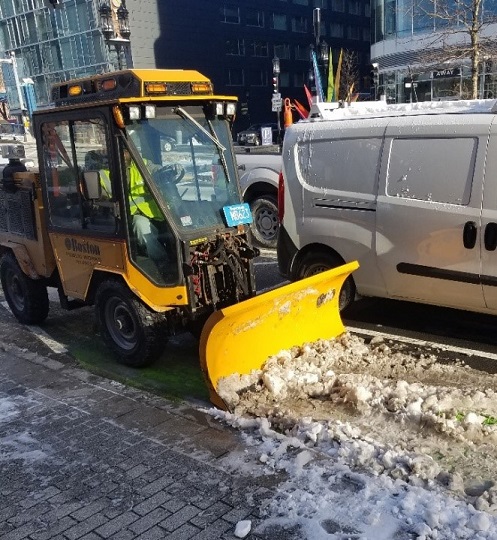 In 2016, the Boston Public Works Department (PWD) began purchasing downsized vehicles to maintain newly built protected bike lanes, in support of Vision Zero. The two agencies coordinate to ensure that PWD can maintain the infrastructure that Boston Transportation Department (BTD) builds. The PWD currently maintains a fleet of 17 (soon to be 21) compact sweeping and plowing vehicles from 6 different vendors.

Each vehicle in the city’s fleet has multiple uses, leveraging the initial investment. For example, Ventrac tractors can be used to clear parking lots and garages, while other sweeping and plowing vehicles are used for narrow streets and lanes, such as multiuse paths and protected bike lanes.

To ensure a strong, smooth roll-out and integration of the new vehicles in the fleet, Boston PWD prioritizes staff buy-in. Before the acquisition process begins, maintenance staff demo the equipment themselves in order to familiarize themselves with the new vehicles and gain understanding for the benefits of compact equipment. 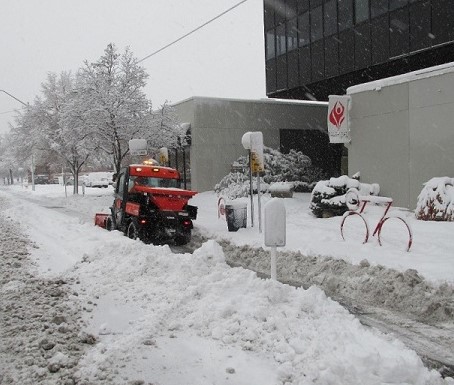 Salt Lake City built its first protected bike lane downtown in 2014, and now has 3 miles of protected lanes. With this mileage of lanes, and an average of 60 inches of snow every year, sweeping and snow clearing are of significant concern.

For sweeping operations in protected bike lanes, the City originally tried blowers and roll brushes to push debris into the vehicle travel lane for sweeper pick up, but found that these were inefficient and resulted in too much dirt being kicked up. The City also tried using ATVs with hose attachments, ultimately deeming this insufficient as well. In response, the Streets Division procured a new addition to the fleet. Salt Lake City now has a Tennant ATLV 636a “stadium-style” sweeper. This vehicle can clear all the City’s protected bike lanes in 2 hours, with a weekly recurring sweeping schedule. Under current conditions, the City estimates their Tennant vehicle will be able to support up to 20 times more protected bike lane miles before a second unit is needed.

For keeping up with annual snow fall, Operations Manager H. Cabot Jennings noted that larger width bike lanes of 7-feet can be cleared by existing equipment, such as a plow-equipped Ford F550. This gives the City additional operational flexibility. For the majority of the City’s existing and planned protected lanes, smaller vehicles are necessary. Salt Lake City spent their first year using Jeep Wranglers from the Golf Department equipped with cut-down plow blades to fit into the lanes. After that, they purchased two Kubota RTVX1100 units with V-plows. These vehicle can clear all the City’s protected bike lanes within 2 hours of a storm event. Jennings notes that the Kubotas include heated cabs with windshield wipers, meaning the maintenance crew is happier using them. Salt Lake City provides annual vehicle training for operators. Keeping those doing the work safe and comfortable is key to ensuring a smooth deployment. 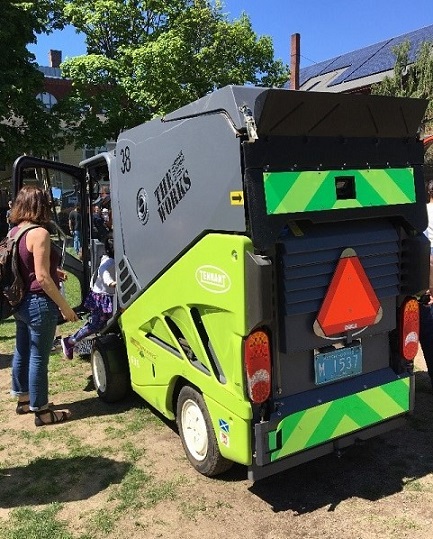 Cambridge, MA features many pedestrian squares. To maintain these areas, the city began utilizing downsized sweeping and plowing vehicles in the 2000s, well before the first protected bike lane was implemented. These Holder sweepers and plows grew to a fleet of seven to maintain 25 miles of sidewalk, including the full length of Massachusetts Ave, along with usage in the summer for watering trees and landscape areas. While the Holder equipment was initially adequate to meet Cambridge’s needs, over the years, the city has found that routine maintenance has made it challenging to keep all of them running at the same time.

In 2016, Cambridge acquired one additional 48-52” wide Mathieu street sweeper and one 45” wide Tennant unit to clear and maintain their protected bike lanes. The Mathieu sweepers are narrow enough to fit into the lanes, complete with articulating brooms that can be manipulated to squeeze into tighter spaces. Cambridge DPW uses the sweepers in recreational areas like basketball and tennis courts, as well as parking lots.

In addition to the Holder equipment, DPW also uses a Wacker Neuson articulated plower and salter, and since 2018, a Multihog plow with brine attachment to de-ice protected bike lanes. DPW first rented the Multihog in 2018 to test its reliability and ease of maintenance, and based on that experience, ordered one in 2019. The City cites the “try before you buy” strategy as a good way to make sure the vehicles meet particular needs, including maneuverability, traction, capacity, reliability, and garner the support of public works crew
members.

Like Salt Lake City and Boston, Cambridge has to deal with severe snow often on short notice. With a fleet of nine compact snow plows, the city can deploy vehicles with the same speed as the traditional plows. Equipped with dump bodies and salt spreaders in the back, they’re able to treat the sidewalks and bike lanes as they push or in some cases blow the snow. All of the compact units include blowers to be able to blow snow into an adjacent dump truck or into park areas for higher volume snows.

As for all new vehicles, Cambridge needed to calibrate expectations for maintenance, sourcing parts and accessories, and training operators. Nardone noted that larger drivers are more comfortable on long shifts in units with roomier cabs, such as on the larger Holders and Multihogs, compared with the smaller Holders or Wacker. 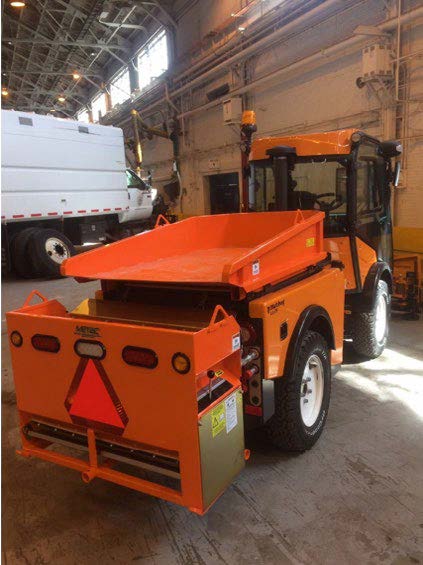 Chicago’s rollout of a large, citywide protected bike lane network has also been enabled by investment in compact maintenance equipment. The Chicago Department of Transportation initially used old tracked SW48 Bombardiers from 1997 and 2001 to clear snow from bike lanes; however, these vehicles could not adequately clear snow on all the sidewalks and bridges in the city. In 2018, Chicago procured two Multihogs specifically for bike lane winter maintenance. These vehicles include a number of attachments such as drop spreaders for sand and salt, plows, rotary sweepers for bike lanes, and a power washer for cleaning green alleys, which will promote their usage for maintenance year-round. Ordering these with enough lead time is important, as Chicago discovered when customs delays kept the units from arriving until spring 2019, too late to place them into service for the winter season.

David Pertuz, Senior Automotive Equipment Analyst at the Chicago Department of Fleet and Facility Management, notes that Chicago’s fleet purchasing contracts are written such that other local agencies can join the procurement. This can be very beneficial for smaller cities in Illinois, allowing them to order off the City’s vehicle contracts thereby avoiding the burden of specification development and from scratch procurement.