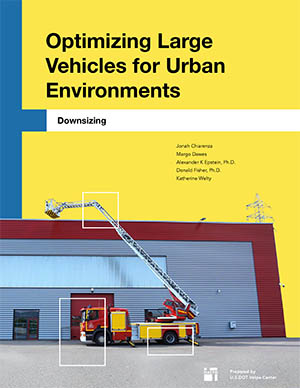 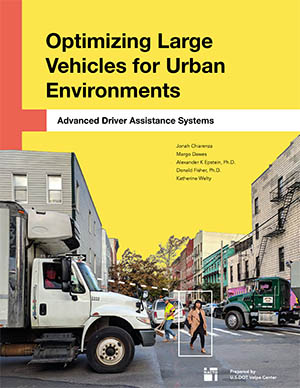 Vehicle designs currently on market but not in widespread use can improve driver visibility and street maneuverability, saving lives through fewer and less severe crashes

Large vehicles move goods and services that support thriving, livable communities and urban centers. However, these vehicles are disproportionately responsible for fatalities on U.S. roads. Nationally, large trucks comprise 4% of the U.S. vehicle fleet, yet are involved in 7% of pedestrian fatalities, 11% of bicyclist fatalities, and 12% of car and light-truck occupant fatalities.

When it comes to traffic fatalities, vehicle size matters. Large trucks typically have blind spots that are larger than those of the average car, making it harder for truck drivers to see people or objects directly next to or in front of them.

Compounding the higher lethality risk inherent in large trucks, geometric street design choices are commonly constrained by the size and maneuverability of the largest vehicles on the road. Although street redesign is widely recognized as a highly effective way to reduce traffic fatalities and injuries, the space needs of large vehicles often deter cities from implementing key safety treatments such as shorter crossing distances, reduced roadway widths and turn radii, pedestrian refuges at intersections, and physically protected lanes for pedestrians and bicyclists.

To address these safety challenges in the near-term, municipal and private fleet operators and policy makers can potentially reduce the number of fatalities involving large trucks by redesigning the vehicles themselves in ways that are more compatible with safe, vibrant city streets. Vehicle redesign is a near-term strategy that supports improved street design that can save lives.