While traffic safety continues to deteriorate across the US, California took action with three recently-passed laws that will begin to tackle unsafe speeds, make transit faster and more reliable, and provide safer places for people with open and slow streets.

In a major win for safety and NACTO’s efforts to reduce local speed limits, AB 43 grants cities new authority to lower speed limits on a wide variety of streets. Though speed plays a major role in crash likelihood and severity, California’s state vehicle code required that cities adhere to an outdated, dangerous methodology for setting speed limits, where the fastest drivers were essentially given the authority to set their own speed limits.

AB 43 gives California cities greater flexibility to lower speed limits on a wide variety of streets, and prevents the dangerous speed creep–speeds and speed limits rising over time–that led Los Angeles to raise speed limits on 102 miles of streets in 2018. This new Safe Systems approach for speed limit setting in California aligns with the proven best practices in City Limits, NACTO’s city-produced guidelines for setting speed limits on urban streets with safety as the top priority. 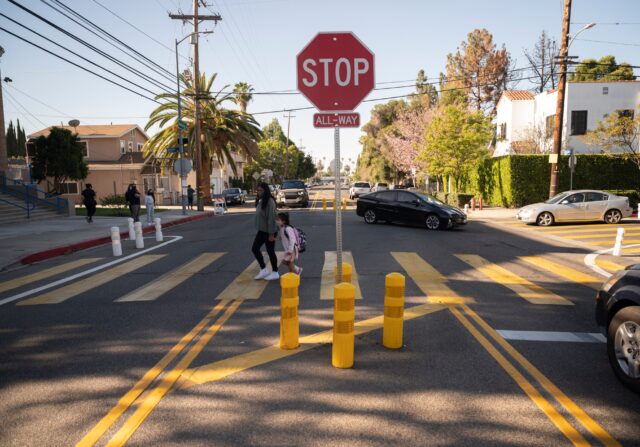 An adult and child cross the street in front of a school. Credit: LA DOT

As leaders in the years-long fight for a safer speed limit setting approach, NACTO and our California members were invited to participate on the Zero Traffic Fatalities Task Force, which created the framework for re-envisioning how speed limits are set in California.

We want to thank and congratulate Assemblymember Friedman, along with our member cities and partners, including LADOT, SFMTA, the City of Sacramento, San José DOT, UC Berkeley, and the Vision Zero Network. AB 43, which passed California’s state senate by an overwhelming 30-to-5 margin, sets the state up to become a national leader on street safety, and brings California in line with states like Washington and Massachusetts, which have similarly passed forward-thinking speed limit legislation.

Laws for Better Transit and for Safe Public Space

AB 43 was just one of several wins this legislative session for California cities, streets, and safety: AB 917 authorizes automated enforcement for transit lanes, and AB 773 gives cities the option to make open & slow streets permanent. Both bills strengthen cities’ toolkits for transforming streets into safe, reliable, and sustainable public spaces for people walking, biking, and taking transit. Furthermore, AB 917 will enable California to explore and expand the use of automated enforcement as a way to improve transportation safety and reliability without relying on often inequitable and inconsistent police enforcement.

The session was not without its disappointments. Governor Newsom vetoed AB 122 and AB 1238, two equity and safety-focused bills that had overwhelming support in the legislature. With the passage of AB 122, California would have become the tenth state to enable people on bikes to treat stop signs as yield signs under controlled conditions. Meanwhile, passing AB 1238 would have decriminalized jaywalking, an antiquated, car-centric tool that blames pedestrians for insufficient road design. Inequitable traffic enforcement, especially targeted at Black bicyclists and pedestrians is a reality across the U.S. Vetoing these bills does not help safety; rather, it makes biking and walking that much more inconvenient and opens up the opportunity for unnecessary police enforcement, disproportionately decreasing safety for Black and brown people on our streets. Given the overwhelming legislative support for both AB 122 and AB 1238, we strongly encourage the legislature to revisit these bills in the 2022 session.

For cities, states, and advocates seeking legislative solutions to traffic safety challenges, all these bills from California–including those that were vetoed–are models for progress. NACTO will continue to support efforts across the country to enhance transportation safety and equity outcomes. With these bills, California’s cities gained more control of their own streets, and we now collectively have the mandate to use that to improve safety, equity, and mobility for all.

An adult and child use scooters on an open street. Credit: SANDAG