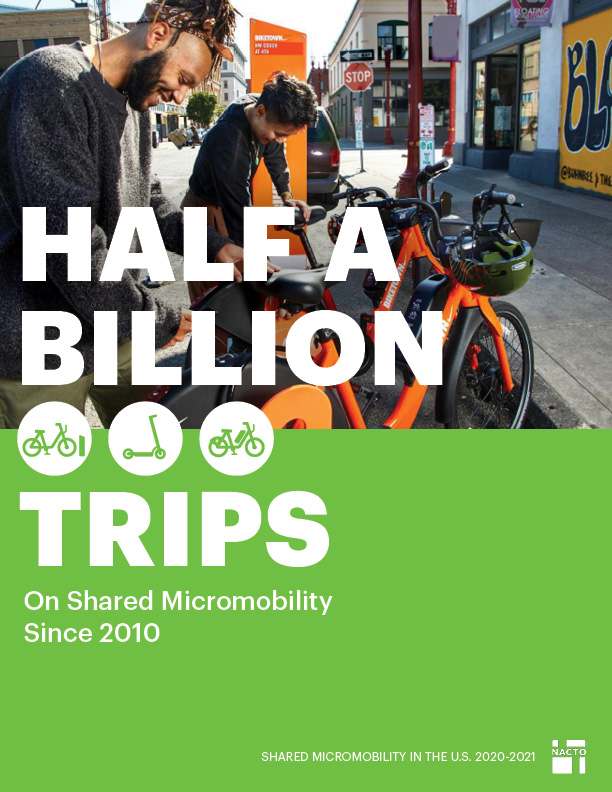 Half a billion trips on shared micromobility systems since 2010.

Since the first modern North American bike share system launched in Montreal in 2009, shared micromobility has ushered in a transportation revolution, providing safer, cheaper, and more accessible ways for people to get around.

Though it first began as a transportation option in a few cities, shared micromobility quickly exploded in popularity. Today, shared micromobility programs operate in dozens of regions across North America under established, well-regulated models that benefit operators, cities, and riders alike.

Building on previous reports, NACTO’s 2020-2021 Shared Micromobility in the U.S. report encapsulates the significant changes that have occurred since 2020, and the trends that emerged within shared micromobility programs that are likely to continue into 2022 and beyond.

Read the full report (pdf) or check out some highlights below. 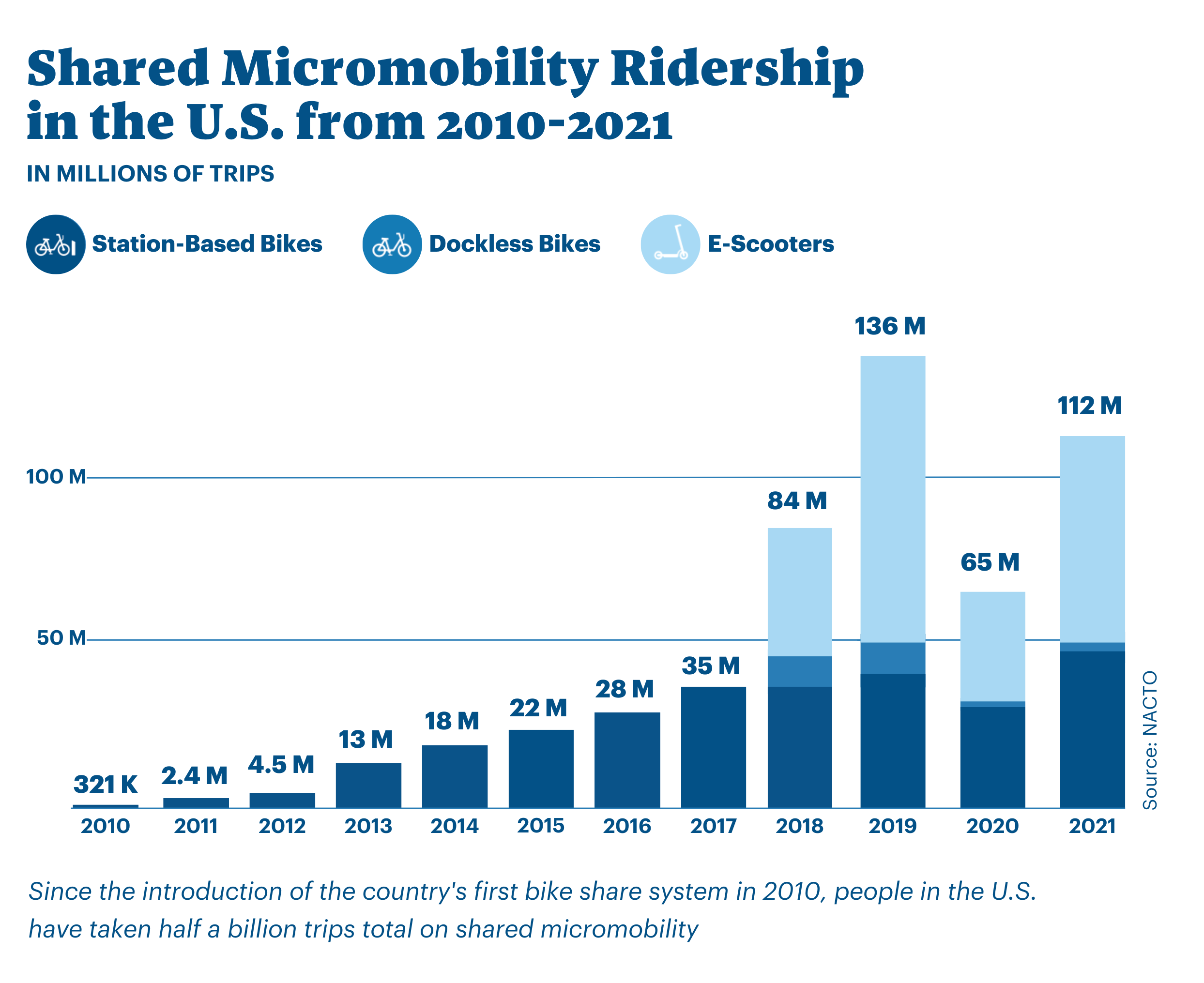 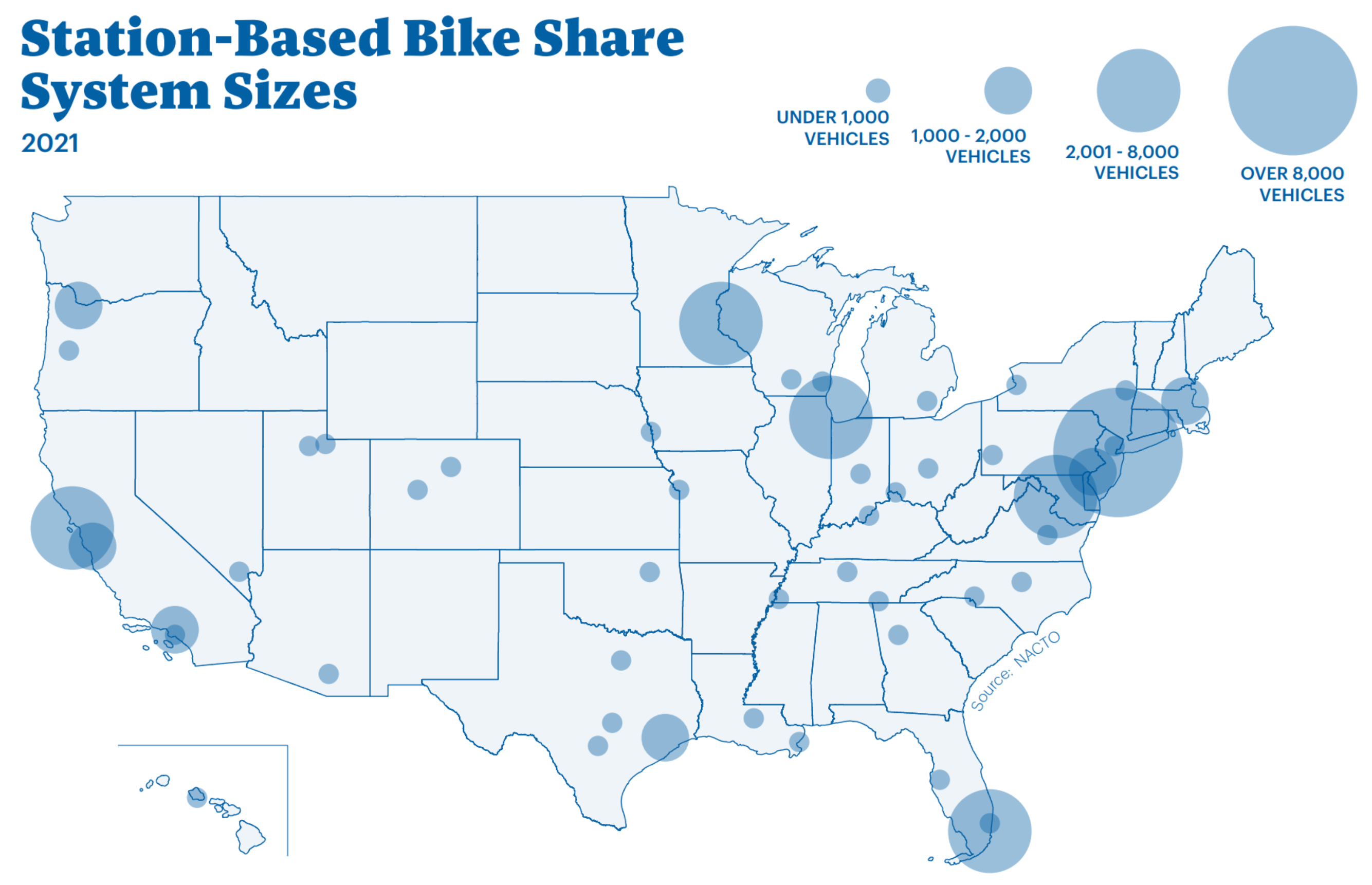 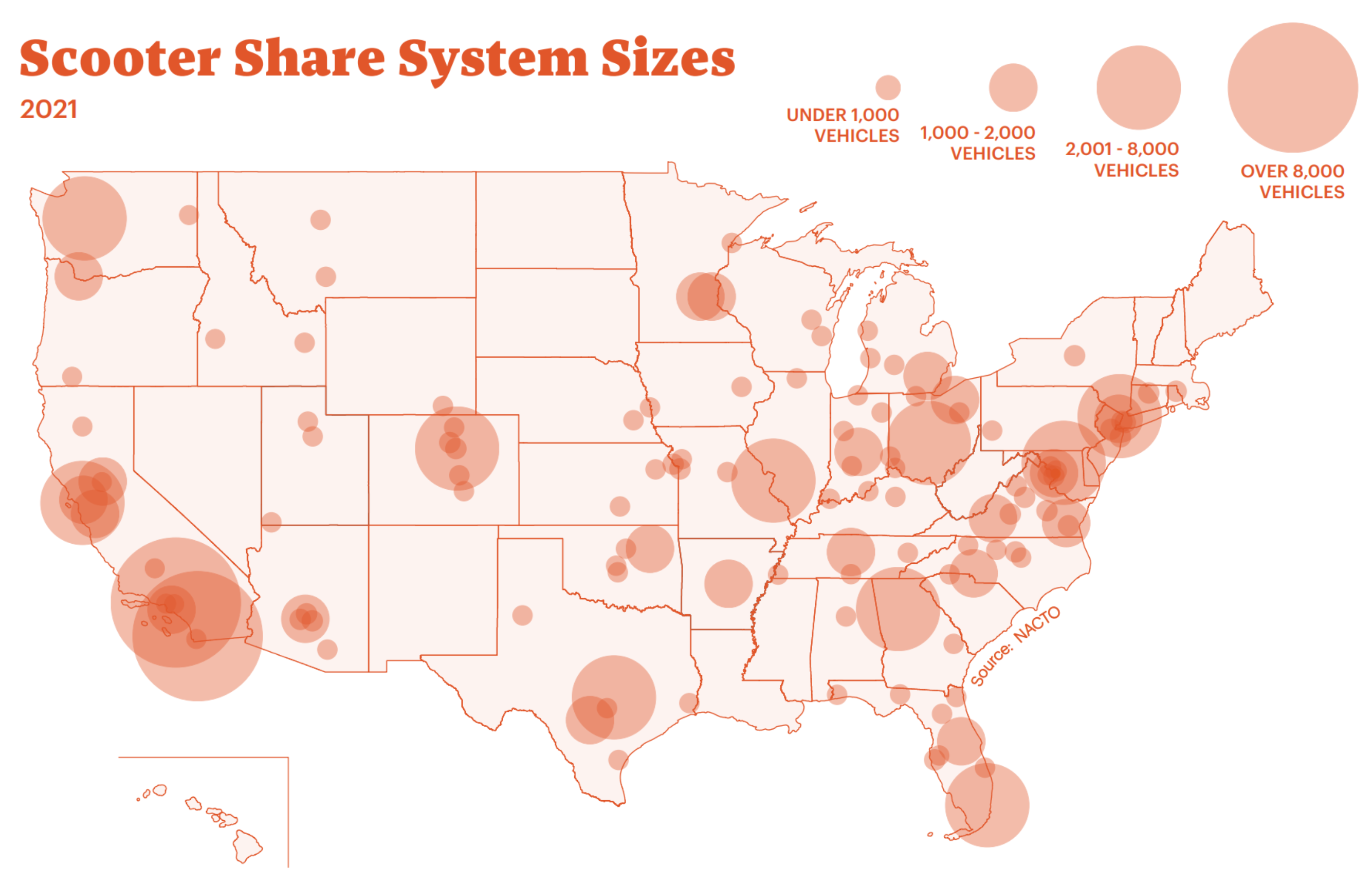 Beginning in March 2020, when trips on all modes of transportation dropped by nearly 70% nationwide and typical commuting patterns disappeared, people found new ways to get to work, to school, and to other daily activities, using bikes, e-scooters, and mopeds. Bike sales skyrocketed in 2020 and 2021; across the two years, people in the U.S. spent $15 billion on personal bicycles and bike accessories. A major driver of this bicycle boom? Shared micromobility, and more specifically, shared electric bikes.

Trip patterns—when, where, and why people ride—changed dramatically from before the pandemic. Where bike share systems previously saw pronounced ridership spikes during traditional rush hours, data from 2020 and 2021 showed a shift away from the AM rush hour and towards increased trips throughout the day. Several factors may be at play, including changes in travel patterns, an increase in hybrid work and work-from-home policies, increased use of shared micromobility services (especially by essential workers at off-peak hours), and a general shift toward a wider range of trip purposes.

The share of casual trips—trips taken by people who purchase a single ride or day pass instead of a membership—increased significantly over the past two years. Previously, most rides among the top five most heavily-ridden bike share systems were taken by monthly or yearly members. Throughout 2020, as many people’s work and travel schedules were disrupted by the pandemic, trip patterns shifted: people holding monthly and annual passes took 16% fewer rides than before the pandemic, while the number of pay-as-you-go and day-pass rides increased by 54%. 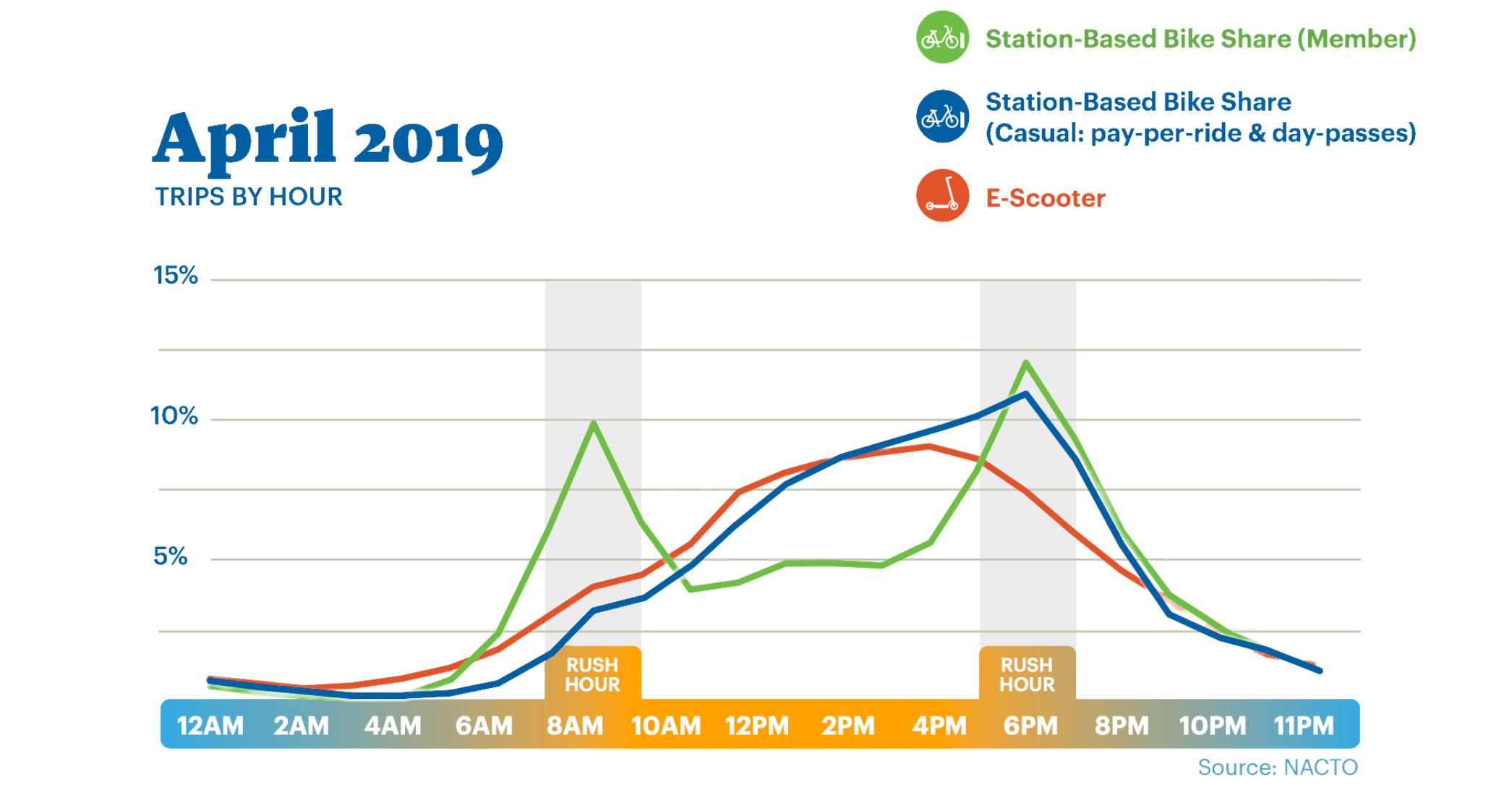 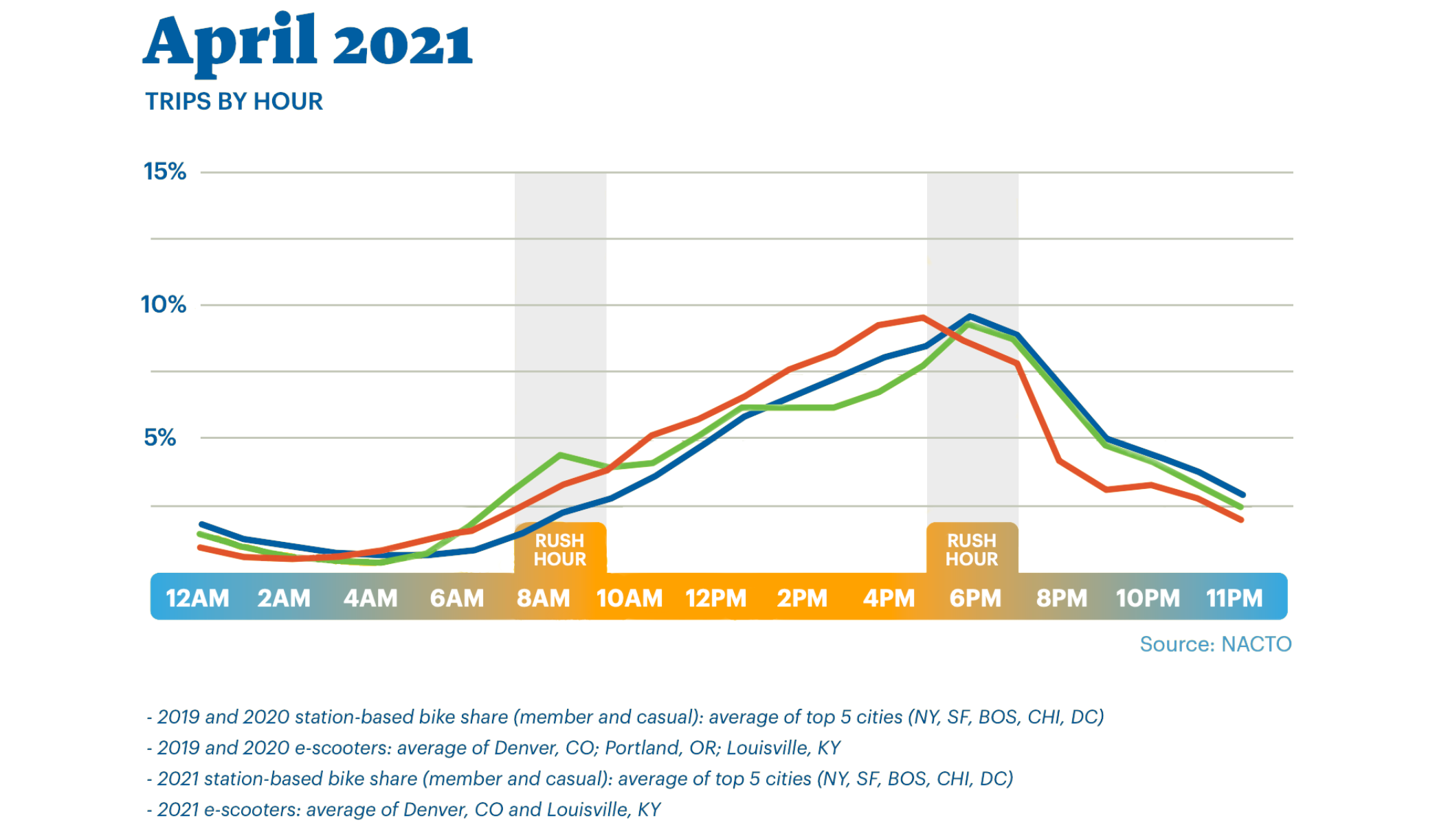 Despite a brief increase in longer trips during the early pandemic, the average trip length in 2020 and 2021 was comparable to 2018 and 2019. On average, the typical scooter user or bike share member rode for 11-15 minutes and 1-1.5 miles, while casual station-based bike share users took longer trips: 24-28 minutes and 2.4-2.7 miles.

Nevertheless, trip prices have increased substantially since 2018, especially in systems where prices are not regulated by the city. Trip costs for e-scooters and e-bikes have more than doubled since 2018, from an average of $3.50 in 2018 to around $7 for a similar trip in 2021. 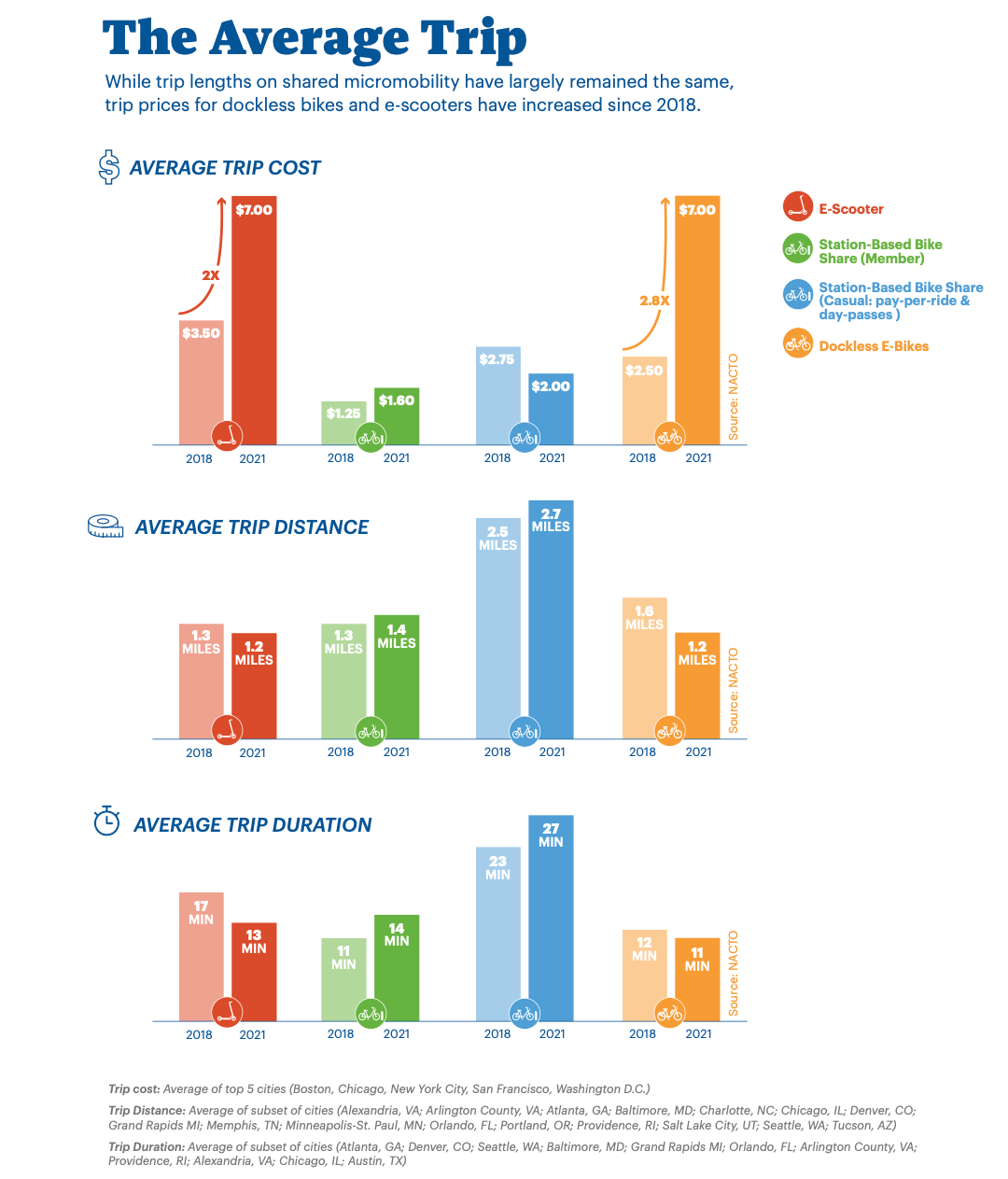 Per-minute pricing complicates trip costs across system and device types, as trip times are impacted by a variety of factors: travel speed, the number of stops made during a trip, the density of a city’s docking stations, and the time it takes to start and end a ride. For a casual ride on a station-based e-bike, a single 1.5-mile trip can cost anywhere from $2.50 to $5.25. Using a shared e-scooter for the same distance could cost between $5 and $9.

Rides per vehicle per day (r/v/d) is a measure of how much a system is used. A system with very few rides per device may not be profitable enough to be viable. Conversely, riders in a system with too many trips per device might find it difficult to find a vehicle, or find that vehicles are not present in lower-demand areas.

Trends in utilization among station-based bike share systems largely remained the same from 2019. Very large station-based bike share systems with over 10,000 devices—like New York City’s Citi Bike, which consistently averages around 5 r/v/d—generally saw more daily use than smaller systems. But some systems in warmer weather or recreation-heavy cities were exceptions to the rule, like Honolulu’s Biki system, which saw an average of 3.3 r/v/d in 2021 with a fleet size of only around 900 bikes.

For e-scooter systems, fleet size has become less relevant in determining daily ridership, especially as many cities have started to cap e-scooter fleets as part of broader regulatory changes. Denver—another city where outdoor recreation is popular—emerged as a notable standout for e-scooter rides per day, averaging 4 to 5 r/v/d between 2020 and 2021 and surpassing cities like Atlanta and Chicago, which have much larger e-scooter fleets.

The COVID-19 pandemic upended almost all established mobility patterns. Public transit ridership plummeted across the nation as millions sheltered in place, leaving U.S. transit agencies in funding jeopardy. In the U.S., total trips across all modes fell by 70% in 2020, with people taking 81% fewer transit trips and 40% fewer trips by car.

But people kept riding bikes. Station-based bike share systems registered only 24% fewer trips in 2020, and in numerous cities, systems broke monthly ridership records in the latter half of the year. Personal bike ridership increased overall in 2020, with cities like Houston reporting as much as a 138% increase in bike traffic. While most office workers remained at home during the height of the pandemic lockdowns, healthcare, service, and other essential workers continued to travel throughout the day, driving the continued use of shared bikes and e-scooters. 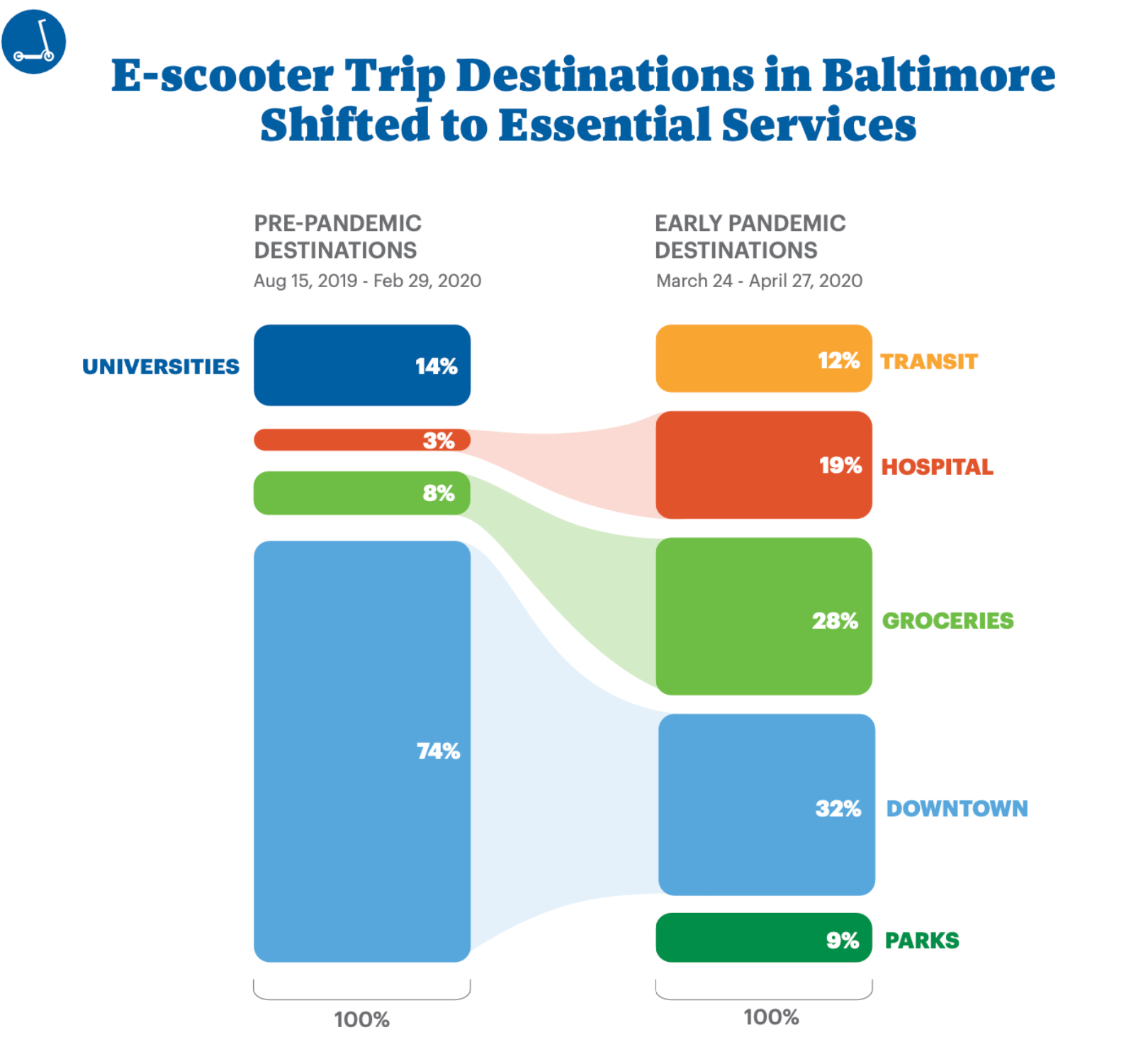 Shared Micromobility as an Essential Service

As public transit agencies across the U.S. faced operator shortages and service reductions during the pandemic, shared micromobility stepped up to provide other options for essential workers to get around.

Mobility in the Summer of Protest

It is no surprise that bikes—including shared micromobility bikes— played a role in the Black Lives Matter protests of the summer of 2020. Black and Latine/x cyclists face unique challenges: they are more likely to be targeted and ticketed, and safe biking infrastructure is disproportionately absent from many communities of color.

Transportation itself became an issue at the height of the protests. In some places, city governments, looking to enforce curfews and reduce the size of protest, ordered partial shutdowns of transit and shared micromobility systems. In others, cities and dockless operators— citing fear of vandalism or misuse—remotely disabled and removed equipment from streets, shutting down or limiting service.

In 2020, many systems saw increases trip length during the early months of nationwide office and school closures, especially among casual riders. When the traditional 9-to-5 commute was essentially eliminated in spring 2020, shared micromobility remained a tool for socializing, exercise, and seeing the city. In Atlanta, the average e-scooter trip distance doubled to 2 miles after the program reopened in July 2020. Philadelphia also saw Indego trip durations increase between 7 and 12.5 minutes across the city, and across socioeconomic and demographic groups.

Trips on shared micromobility began to rebound by mid-2021 in most cities, with many station-based systems—such as Citi Bike in New York City, Divvy Bikes in Chicago, and Indego in Philadelphia—breaking ridership records. This rapid rebound can likely be attributed to thoughtful system expansions and an influx of workers returning to physical offices.

2021 also underscored how valuable shared micromobility systems can be as sustainable transportation options (even in the midst of a including a large number pandemic), especially when they are designed as public-private partnership between operators and governments.

Overall, the most popular systems share a number of similarities, including a large number of bikes, densely-placed stations or designated pick-up/drop-off areas, and robust rebalancing operations. These planning and operations efforts require strong partnership between operators and local governments.

Cities continued to move forward with service expansion into 2021, targeting previously underserved communities and strengthening their equity requirements for operators. Chicago, Los Angeles, Philadelphia, Washington D.C, Portland, OR, and New York City, as well as a number of other cities, expanded their bike share systems between 2020 and 2021. In Boston, as of 2021, over 80% of households are now within a 10 minute walk of Bluebikes stations.

Accompanying these expansions were strategies for ensuring greater access to shared micromobility. In Chicago, the City’s Office of Equity and Racial Justice implemented citywide equity targets, which led the Chicago Department of Transportation to develop an e-scooter permit program against the backdrop of a broader city vision for equitable transportation. The program ranks permit applicants on a variety of criteria, such as equitable hiring, training, and outreach plans, and the ability for operators to provide access for people with disabilities and those facing additional economic, health, or social barriers.

Facing the Realities of a Changing Climate

In 2021, shared micromobility stepped in as a resilient solution, supporting transit systems inundated by extreme weather. For example, in September 2021, the day after Hurricane Ida flooded New York City and forced large portions of the subway system to shut down, the bike share system set a new ridership record, with over 125,000 trips in a single day.

Shared micromobility itself is not immune to climate disasters. Throughout 2021, a concerningly large number of extreme weather events disrupted shared micromobility services in a number of cities across North America. In a survey of NACTO member cities, around a third reported their station-based or dockless service had to be temporarily suspended due to an extreme weather event such as a heatwave, hurricane, or wildfire. These experiences illustrate how essential it is for cities and operators to plan for changed operations and unexpected service disruptions as part of their broader climate resilience strategies.

Even in the midst of operational challenges, cities continued to refine operating requirements for dockless systems in order to encourage better business practices and increase access for their residents. More cities issued requests-for-proposals (RFPs) and selective permits, with some cities establishing fully new regulatory mechanisms to combine bikes and e-scooters into single contracting agreements.

Strong city-operator partnerships with smart regulatory frameworks established systems that were resilient and could support a variety of trip needs, even with record ridership during an ongoing pandemic. Other regulatory trends in 2021 included requiring slow speed zones and slow first rides, designated parking corrals, and lock-to requirements, as well as broader equity policies. 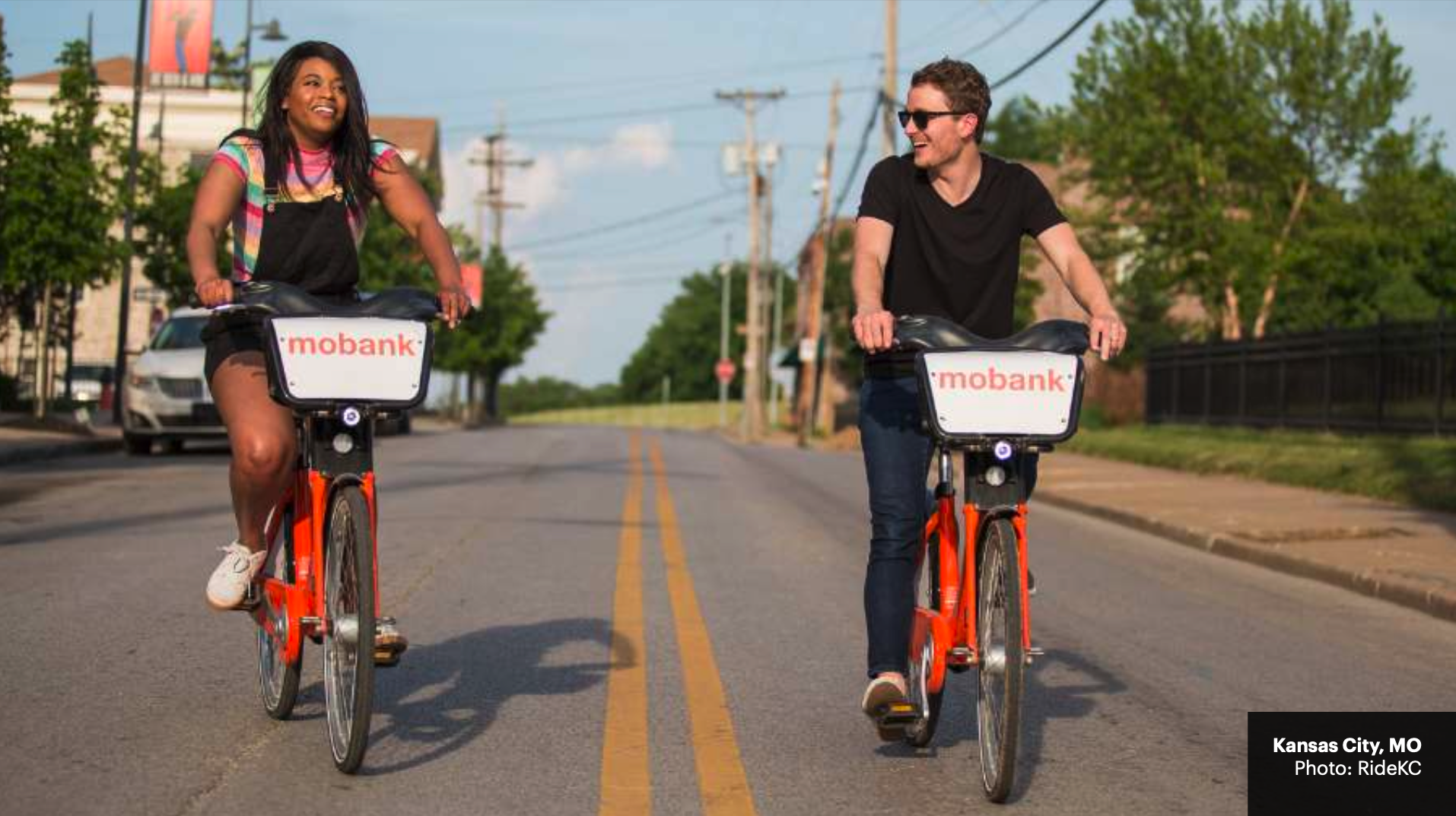