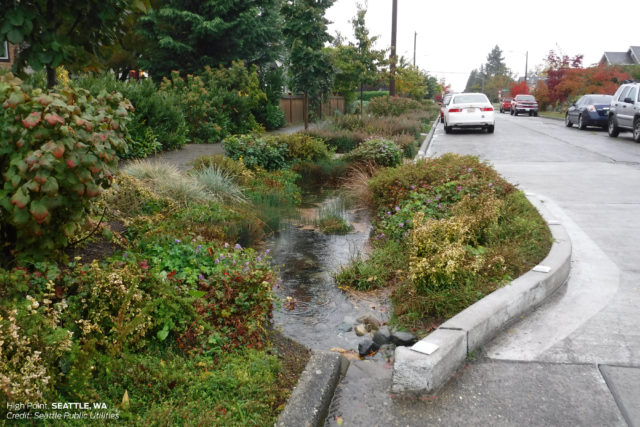 Cities are defined by water. Waterways define city edges and boundaries, shape growth and development, and provide essential resources for human populations and the built environment. However, development patterns have too often removed water from urban places, channeling stormwater out of the human environment and therefore restricting natural functions and ecosystem services at great economic expense.

In the past, stormwater has been treated as waste, and stormwater management has meant dispensing of runoff as quickly as possible after a rainfall. This approach has required expensive “gray” water infrastructure: concrete and metal pipes, gutters, tanks, and treatment plants to convey, detain, and treat stormwater before discharging it into local water bodies. In many cities, intense storms overwhelm the gray infrastructure system, resulting in an outfall of polluted water into nearby streams and rivers, and potentially causing impassable streets and flooded homes and businesses. In cities across the country, gray infrastructure systems are under-maintained and reaching the end of their useful lives. Replacing this aging infrastructure can be a prohibitively expensive proposition.

Such a singular approach to stormwater management is no longer possible or desirable. In an age of climate change, urbanization, and increasingly frequent, intense storms and prolonged, devastating droughts, cities are now treating stormwater as a resource to be valued, not waste to be managed.

The High Cost of Conventional Infrastructure

In 2010, New York City estimated that updating the city’s stormwater system to control combined sewer overflows using only gray infrastructure would cost the city $6.8 billion of capital investment over twenty years. By blending gray and green strategies, the city reduced its estimated cost by $1.5 billion.

Storms of all magnitudes can cause flooding to homes and businesses, disrupting lives and damaging property. A study of Cook County, IL found that urban flooding is chronic and systemic; property owners suffered an average of $6,000 in damages per flooding event, and 87% of homeowners surveyed had experienced multiple flooding events. In addition to damaging buildings, flooding can disrupt street operations and prevent safe transportation.

In 2016, four flooding events and eight severe storms have each incurred damages exceeding $1 billion across the United States.

Climate change is causing temperature increases and sea level rise, which combine to create increasingly frequent and dramatic storm surges that threaten low-lying parts of the city. In many coastal cities, “once in a century” storm surges may occur once a decade in the future.