This walking tour will travel along Geary Street between Powell and Polk streets (approximately ½ mile walk beginning at Union Square at the corner of Geary and Powell and ending at Geary and Polk, with option to return via foot or by bus).
Following New York City’s lead, San Francisco is the 2nd U.S. city to experiment with red transit-only lanes. The SFMTA’s first red transit-only lane was installed along three blocks of Church Street in March 2013 to improve reliability and travel times for buses and light rail vehicles. In 2014, the SFMTA has expanded this treatment to several high-ridership bus corridors, including a portion of the Geary corridor, which is the most heavily used surface transit corridor in the City with over 50,000 daily transit trips. The SFMTA is evaluating the effectiveness of red transit-only lanes and will be sharing findings with the Federal Highway Administration and California Traffic Control Devices Committee for potential adoption as a new traffic control device. 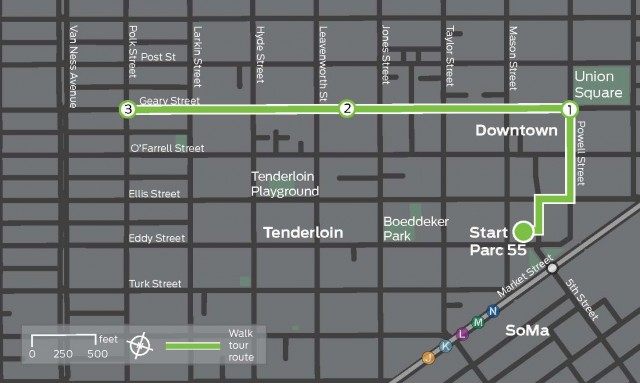