Begin the tour at the San Francisco Ferry Building. After brief overview of the role this transit hub/regional destination plays in the Bay Area, the group will walk south along the Embarcadero, site of San Francisco’s Freeway Revolt and subsequent elevated freeway demolition, to the T Third light-rail stop at Folsom Street.

The tour will ride through South Beach and past the AT&T (Giants) Ballpark, which opened in 2000 and enjoys regular sell-out crowds with one of the highest transit mode splits of any American ballpark. We will also pass Caltrain, the primary commuter rail line between San Francisco and Silicon Valley, as well as Piers 30-32, the site of several redevelopment proposals, including a new Arena for the Golden State Warriors.

The tour will get off the T Third for a stop in southern Mission Bay, a massive former railyard redeveloped to house the emerging campus of UCSF, biotech research centers, thousands of housing units and several signature parks and community facilitates. Just north of this area is a large parking lot proposed to be redeveloped by the San Francisco Giants for the “Mission Rock” mixed-use, open space and recreation (schematic plans provided). Across Third Street from UCSF is the proposed new home for the Golden State Warriors: we’ll walk one block north to survey this site (schematic plans provided).

We then walk south into Dogpatch, a former industrial area adjacent to a small, vibrant Victorian neighborhood. Dogpatch is finding new-found favor with tech workers and home to some of the City’s most popular bars and restaurants. Crossing Third Street from Dogpatch, we’ll spend fifteen minutes walking into Pier 70, a collection of historic shipyard and steel buildings proposed for rehabilitation and redevelopment by Forest City as a pedestrian-scaled, transit-oriented mixed-use community (schematic plans provided). 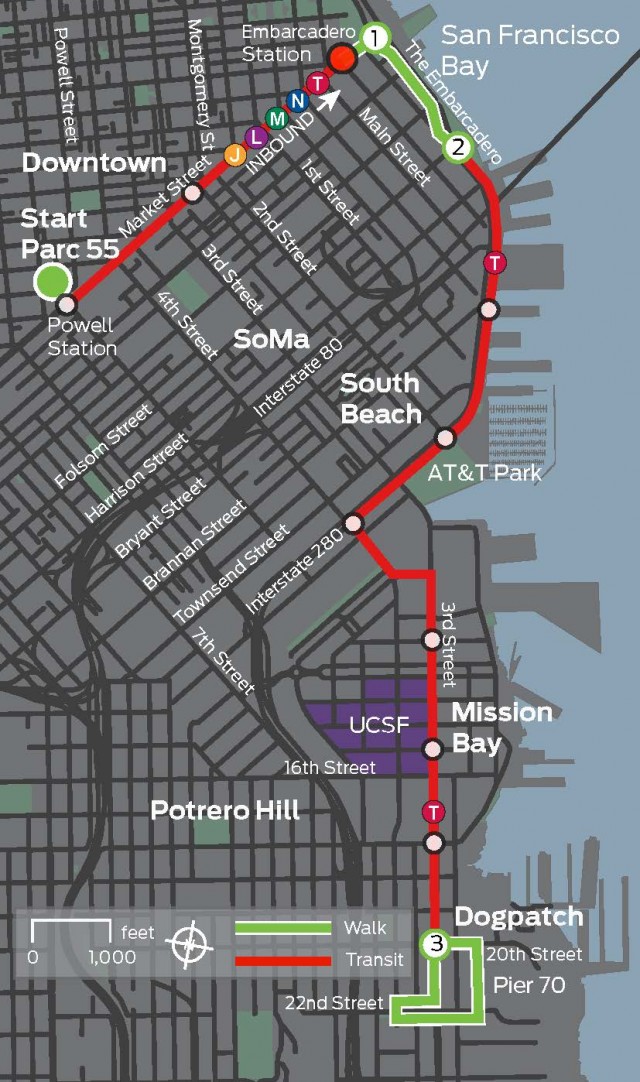