In 2016, the City of Cambridge lowered speed limits to 25 mph citywide and began implementing 20 mph safety zones in 2018. Cambridge—along with other cities and towns in Massachusetts—have the right to set speed limits for “thickly settled” areas under the state’s 2016 Municipal Modernization Act. 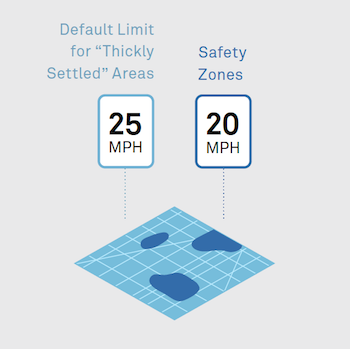 Prior to this reform, the default speed limit in thickly settled areas was 30 mph and required a speed study to change a speed limit. But when a new Governor was elected in 2015, his office asked all municipalities how the legislature could update state regulations to make cities more effective. Among the asks was a request for greater local authority in setting speed limits.

The law allows any city or town to adopt citywide default limits of 25 mph for areas that meet the definition of thickly settled (homes or businesses spaced 200’ or less apart) and safety zone limits of 20 mph with local government approval. The definition of safety zone is broad, taking into account the presence of vulnerable users, schools, parks, and senior centers, among other factors. Implementation of a Safety Zone on streets under municipal control does not require State authorization.