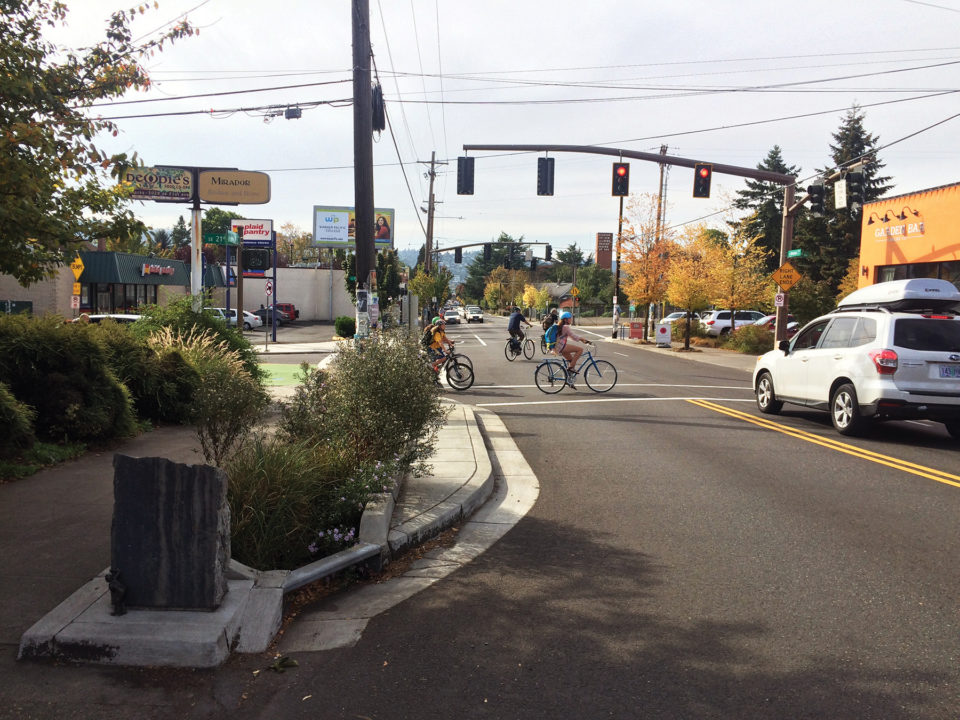 Stormwater management: Eliminate sewer backflows into basements and streets in the project area.

Mobility: Improve safety and comfort for people walking and biking along the corridor. Increase reliability and running speed of the heavily-used bus lines along the street. 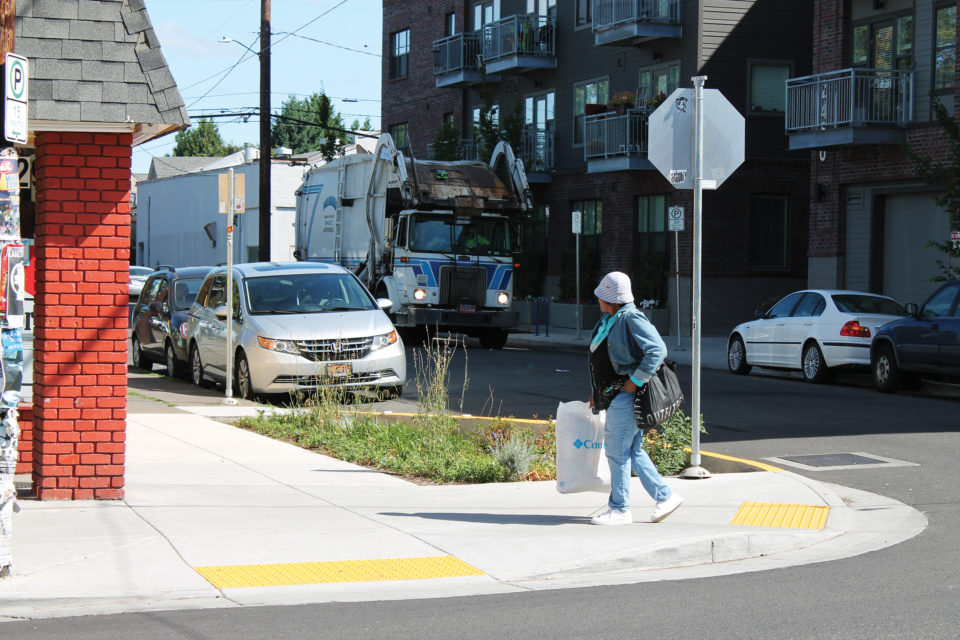 SE Division Street was a deficient transportation corridor with varying land use and many competing needs. Historically, the corridor has served as a through street, serving much of the traffic traveling through surrounding neighborhoods. Over time, however, the street became a destination in itself, with an increasing number of neighborhood retail shops, increasing the number of pedestrians and bicyclists along the corridor, and making parking for pedestrians and cars scarce. 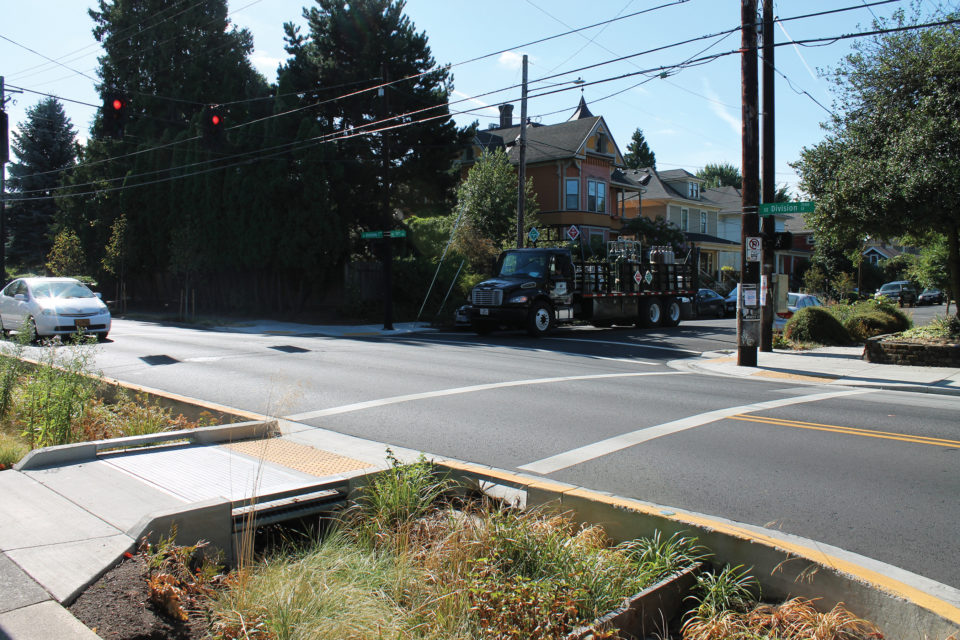 Through an in-depth multi-year design and outreach process, the City of Portland worked with a technical advisory group and a community advisory group on a plan for improving the corridor and accommodating growth over the next 20 years. The street was redesigned to include fewer but better-performing travel lanes, along with curb extensions, marked crossings, improved bus stops, on-street bike parking, bioretention planters to manage stormwater runoff, and large canopy trees along the corridor to provide shade and improve water quality.

The project eliminated peak-hour travel lanes along most of the corridor after finding that they were underutilized. By eliminating lanes, designers reclaimed space for other uses.

A curb-to-curb reconstruction of the corridor brought sidewalks up to standard width and added or redesigned corner ramps to make the street ADA compliant.

Large canopy trees were planted on the north side of Division Street throughout the corridor, avoiding utility conflicts on the south side. The trees help shade the street, intercept stormwater, and add attractive landscaping and traffic calming elements to the corridor.

In some parts of the corridor, designers integrated stormwater facilities into furnishing zones to minimize impervious area while avoiding utility conflicts.

The project added on-street bike parking (bike corrals) throughout the corridor. By eliminating peak-hour travel lanes, the project also added additional on-street car parking along most of the corridor. In addition to enhancing the vitality of the retail landscape, bike and car parking add a buffer between moving traffic and pedestrians on the sidewalk. 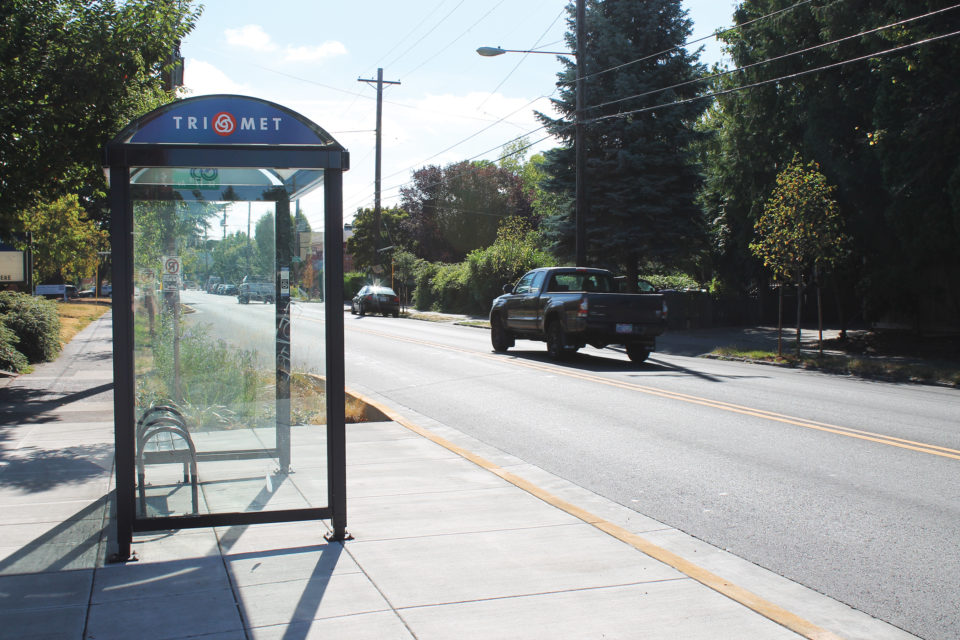 Involve the community from the start. Division Street’s successful redesign plan drew upon over ten years of community input, consultation, and leadership, starting from a 2003-2005 vision of the corridor as a neighborhood main street, to the eventual street reconstruction plan designed from 2009 to 2012.

Adapt design to local context. While peak-hour travel lanes were removed along the majority of the corridor, additional lane capacity was warranted at three key intersections. In these targeted areas, the project included signal timing changes, bike boxes, and removal of parking to reduce conflicts with transit.

Monitor impacts. Portland is monitoring traffic flow impacts resulting from changes to the corridor, particularly to ensure that car traffic was not inadvertently diverted to a nearby street with heavy bike ridership.

Maintain business access. Stormwater facilities were carefully sited as to not overly impact any one business’ street frontage. In many cases, facilities were ‘split’ between two storefronts, balancing demand for access to local retail.

Avoid unclear street uses. Site stormwater infrastructure so that it, or a curb extension, extends to the corner, avoiding inadvertently creating a ‘partial parking space’ that drivers may attempt to park their cars in.

Dense housing construction has boomed along the Division Street corridor, and an influx of retailers has made the street one of the most-popular in the city of Portland for shopping and dining.

While Division Street is one of the top 30 streets for crashes in Portland, the project area has relatively few crashes compared to the rest of the corridor.