The New York City Plaza Program is a capital program of the New York City Department of Transportation that converts underutilized roadway space into neighborhood amenities through partnerships with local non-profit organizations and communities. The program, launched in 2008, has accepted six rounds of applications and has realized 22 new public spaces for New Yorkers. 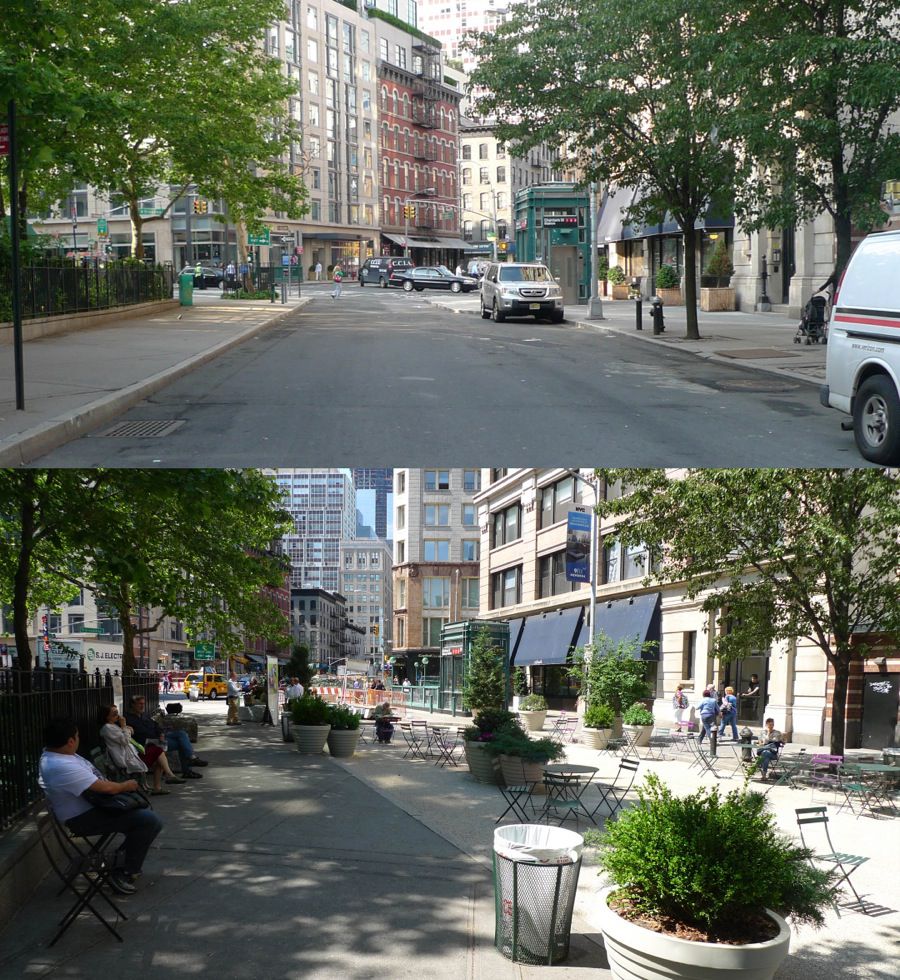 Bogardus Plaza, TriBeCa: before & after 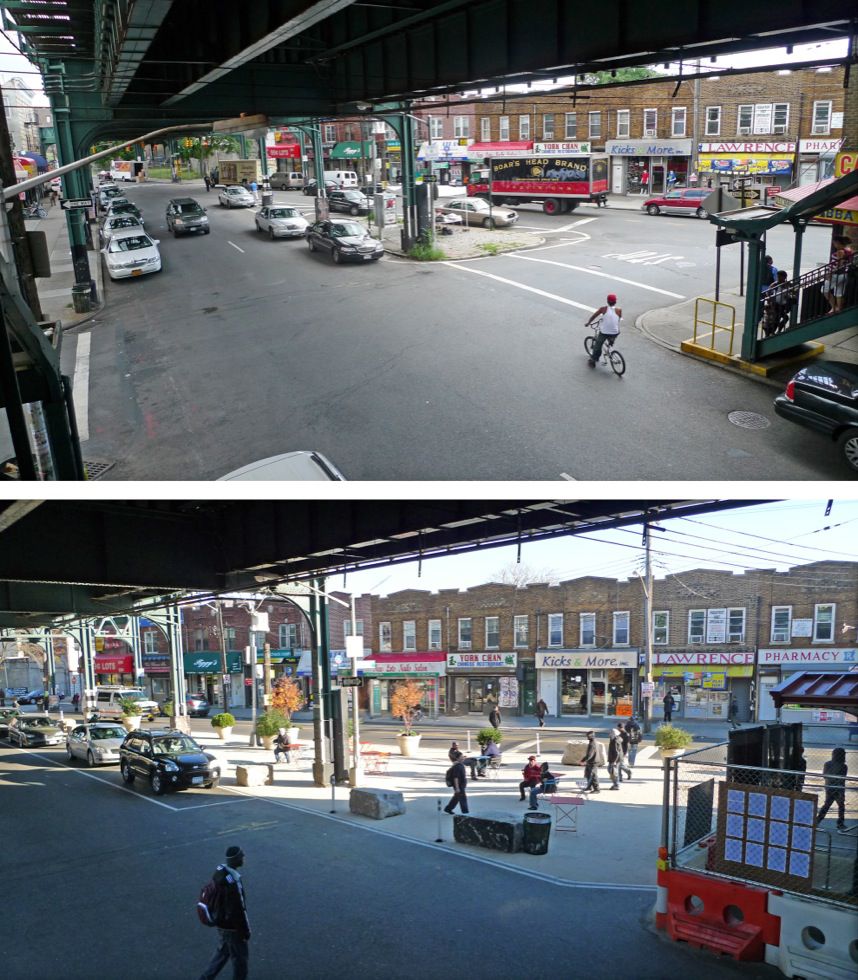 New Lots Avenue, Brooklyn: before & after 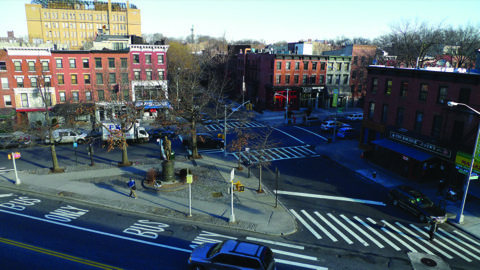 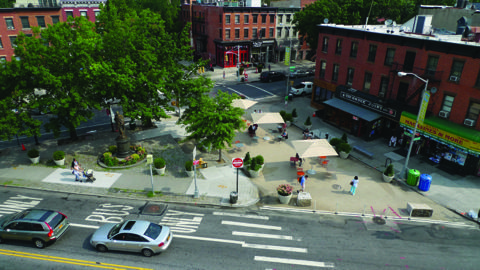 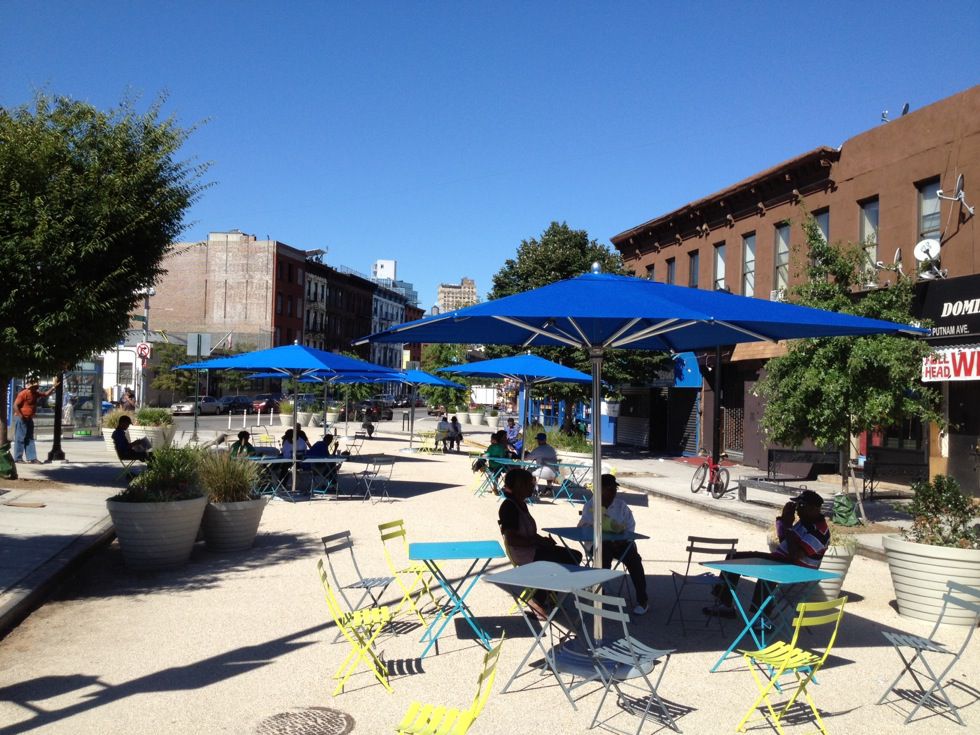 The Plaza Program is driven by a community-driven model, accepting proposals from not-for-profit organizations to create neighborhood plazas through an annual competitive application process. Priority is given to plazas in neighborhoods previously lacking open space, where there is strong community initiative, and where the plaza integrates well into the existing community context. NYC DOT has found that plazas are well-suited in areas with excessive street space that is underused, unnecessary, or confusing for motorists, located along active pedestrian corridors and transit hubs with nearby retail or other uses that complement activity at the plaza.

NYC DOT funds plaza design and construction, and incorporates community input through public visioning workshops to develop a design that is appropriate for the neighborhood. The not-for-profit partner is responsible for conducting community outreach, participating in design meetings, formulating a funding plan, providing insurance for the plaza, undertaking maintenance, and programming activities and events to ensure the plaza becomes a vibrant neighborhood destination.

The strength of the non-profit partner is the single most important contributing factor to a plaza’s success. Locally-known and respected neighborhood non-profits bring on-the-ground insight and expertise to shepherd the plaza project through the process, especially where initial opposition from adjacent landowners or residents calls the project into question. Local partners also help NYC DOT secure approval from the local community board, an essential milestone in realizing a plaza project.

The NYC DOT Plaza Program is a capital program, though many of its plazas are constructed in the short term using temporary materials. When the program first launched, NYC DOT determined whether to award funding for a temporary design or a capital reconstruction based on available resources and the competing applicant pool. However, the capital process proved lengthy, often requiring a year before the design phase, another year to finalize the design and receive public design commission approval, and additional time for the actual construction. Furthermore, capital construction requires NYC DOT to award contracts to the Department of Design and Construction, while plazas with temporary materials need limited interagency coordination since NYC DOT has all the necessary capacity and authority in-house.

As a result, NYC DOT is awarding more funding for projects that use temporary materials such as moveable tables, planters and umbrellas; round six was the first time applicants could specifically apply to create a plaza with temporary materials. Funding for these materials comes from a different, more flexible expense fund than for capital elements, which expedites expenditures. By prioritizing plazas with temporary materials, the agency has streamlined the approval and funding process, allowing community members to enjoy the benefits sooner. Opponents’ concerns are often assuaged by the flexibility of temporary materials, galvanizing supporters to pursue eventual permanent construction. Whether a capital reconstruction or temporary design, all plazas must meet ADA standards for accessibility.

Funding for the Plaza Program was secured through PlaNYC 2030, New York City’s long-range plan released in 2007. PlaNYC set a goal to ensure all New Yorkers live within a ten-minute walk of a park, and the Plaza Program helps fulfill that goal. The Plaza Program is situated within the NYC DOT Public Spaces unit and is led by a four-person team.

Unique obstacles pose challenges to each specific plaza project. Opposition to parking space removal is common, as are concerns about plaza maintenance. In the face of these challenges, NYC DOT has discovered a number of common elements crucial to success.

A dedicated, long-term funding source through PlaNYC has given the program necessary resources and the time to evolve, perfecting its process.

The recent focus on temporary materials allows plazas a degree of flexibility—assuaging opponents, streamlining the design and construction process, using funding more efficiently, and building more plazas across the city. Once temporary plazas are in place, local support for permanent construction tends to grow.

DOT’s reliance on neighborhood non-profit groups as plaza project partners is a hallmark of the program. By directing plaza resources to areas with strong local support through a competitive application process, DOT has ensured that the plaza projects have community buy-in and will be sustainable in the long-term. The non-profit partner is indispensable in maintaining the public space as a clean, well-programmed community asset.

Through this program, in 2012, the city transformed a redundant service road off of Roosevelt Avenue into a vibrant pedestrian space called Corona Plaza. By first constructing an interim plaza with temporary materials, NYC DOT improved the public space in the short-term while undertaking the longer process of permanent reconstruction, slated for 2015. The strong support from the local partner, Queens Economic Development Corporation, as well as the community and elected officials, led to this plaza’s successful implementation. 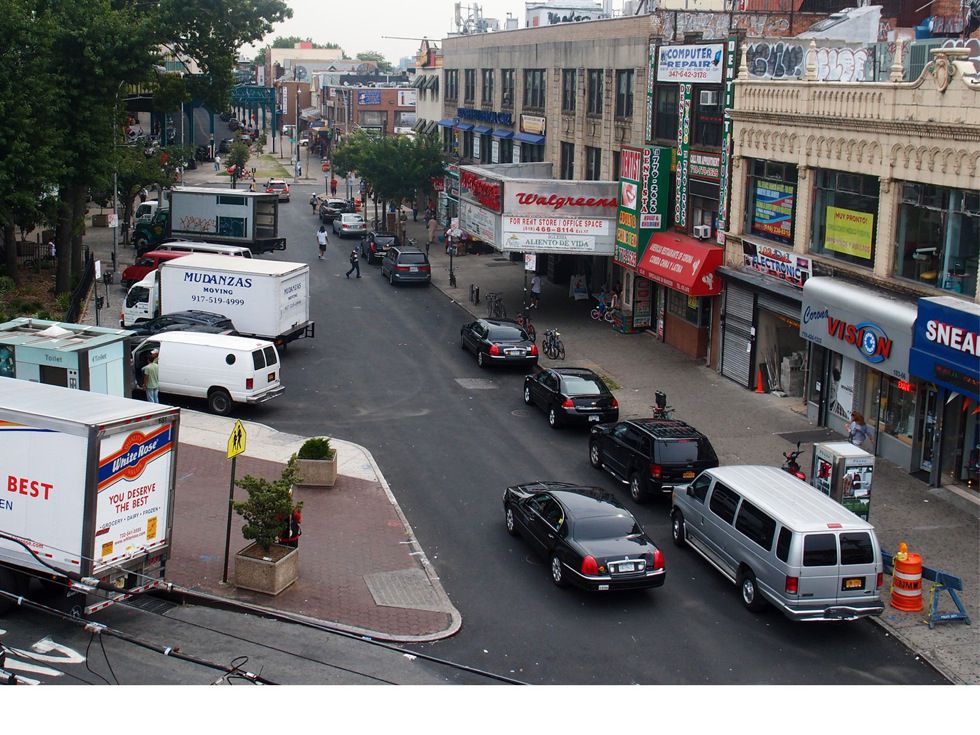 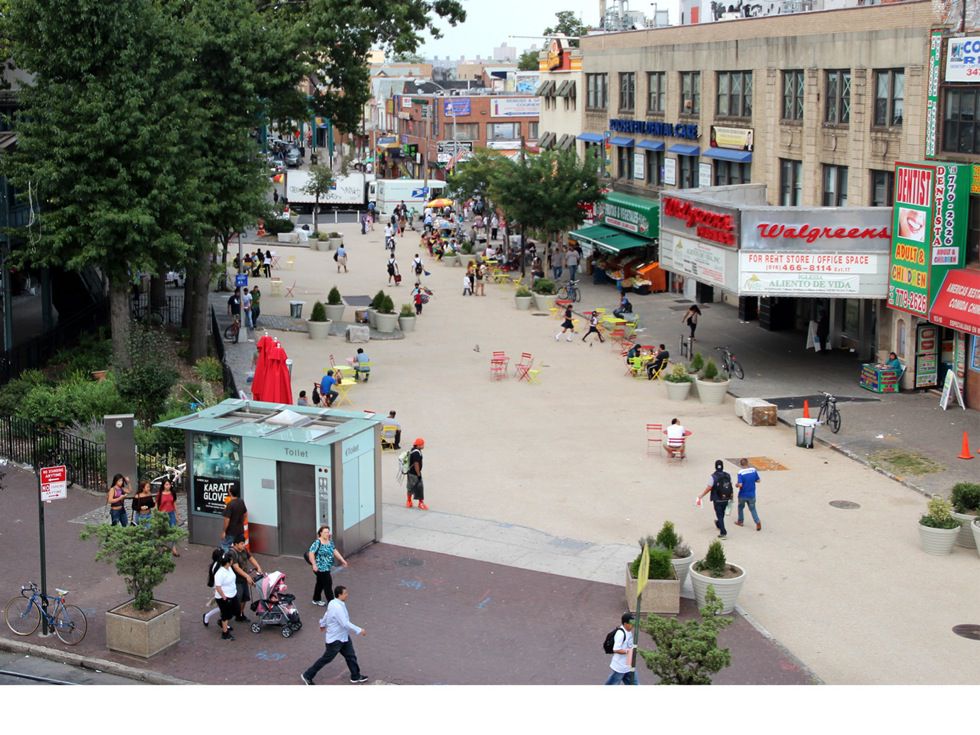 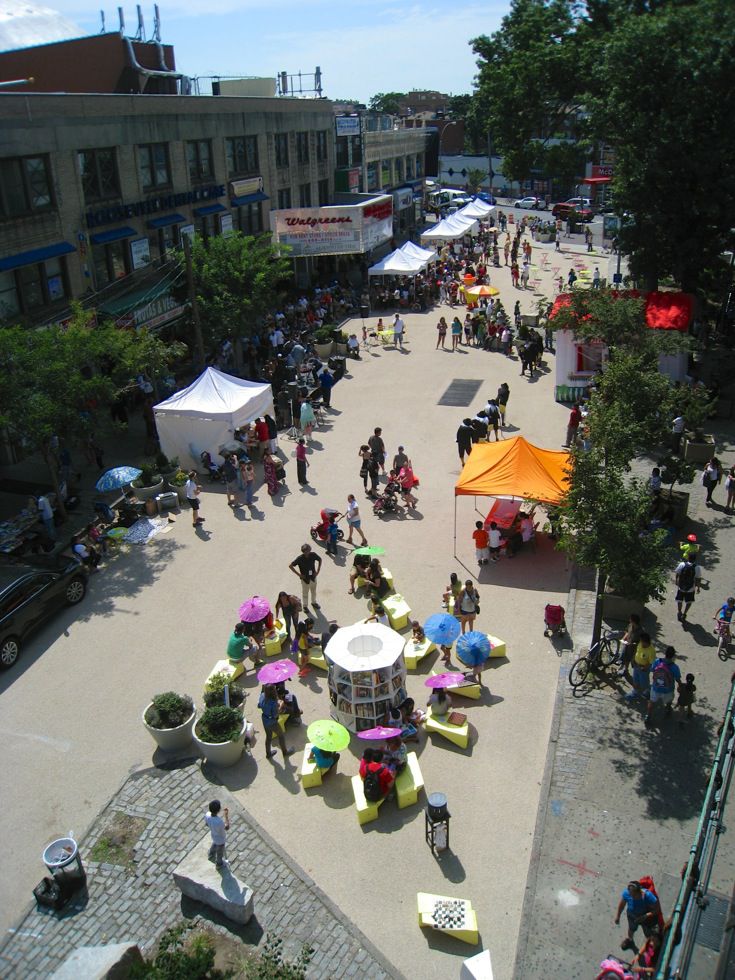 A service road ran between 104th Street and National Street just off of Roosevelt Avenue, separating local shops from a minor green space consisting of a few bushes and trees. Fewer than 100 cars per day drove on the service road, and the park space lacked seating or amenities and was rarely used. Moving trucks monopolized the service road, illegally using the 26 metered parking spaces and preventing customers from accessing the street’s businesses. The site is very close to a train station, and Roosevelt Avenue has significant pedestrian traffic along a narrow congested sidewalk. Nonetheless, the area was a popular community space, used for a weekly greenmarket and occasional events by residents of the extremely diverse neighborhood, which includes a mixture of South and Central American immigrants. The surrounding area has very little open space, and due to strong latent demand, the Corona Plaza site had long been on the community’s radar as a candidate for improvement.

In the following years, Queens Economic Development Corporation (QEDC) galvanized support for the Corona Plaza project, with help from a supportive local city council member, whose staff coordinated outreach to businesses. QEDC built a strong partnership with Queens Museum, which played an instrumental role in envisioning programming for the public space. Greenmarket, a project of GrowNYC which held a small farmers market on Fridays on the Roosevelt Ave sidewalk, favored pedestrianizing the roadway. The Queens Borough President, Community Board 4, and Corona Community Action Network (Corona CAN), a volunteer group of local business owners, supported the project as well.

After securing maintenance funding, QEDC applied to NYC DOT’s Plaza Program in 2011. NYC DOT accepted the application, putting the project on track for an interim design to bring faster results to the community. QEDC engaged project stakeholders and the public, and NYC DOT conducted bi-lingual outreach to the moving truck operators who currently parked illegally on the service road, passing out flyers about the public sessions. NYC DOT held community workshops to solicit feedback on the temporary design, which received public support. Although staff anticipated that removing 26 parking spaces might be contested, there was little opposition from store owners since the parking spaces had already been unavailable to business customers. In August 2012, NYC DOT installed Corona Plaza using temporary materials, consisting of benches, planters, and an epoxied gravel surface treatment. Queens Museum held a launch event and ribbon cutting to highlight the transformation with the local council member.

The 13,000 square foot pedestrian plaza is surfaced with temporary materials including an epoxied gravel mix of grey and tan granite and recycled porcelain. The mix produces a light-colored, skid-resistant surface that reflects light at night, creating a safer atmosphere, and that remains less slippery in rain, snow or icy conditions. The plaza edge is marked with a double white line, in keeping with NYC DOT’s design parameters. Heavy granite blocks, recycled from the old Willis Avenue Bridge, prevent motorists from entering the plaza. Reflective plastic bollards also mark the entrance to the pedestrian plaza to provide a visual notification to drivers. Since there are no curbs, tactile warning strips indicate the border between the plaza and the roadbed, meeting Americans with Disabilities Act (ADA) guidelines. The New York City Fire Department (FDNY) reviewed the design, designating an emergency path through the plaza for emergency vehicles to access fire hydrants and buildings.

The plaza’s temporary redesign provides amenities that animate the space. Two sizes of plastic planters add greenery, and umbrellas provide shade. Movable metal tables and chairs, as well as standard NYC DOT CityBenches, provide comfortable seating for socializing and relaxing. QEDC contracts with the Neighborhood Plaza Partnership to meet maintenance responsibilities such as keeping the amenities clean and free of debris. NYC DOT performs any necessary major repairs to the CityBenches as part of the department’s standard maintenance.

Following the temporary plaza installation, NYC DOT held a community workshop to assess public satisfaction. In 2013, NYC Department of Design and Construction (NYC DDC) issued a contract to a design team, which worked with NYC DOT to develop three concept designs for public review. At the one-year celebration of Corona Plaza, hosted by Queens Museum, NYC DOT will share the concept designs to solicit feedback. After selecting and tweaking the preliminary design choice, NYC DOT will seek approval from the Community Board and then from the Public Design Commission. Following PDC’s approval, NYC DOT will launch into preparations for the final design, such as coordinating with utilities and drafting contract documents. Once PDC approves the final design, NYC DDC will manage a bidding process before issuing the construction contract.

The permanent design will reconstruct the entire roadbed, including sidewalks. This space, curb-to-curb, includes approximately 30,000 square feet. Reconstruction will use simple, standard materials for easier maintenance, including standard tinted concrete for the plaza surface and CityBenches for seating. Coordination with the Parks Department will ensure that plants and trees meet city requirements.

The capital design will also provide infrastructure for a vendor kiosk. NYC DOT will issue a concession agreement to QEDC, which will select a vendor through an RFP process and issue a sub-concession agreement. All concession revenue will fund plaza maintenance, providing a sustainable long-term funding stream. The concession agreement prohibits other vendors on the plaza, so vendors who formerly used the sidewalks will be able to relocate to the adjacent area across 104th Street.