The Seattle Department of Transportation (SDOT) installs bus bulbs on priority transit corridors to improve operating efficiency. Though Washington state law requires car drivers to yield to a merging bus, drivers often fail to do so, causing delays that accumulate over the length of a bus route to substantially increase travel times. Bus bulbs allow buses to make in-lane stops rather than pulling out of traffic and to the curb. Bus bulbs also extend the sidewalk, creating more space for waiting pedestrians and offering amenities, such as shelters and seating. 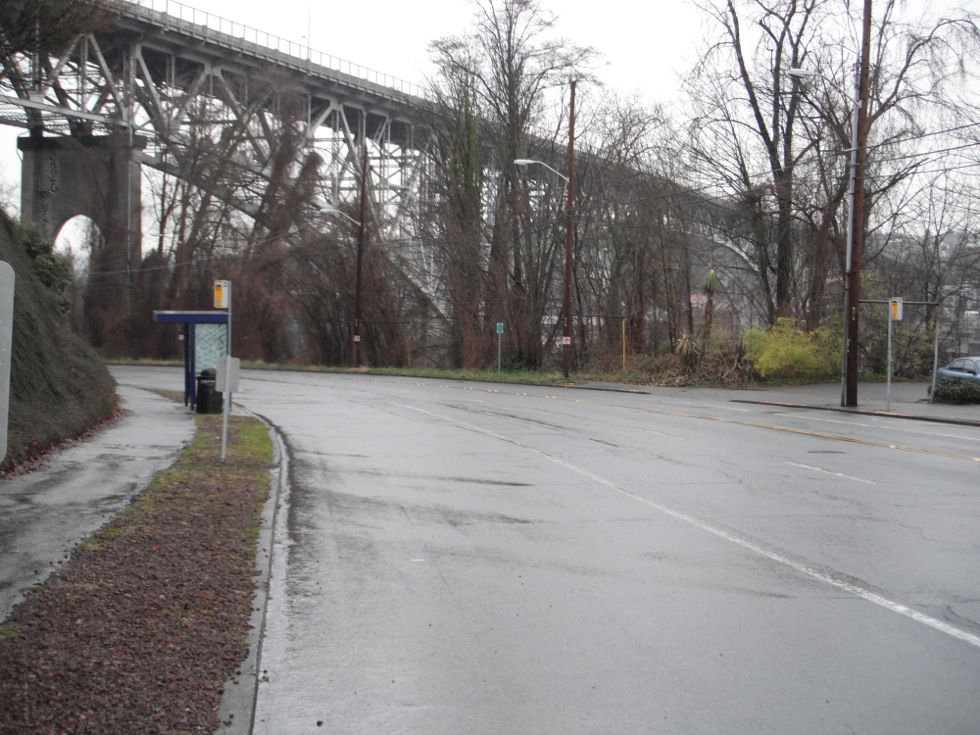 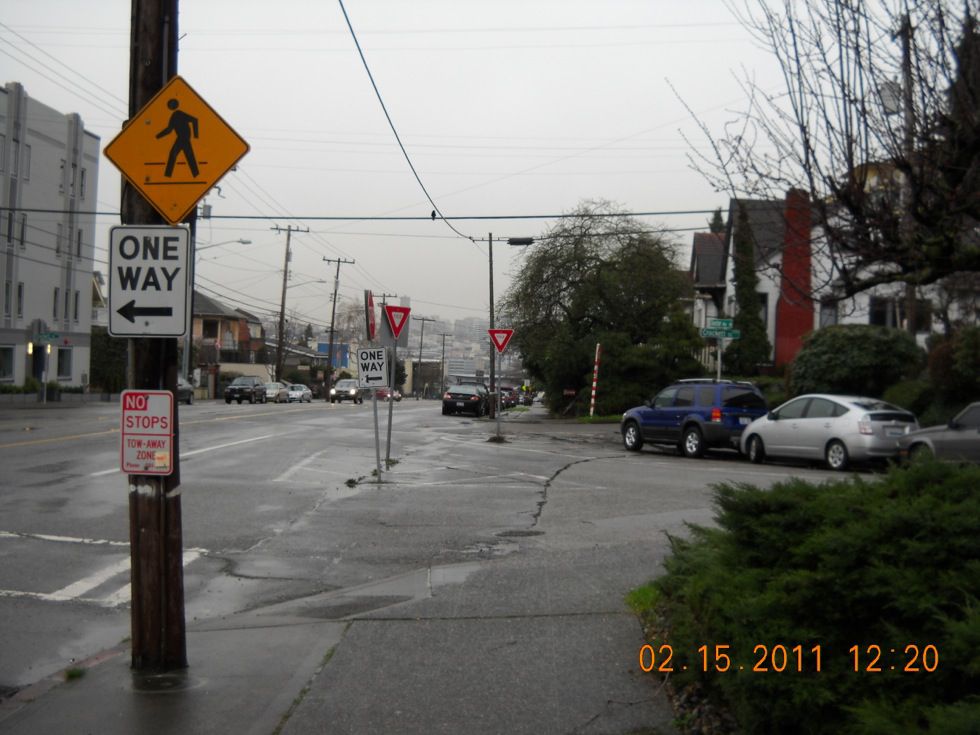 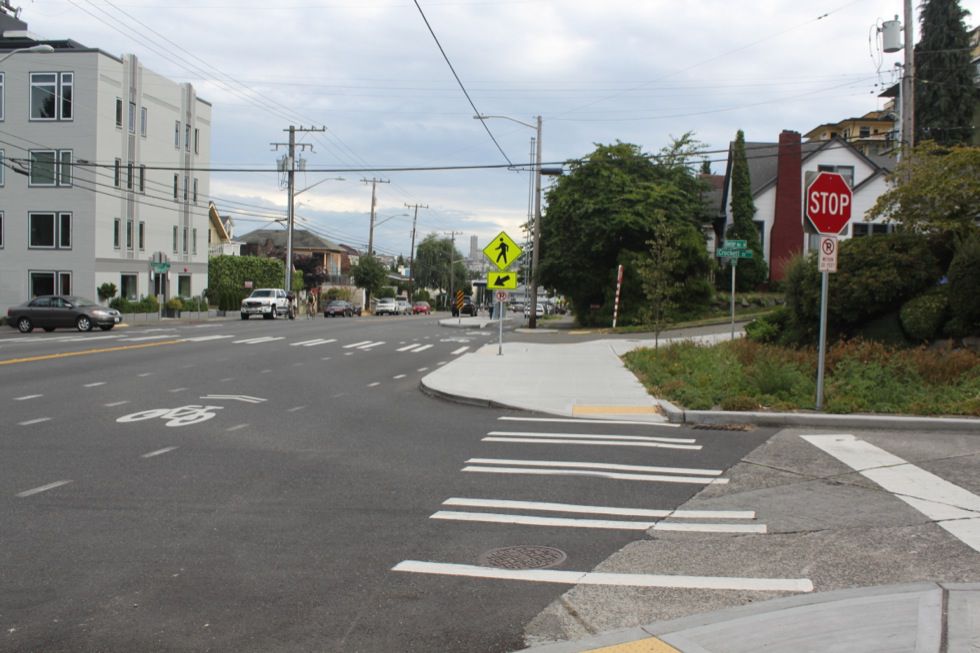 Dexter Ave, now a three-lane street with bike lanes, runs north from Seattle’s Belltown neighborhood, west of Lake Union. The street is located in a mixed-use area zoned for multi-family housing, though the northern extent of the corridor is primarily single-family homes. In 2011, SDOT redesigned Dexter Ave to better accommodate all users. The project resurfaced 1.5 miles of roadway, adding buffered bike lanes and bus bulbs.

In 1991, SDOT implemented a road diet on Dexter Ave, restriping the roadway from  four vehicle lanes to three (one travel lane in each direction and a center turn lane) with a bike lane in each direction. In 2011, when Dexter Ave was scheduled for resurfacing, officials re-evaluated this design. Average daily traffic counts on the corridor in 2011 ranged from 7,100 to 11,000, and SDOT determined that the low volume of turning vehicles did not require a center turn lane. Therefore, as part of the resurfacing project, SDOT re-channelized the roadway to have one vehicle travel lane in each direction with buffered bike lanes.

At first, the public voiced skepticism about the reconstruction, citing concerns about gridlock and the fear that eliminating the center turn lane would cause confusion. SDOT held open houses for community outreach, stressing that the design was open to revision and comment. SDOT’s original design called for a parking-buffered cycle track. However, feedback during an open house and subsequent two week comment period—concerns about the relatively steep grade of the roadway, the potential speed of downhill cyclists, and sight distances around driveways—prompted SDOT to revise the proposed design. The second concept maintained the curb-side parking, with a buffered bike lane adjacent to, and at grade with, the vehicle travel lane. This design also included bus bulbs for in-lane transit stops, routing the bike lane between the bus island and the curb. Public perception of this second design was more favorable, and SDOT pursued construction.

The project resurfaced 1.5 miles of Dexter Avenue between Westlake Ave N and Mercer St, removing the two-way left turn lane and instead striping one travel lane, a six-foot bike lane with a two-foot buffer, and a curb-side parking lane in each direction. Dedicated left-turn lanes were included at busy intersections.

At 10 of the 12 bus stops on the corridor (five stops in each direction), SDOT constructed dedicated transit islands which allow buses to make in-lane stops for boarding and alighting passengers. These bus bulbs are 10’ wide and approximately 80’ long to accommodate people waiting for the bus, and are constructed using standard concrete. Bus bulbs are generally located at the far-side of intersections with existing curb ramps at the sidewalk. SDOT used tactile warnings to mark the edge of curb ramps, and all bus bulbs are ADA accessible. At bus bulbs, the buffered bike lane is routed behind the bus stop, preventing conflicts between cyclists and stopped buses. Where there are bus bulbs and curb-side buffered bike lanes, there is no parking lane.

The design considered the potential for conflicts between cyclists using the buffered bike lane and pedestrians crossing it to access the bus islands. To limit conflicts, SDOT installed leaning rails across the back of bus islands to channel pedestrian flows to the curb ramps, directing bus passengers to cross the bike lane at one designated place.

The total project cost was $2.8 million, including base repair, resurfacing, drainage repair, sidewalk repair, new curb ramps, curb bulbs, bus islands, and channelization (signing and striping). Designing and constructing the 10 bus islands cost $253,603, including running conduit and handholes to each island. Seattle Public Utilities provided funding for the drainage repair, and the remainder of the project was funded by SDOT through the Bridging the Gap Transportation Levy, which Seattle voters approved in 2006. This funding source contributes to transportation improvements across the city, and enabled SDOT to undertake the Dexter Avenue North project.

Two years after project completion, public opinion is favorable, especially among bicyclists. Dexter Ave serves as the primary bike corridor to reach downtown, with morning peak counts of 300 southbound cyclists per hour. In comparison, the morning peak vehicle count is 850 southbound motorists per hour. Though the change in bus travel times was negligible, bus ridership increased by 30% between 2010 and 2013. In addition to improving bus efficiency and reliability, the project has also calmed traffic, removing the option for impatient motorists to use the left-turn lane to pass buses.