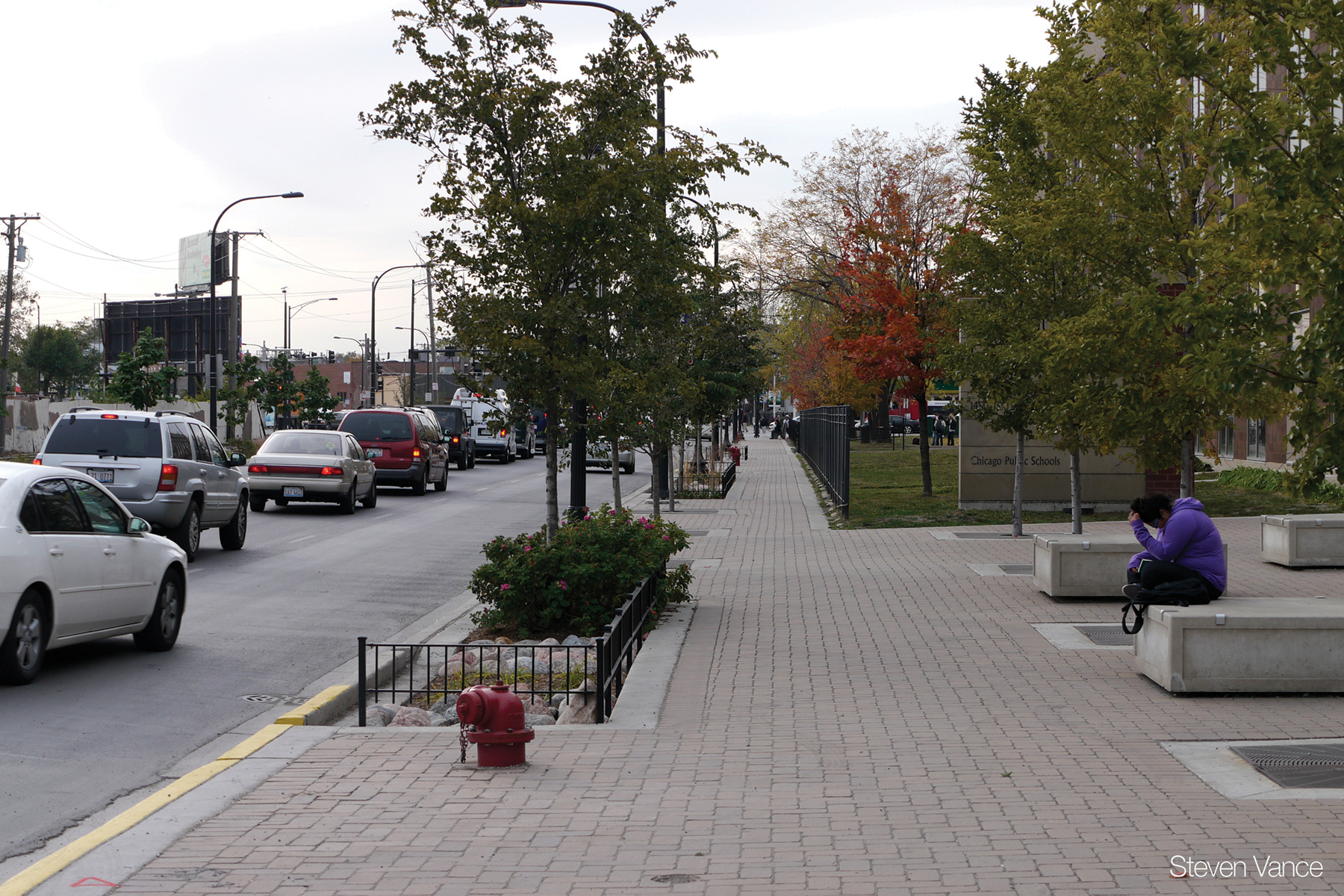 Stormwater management: Divert 80% of stormwater away from gray water infrastructure.

The Cermak / Blue Island Sustainable Street project transformed a 1.4 mile stretch of faltering industrial route into one of the greenest streets in the country, while piloting a process for future green street transformations that maximize the environmental and mobility performance of city rights-of-way.

Using a holistic systems approach, the project team implemented a street that embodied sustainability from design to materials selection and production to construction to performance.

The reconstruction of a 1.4 mile section of Blue Island Avenue and Cermak Road in Chicago’s Pilsen neighborhood is CDOT’s first Sustainable Street project, a pilot that sought to demonstrate how to design, source, and construct an environmentally productive, inviting, and safe urban street on an especially challenging corridor. The project street runs through a heavily industrial area adjacent to an active freight railway and still serves a significant volume of heavy truck traffic.

The project team had to balance their desire to transform the section into right-of-way that collected and retained large amounts of water—thus limiting the likelihood of outfalls into local waterways—while still serving the mobility and economic needs of the corridor.

Designers applied a “belt and suspenders” approach to the project: rather than simply installing standard swales or rain gardens, the team conducted a thorough investigation, and designed to maximize water infiltration. Each piece of the design sought to contribute to the overarching goal of the project: to make Cermak / Blue Island the “greenest street in America.”

Because the south side of the Cermak segment is adjacent to an active railway that precluded full sidewalk installation, the project seized the chance to implement continuous swales to capture large amounts of runoff.

Large infiltration planters were implemented on the north side of Cermak and along Blue Island in the sidewalk furnishing zone. Blue Island Avenue included changes to the curb line to accommodate bulb-out planters, narrowing the roadway and enhancing the pedestrian realm.

Infiltration planters were sited over catch basins, with two inlets surrounding each basin to direct as much runoff as possible into planters before reaching the gray water system. Bioretention cells included both a primary infiltration gallery directly beneath the cell and a secondary gallery under the sidewalks. This aggressive water storage capacity allows more than 80% of stormwater to be captured and stored, despite relatively poor infiltration in native soil.

The parking and bike lanes were striped over pervious pavers, allowing greater water capture and infiltration from the 80-foot wide roadway. The roadway itself is 40% composed of high albedo (highly reflective) pavement surfaces to reduce the street’s urban heat island effect.

Finally, the reconstruction created two new public plazas, which include large rain gardens to capture and treat water, along with valuable public space and seating to activate a formerly underutilized industrial street.

Apply a systems approach. Getting to a high performance project requires doing the necessary engineering to fully integrate strategies. All bioretention and street design elements are interlocking and contribute to the total impact.

Demonstrate the benefits of investment. Stakeholders supported the larger project cost because they understood the benefits of a more productive street over the long term.

Minimize utility impacts. CDOT has a policy that once a street is reconstructed, there is a moratorium on street cuts in perpetuity, requiring utilities and related agencies to coordinate infrastructure projects during the full reconstruction. Additionally, the City was able to design infiltration planters so that utility lines are able to continue through, allowing more efficient use of sought-after street width.

The project is exceeding its original goal of infiltrating 80% of stormwater runoff along the corridor.

New partnerships were enacted to maintain and monitor the street: the MWRD is partnering with the USGS to collect volume and water quality data at four wells, and CDOT partnered with the local business district to hand off maintenance after a two-year establishment period.

Retrofits including the bioretention as well as new LED lighting and solar and wind-powered bus shelters reduced the energy use of the street by 42%.

The City effectively utilized local and regional businesses and supply chains to reduce embodied implementation impacts and spur local growth: 76% of raw materials were sourced and manufactured within 500 miles of the project site, and 23% were sourced within 200 miles.

The project was 21% less expensive than Chicago’s average reconstruction of similar scale during the year it was completed, even with the multitude of innovative design features.