Bell Street Park is the City of Seattle’s first shared street project, establishing a new typology for streets as parks and open space. Initiated by Belltown neighborhood residents, Bell Street demonstrates how a bold vision for transformation can be realized through inclusive design and strong city/community collaboration. Proven as a successful shared street project, its application provides cities with a model case to reimagine the right-of way as both a thriving open space and an important transit connection. 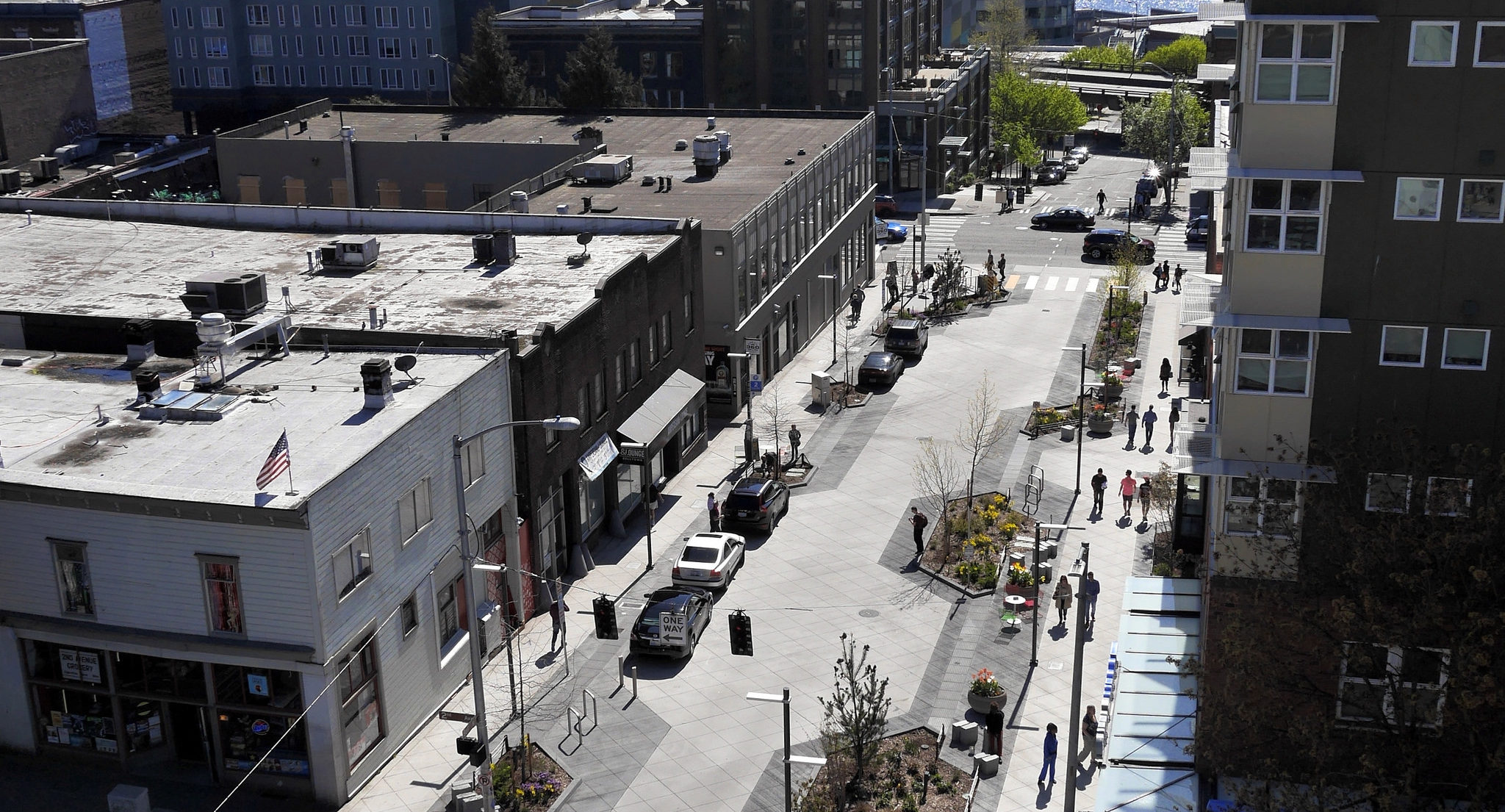 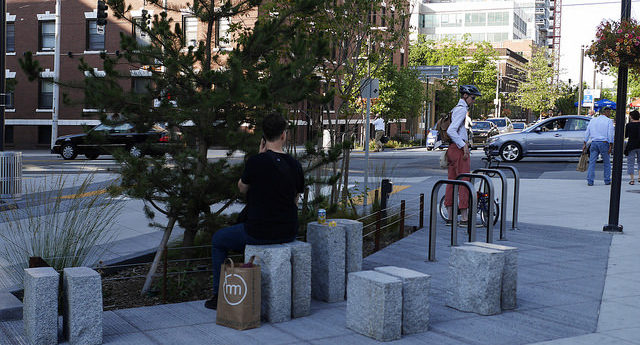 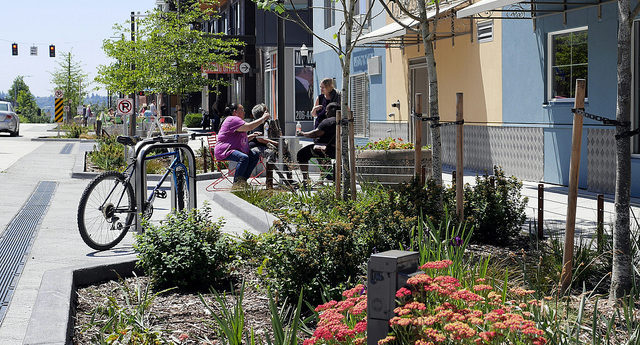 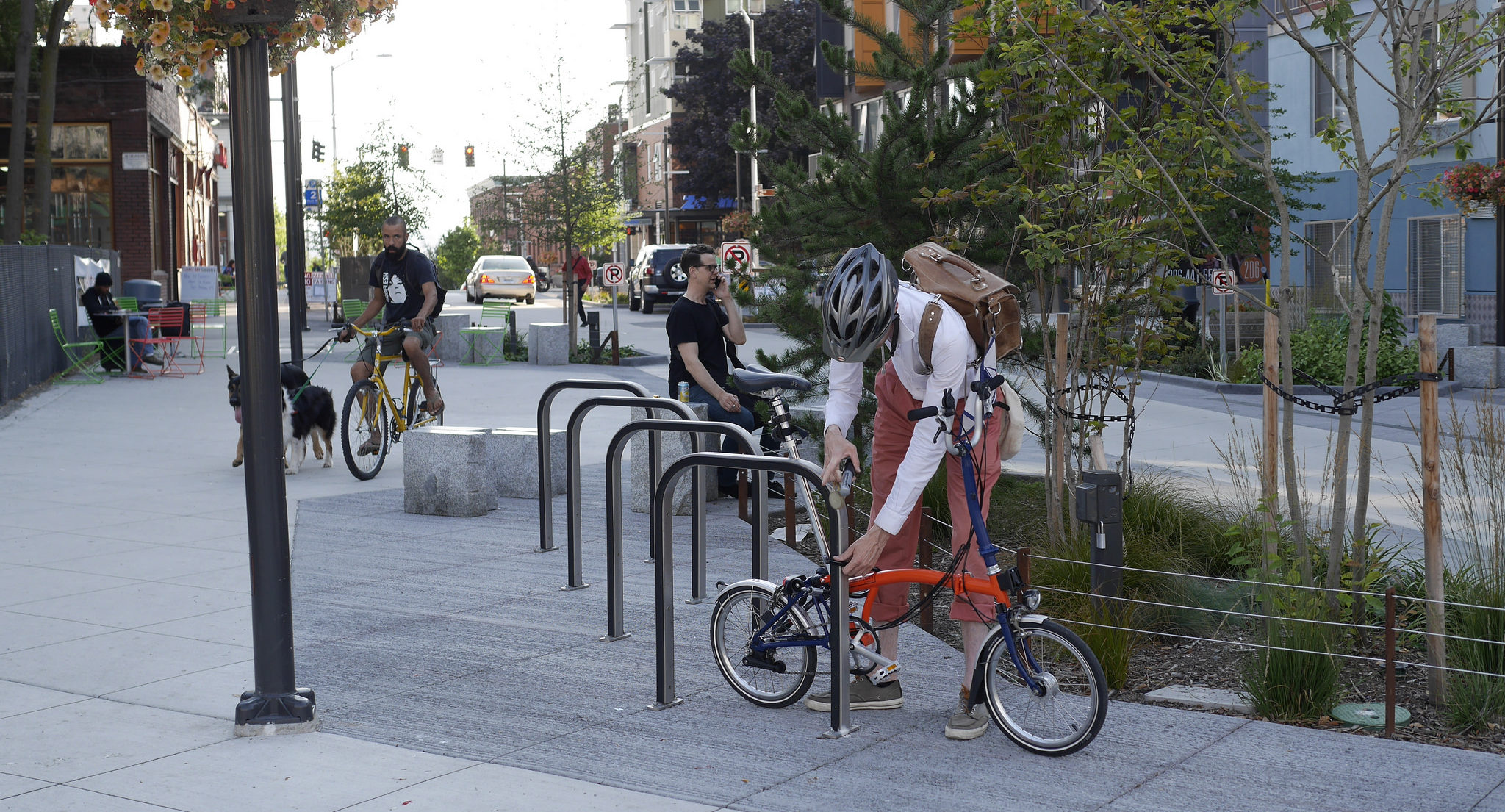 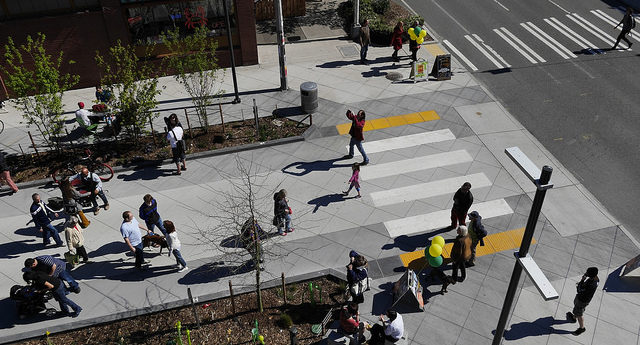 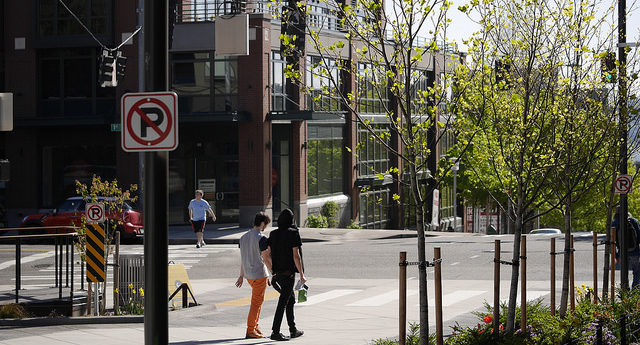 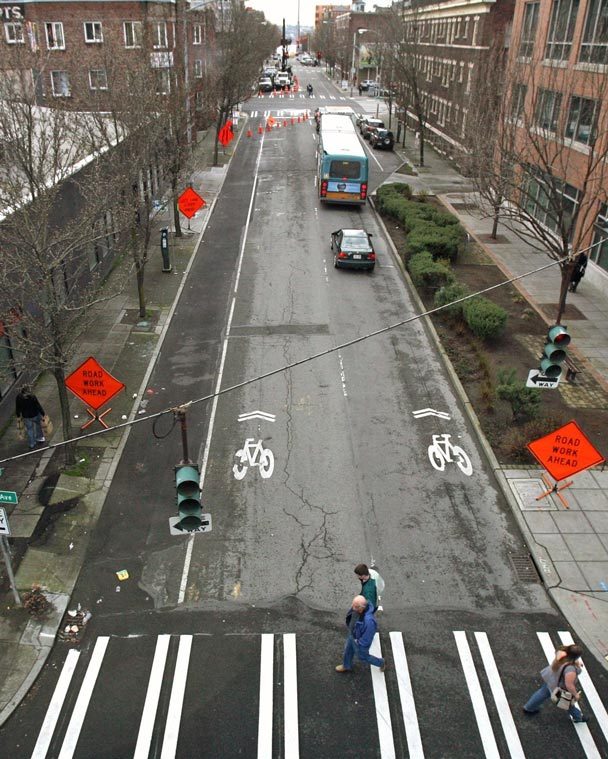 Belltown, the most densely populated neighborhood in Seattle, Washington, links historic Denny Park to Seattle’s waterfront and downtown. It is an eclectic neighborhood with a diverse mix of businesses, residences, and public service buildings. While the area experienced steady residential growth since the 1990’s, open space expansion had not kept pace and the neighborhood struggled to develop an active, inviting street life.[1]

Prior to reconstruction, Bell Street was a two-lane, one-way road with parking and sidewalks along both sides extending eight blocks. In 1985, the City initiated a Green Streets Plan that sought to improve pedestrian environment along Bell Street intersections, which led to installation of plantings and traffic bulbs at 1st and 5th Avenues, though remaining avenues along the corridor were unchanged. This stretch has also long been a critical corridor for buses—300 pass through daily (more than a third during PM peak hours).

In 2008, a City audit of parks and green space revealed to neighborhood groups that Belltown was falling short of its open space goal, and the City of Seattle was itself struggling to acquire land to develop as park space. At the behest of a Citizens’ Advisory Committee, voters approved a Park and Open Space Levy in 2008, expected to generate $146 million to develop land and transform rights of way into high-functioning public green space.[2]  In 2009, the Parks Levy Oversight Committee approved funding to create the Bell Street Park, and granted authority of Bell Street to Seattle’s Parks and Recreation Department (Parks & Rec). Working in collaboration with the City Department of Transportation (SDOT) as well as other applicable agencies, Parks & Rec began the process of transforming Bell Street from an auto-centric throughway into a shared community open space.

Belltown neighbors assumed an active role in guiding the direction of the street’s final design. While earlier plans and design meetings had introduced the shared street concept and begun to present the benefits and drawbacks, the community voiced most significantly a concern about public safety, especially creating improvements to traffic speed, protecting multi-modal users, improving lighting and furnishings, and providing green space. The project team presented both shared street and mode-separated concepts, and community members voiced nearly unanimous support for the shared street treatment.

The project team developed the following five design cues for the vision of Bell Street Park: Reclaim, Elevate, Grid, Twist, and Meander. These cues set forth the ideas of how to best activate the space for both mobility and community life. The project sought to reclaim previously dedicated driving space for more flexible use and utility. Design would elevate the street into a level, continuous surface. Materials established a human-scale grid of smaller paving blocks (4′ x 4′) as opposed to the usual “long” orientation of a straight paved street, and designers would twist the grid to visually indicate diagonal movement emphasizing store fronts and street amenities over thru-travel. Finally, the project team encouraged users to meander, offsetting the travel lane from the center of the street and varying paving materials to move thru-traffic on a meandering path.

The final design transformed Bell Street between 1st and 5th Avenues into a raised, 56,000 square-foot shared street with a single travel lane for pedestrians, buses, bicyclists, and autos. The  center mixed lane is 10′ wide with light gray paving blocks, with 4′ of darker gray flexible space on either side to allow through travel of wider vehicles, especially buses and emergency vehicles. The travel lane also shifts from side to side in a chicane-inspired treatment to calm driving speeds, and provides intermittent parking and loading zones. The roadway consists of continuous textured pavement flush with the curb to prioritize pedestrian movement. The use of texture and color cues slow traffic while providing visual eddies to delineate meandering activity zones for seating, planters, and art installations. Signage is included at shared street entrance points to alert road users that they are entering the Bell Street Park pedestrian priority zone. 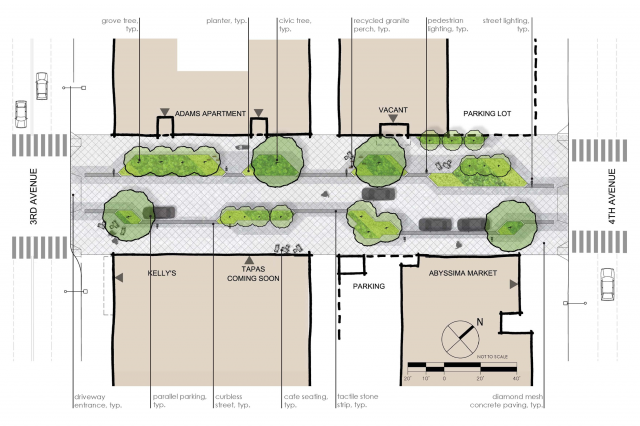 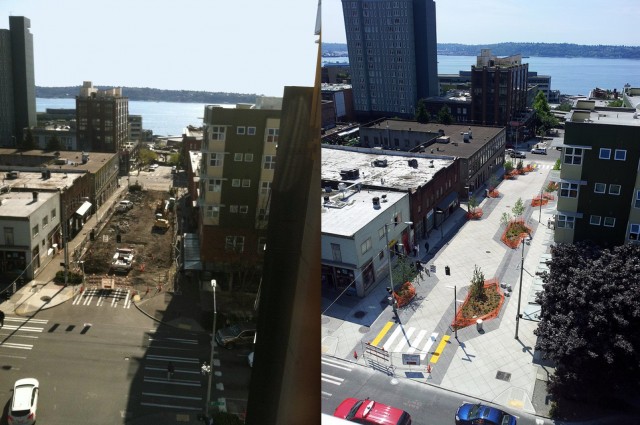 Bell Street, during and shortly after construction.

Bell Street Park involved multiple partnerships with city and local organizations. The project brought about a joint agreement between the City’s Parks & Recreation and Transporation departments, which laid out shared responsibilities for long-term maintenance of the urban park (Parks & Rec is responsible for street cleaning and upkeep of landscaped planters and street furniture, while DOT maintains streetlights and roadway). The project team worked extensively with Seattle Public Utilities, City Light, and Planning & Development from the outset to survey constraints of a complex and aged underground infrastructure. In some sections, the design was heavily guided by what the project team could and could not feasibly accomplish, resulting in realistic and functional designs. Parks & Recreation also partnered with The Metropolitan Improvements District (MID), a non-profit organization, to enlist street ambassadors supporting maintenance and public safety efforts. Coordination among these agencies has been crucial to successful implementation.

Since project completion, the Bell Street Park has become a favorite in the community, especially among business owners and neighborhood residents.  In October 2014, car traffic was restricted between 1st and 5th Avenues, requiring cars to turn off Bell Street at the first opportunity. The city found that during the first months of operation, while traffic slowed along Bell Street Park, volumes had only dropped from 3,800 cars per day to 3,400, jeopardizing the street’s ability to function as an inviting park. This traffic refinement ensured a calmer and more people-oriented space, and improved transit operations on a critical bus corridor. While private vehicles are forced to turn off the street after a block, bus routes are still served by the shared street. Buses traverse Bell Street with 10–15 minute or better headways all day and late into the evening, 365 days per year—the same as the volume prior to reconstruction.

In addition to traffic engineering revisions, the community is dedicated to activating the space with programming and community events.  After a few successful summer music and food events, the community is currently partaking in a planning process to identify ways in which users of the Park would like to see the streetscape used in the future. 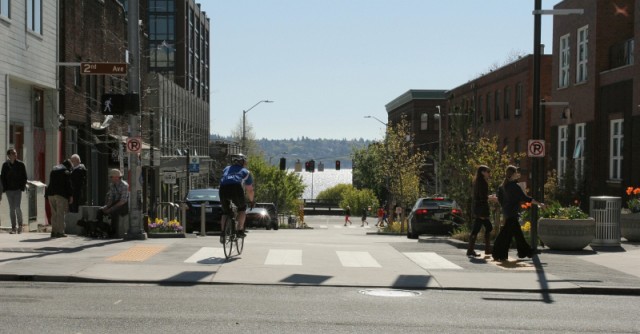 $5.0 million from voter-approved levy ($3.5 million for planning, design, and construction, and $1.5 million for right-of-way acquisitions)

[1] An Assessment of Gaps in Seattle’s Open Space Network: The 2006 Gap Report Update.