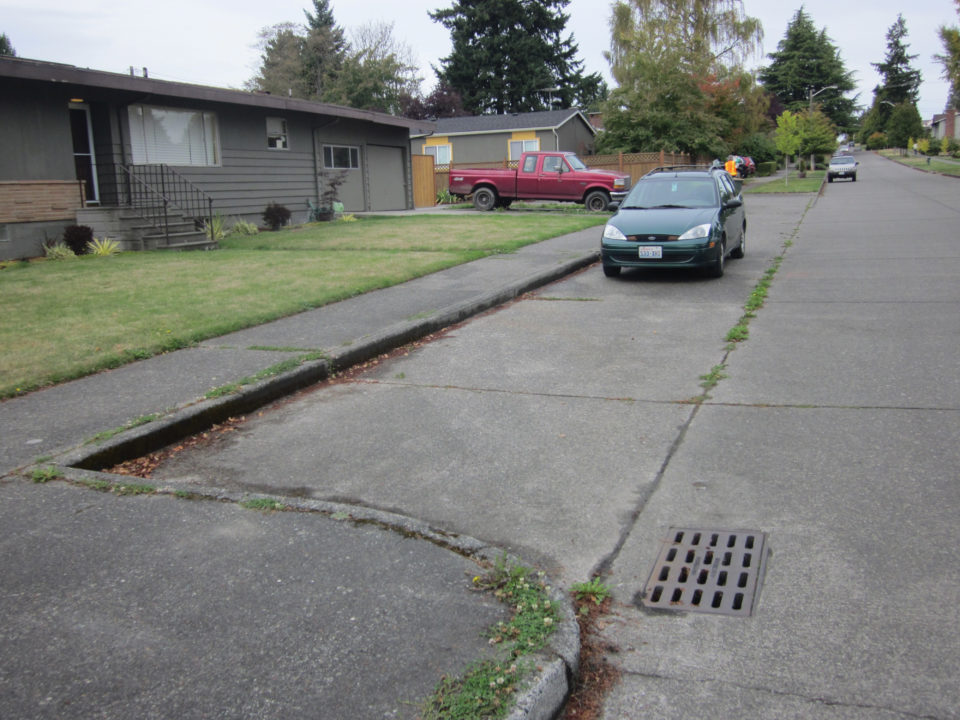 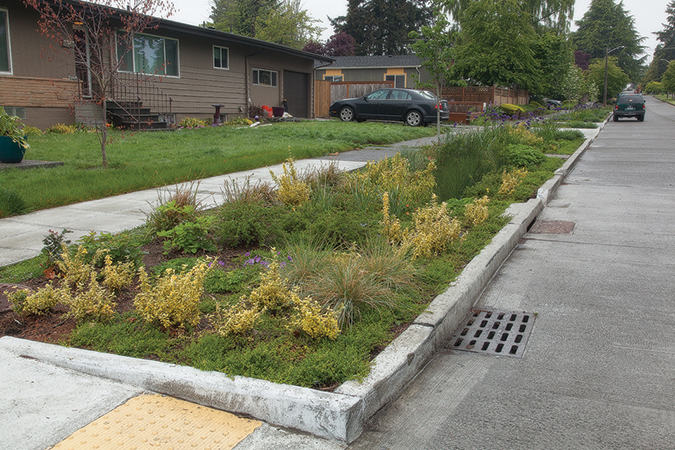 The Barton CSO Control project is designed to address combined sewer overflows in the Barton Combined Sewer Basin from discharging into Puget Sound at an outfall near Lincoln Park in Seattle, a popular recreation area.

The Barton Street Pump Station historically had an average of four overflows per year, discharging four million gallons of polluted runoff. King County needed to reduce overflows to no more than one per year on a 20-year moving average in order to comply with the State of Washington’s Department of Ecology requirements. The plan to do so includes both gray infrastructure (pump station upgrades) and green infrastructure approaches along City streets within the combined sewer basin.

King County constructed 91 bioretention cells with graded side slopes (see page <?>) in the planter strip on 15 blocks in the project area. When it rains, stormwater filters through the bioretention facility soil to a slotted drain pipe, which takes the water to a deep well for slow infiltration underground. The project team determined the number of needed bioretention facilities through hydrologic/hydraulic modeling.

The design team sited bioretention facilities on residential, non-arterial streets that were relatively flat (under 5% grade) with few driveways. Sites were also selected to avoid public and private utility conflicts, have planting strips at least 9 feet wide, and have minimal impact to on-street parking and existing mature trees.

Outline maintenance responsibilities from the onset. King County is responsible for all maintenance of the bioretention facilities including monitoring plant health, ensuring curb inlets into the cells are clear, removing weeds and debris, and monitoring drainage. Unmaintained bioretention facilities will become ineffective over time. In addition, a level of acceptable appearance is critical to preserving the public’s trust and approval of the project.

Clearly communicate community benefits. Extensive community outreach, and efforts to minimize impacts from construction, resulted in support of the project from community members. Showing community members images of what the bioretention facilities look like at all stages of construction, and at different times of year, helped manage community expectations and build enthusiasm from local stakeholders.

Allow time for the first installations. The project included initial review of the cell grading and mock-ups of key elements prior to constructing all the blocks. While this took some time, once they were approved and expectations established, the construction of the streets went smoothly and quickly.

Avoid jargon. Use accessible, consistent terms to help community members understand the need for green infrastructure and its benefits. Using the term “roadside rain garden” instead of “bioretention facility” increased comprehension of and acceptance of the project.

Preliminary monitoring and observations indicate that the rain gardens with the deep infiltration wells are performing as intended, and are infiltrating all the water that is draining into the facilities.