There’s change underfoot in Bellevue–literally. A light rail alignment is being tunneled beneath Bellevue’s downtown, ultimately connecting the city with Seattle to the west via high-capacity transit. This is a game-changer for the former high-tech bedroom community: this scale of transportation investment is poised to transform Bellevue’s built environment and transportation culture, shifting decades of auto-centric development into denser, more multimodal urban forms.

To prepare for this change, Bellevue is embarking on an ambitious program to expand its bike network, creating more transportation options to help absorb travel demand as the city grows. The Downtown Demonstration Bikeway, a 3/4-mile tactical project along 108th Ave NE, showcases this effort. It is the first continuous bike lane downtown, providing a safe space for people on bikes to travel and creating a central spine that connects to existing trails and the Bellevue Transit Center (used by 20,000 people daily). It also forms the bedrock of the city’s planned bikeway expansion: planners designed the project to undergo a rigorous evaluation in order to apply their findings to future projects in the city. 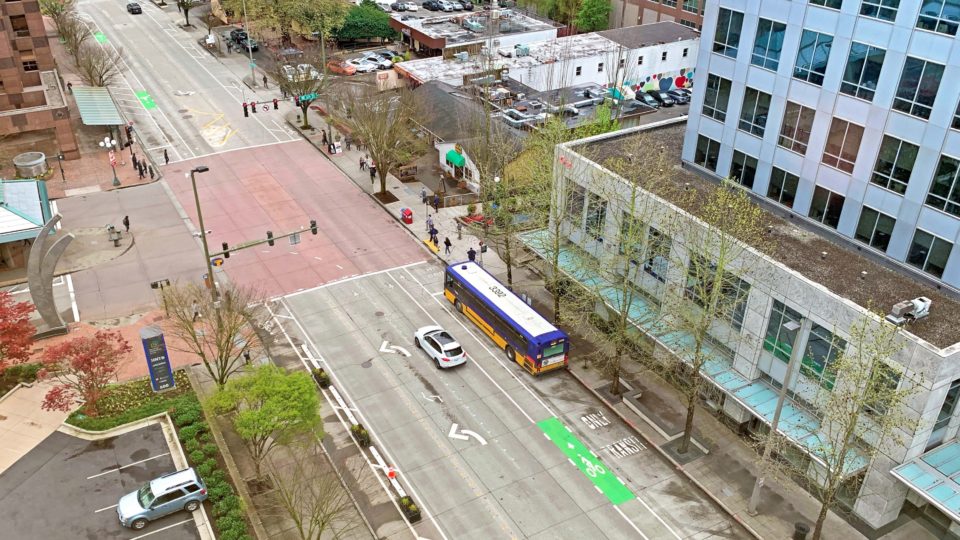 This 108th Ave NE bikeway was first conceptualized as part of the city’s 2009 Pedestrian and Bicycle Transportation Plan, but it took a City Council implementation initiative–and public endorsement at the ballot box–to dedicate funding and turning the plan into rapid implementation reality. After working with the downtown business community, Bellevue built the bikeway within 6 weeks, expediting construction with flexible and low-cost materials (e.g. paint, posts, and planters). This technique enabled the City to turn its streets into a laboratory; they tested the efficacy of multiple design elements–including different means of separation, markings at conflict zones, and transit-priority treatments–to see how they impacted the bikeway and operations along the busy multimodal corridor.

Planners measured their findings based on pre- and post-installation performance indicators over a six-month period. Using traditional evaluation methods and new technologies, they recorded how the bikeway affected the street’s safety, efficiency, and livability. 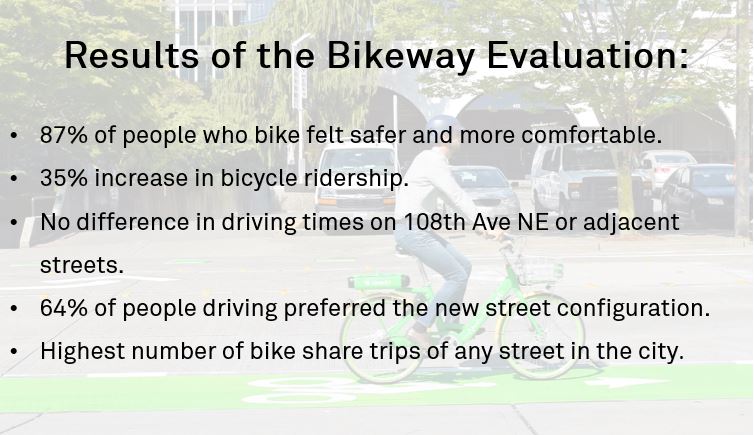 With these results, the City Council approved the bikeway permanently. Such a thorough and deliberate evaluation program enabled project planners to be critical about the success of the bikeway and transparent about its positive outcomes. Based on the analysis, the final 108th Ave NE bikeway design will be refined, making the street even safer for everyone using it. This will benefit downtown Bellevue’s changing landscape and, as more projects are designed and built, the city’s wider bikeway implementation program.

Bellevue was strategic with the Downtown Demonstration Bikeway. What appeared to be simple, low-cost changes created something truly game-changing for the city. With light rail scheduled to open in 2023 and population growth projected to continue, building out a high-comfort bike network is key to absorbing travel demand on Bellevue’s constrained and fast-changing streets. Planners knew that to successfully sustain the program, they had to get the first rapid implementation project right–both as a stand-alone facility and for what it could teach them about building future projects. The 108th Ave NE bikeway did not disappoint: it created a safer, more comfortable space to ride, improved the sense of place in downtown,  and contributed to fostering a more multimodal transportation culture that will help shape future growth in the city (and the city has the data to prove it). 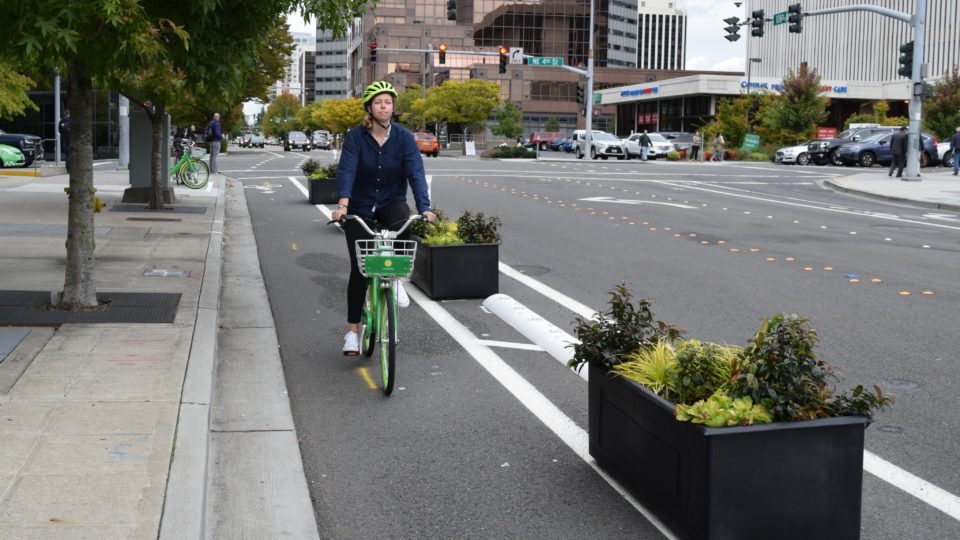 This picture shows what the project evaluation suggests: the 108th Ave NE bikeway is a welcoming downtown bike facility for a wide cross-section of Bellevue’s growing community, forming the foundation of the city’s planned network.