Last year, the City of Chattanooga redesigned a 3-mile stretch of E. Martin Luther King Boulevard, a major 4-lane east-west street in the city. This project was initiated to address longstanding safety concerns along the corridor, where the 85th percentile speed was 10-15 mph over the speed limit and the crash rate was 2.5 times higher than the state average. Redesigning the street also rectified past planning mistakes made along the route, historically the city’s most important cultural and economic corridor for African-American businesses and residents.

For the local community, E. Martin Luther King Blvd. has been subject to a history of damaging transportation planning. When the original 2-way road was converted to half of a 1-way pair in the auto-oriented 1950’s, the local business district was decimated and area residents developed a distrust for top-down planning. Although the street was rebuilt as a 2-way road in 2003, this experience had already cultivated an uneasiness in the community about redesigning streets. That’s why the city took extra steps to work with the local area when they initiated the E. Martin Luther King Blvd. safety project; they wanted to address the perception that it was yet another unsolicited municipal action that would damage the strength and character of the boulevard.

Before: Martin Luther King Blvd. is a major cultural and business corridor in Chattanooga. For years, its vitality was impacted the street’s design: high vehicle speeds and inadequate pedestrian infrastructure created an environment for people to pass through, rather than visit.

Proposed on the heels of a high profile street improvement project that received significant bikelash, Chattanooga was proactive along the project corridor. Determined to improve public engagement, the city slowed down their planning process and invested resources in an intensive outreach effort, learning from and building coalitions with local businesses, neighborhood associations, and residents. They hired dedicated public engagement staff to focus on deeper, more meaningful outreach methods, spending months to speak with people on street corners, public spaces, and at local events. This process helped the city better understand and respond to the local community, working to reconcile past errors while pursuing a safer, right-sized design for E. Martin Luther King Blvd.

This process identified a community desire to comfortably walk along or cross the street in order to visit local businesses, which fast traffic and long crossing distances had previously prevented. By extending the project timeline to complete more outreach, the city was able to piggyback on planned paving work and expand the initial scope of work–a road striping project–into a complete streets treatment that incorporated community needs. Chattanooga improved the corridor for people of all modes by right-sizing travel lanes, adding bike facilities, and improving pedestrian conditions through enhanced crossings, curb ramps, and new seating, trash cans, and trees. The city also installed bulb-outs to improve transit operations: some of the busiest bus routes in the city travel along this corridor. 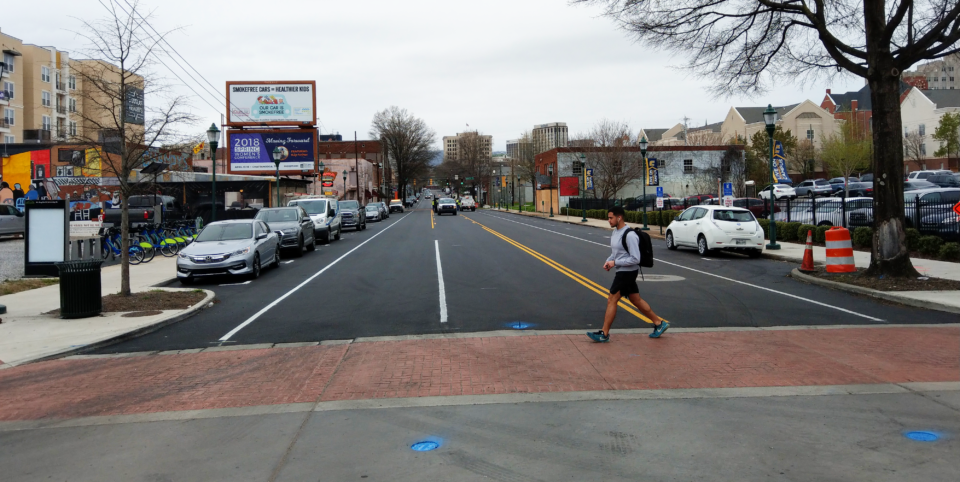 After: Working in-depth with the local community, the City of Chattanooga redesigned E. Martin Luther King Blvd. Before and after photos show a number of design changes that not only improved safety, but created a stronger sense of place along the corridor.

Sustained and targeted outreach was central to the E. Martin Luther King Blvd. road safety project. It created a forum for the city to plan with the local community, while also building public support for the project and trust in the city’s efforts. By lowering speeds, increasing pedestrian activity, and cultivating a strong sense of place, this complete street treatment transformed the corridor, which is now being lifted up by the community as a great place to be in, not just travel through. These results were possible because the city dedicated resources for intensive engagement in an area that stood to benefit from it. What started as a straightforward redesign was transformed through engagement, and what started as a road diet became a complete street that reflected local desires, needs, and relationships with the city planning process. The E. Martin Luther King Blvd. project helped build trust between the city and local stakeholders, an outcome that–along with safer road conditions–will continue to realize benefits into the future.