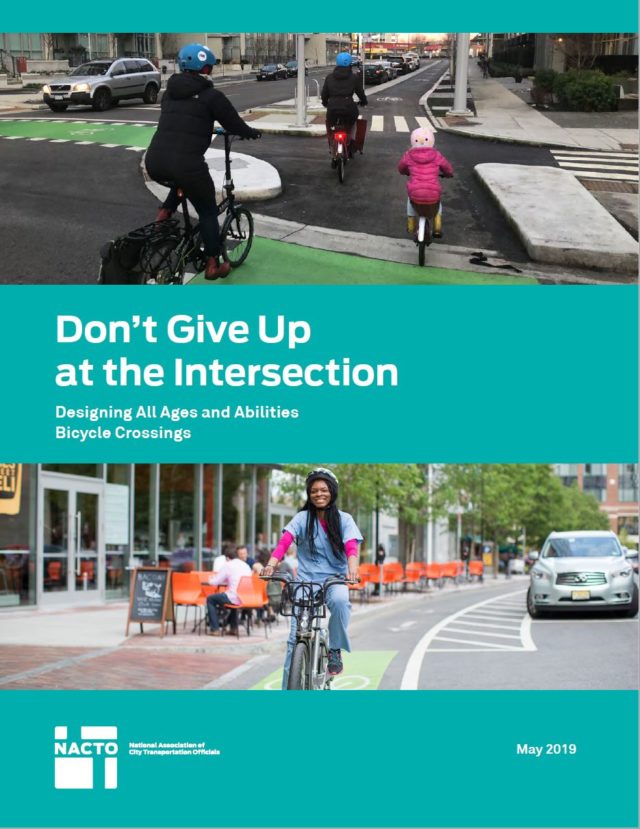 43% of Urban Bicyclist Fatalities Occurred at Intersections in 2017

(San Jose, CA) The National Association of City Transportation Officials (NACTO), an organization that represents 71 major cities in North America, today released best practices for next-generation intersection designs that save lives and make walking and biking more comfortable for people of all ages and abilities. The new guidance, Don’t Give Up at the Intersection, expands the groundbreaking NACTO Urban Bikeway Design Guide with new diagrams detailing intersection design treatments and signal strategies that reduce vehicle-bike and vehicle-pedestrian conflicts.

The guidance, funded by Knight Foundation, uses three principles to enhance safety at the intersection, where conflicts between street users are most frequent:

Don’t Give Up at the Intersection diagrams best practices for:

The guidance also details signal phasing strategies that enhance safety, while maintaining or improving street capacity and compliance on all modes. Best practices covered include implementation strategies, from quick-build to permanent techniques, allowing cities to rapidly design and implement projects and make changes before casting designs permanently in concrete.

“Our cities are facing the urgent task of reducing greenhouse gas emissions from transportation, and making biking safer and more comfortable is key to a climate-positive future,” said Corinne Kisner, Executive Director of NACTO. “People will bike if they have safe places in which to do so. Making intersections safer is essential for creating inviting bike networks for people of all ages, backgrounds, and abilities.”

“A bike lane is only as good as its weakest intersection,” said Kate Fillin-Yeh, NACTO’s Director of Strategy. “Starting with the title, NACTO’s newest guidance product, Don’t Give Up at the Intersection, helps officials, planners, and engineers design safe, comfortable facilities at the most difficult points.”

“Under our Vision Zero initiative, New York City has led the country by creating more and safer bike lane miles — including over 100 miles of fully protected bike lanes in the last five years,” said New York City Transportation Commissioner Polly Trottenberg. “However, we have discovered that intersections, where the vast majority of serious bicycle-involved crashes happen, create some of the most persistent design challenges. We are proud that the NACTO guidance being released today builds on the Cycling at a Crossroads study we released last year and are certain it will help direct cities and localities how to make the kind of sensible, inexpensive, and lasting changes that can make intersections across the country safer for all users.”

“NACTO publications like the Urban Street and Urban Bikeway Design Guide have been enormously helpful for San José as we have improved the safety and comfort of our streets in recent years,” said John Ristow, San José’s Director of Transportation. “The new intersection guidance is a welcome addition as cities like ours make those crucial, and often tricky, connections that turn better bikeways and sidewalks into cohesive networks.”

“Intersections are where people walking, biking, and driving interact most. Making these locations as safe as possible is a key element of our Vision Zero commitment,” said Joseph Barr, Cambridge’s Director of Traffic, Parking, and Transportation. “NACTO’s new intersection design guidance gives cities like Cambridge direction on how to approach some of the most complex pieces of our street networks and make the best use of the space on our streets.”

“Comfortable, safe, and efficient bikeway intersections designed for people of all ages and abilities are critically important for getting more people to bike in our cities,” said Luann Hamilton, Deputy Commissioner of the Chicago Department of Transportation. “NACTO has developed an essential design guide for intersections of all shapes and cities of all sizes. Chicago looks forward to using this guidance as we continue to expand our network of high-comfort bikeways.”

“We’re excited to be a part of this important collaboration with other NACTO Cities advancing intersection design practices across North America,” said Lon LaClaire, Vancouver’s Director of Transportation. “Improving intersections is a critical part of moving towards our goal of zero fatalities and serious injuries, and this guidance will support us as we continue to expand Vancouver’s world-class all-ages-and-abilities bicycle network.”

“NACTO’s new intersection guidance is an essential complement to the Urban Bikeway Design Guide, which we and our peer cities have used for years to develop safer and more comfortable bikeways for all,” said Robin Hutcheson, Minneapolis’ Director of Public Works. “With these new tools, cities will be able to tackle the toughest part of bikeway design, and where safety matters most – the intersection. As we rapidly expand our on-street opportunities for comfortable and safe biking, we’ll be using this new tool at every ‘turn’.”

Based on proven best practice on North American cities, and on the groundbreaking work in cities as diverse as Cambridge, Chicago, Portland, Salt Lake City, San José, San Francisco, and New York City, Don’t Give Up at the Intersection is designed to be used in concert with NACTO’s Urban Bikeway Design Guide and the guide’s companion document, Designing for All Ages and Abilities. These guidance documents provide the tools cities need to build comprehensive and connected bike networks that attract riders and make streets safer for everyone.

Don’t Give Up at the Intersection is available for free online at nacto.org/saferintersections

About the National Association of City Transportation Officials (NACTO)
NACTO is an association of 82 major North American cities and transit agencies formed to exchange transportation ideas, insights, and practices and cooperatively approach national transportation issues. The organization’s mission is to build cities as places for people, with safe, sustainable, accessible, and equitable transportation choices that support a strong economy and vibrant quality of life. To learn more, visit nacto.org or follow us on Twitter at @NACTO.

About the NACTO Urban Bikeway Design Guide
The NACTO Urban Bikeway Design Guide is North America’s city-focused resource for creating safer, more attractive, and livable streets for everyone through better-designed bike facilities. Since its first release in 2011, the Guide has been officially endorsed by 64 cities and states, and by the federal government, and has been used to design hundreds of miles of high-quality bike facilities in cities.