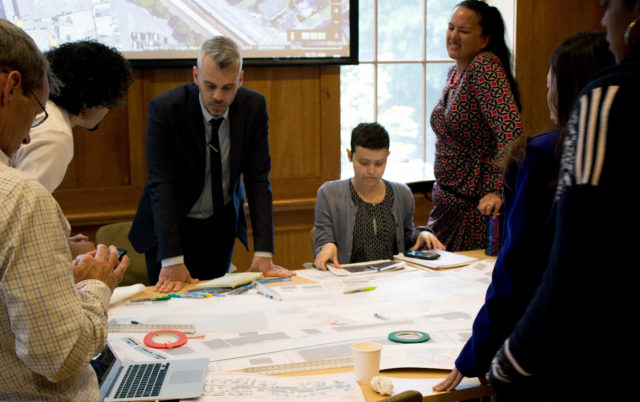 Last month, NACTO partnered with the City of Cambridge, MBTA, and TransitCenter—and with thanks to funding and support from the Barr Foundation—to host a two-day transit roadshow, accelerating year-long efforts to transform Massachusetts Avenue in Cambridge into a better corridor for transit and an even more vibrant place for people.

Leaders from peer cities, including Seattle, San Francisco, and New York City, shared their insight and experience, and provided technical assistance to Cambridge and MBTA. Over the course of the two days, participants applied insight from peer cities, concepts from the NACTO Transit Street Design Guide, and findings from previous design work over the past year, into a series of ambitious conceptual designs for four sections of Massachusetts Avenue where transit service is most subject to delay and unreliability.

Each of the resulting design concepts substantively addresses transit speed and reliability, comfort for people walking to and waiting for transit, and safety for people biking along the corridor. The roadshow concluded with an in-depth look at performance evaluation and implementation strategies, giving Cambridge and MBTA a roadmap for implementing these innovative projects.

We look forward to seeing the results of this transformative effort, raising the state of transit and improving walkability in one of the region’s most important transit corridors. Stay tuned also for more progress from the other three Transit Accelerator Cities!

Thank you to Sean Quinn from NYC DOT, Sean Kennedy from SFMTA, Bill Bryant from King County Metro, all the staff present from the City of Cambridge, the City of Boston, the MBTA, MassDOT, Town of Watertown, and the Town of Arlington. Thanks also to the Livable Streets Alliance for co-hosting StreetTalk: Cities on the Move, which attracted 130+ Cambridge, Boston, and regional staff and advocates devoted to building better transit service in the region.