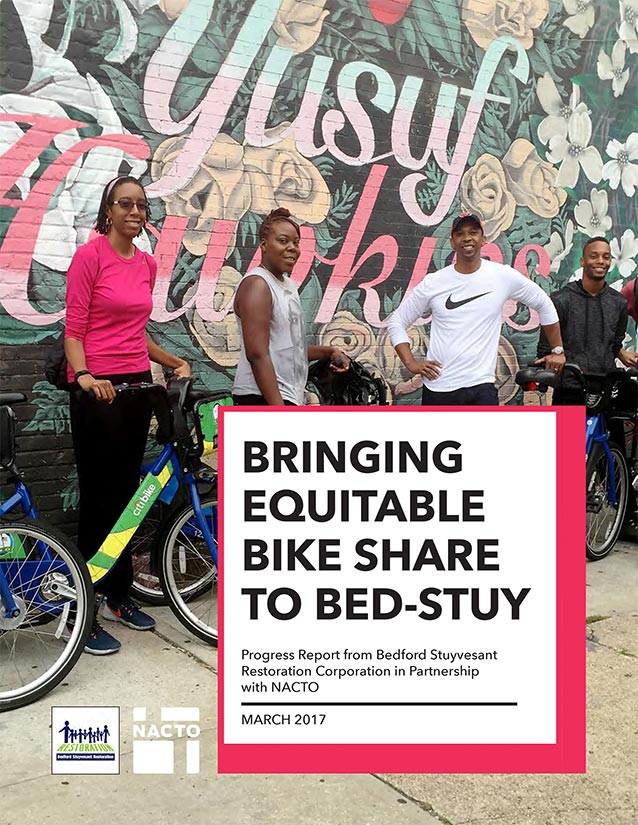 Cities across the country are working with local partners to ensure that the benefits of bike share are equitable, and that bike share is accessible to people from all backgrounds. One such partnership, between Bedford Stuyvesant Restoration, NYC DOT, the NYC Department of Health, and Motivate (the operator of Citi Bike), successfully changed perceptions on bike share, from what some perceived to be an out-of-reach amenity for newer residents, to a tool that all residents can use to meet their own personal goals.

In 2013, Citi Bike, the nation’s largest bike share system, launched in New York City. With 6,000 bikes and 332 stations, the system provided easy access to bikes in a variety of neighborhoods in Brooklyn and Manhattan, including Bedford Stuyvesant. The system was quickly a ridership success, racking up over 6 million trips in its first 7 months of operation, and 10 million and 14 million trips in each subsequent year. But, ridership rates differed greatly by neighborhood. In particular, ridership in the Bedford Stuyvesant neighborhood of Brooklyn, a low-income neighborhood with a majority population of people of African-Caribbean descent, was well below the citywide average. Even though the area had worse health outcomes and fewer transit options than many other parts of the City, a disproportionately lower number of Bedford Stuyvesant residents were taking advantage of the mobility and health benefits of bike share. In 2015, a grant-funded partnership between Bedford Stuyvesant Restoration (Restoration), Motivate, the operators of the Citi Bike program, NYC Department of Transportation (DOT), and NYC Department of Health and Mental Hygiene (DOHMH), formed to address the issue. Coalescing largely around Citi Bike’s potential as a tool to improve health outcomes and mobility opportunities for the residents of Bedford Stuyvesant, the Restoration Partnership saw clear results. 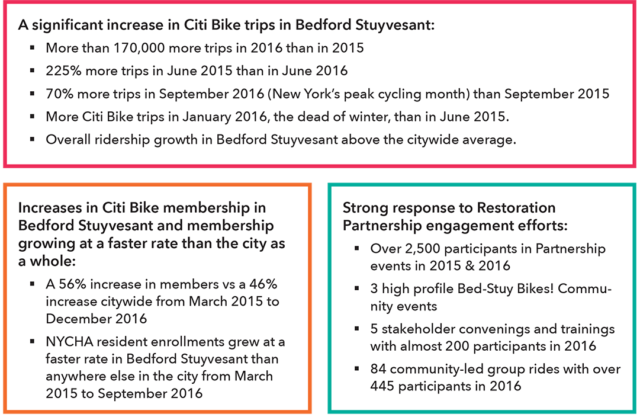 The success of the Restoration Partnership is based on its organizing approach and the strong physical foundation provided by the Citi Bike system itself. The Partnership was led by Restoration, a community-based development corporation with 50 years of established trust in the community. Partnership programming was woven into existing programming, showing local residents how Citi Bike could serve them in their daily lives – getting to grocery stores and farmers markets, to financial services or classes at Restoration, or as part of recreational, fun activities hosted by local groups. The Partnership used the two system expansions – in August of 2015 and 2016 – to build momentum. The August 2015 system expansion was particularly crucial to the Partnership’s work because it more than doubled the number of stations in Bedford Stuyvesant and surrounding neighborhoods, increasing Citi Bike’s usefulness for a wider variety of trips.

The Partners were also keenly aware that their work would have to address perceptions of Citi Bike and change the pervasive sentiment that the system was “not intended for” people of color. In two years the Partnership hosted over 84 community rides and 3 Bed-Stuy Bikes! events, reaching over 2,500 Bedford Stuyvesant residents. Community and internal champions stepped up to significantly improve both Citi Bike’s image and its programmatic offerings in ways that increased access and attractiveness for low-income people and people of color.

The experience of the Restoration Partnership holds core lessons for other groups and individuals working to address community health and mobility needs and to make cycling and bike share relevant to a wider audience. Over the past two years Citi Bike membership and ridership in Bedford Stuyvesant have increased significantly. These increases are tied to the Partnership’s work. Overall, the Partnership is changing the face of who rides in Bedford Stuyvesant, encouraging more people to use Citi Bike for commutes and pleasure, and giving long-time residents new ownership over changing streets and new safety infrastructure.