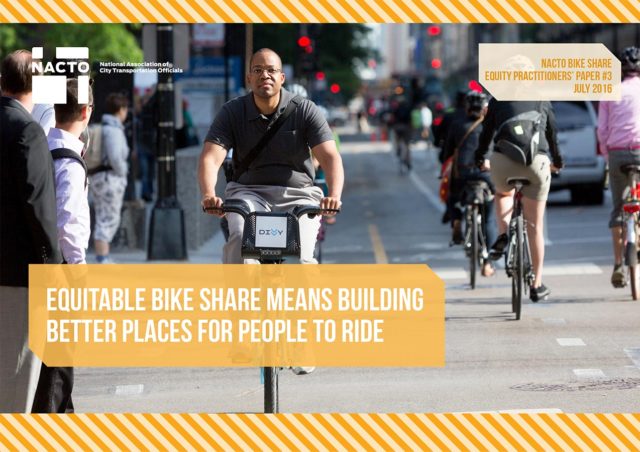 As cities across the U.S. build comfortable, protected bike lane networks, the number of people biking is going up and the risk of death or injury to each individual bike rider is declining, new research from NACTO shows. In an analysis of seven U.S. cities, NACTO’s third Equity Practitioners’ Paper looks at the relationship between building bike lanes and bike safety, and finds that municipal policies that encourage bicycling, like introducing large-scale bike share programs, make it safer for everyone on a bike. 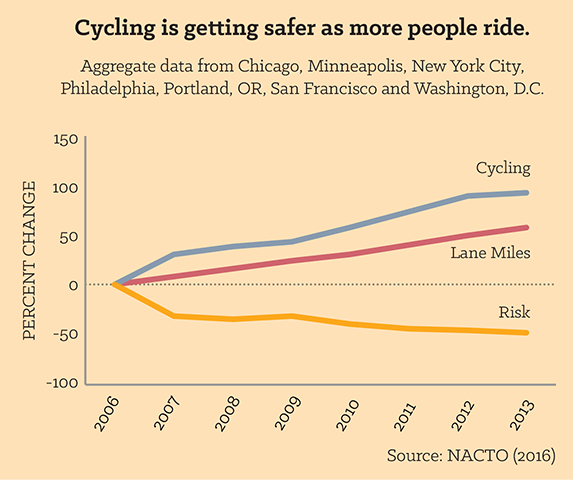 “NACTO cities are leading the way on safety and this new analysis makes it clear why,” said Seleta Reynolds, General Manager of the Los Angeles Department of Transportation and NACTO President. “Each new facility we put down multiplies our investment in our city streets. High-quality bike lanes attract riders and are essential to increased safety for everyone.”

“People want and need safe places to walk and bike, and safe ways to get to their jobs or schools,” said Carniesha Kwashie of the Mayor’s Fund for Philadelphia and the Grant Manager of the Better Bike Share Partnership. “This analysis by NACTO highlights the fundamental fact that building safe streets underscores all approaches to building a more equitable city and society.”

“As we launch BIKETOWN, we do so knowing that we have built a strong foundation for a successful system: a large network of high-quality bike lanes,” said Leah Treat, Commissioner of the Portland Bureau of Transportation. “Our safety record, like that of our peer cities, is the result of hard work and focus and the City of Portland is proud to be recognized as a leader.”

“Not only is building better bike lanes and supporting them with long-term community engagement essential for safety, it’s also an important step on the path to a more equitable bike infrastructure,” said Tamika Butler, Executive Director of the Los Angeles Coalition. “Cities should use NACTO’s latest research to double-down on building high-quality bike facilities, narrowing the safety gap for our historically neglected and most vulnerable road users.”

“Motivate and the hundreds of thousands of people who ride our bike share systems each year value having safe places to ride,” said Jay Walder, President & CEO of Motivate. “From New York to Portland and in between, the cities where we operate have invested in building more safe bike infrastructure and we are glad that our bike share systems can help contribute to safety in numbers as well.”

Equitable Bike Share Means Building Better Places for People to Ride (pdf) is the third in NACTO’s Equity Practitioners’ Paper series, which highlights best practices for cities aiming to address equity issues while introducing or expanding their bike share systems. All three papers, along with additional resources, can be downloaded free of charge at nacto.org/bikeshare.

Bike share has rapidly emerged as a new transportation option that can bolster public transit usage and increase cycling, with systems in in over 50 U.S. cities. As cities and towns around the country focus on sustainability and equity, bike share systems can play an important role in safety, accessibility, and livability efforts by making it easier for people to get around. To facilitate conversations between peer cities, NACTO holds roundtables, workshops, and webinars and conducts research on best practices and challenges for the growing bike share movement.

NACTO is a member of the Better Bike Share Partnership, a JPB funded collaboration between The City of Philadelphia, Bicycle Coalition of Greater Philadelphia, NACTO, and PeopleForBikes, to build equitable and replicable bike share systems.