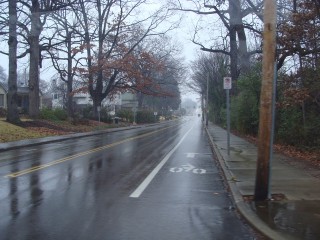 A Bike Lane installed in 2012 through Memphis’ Overton Park neighborhood

City transportation officials from Austin, Indianapolis and New York gathered on January 24-25, 2013 in Memphis, Tennessee to envision the role bicycling will play in the city’s future growth and development. The event, a Cities for Cycling Road Show that took place over the course of two days, consisted of a series of peer-to-peer dialogues and presentations by the visiting cities to local elected officials, city leaders, and engineering staff from the city and the region. The Road Show was held at Memphis City Hall and the Crosstown Arts office, where a design charrette offered visions for redesigning the Cleveland Street corridor adjacent to the Sears Crosstown building redevelopment. 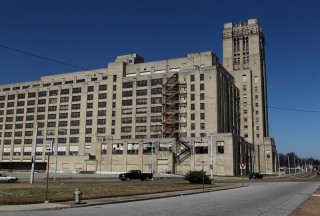 The redevelopment of the Sears Crosstown building has spurred an effort to regenerate the surrounding streets and public spaces. During the 2012 event “Memfix,” a cycle track was painted on the street to demonstrate the prospect of transformation. Credit: Memphis Daily News

Kyle Wagenschutz, the Bicycle Coordinator for the city, remarked, “Memphis has kicked off one of the most ambitious cycling programs in the nation for a city of its size and land use. While Memphis may not be New York or Copenhagen, our city’s success may serve as a barometer for how bicycling will fare and translate in this nation as a whole. The Road Show was our opportunity to learn from those that have come before us, and hopefully, to use those lessons to make our streets safer not only for cyclists, but for everyone using them.”

The Road Show was the sixth event in NACTO’s Cities for Cycling Project, with prior events held in Boston, Philadelphia, Baltimore, Chicago, and Atlanta occurring over the past three years. David Vega-Barachowitz, the Sustainable Initiatives Program Manager at NACTO, says, “These Road Shows are special because they promote a sense of mutual competition among cities. When city officials in Atlanta or Memphis see the transformations happening in Chicago or Boston, they feel a need to catch up, or even try to overtake their peers. This peer pressure creates a domino effect that benefits everyone and fosters a new normal in street design.” 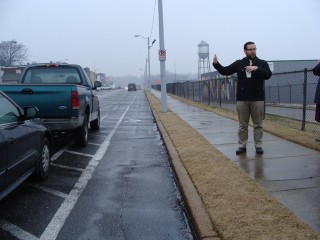 Kyle Wagenschutz, Memphis’ Bicycle Coordinator, explains how a local effort to create cycle tracks has reinvigorated a once dreary stretch of the city.

Annick Beaudet, the Bicycle Program Manager in the city of Austin’s Neighborhood Connectivity Division within the Department of Public Works, added, “Austin has made some tremendous strides over the past five years and we were excited to be able to share our story as part of the Road Show. While many people may think of Austin as a left-leaning university town, the reality is that the city has tremendous challenges to overcome both in terms of land use and sprawl. The Road Show proved to not only an opportunity to share, but also to learn and reflect on how as cities we must face these common obstacles together.”

Jamison Hutchins, the Bicycle Coordinator for the City of Indianapolis, expressed some thoughts on the innovations that have taken place in cycling over the past few years. “The Indianapolis Cultural Trail, a two way cycle track through the heart of the city, has changed the way people think of our downtown and spurred unprecedented economic development in its wake. Cycling is at the center of how we are redefining ourselves as a city and part of our economic strategy to market ourselves to young people and newcomers. As a city similar in size and environment, Memphis will challenge us to keep pushing our program to new heights.”

Jon Orcutt, Policy Director at the New York City Department of Transportation, shared New York’s success story, highlighting how the city has boosted cycling levels through infrastructure investment, data-driven policies, and its CitiBike program, slated to open in Spring 2013. Martha Roskowski of the Green Lane Project, for which Memphis is a focus city, also presented to the city, having led a delegation of city officials on a study tour through the Netherlands in 2012.

NACTO will continue its Cities for Cycling Road Show series in Austin and Indianapolis in spring and summer 2013.