In 2018, people took 84 million trips on Shared Micromobility in the United States, more than double the number of trips taken in 2017. 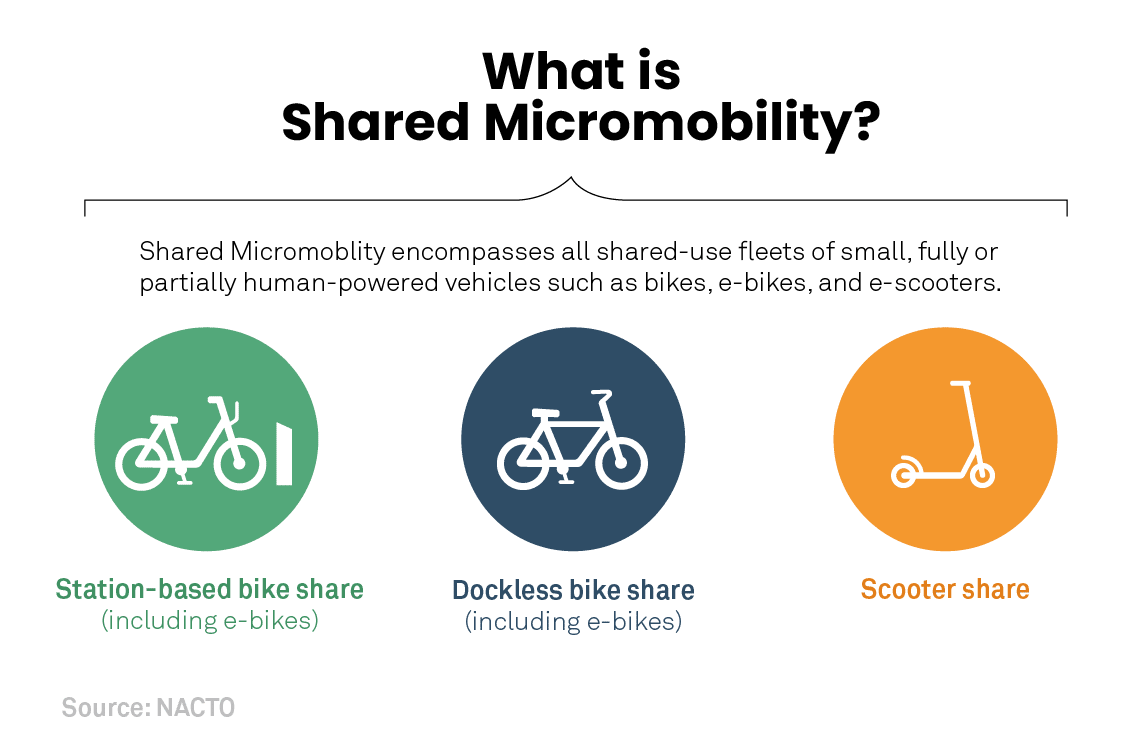 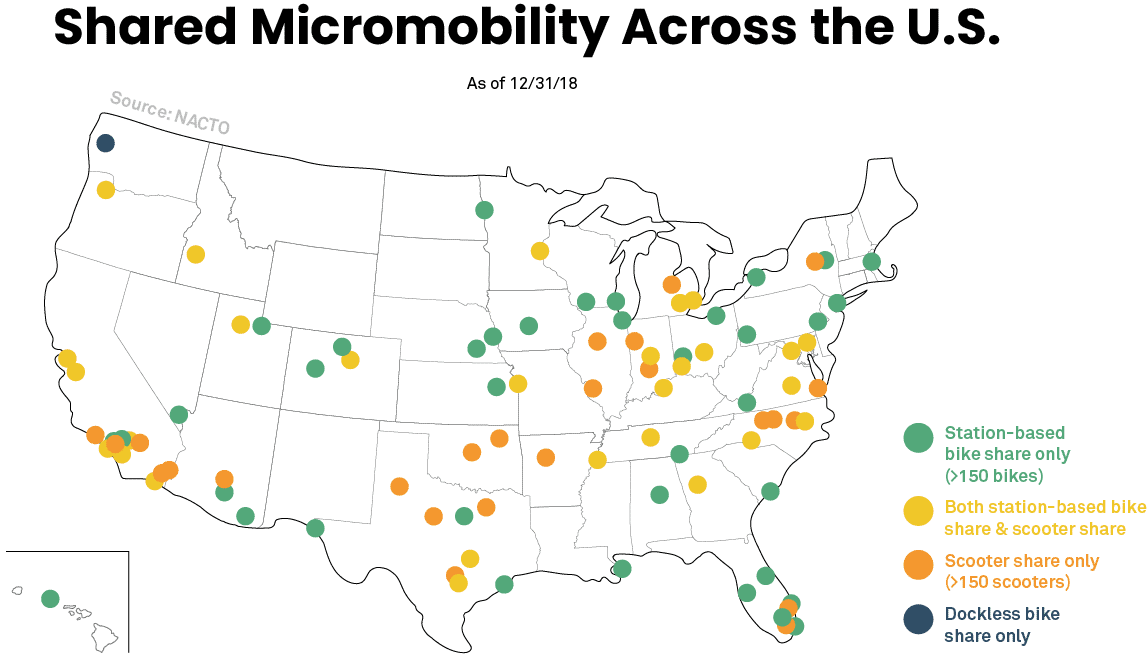 Dockless pedal (non-electric) bikes, which quickly proliferated across the U.S. in 2017, have largely disappeared from North American cities, with just 3 million trips in a handful of cities in 2018.

E-bikes emerged as a popular option, accounting for 6.5 million trips in 2018 (6 million in dockless systems and 500,000 in station-based systems).

Since 2010, people have taken 207 million trips on shared bikes and e-scooters. 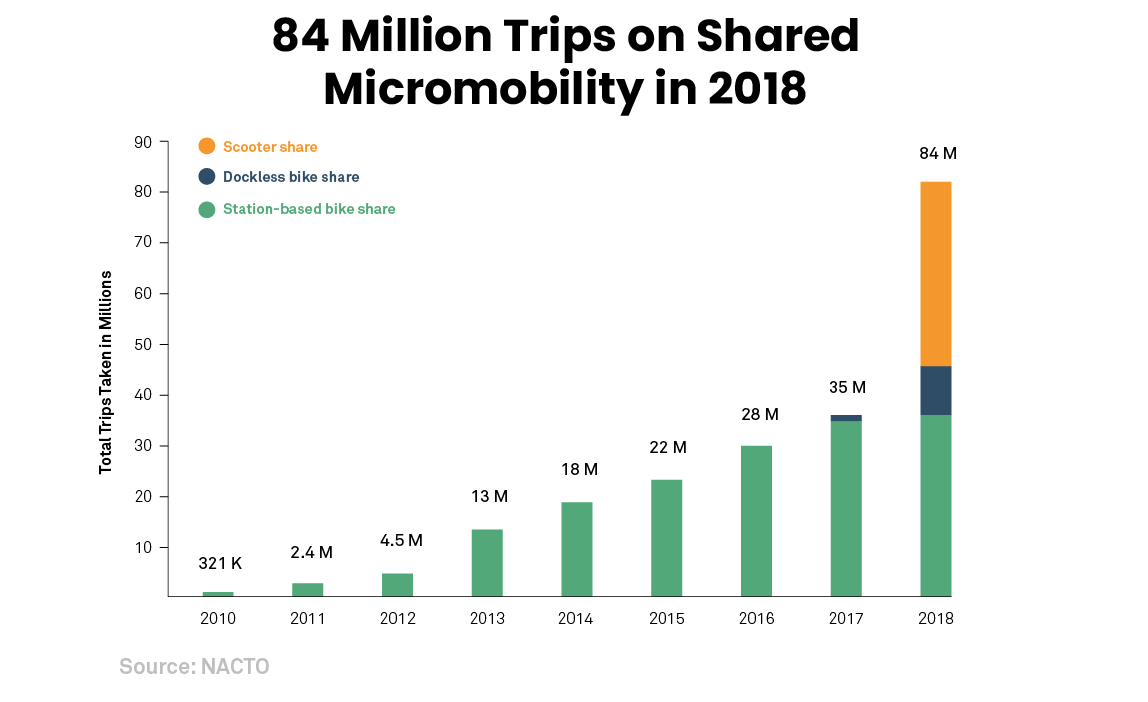 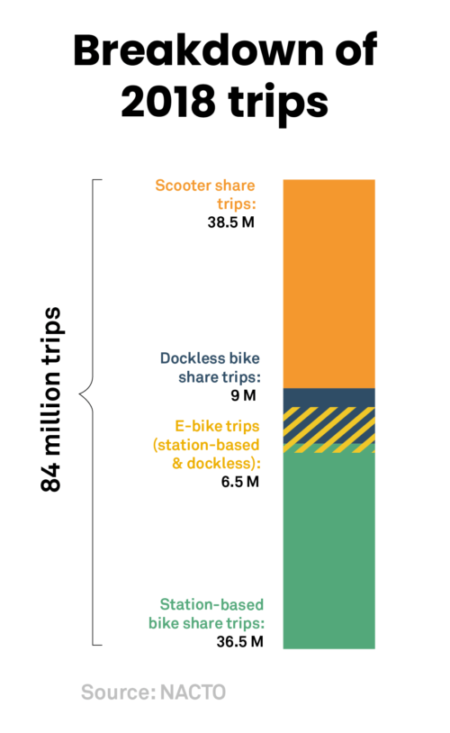 In 2018, e-scooters overtook bikes as the preferred vehicle for dockless vendors. As of the end of 2018, over 85,000 e-scooters were available for public use in about 100 U.S. cities. In contrast, dockless bikes, which once numbered in the tens of thousands, have largely disappeared from city streets, with the notable exception of dockless bikes still in use in Seattle.

Over the course of 2018, most dockless bike share companies (including Lime and Spin) retooled their fleets to focus on e-scooters, and new e-scooter-only companies (including Bird) emerged. Early e-scooter adopter cities include Santa Monica and Austin, and e-scooter companies expanded to many more cities from there, with about 26 formal e-scooter share pilots across the U.S. launching between July and September. 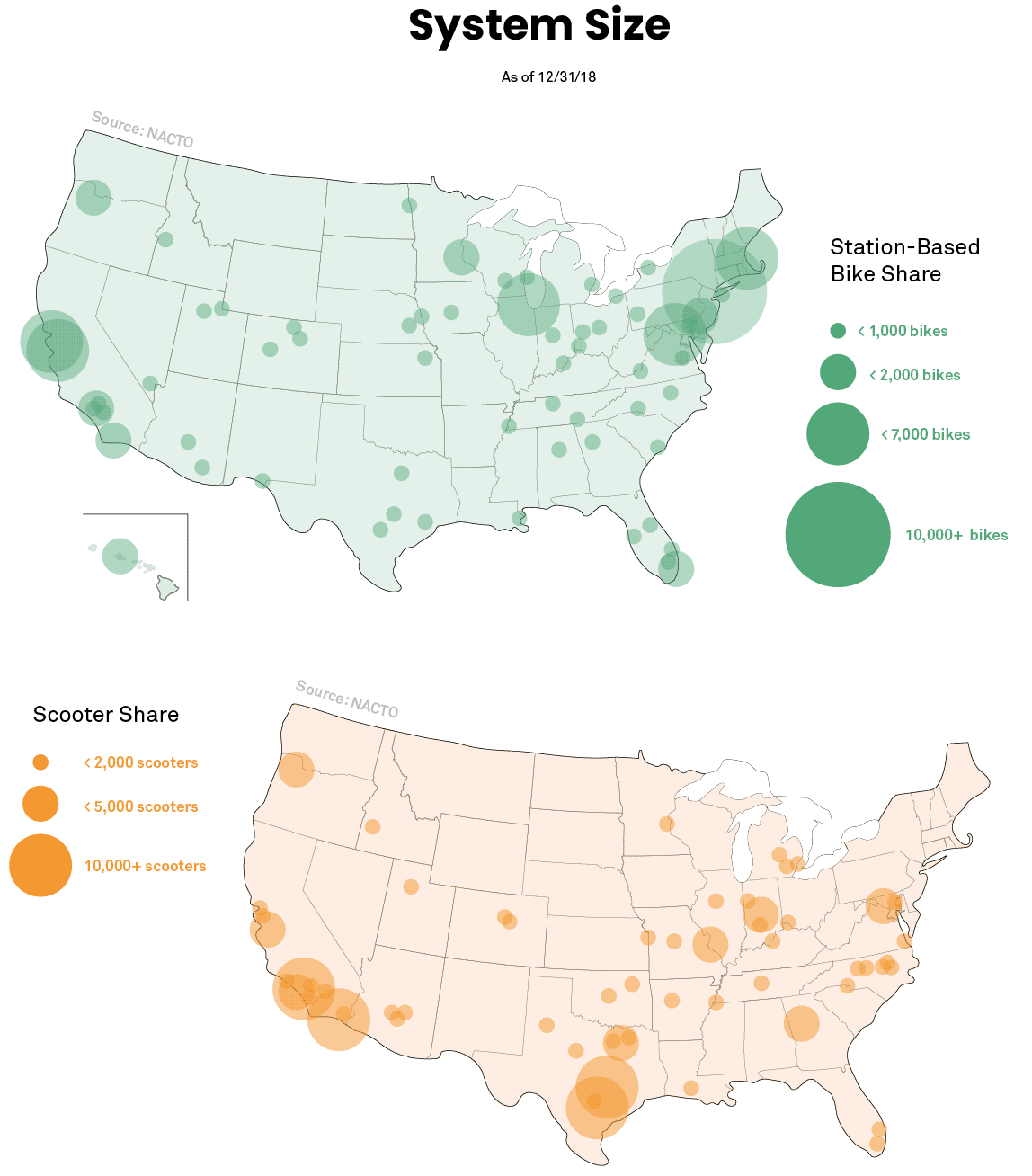 More than twice as many trips – 84 million – were taken on shared micromobility in the U.S. as compared to the year before.

The six cities with the highest ridership account for 84% of all station-based bike share trips in the U.S., similar to prior years. E-scooter ridership similarly is concentrated in a small number of cities: 40% of all e-scooter trips took place in the Los Angeles, San Diego, and Austin regions. 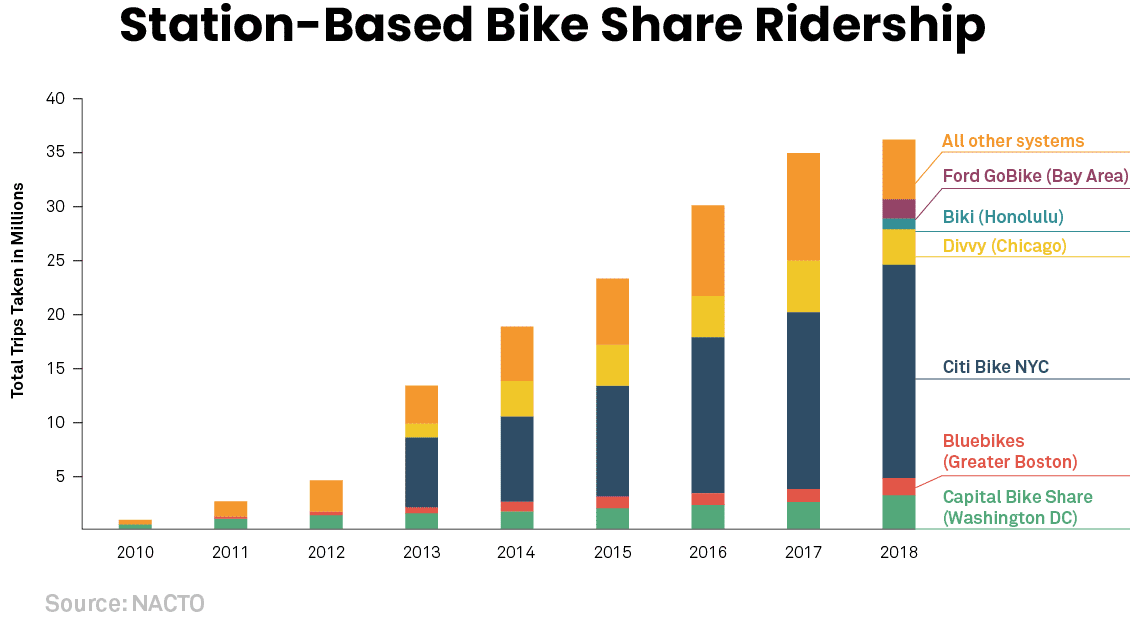 Why people are riding depends on what they’re riding.

NACTO’s analysis of ridership data shows a marked difference between the riding patterns of annual or monthly pass station-based bike share riders and day-pass/single-trip or casual bike share riders. In general, annual/monthly pass holders are more likely to ride during traditional rush-hours, suggesting that they are using the system for commute trips. In contrast, day/single trip riders are more likely to ride in the middle of the day and on weekends, and for longer periods of time, suggesting social, shopping and other recreational use. 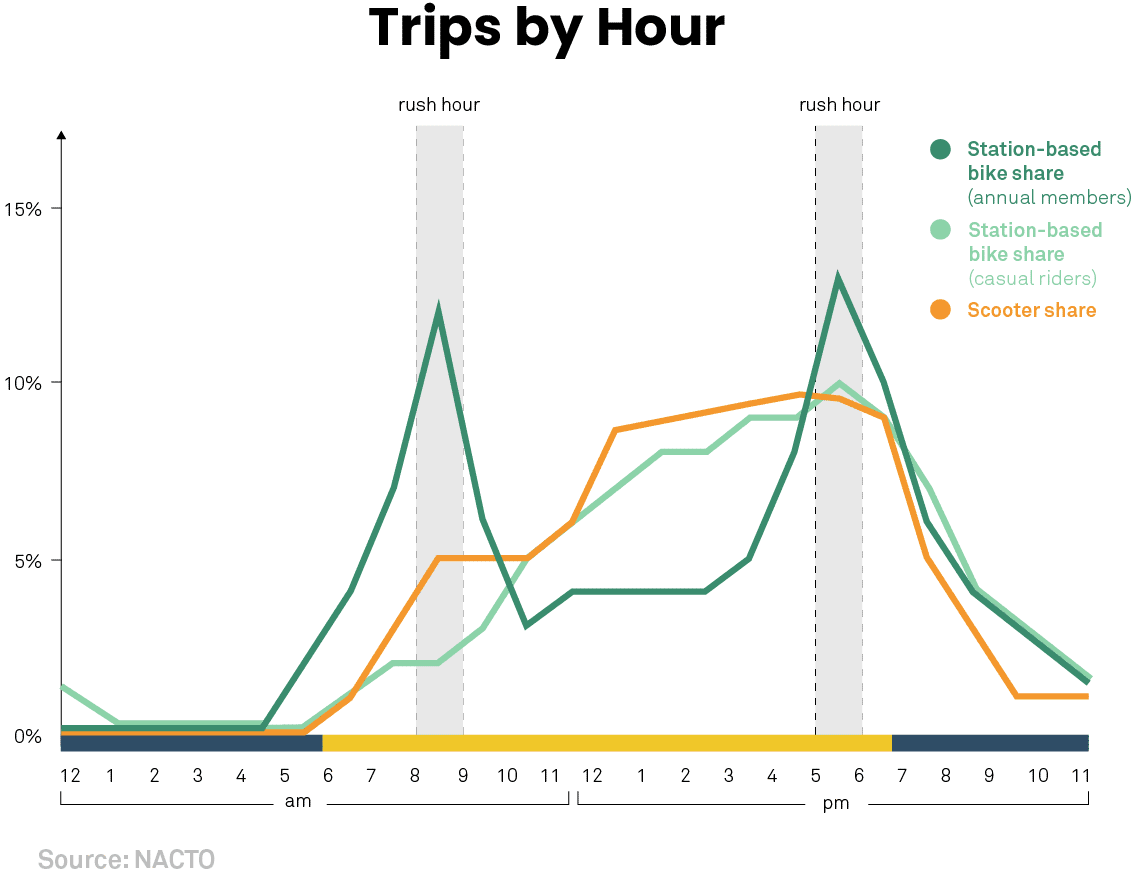 Data from Washington, DC and Portland, OR, suggests that e-scooter share use more closely mirrors that of social, shopping and other recreational bike share use. Average peak usage for e-scooters begins around 11AM – 12PM and continues throughout the afternoon into early evening. E-scooters are used throughout the week but use is highest on weekends. In contrast, aggregated data from station-based systems shows ridership peaking at rush hours and during the week. 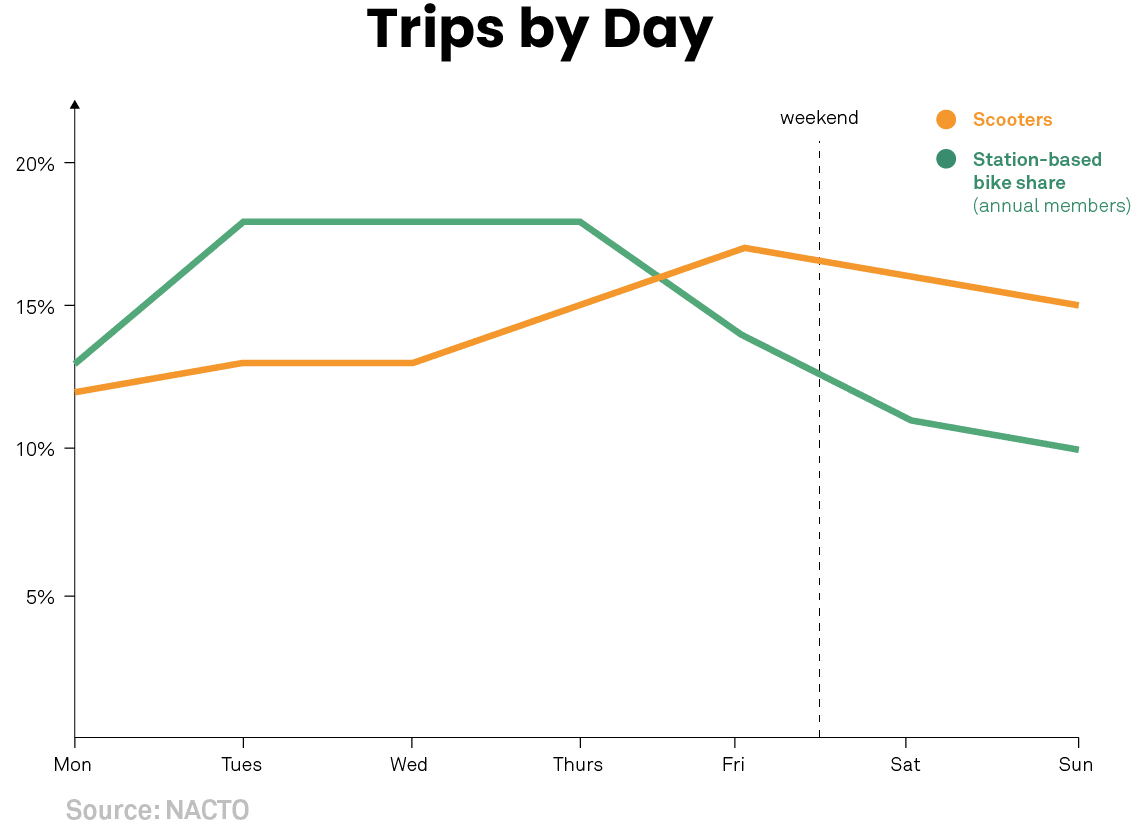 Survey data from a number of cities also shows a difference in why people choose to ride. People using station-based bike share are more likely than people using e-scooter share to report that they ride to get to/from work and to say that they use bike share to connect to transit. 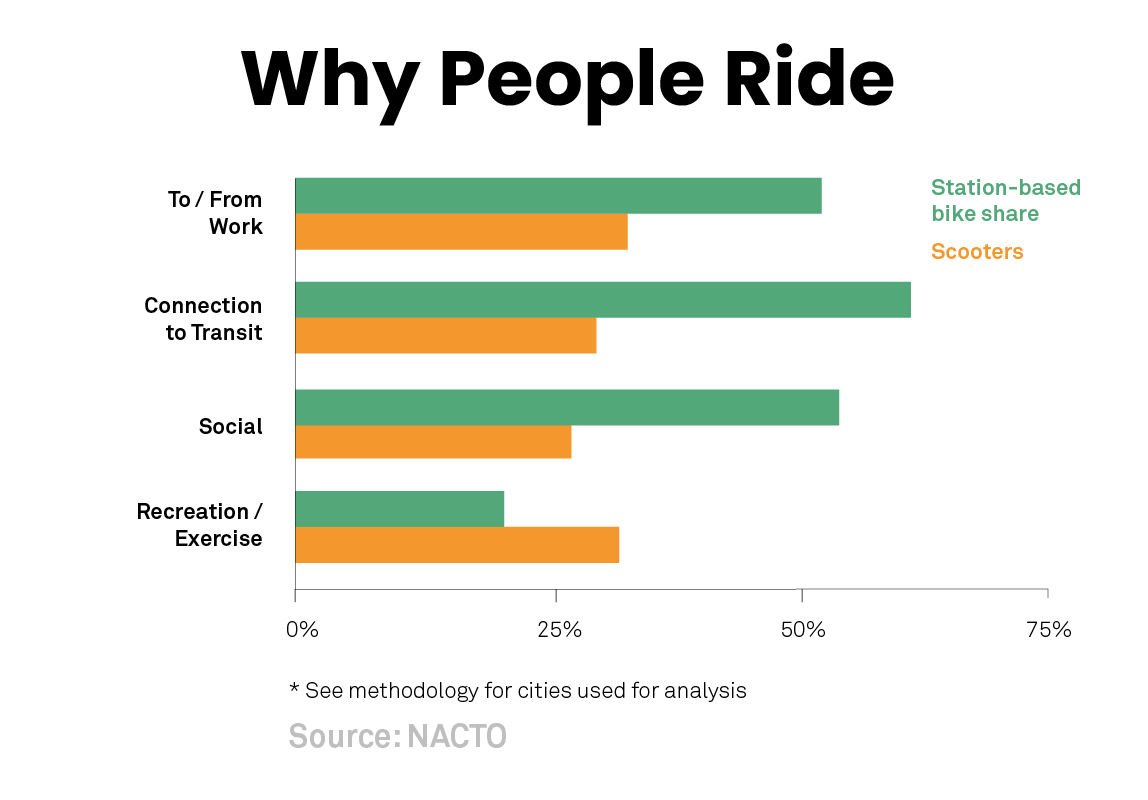 E-bikes are popular where they are in use.

Across the country, the vehicles that have the highest use-frequency (measured by rides/vehicle/day) are e-bikes. Cities that added e-bikes to their station-based fleets report that, on average, e-bikes are used twice as frequently as pedal bikes. For example, in New York City, e-bikes are used up to 15 times a day during high ridership months (compared to around 5 times a day for pedal bikes). With e-bikes’ popularity apparent, bike share companies are now rapidly adding e-bikes to their fleets. In San Francisco, e-bikes were introduced in May and comprised a third of the fleet by the end of the year. Looking forward, Minneapolis plans to transition its entire docked fleet from pedal to electric vehicles, while New York City is working towards a fleet that is a third electric.

The average cost per trip varies widely depending on the system type and amount of use per typical rider.

On average, annual members in station-based bike share programs paid $1.25 per ride, compared to $2.75 per ride for casual users, and $3.50 per e-scooter share ride.

Cities have required bike share and scooter companies to offer discounts for low-income residents as a condition for operating in the public right-of-way. By the end of 2018, 30% of bike and e-scooter share systems provided membership discounts for people with low incomes. In station-based systems, the majority of these programs offer unlimited trips for $5/month. In addition, 17% of station-based systems provided cash access options. For scooters, the available discounts vary by company and by market within the same company, and are unevenly advertised.

In 2018, over half of Ford GoBike users in Oakland took advantage of an option to link their transit card to bike share, making payment more seamless across systems. In Pittsburgh, HealthyRide members receive a free 15 minute transfer between bike share and the bus.

The largest bike share systems are more heavily utilized, on a per-bike basis, than smaller systems.

Rides per vehicle per day is an intensity metric used to show frequency of use for bike share systems. For comparison, we’ve expanded the use of this metric for e-scooter share.

Data from over 30 different cities shows that ridership varies greatly by city and by the number of vehicles available. Rides per bike per day and rides per e-scooter per day (abbreviated to rides/vehicle/day or r/v/d) vary from less than 1 r/v/d to a little over 4 r/v/d. Ridership is impacted by factors such as availability of low-stress bike lanes, station density, how well bike/scooter share is integrated into the wider transportation network, and the extent of rider outreach and education undertaken by the vendors. 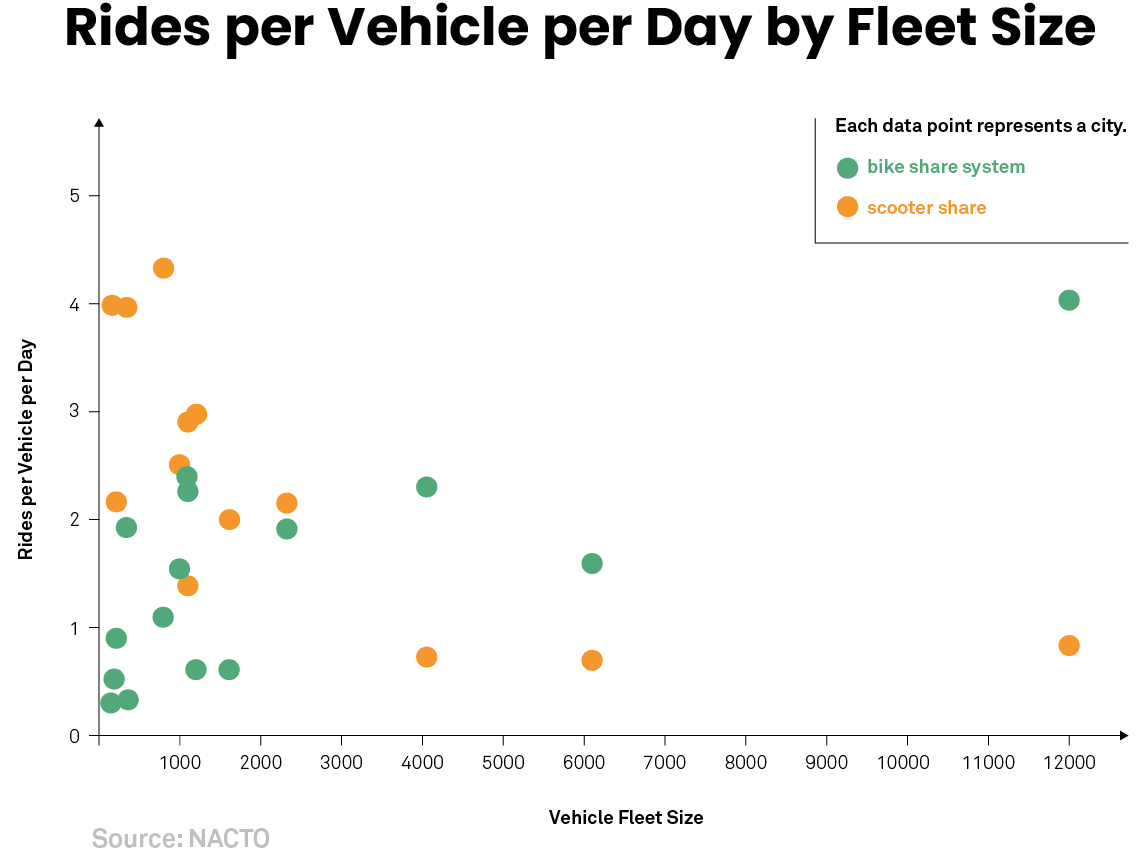 While data is limited and inconclusive, e-scooters do not yet appear to benefit from a network effect, and the largest fleets of e-scooter on city streets had lower ridership per vehicle than smaller fleets, an inverse of the trend for docked bike share systems.

In 2018, the volatile nature of the dockless landscape left some cities in a vulnerable position. For example, Camden, NJ, aiming to expand transportation options for low-income residents, welcomed Ofo, a dockless bike share company, onto its streets in early 2018. However, two months into their six-month pilot, Ofo abruptly left the city, leaving Camden without a bike share program and leaving behind a fleet of abandoned bikes, which had to be located, impounded, and disposed of by the city.

State-level legislation might hinder cities from managing their own streets.

In many states, e-scooters are not defined in motor vehicle codes, creating a legal gray area for their operation. In response, e-scooter companies are pushing legislation in many states to legalize e-scooter use. However, some state bills go beyond defining and legalizing e-scooters. As currently drafted, these bills would preempt city authority to regulate shared micromobility services. With this, cities could lose the ability to manage the activity on their own streets, hindering efforts to ensure that systems are safe and provide the most mobility benefits to the communities in which they operate.

As of the beginning of 2019, there were over 44 e-scooter bills introduced in 26 states.

NACTO counts all station-based systems with over 150 bikes. For purposes of clarity and analysis, smart bike systems, where the electronic components are incorporated into the bike itself, and use of a dock is often optional, are included in station-based share counts throughout the report.

For e-scooters, NACTO’s count includes all systems of more than 150 vehicles operating in one of the top 100 cities by population. NACTO does not include systems that operate solely or mostly on closed campuses such as universities or corporate campuses.

Data for dockless bikes and e-scooters was less consistent, and data quality and accuracy remains an ongoing issue with many companies. Cities have found discrepancies between what is reported by companies and what they find during spot checks. There is a growing conversation about data specifications and tools to audit and verify company-reported data that should shed additional light on ridership in 2019.

For information about rider behavior, NACTO combined publicly available trip data and survey data conducted by cities. Data for the ‘why people ride’ analysis was sourced from Denver, Portland, and Baltimore for scooters, and Washington DC, New York City, and Chicago for bike share. The social and recreation/exercise data points for bike share were available from Washington DC only. To date, there has not been a comprehensive, multi-city survey or census of the demographics of shared micromobility users.

For information about trip use profile, NACTO combined data reported by cities and operators directly to NACTO.

There is variance in how shared micromobility companies and regulators calculate rides per vehicle per day. For the purposes of this analysis, NACTO used the trip number data sets reported by cities or companies, number of days in operation, and number of reported vehicles.