Update (April 17, 2019): NACTO’s Newest Report, Shared Micromobility in the U.S.: 2018, updates these figures with 2018 ridership numbers, including on e-scooter systems. 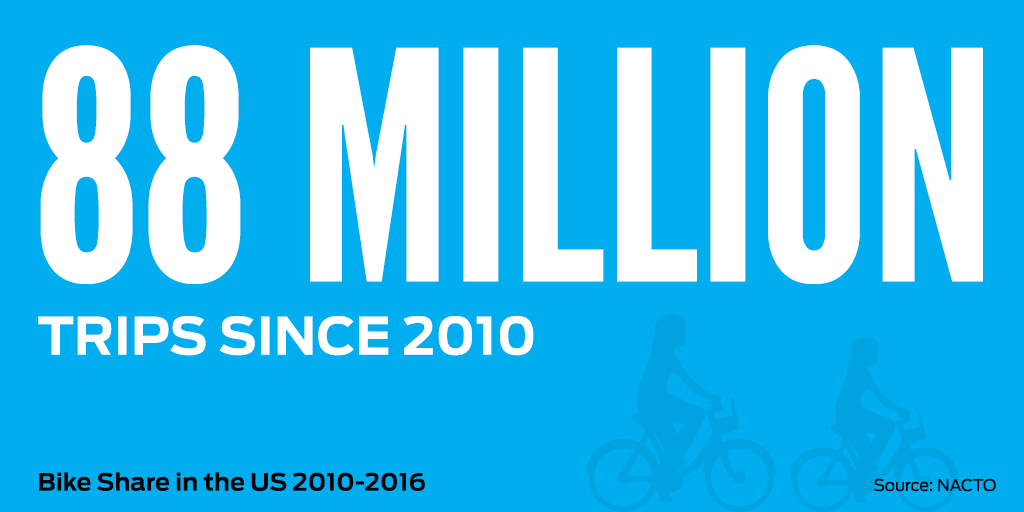 Bike share is growing at an astounding clip across the U.S., with over 88 million trips made on a bike share bike in the U.S. since 2010. In 2016 alone, riders took over 28 million trips, on par with the annual ridership of the entire Amtrak system, and higher than the number of people visiting Walt Disney World each year. 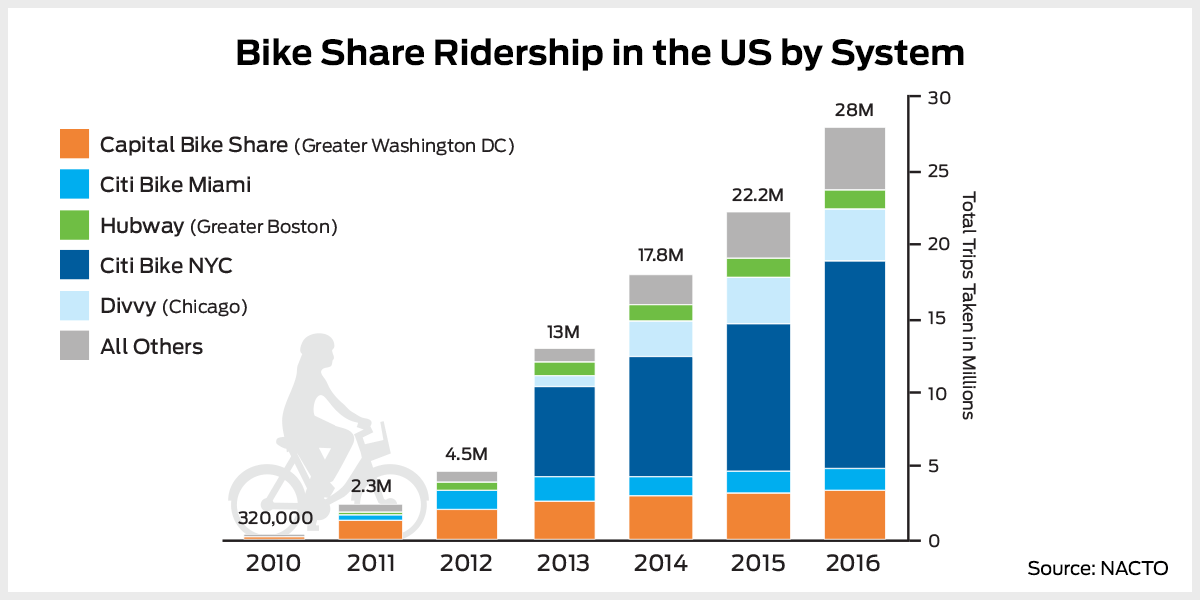 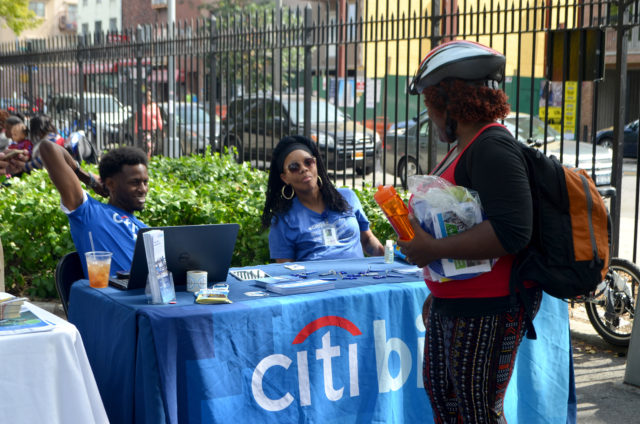 In some cities, community-based engagement has helped to drive this ridership. In anticipation of a significant system expansion in the area, the Bedford Stuyvesant Restoration Corporation, a trusted community-based organization, partnered with the bike share operator, the city, and other local organizations to champion Citi Bike as a way to address neighborhood concerns like health and food access. This effort increased membership in the majority-Black neighborhood by 56% while rides in the area more than tripled (overall ridership on Citi Bike increased 40% in 2016, to a total of 14 million trips).

The Number of Systems Continues to Grow

The number of bike share systems, defined as publicly-available systems with at least 10 stations and 100 bikes, has steadily increased year-over-year, from four systems in 2010 to 55 systems in 2016. In addition, 80% of systems that have been in operation for more than a year have expanded since they launched.

2016 saw the launch of two large systems in major cities: BIKETOWN in Portland, OR and Metro Bike Share in Los Angeles, CA. The number of bikes in the nation also increased substantially, up 30%, as existing large systems have continued to grow. 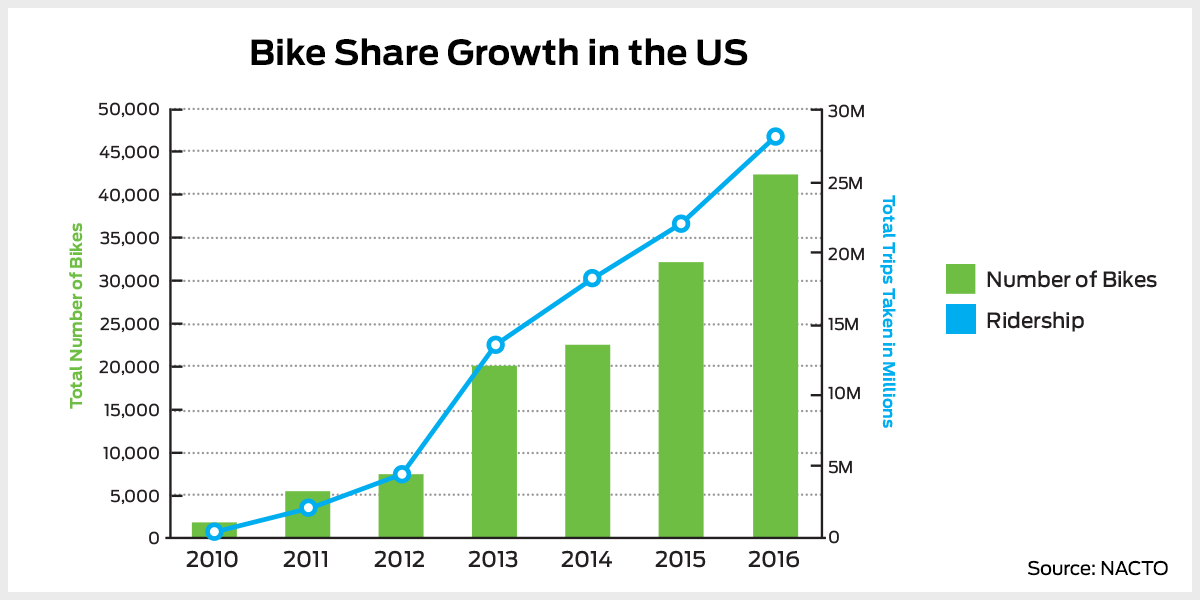 The first modern bike share systems in the United States launched in 2010, with 1,600 bikes across the country that year. The introduction of large systems in 2013, coupled with a proliferation of smaller systems, resulted in explosive growth: from just 7,400 bikes in 2012, to 19,900 bikes in 2013, and over 42,000 bikes in 2016. This has meant that one of the lowest-cost transportation options is available to more people nationwide than ever before. 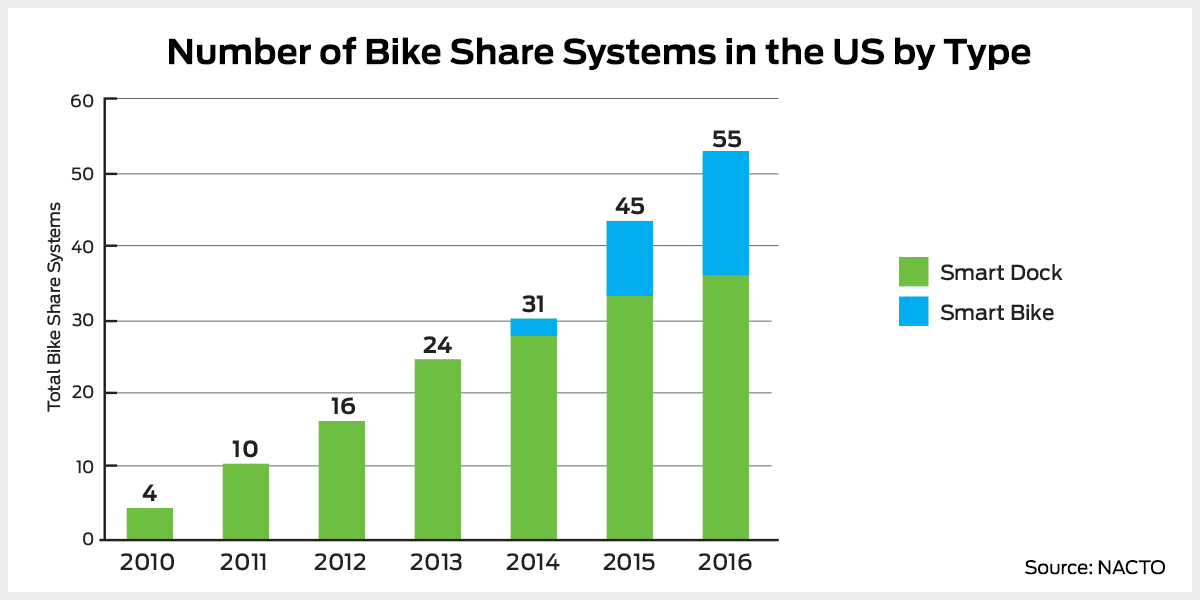 The popularity of smart bikes—which incorporate all of the necessary electronic components into the bike itself as opposed to the dock—has significantly increased since the first smart bike systems launched in the U.S. in 2014. The overall share of systems that use smart bikes has steadily climbed, and the vast majority of new systems that opened in 2016 rely on the technology. Nevertheless, most of the largest systems, including new ones, still use smart docks: while 31% of all systems used smart bike technology in 2016, only 13% of all bike share bikes in circulation were smart bikes.

Despite changes in technology and the growth of bike share, trip durations have remained short, particularly in larger systems that serve as an option for functional, point-to-point transportation and/or as an extension of the public transit network. On average, trips lasted 12 minutes for system members and 25 minutes for casual users. 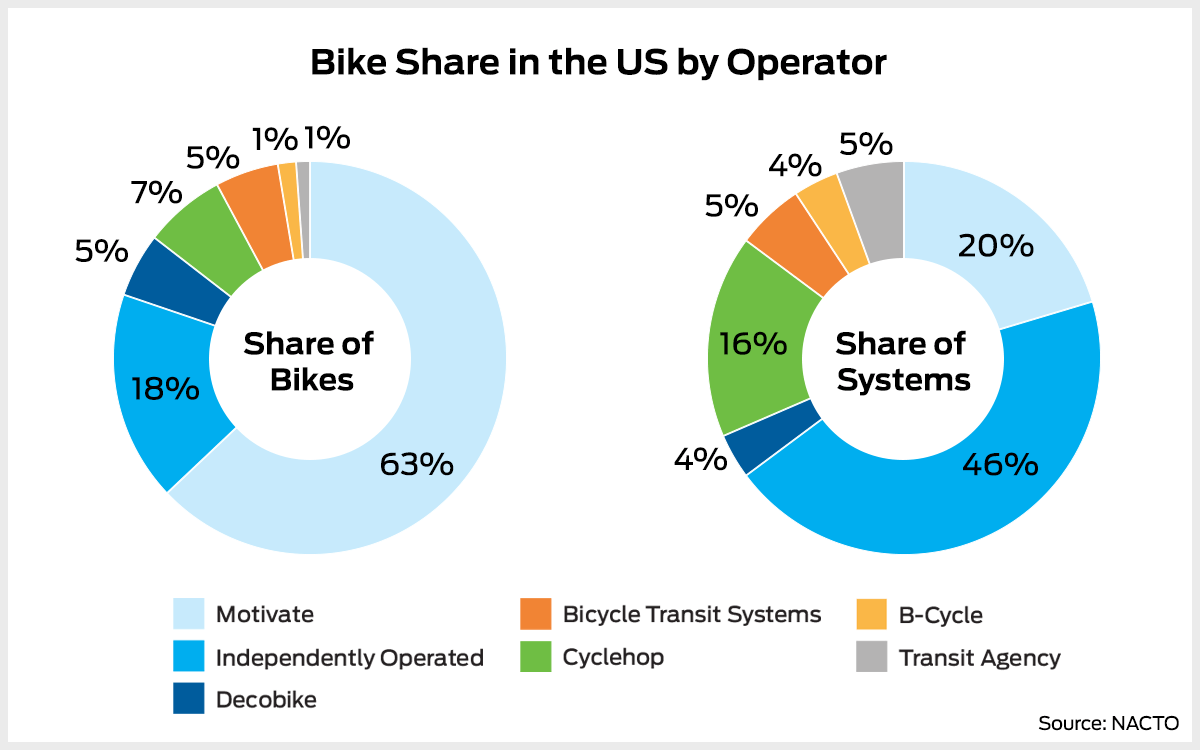 Much like they vary in bike technology, small and large systems differ in who’s operating them. While Motivate dominates the large bike share system market, being responsible for the majority of all bike share bikes in the U.S., smaller systems are much more likely to be independently run by small local organizations such as non-profits. 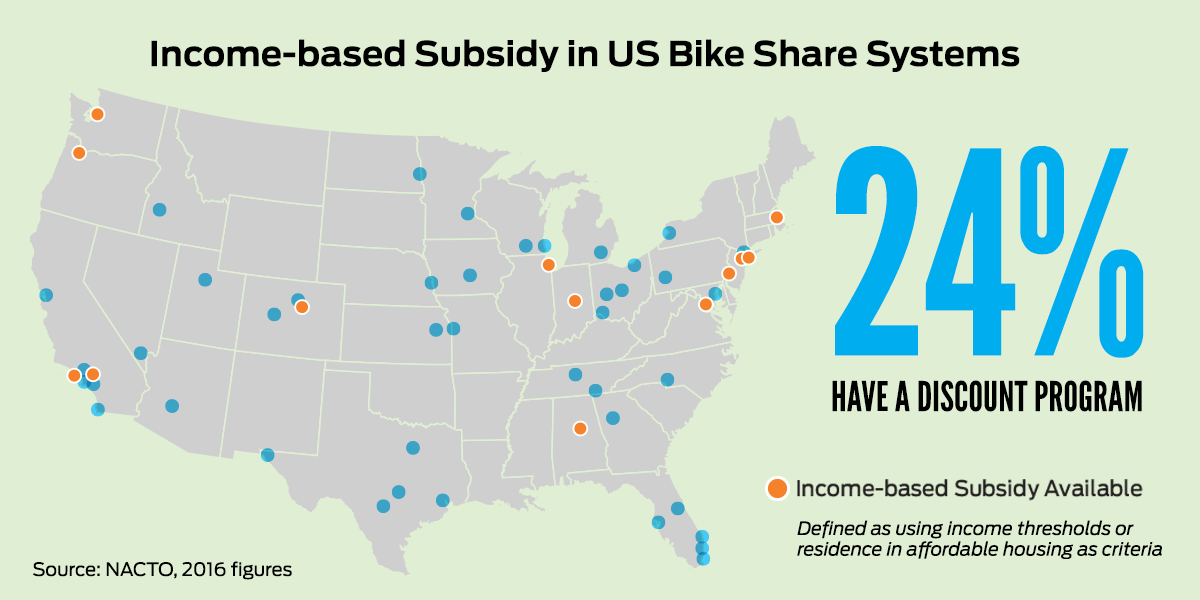 Creating programs that make bike share accessible to everyone, regardless of income level, is a key focus of cities around the country. Systems are increasingly making subsidized passes available to people with low incomes. 24% of cities have an income-based discount program, using income thresholds or living in affordable housing as criteria. (For this analysis, NACTO included systems that have both an ongoing funding source and are listed as a membership option on the system’s main pricing page). 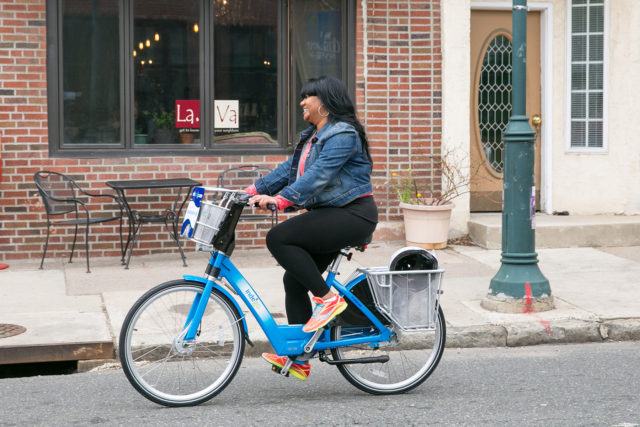 In 2016, Philadelphia’s Indego began its successful subsidized pass program, and West Hollywood and Portland, OR launched their bike share systems with such a subsidy from the outset. The method to determine eligibility varies, however—EBT cards, residence in subsidized housing, and the honors system are all used by different systems across the country.

These subsidy programs have had a demonstrable impact on who uses bike share. In April 2016, Indego launched an innovative AccessPass program, which provides $5 per month memberships to Philadelphians who use EBT cards payable with either a credit/debit card or cash. Since the AccessPass was introduced, new passholders are much more likely to be low income: the percent of people signing up for Indego and earning less than $35,000 per year jumped from 27% to 44%. Following Philadelphia’s success, a number of cities are looking to develop EBT-verified discount options.

The growth of bike share shows no signs of stopping. A number of U.S. cities, such as Detroit, New Haven, and New Orleans, have either selected vendors or are planning to launch systems, and many existing systems are also rolling out major expansions: New York’s Citi Bike is adding another 2,000 bikes, for a total of 12,000; Houston is more than tripling in size to over 100 stations; and the San Francisco Bay Area is expanding from a 700 to a 7,000 bike system.

The expansion and densification of systems across the country is helping move bike share towards realizing its potential as an integrated, low-cost part of city transportation systems. More people on bike share means that more people are saving time, realizing new opportunities for exercise and health, and finding it easier to access economic opportunities. The care that many cities are taking to deeply engage local communities, hire locally and intentionally, expand their bike share systems, build out protected bike lane networks, and create accessible pricing ensures that bike share provides opportunities for everyone in their cities, regardless of race or income.