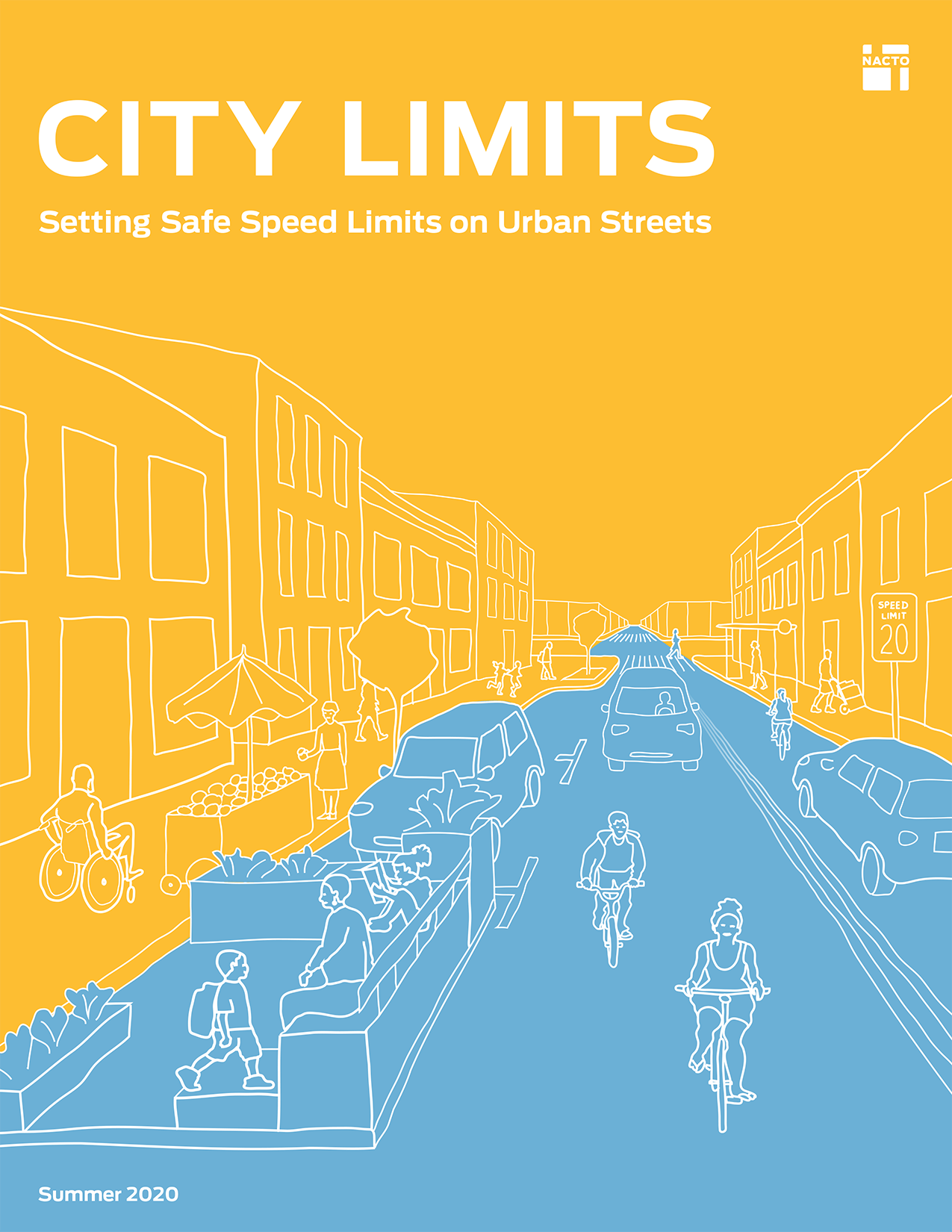 The National Transportation Safety Board (NTSB) has recommended an overhaul of how speed is managed on U.S. streets, including the way that speed limits are set. Answering this call, NACTO’s guidance, based on best practices from a wide diversity of municipalities across North America, gives practitioners the specific methods—at the level of an entire city or a single street—needed to set safe speed limits on streets.

The methods outlined in City Limits can be combined, and, unlike percentile-based approaches, each is context-sensitive, allowing cities to holistically evaluate who is using streets and how people are using them, from people walking and biking, to those taking transit or visiting a school. The guidance ranges from step-by-step checklists for conducting activity level & conflict density analyses, to nuanced metrics for documenting speeds that go beyond percentile-based speed setting practices.

In 2018, NACTO convened a working group of staff in 19 NACTO member cities to develop new robust guidance for setting speed limits on urban streets. The resulting guidance, City Limits, was completed in March 2020, when the COVID-19 pandemic began in the US.

The importance of safe speed limit setting has been underscored in recent months by effects from the coronavirus pandemic. As people traveled less during stay-at-home orders, speeds increased to even more unsafe levels. In May, traffic across the U.S. was 41% lower than pre-pandemic volumes, yet crashes only dropped 21%, meaning each trip was riskier.

NACTO is releasing City Limits now, amid the pandemic, to support city efforts to make streets safe for everyone. The need for this guidance existed long before the pandemic, and has only become increasingly relevant now, as cities face high speeds and still too many crashes.

“Slower is safer. In Minneapolis, we are lowering our residential speed limit to 20 mph, and our major streets to 25 mph because we know it will save lives. NACTO’s new guidance will help cities across the country use a modern, adaptive approach to speed limit setting that centers safety—not speed—as the primary goal. City Limits reflects intense effort from city staff who are doing the work every day, and provides expert guidance for cities to prioritize the safety of people traveling, especially our most vulnerable users.”
-Robin Hutcheson, Minneapolis Director of Public Works and NACTO President

“Among New York City’s very first Vision Zero accomplishments in 2014 were persuading our State Legislature to allow us to lower our default speed limit to from 30 mph to 25 mph and to expand our automated enforcement program. Both have been central to the progress we have made since then in reducing fatalities. Speed management is the number one priority in roadway safety. Vehicles traveling at safer speeds are far less likely to be involved in fatal crashes. I thank the team at NACTO for providing the detailed guidance of City Limits, an invaluable resource on how to achieve safer speed limits—and save lives on our nation’s streets.”
-Polly Trottenberg, New York City Transportation Commissioner

“The City of Atlanta is excited about the release of NACTO’s speed limit setting guidance. We recently adopted Vision Zero and legislated a default 25 MPH speed limit on certain city-controlled streets. This guidance has been and will continue to be beneficial in establishing safe speed limits on our urban arterial streets that feel and function like suburban roads, where using the traditional 85th percentile methodology will only lead to higher speed limits being set. NACTO continues to be a leader in urban street design and forges the way for many cities like us to create safer streets and move closer to realizing zero fatalities.”
-Josh Rowan, Commissioner, Atlanta Department of Transportation

“As vehicle speeds increase above 15 mph, crashes quickly get deadly. If you’re hit by a car at 15 mph, you’ll likely recover. At 45 mph, you’re dead. Reducing speeds is a critical step to saving lives. NACTO has elevated the importance of this necessary strategy. In California, we continue to pursue legislative action for setting rational speed limits. NACTO’s guidance provides national leadership on this critical issue.”
-Jeffrey Tumlin, Director of Transportation, SFMTA

“The traditional method of setting speed limits based on the 85th percentile ignores many realities of cities, particularly the connection to nearby land uses. We’re thrilled to support City Limits, which outlines methodologies for setting speeds that put the safety of people front and center. This guidance will help cities move from a percentile-based system that rewards unsafe speeding towards one that helps achieve a safer environment for everyone using city streets.”
-Joseph Barr, Cambridge Director of Traffic, Parking, and Transportation and NACTO Board Member

“Traditional transportation design has focused on designing streets and roadways for speeds that are generally inappropriate, especially in an urban context, contributing to unnecessary loss of life and serious injuries. Practitioners need guidance on reducing posted speeds and managing speed to improve safety for all users, especially vulnerable users such as pedestrians and bicyclists. This is an essential guide to support that goal.”
-Billy Hattaway, Transportation Director, City of Orlando

“A safe street is not one where safety is determined by how fast someone can comfortably drive, but rather one where a person can comfortably walk, ride a bike, and cross the street using a wheelchair. City Limits creates a framework to move beyond setting speed limits using the 85th percentile, to a place where cities can set speed limits that prioritize policy goals. Boulder is proud to have already adopted a 20 mph default speed limit across the city, and going forward we will be working to meet the intent of that policy and make our streets slower, and safer, for everyone.”
-Ryan Noles, Senior Transportation Planner, City of Boulder

“It’s crucial that cities inform and inspire each other as we work towards Vision Zero. I’m proud to work with cities that collaborate and bring the nation’s best ideas to their local communities. In Portland, we reduced the speed limit on most city streets to 20 mph in Portland with broad public support. By working together, we can save lives, while making our cities more vibrant and sustainable.”
-Chris Warner, Transportation Director, City of Portland, Oregon

“Addressing dangerous speeding is the only way for everyone to get around safely. As we design a transportation network that serves everyone, we have to prioritize saving lives as we manage our streets.”
-Sam Zimbabwe, Director, Seattle Department of Transportation

“From 2010 to 2019, most Washingtonians killed while walking or biking (87%) died on roads with a posted speed of 30 mph or higher. To tackle this critical problem, WSDOT is leading a multi-agency, multidisciplinary group working on a model policy addressing speed management for injury minimization. We know we need to apply design tools and create ‘self-enforcing’ streets that help drivers move at speeds appropriate to the context. We want to be a partner with our cities and counties in saving lives, and City Limits will help us work with them.”
-Keith Metcalf, Deputy Secretary, Washington State Department of Transportation

“Thank you to NACTO for publishing this guide, and elevating the significant relationship between speed and safety for all road users. “This guidance comes at an especially important time as the rate of fatal crashes has increased during COVID and we need safer speeds to prevent serious injuries and fatalities.”
-Stephanie Pollack, Secretary and CEO, Massachusetts Department of Transportation

“ITE congratulates NACTO on the development and publication of this important new speed management resource. Determining and achieving context-appropriate target speeds on urban streets is essential to the vision of zero fatalities and serious injuries.”
-Jeff Paniati, Executive Director and CEO of ITE

“The top priority in our nation’s transportation policy and program is to let vehicles go fast. It has filtered into every level of implementation, down to the way we set speed limits. We raise the speed limit to suit the speeders, as long as there are enough of them (and it doesn’t take that many). NACTO once again provides excellent guidance to practitioners who recognize the problem and who want to put safety ahead of speed.”
-Beth Osborne, Director, Transportation for America

“The soaring number of pedestrian deaths we’ve seen in recent years is a wake-up call for a new approach to vehicle speeds in urban areas. IIHS research demonstrates that lowering city speed limits curbs the most dangerous speeding and can make the roads safer for everyone who drives, walks, or bikes.”
-Jessica Cicchino, Vice President for Research, Insurance Institute for Highway Safety (IIHS)

“To advance Vision Zero, nothing is more important than managing speeds. For too long, cities have been hindered from setting speeds to promote safe mobility for all. This resource will help usher in a new day of safety on our streets, especially our most vulnerable—children, seniors, and people walking and biking.”
-Leah Shahum, Founder & Director, Vision Zero Network