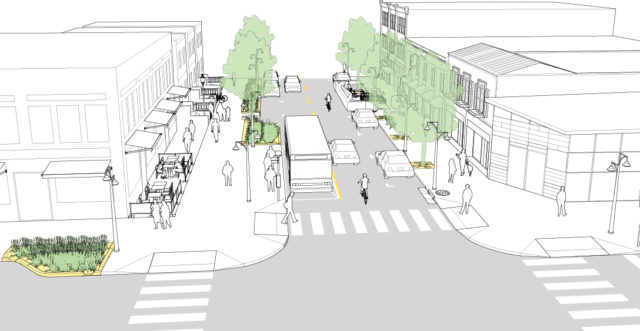 Neighborhood main streets are at the center of community life—they are conduits for social and economic activity, providing vital spaces to travel to and through. 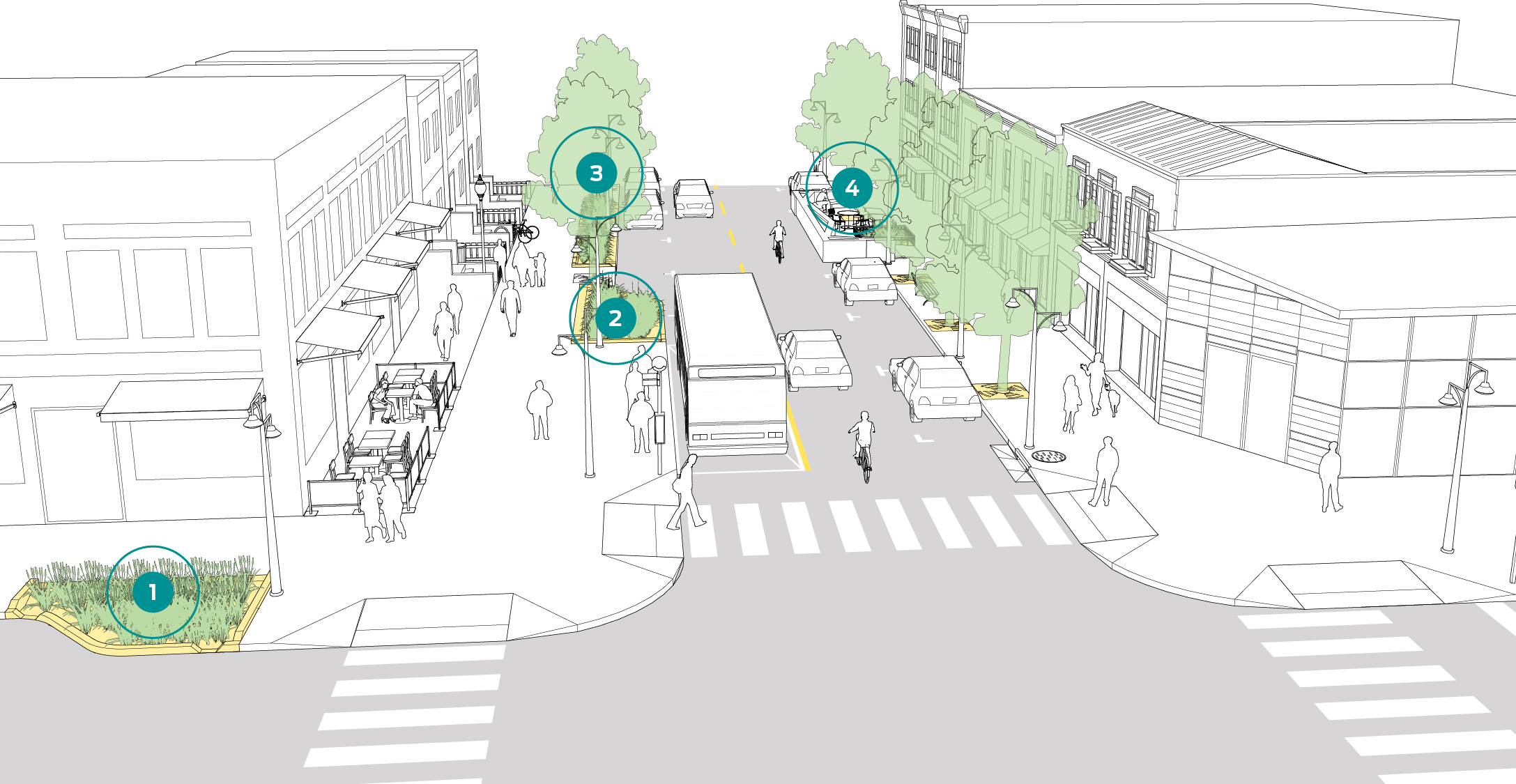 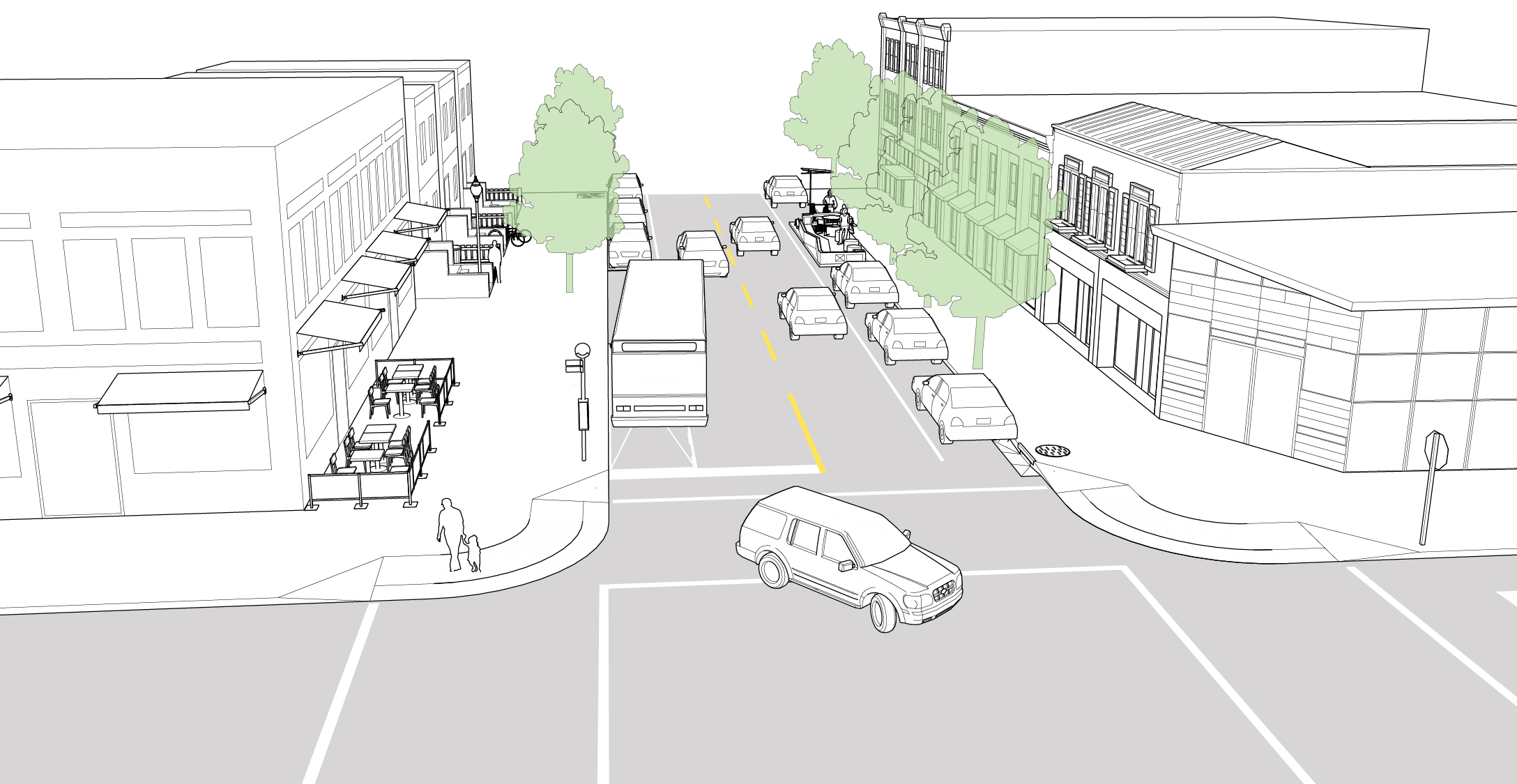 Adjacent property owners rely on effective stormwater management in the right-of-way to prevent damage caused by basement or building flooding.

Road diets and the reassignment of road space to bicycling and walking can improve mobility and safety by moving more people in less space and reducing left turn and rear-end conflicts among private motor vehicles and between motor vehicles, bicycles, and transit vehicles, while simultaneously unlocking street space for stormwater treatment facilities.

Curb extensions with bioretention facilities should be integrated at intersections and mid-block locations to improve pedestrian mobility and safety, shorten crossing distances, and calm vehicle traffic by narrowing the road. Bioretention cells can be sited throughout the block, though are most effective when sited near intersection corners to collect as much runoff from the tributary area as possible.

Transit boarding bulbs are an important opportunity to integrate green infrastructure, since sidewalk space is often not available and curbsides are at a premium.

Smaller green infrastructure treatments, such as bioretention planters, stormwater tree wells, or tree trenches, are more commonly used on neighborhood main streets due to space constraints and high foot traffic along the sidewalk and between the curb and storefronts.

The bioretention facility wall can incorporate seating and placemaking elements in the planting or furnishing zone, especially on main streets with significant foot traffic and active storefronts.

Successful and well-supported interim treatments such as parklets may be incorporated into capital reconstruction, and can create sites for bioretention and infiltration.

On busy pedestrian corridors, consider edge treatments around bioretention facilities, such as short fencing or dense plantings, to reduce the risk of people stepping in the planter.

Where local business activity generates heavy freight and delivery activity, GSI elements should be located and designed for compatibility with frequent curbside access. Site bioretention planters to allow for access to the sidewalk, including regular spacing and accessible paths through the planting strip. Consider reducing parking duration, shifting deliveries to off-peak hours, designating freight loading zones during specified hours, or siting designated freight loading zones around the corner on side streets to reduce conflicts and facilitate local business activity.

At food, entertainment, and retail destinations, collaboration with local business is often key to a successful GSI project. On these highly active sidewalks, more frequent cleaning of litter and debris from bioretention facilities should be expected. The aesthetics of stormwater facilities are often more important than functionality to abutting businesses and street users. Consider enacting maintenance agreements for debris removal and light weeding with specific businesses, business improvement districts, or merchant organizations to reduce costs and improve performance.

Bioretention facilities may need to be lined to prevent groundwater migration into adjacent structures, such as basements or utility duct banks.