The unprecedented funding unlocked in the infrastructure bill could be a turning point that enables the U.S. to address longstanding faults and shortcomings in the country’s transportation system. Directing funding to the right projects could improve everyday life for millions of people, with new sidewalks, more reliable transit, safer streets, and neighborhoods knit back together after past infrastructure projects tore them apart.

NACTO will closely monitor implementation of the IIJA, to ensure cities are well-prepared to use the funding to advance their climate, equity and public safety goals.

The Infrastructure Investment and Jobs Act: An Overview for Cities

On November 15, President Biden signed the Infrastructure Investment and Jobs Act into law. The $1.2 trillion bill covers many aspects of infrastructure from transportation to water to broadband to electricity, with over $567 billion going to discretionary and formula programs under USDOT’s jurisdiction between FY 2022 and FY 2026. The IIJA contains language from S.1913 or the Surface Transportation Reauthorization Act (SRTA), consisting of the EPW Committee’s highway title and the Commerce Committee’s rail title, to reauthorize the federal surface transportation program.

The majority of funding in the bill will flow directly to state transportation departments with a significant portion reserved for new, USDOT-administered discretionary grant programs. 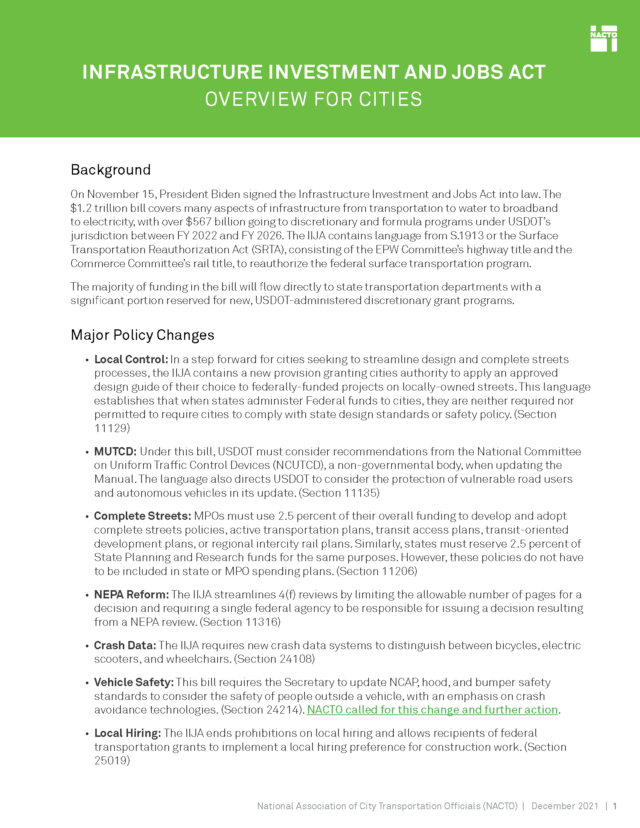 Read more in our IIJA Overview for Cities (pdf).

The IIJA creates over $150 billion worth of discretionary grant programs, giving USDOT an extraordinary opportunity to direct these new funds to projects that will advance safety, equity, and climate goals.

Read more in our overview (pdf).

May 16, 2022: The Biden Administration has unveiled its Safe Streets and Roads for All (SS4A) program, which provides urgently-needed transportation funding to local governments and targets the heart of America’s road safety crisis: street design. Read more here.