Why transportation? Why now?

To increase our chances for a livable, equitable future, with greenhouse gas emissions from transportation dramatically (and sustainably) reduced, it is urgent we shift a significant number of trips made in cars to lower-carbon modes, like walking, biking, and transit. Across the US, cities are the testing ground for this work. They are changing how their streets are designed—and used—by creating more options for people to travel safely and reliably without a car.

As one of the leading transportation partners in the American Cities Climate Challenge, NACTO spent the past 18 months advancing climate action through street design. We supported initiatives in ACCC cities by offering workshops, technical and policy guidance, and, in six cities, in-depth “Accelerator” support, which continued during the response to the COVID-19 pandemic. 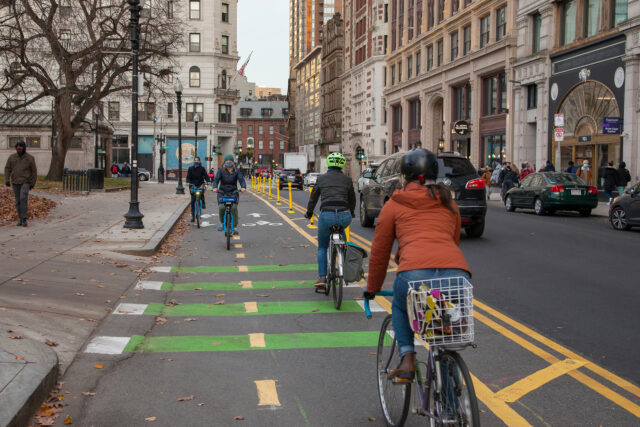 By integrating Climate Challenge and COVID-19 response and recovery efforts, cities were able to push boundaries and advance critical transportation projects such as:

Each project or policy advanced in a Climate Challenge city is a critical step in tackling the climate crisis, but progressing one project at a time will not, by itself, put us on a path toward mitigating transportation’s impact on the climate. To realize ambitious climate goals, cities need to scale project-level changes into transformative programs and, ultimately, low-carbon transportation networks.

By convening working groups in cities, and working hand-in-hand to eliminate roadblocks and streamline project delivery, ACCC cities are defining internal pathways to build multimodal transportation projects at scale. That’s where NACTO’s Accelerator model comes in. This progress sets a precedent that can be replicated in other Climate Challenge cities, across the NACTO network, and eventually more broadly across the US.

Denver staff used the Accelerator to scale up their neighborhood bikeway initiative and iron out project delivery protocols in a newly formed department. NACTO hosted a design workshop in March and continued providing support through the year, helping staff stay on track to implement their ambitious goals: Denver built 40 miles of bikeways in 2020, in a wide-scale implementation approach first tested in San José. Which city will be next?

Biking down a new protected bike lane in Denver, part of the 40 bikeway miles built by the city in 2020 (Credit: Denver DOTI)

In Atlanta, we hosted internal alignment meetings and technical workshops to help the city strengthen its own internal capacity to deliver high-quality multimodal projects with a new department. These events stoked interagency collaboration among city staff and helped bring the conversation around protected bikeways from “it’s impossible” to “it’s possible” to “we should do that.” With a Vision Zero Ordinance and five bikeway projects built in 2020—including the city’s first parking protected bike lane—results are already showing.

Getting agencies to be explicit with one another about project goals, and the designs needed to realize them, is necessary to realize a climate-forward shift on city streets. The Accelerator helped San Antonio and VIA commit to supporting transit through street design and reach alignment about the process for building complete streets projects. They are now ready to implement bus-only lanes on Zarzamora Street, the first on-street transit priority treatments the city has built in a generation.

In 2021, NACTO will continue helping city staff develop capacity and meet their climate goals. We’ll host workshops, facilitate the discussions that make progress happen, and bring to the forefront the capacity that cities have to make real change on the ground.

Even with new leadership in Washington, a livable future is not guaranteed. We’ll need to change the ways streets are designed, and the ways we use them, to have a fighting chance at realizing it. Cities’ actions during the Climate Challenge Accelerators represent a meaningful step in this direction: they are throwing the weight of their local governments behind fighting climate change, one bus and bike lane at a time.